Expat Life in Spain: some of my best articles to date

Looking for the truth about expat life in Spain?

You’re in the right place…

This humble blog has (as of early 2019) over 500 articles – and most of them are about the lives of expats in Spain.

In other words, articles about some of the people, places, foods and events in Madrid, Barcelona and in other parts of Spain.

I’ve been living here for quite awhile, so I know a thing or two about it.

And I’ve also got occasional guest posts from others who are experts in other areas.

My best articles about expat life in Spain

A lot of people get offended if a foreign person says anything bad about Spain. So I tried to humor them with a massive, viral list post: 32 reasons why I love Spain.

It’s pretty popular out there on the interwebs, and also totally true. I love Spain.

On the other hand, there are a few things I hate about Spain, which I talk about in this article.

(Updated: it looks like the EU might be changing things, and we may no longer have to worry about daylight savings time. I’ll keep you posted.)

I didn’t almost die on this train, but a lot of other people did – and not almost: Going to Galicia on the Train Macabre

The Spanish economy has fallen apart in the last several years. So a lot of young people have left. The situation has inspired not one, not two, but three articles: The Brain Drain in Spain, Flight to London and The Flight of the Party Girls.

And if you want to read an introduction to the idea of Spain’s terrible economy, check out the economic crisis.

Update, 2018: the economy is much better now… Thanks for asking. So these days, I’ve got an article about gentrification and the horrendous increase in rent prices. 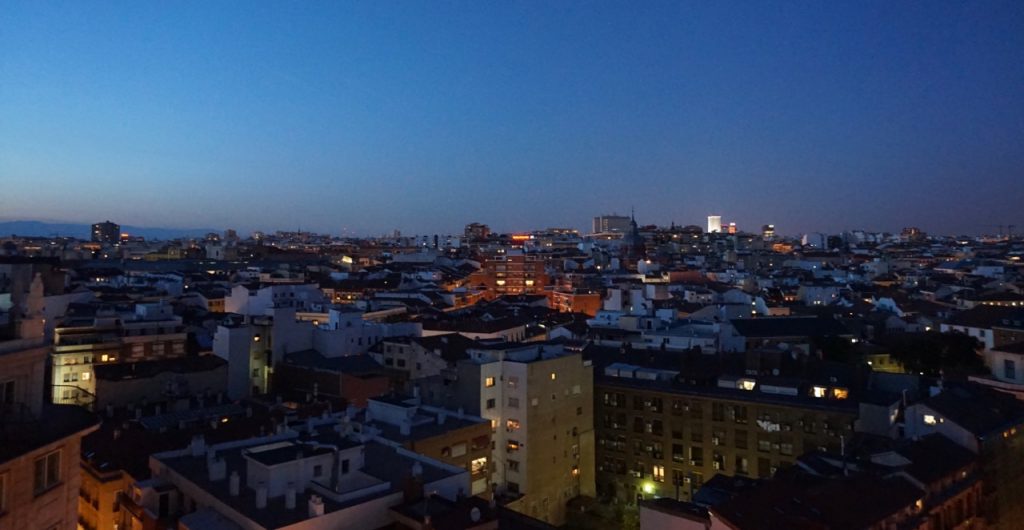 A bit of Madrid’s skyline, as seen from the roof of Dear Hotel in Plaza España.

Here’s another topic that might interest you, especially if you’re trying to torture your liver (and stomach) like I am…

Food, wine and places to eat in Madrid and Spain

I love Spanish food. Here are my top ten favorites.

(Not that I’m any sort of huge foodie. I just like eating.)

On the other hand, I don’t love the way the Spanish make “international” food. With that in mind, I wrote the article Dear Spain, stop ruining international cuisine.

And if you’re looking for local wine, Brian Murdock has an article about how Madrid wines are just as good as the ones from anywhere else in Spain.

And for a couple restaurants I like, check out the pork ear at Casa Toni and a place called l’Artisan, which isn’t at all Spanish, but is really good.

If you’re interested, I’ve also got an article about some really famous tourist traps and some better alternatives.

You know, places that won’t charge you an arm and a leg for nothing.

And now that I’m more in Barcelona, I’ve got a new one about my favorite restaurants in Barceloneta (my cute little neighborhood next to the beach).

Love and romance in Spain

My newest viral sensation is about (of all things) love. Check it out, right here: 7 things you should know before dating a Spanish girl.

And you could also check out 5 reasons why you should date a foreigner. Learning languages in bed is just one of the benefits!

And – depending on your definition of “love” – you might want to check out my article about sex in Spain. It gets a little bit wild in places.

Random Stuff about expat life in Spain and Madrid

I’ve got lots more on here. Check out The Spanish Coup Attempt of 1981 for a bit of real history (what was I thinking).

Or some of my more controversial articles: Summer is coming to Madrid: 6 things I’m excited about.

Or how about this one, which is guaranteed to offend no-one: Are Europeans more civilized than Americans?

Or maybe this one: 5 Reasons Why Living in Madrid is Awesome

And if you’re starting from scratch on Spain knowledge, check out Is Spain a country?

Photos of Madrid, Spain and Europe

I’m also on Instagram, and I hear that at least some of my photos are pretty sweet. If you want some more photos of Madrid (mostly) – as well as my travels around Spain and Europe, check out my feed here.

I’m publishing a couple of new photos every day – at least for now.

P.S. Since I offered to answer questions about expat life in Spain, I’ve been getting all kinds of things about legal issues, what town in Extremadura to move to, and much more. Like I said before, I’m not a huge expert, but if you write to me, I’ll try to point you in the right direction. Thanks for trusting in Mr Chorizo for all your Spanish lifestyle needs!