Taxis vs Uber – taxi strikes and the sharing economy in Spain

The other day I saw an ad for an app…

Your laundry, picked up from your house, washed, folded and dropped off again the next day.

I was a bit curious, and clicked through to the website. The web copy wasn’t very specific, but I got the idea it was basically an Uber for laundry.

Some random stranger in need of a few bucks takes your undies home, washes them, and brings them back. Saving you you all that time and effort, so you can pursue your true calling of playing Pokemon Go and eating Cheetos.

I imagine the tech whiz who came up with this idea.

The laundromat industry is plagued with inefficiencies.

And we’re going to disrupt it!

And in the meantime, we’ll live like kings off of venture capital and far-fetched monetization plans.

This is going somewhere, I promise.

The sharing economy and the death of old industries

This week here in Spain, taxi drivers are on strike. Lots of ’em.

It started in Barcelona last Wednesday. A lot of taxis are just parked on Gran Via, blocking all traffic while the drivers camp out under umbrellas.

Soon, strikes had spread to Madrid and other major cities.

The proliferation of Uber and Cabify’s black car services that are “stealing” their business.

I guess they sort of have a point.

Taxi drivers pay a lot of money for their licenses to drive a cab. The new guys in the black cars pay next to nothing. Taxi drivers pay their own social security and maintenance. 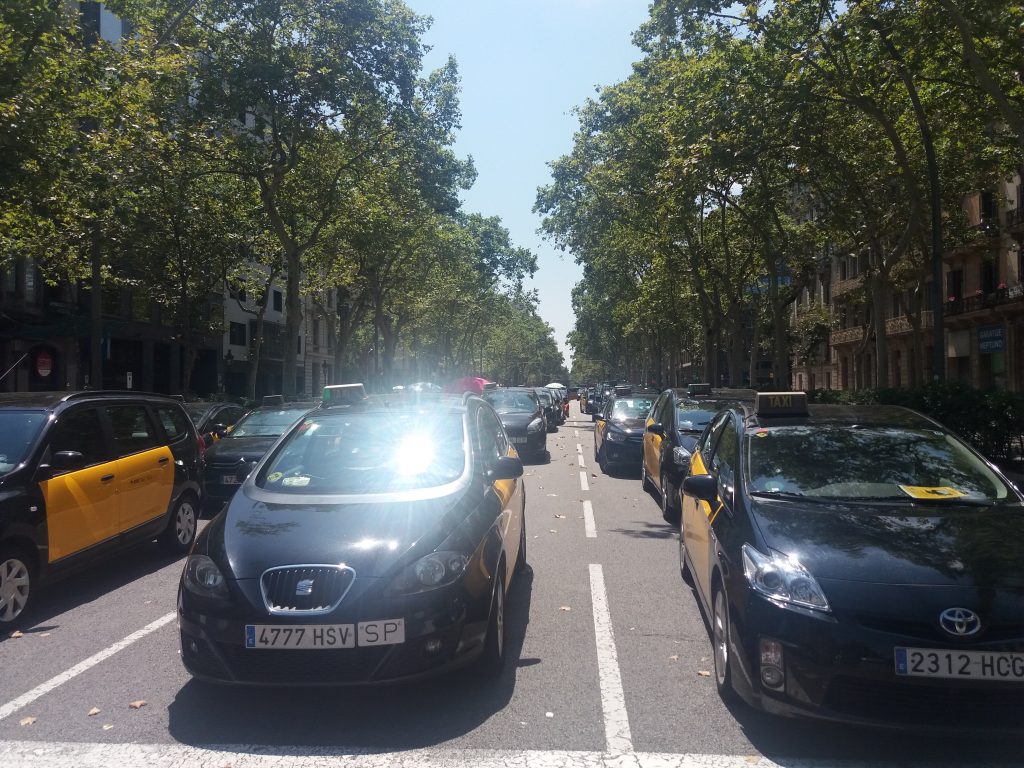 Taxis on strike yesterday in Barcelona.

(I guess I should note that in Spain, we don’t have random people driving their personal cars as Ubers. That’s prohibited by law, for now.)

Anyway, the taxis are pissed, and I guess they’re ready to fight the Uberization of their industry in any way they can. Some local governments are trying to limit the number of black car licenses, but the Supreme Court is making it difficult for them to do so.

What’s going to happen to the taxi drivers? The strike doesn’t seem to be going anywhere. Neither does Uber.

My guess is the taxi drivers will pressure the government into caving to their demands, limiting the number of black car licenses, and everybody will muddle through for a while longer…

Until some other disruptive technology comes along to ruin them for good.

Uber and Cabify aren’t the only companies coming up against some serious government regulation these days.

Last week Madrid took some big steps toward getting rid of AirBnB, passing a law that should make about 90% of rental flats illegal.

Will it work? Will they really have the funds to enforce it?

I have no idea.

But I have a feeling the AirBnB effect isn’t just going to disappear.

And neither is the sharing economy as a whole. Technology is going to keep disrupting everything.

Is this actually a new phenomenon?

Apparently, they saw it as some sort of bourgeois plot to make working-class women lazy. Plus, I bet it was pretty disruptive to the wooden-bucket-and-washboard industry way back then. Did the bucket-makers strike, shutting down major cities?

I’m really not sure.

In any case, I guess the new economy’s not all bad, either.

There are certainly people who are renting rooms on AirBnB to help with their own personal expenses, and benefiting greatly. Uber and Cabify give work to people who can’t afford to pay 100,000€ for a taxi license.

And looking on sites like Upwork, I see that there are plenty of people doing web design and other high tech jobs from their small towns around Spain.

I imagine that if you wanted to be a web designer a decade ago, first you’d have to get the hell out of Soria. Now you can stay, home enjoy a lower cost of living, and bring tech money back to your local economy.

Seems like a lot of wins. And also some losses. Like just about every other social change.

So let’s see what happens.

At least until the sex robots take over.

P.S. I spend a lot of time thinking about things like the inevitable rebellion of super-intelligent sex robots these days. What do you think? Is it time to start preparing for the AI apocalypse? Stockpiling bullets and building bunkers so we can go underground, Terminator style? Or are we already living in a simulation, Matrix style? Let me know, right here in the comments… Thanks!