Living in Barceloneta – scenes from daily life at the beach

And living in Barceloneta seems like a good choice, so far.

It’s active, full of different kinds of people, and very near the beach.

I guess any day I’ll start posting those douchy photos in which I pretend to be working with my laptop on a beach chair, while drinking some stupid sugary cocktail and being fanned by a few YouTube groupies.

Today, though, I wanted to show you some scenes from my new barrio.

So here, without further ado…

Living in Barceloneta: Outside the Market

Walkers and crutches propped up between the tables.

A couple of middle-aged women go from table to table trying to sell dresses to the abuelas. They appear to know everyone out here. (Every non-touristy looking one, at least.)

They hold up the big, flowery old lady dresses on hangars, and there’s a lot of oohing and feeling of the material.

A couple of blonde girls wander by on their way to the beach. 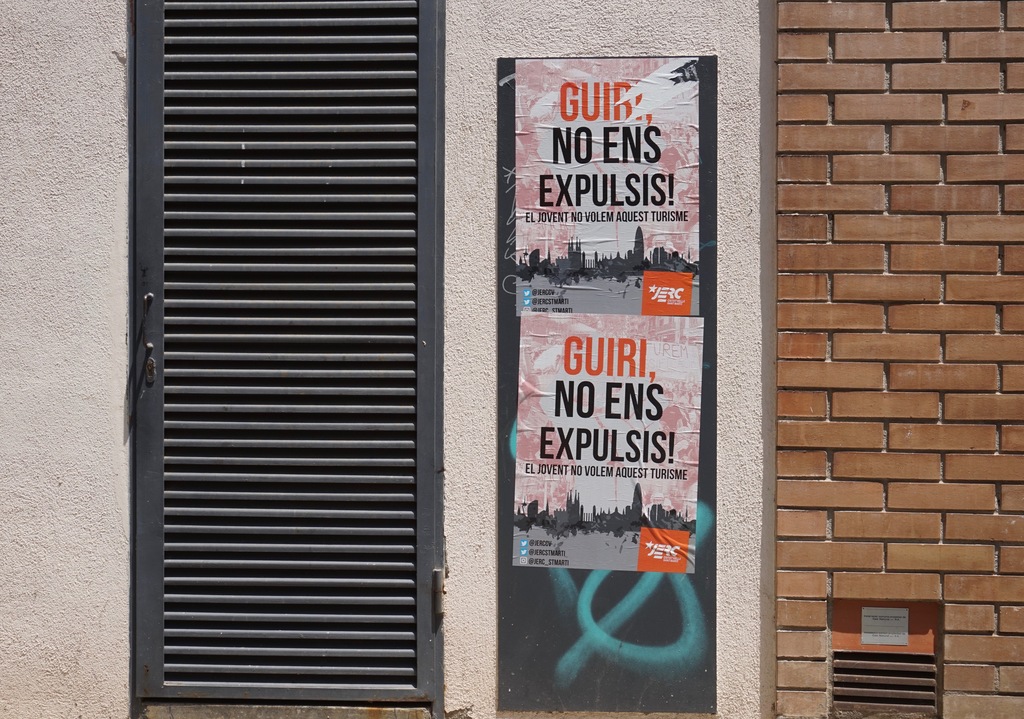 Anti-tourism posters are all over Barcelona.

Across the plaza, there’s the usual group of shirtless guys with awful posture having their breakfast beers on a bench.

I’m just having black coffee to get the blood pumping.

My friend Venus promised cheap coffee at this place, and she wasn’t wrong. My double americano only costs 1,25€.

By the time I’m drinking the bitter last sip, the table-to-table saleswomen have brought out a bag of high-waisted old lady undies. More oohing and feeling of material.

The woman at the next table buys three pairs.

I get up and walk down to the beach for a minute.

It’s pretty quiet at this time of morning.

The bars are setting out their tables to start the day. A few joggers go by in sportswear. Some girls in boxing gloves are doing an exercise in which they lay back into a sit-up, then come up punching at their partner’s gloves.

A few people are sleeping one off on the sand, and a few are sunbathing, despite the clouds and cool breeze off the water.

There’s the usual shocking variety of half-naked body types – although only about 10% of the half naked bodies there’ll be later on. From the fantastically toned men and voluptuously curved women, to the fatty liver bulges and flaccid butts of the elderly.

On the beach, I now notice, a group of people is doing a photo shoot for (I assume) breast cancer survivors. Several women with one remaining breast, and some with two, stand with scars and stitches painted in bright red and black across their naked torsos. A photographer kneels in the sand, aiming his huge camera.

The main drag along the edge of the neighborhood is Passeig Joan de Borbó.

And now at just past 5 it’s in full swing.

Restaurants all along one sidewalk with full crowds finishing lunch, starting dinner, and watching Brazil vs Mexico in the World Cup. 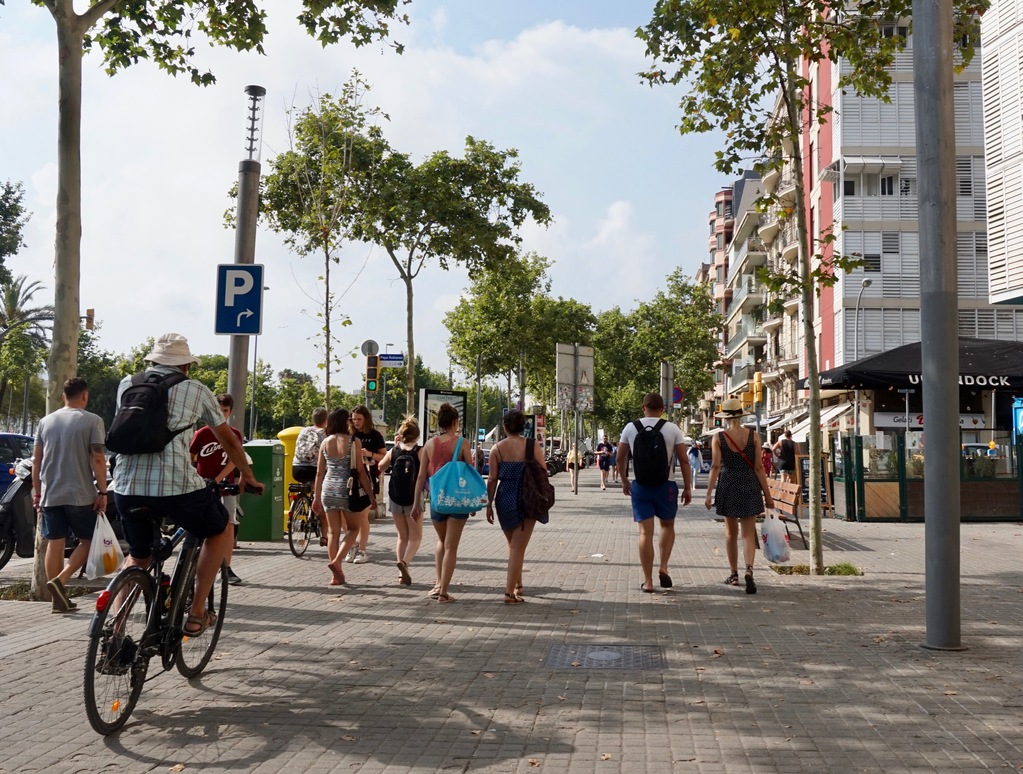 The restaurants are almost as varied as the people: Italo American Kitchen. Indian, Pakistani and Pizza. Cold Pressed Juice. Craft Beer. The King of Shellfish.

At the bottom end, near the beach, a tattooed guy who doesn’t exactly appear to be crazy is chasing seagulls. He’s taken off his t-shirt and he’s running around flicking it at the gulls. The word SHOCK is tattooed across his back.

As I make my way up, a shout rises from every bar simultaneously.

Apparently, either Mexico or Brazil has just scored a goal. I try to muster up the enthusiasm necessary to walk over to a TV for a minute, but can’t.

A few dozen manteros cross the street, heading down to work – another evening selling trinkets and fake designer handbags off of blankets.

Near the metro, someone’s put up signs to protest mass tourism.

For now, at least.

I guess I missed a few things about living in Barceloneta here.

By 6pm, for example, there seemed to be a fair number of dudes passed out face-down on sidewalks. Party all night, vomit all day? I wouldn’t know much about it… But it certainly doesn’t look like a comfortable way to nap.

Also, on Joan de Borbó, it looks like someone spray-painted out the name on the street signs at some point. The paint was then scraped off, but you can still see traces.

The age-old debate over the Bourbon monarchy and Spanish imperialism in Catalonia goes on.

And the anti-tourism posters are in other neighborhoods as well.

I guess I’ll have to write more about that at some point. But to get you started, check out the article here: is tourism ruining Spain?

P.S. For more Barcelona fun, see also pros and cons of living in Barcelona, and adventures finding a flat. And by all means, let me know what you want to see here on the blog. I’m a little hesitant to start reviewing restaurants or whatever it is the kids do these days. But I guess I can write more about the city. It’ll be cool, either way. Peace!

P.P.S. Update: okay, I take it back. Two weeks later, and I’m already reviewing restaurants. Check it: best restaurants in Barceloneta. And enjoy!

Another Barcelona Fire that the Political Class Doesn’t Care About