Spanish Lawyers – the good, the bad and the ugly of the legal system

For a guy who moved abroad when he didn’t get the call back for the job interview at McDonalds, I’m still shocked to be able to afford a lawyer in Spain.

They’re cheaper here. It’s not the US. Less prestige.

Anyway, in the interest of sharing my long experience for the betterment of public knowledge, here are my top 7 lawyer experiences in Spain.

But I’ve forgotten by now.

Hit me up with your Spanish lawyer stories down in the comments. I’m always happy to hear from you.

Lawyer #1 had a septum ring and a couple of tattoos.

She worked at one of the labor unions.

I guess the communist one.

I’d heard they’d set me up with some of the paperwork – or at least inform me a bit – about the immigration process. And for free!

I was dead broke and only 22, so free was a big thing for me. And I was sort of fascinated by the idea of a communist labor union.

But lawyer #1 snorted derisively at me when I said I was from the US.

Not proletarian enough? Who knows…

Spanish leftists are all about permanent work contracts and hating on “America”. They were hoping we’d pop in and crush fascism for them after World War II ended. Instead, we left them alone.

And 70 years later, they’re still resentful about it.

(For more, check out the film Bienvenido Mister Marshall.)

Anyway, when she was finished being condescending, Lawyer #1 gave me a badly-photocopied page describing the process I’d have to go through to get legal and sent me on my way.

I’ve been treated well by virtually everyone here in Spain – except for people on the far left. They can be sort of jerks.

Lawyer #2 was right to the point.

Not too nice either, but at least knowledgeable.

I failed to get the visa because it turned out an FBI background check takes months to arrive in the mail.

Other countries (some, at least) will give you a background check in an hour at the embassy.

We have to go to the embassy, of course, because the FBI will only accept a certain type of fingerprint card that they only have at the embassy.

The US embassy is full of people from every country in the world, dressed up in their Sunday best and doing interviews in hopes of getting a green card.

I have a feeling the whole embassy system is a for-profit green card mill.

Everybody pays hundreds of bucks just to have their case heard. And every time I’ve been, the whole embassy is full. There’s a line around the block. It’s like launch day at the Apple store – only there’s a new iPhone every day.

In the corner, window #16 is the “consular section”. There, 2 or 3 US citizens – tired, poor, huddled – sit forlornly, waiting for the one person assigned to attend us.

But she’s on coffee break for an hour and a half.

When she arrives, she doesn’t speak English and denies knowing anything about the fingerprint cards. I’ve been through this before so I point to the exact drawer where she keeps them.

She opens it. “Oh yeah. Here you go. Now I just need to get you the letter to take to the police.” Quite a business, this selling of stamped documents.

I pay her a full day’s salary to get the letter stamped and then leave.

Pick up your belt and your cellphone in the locker at security. 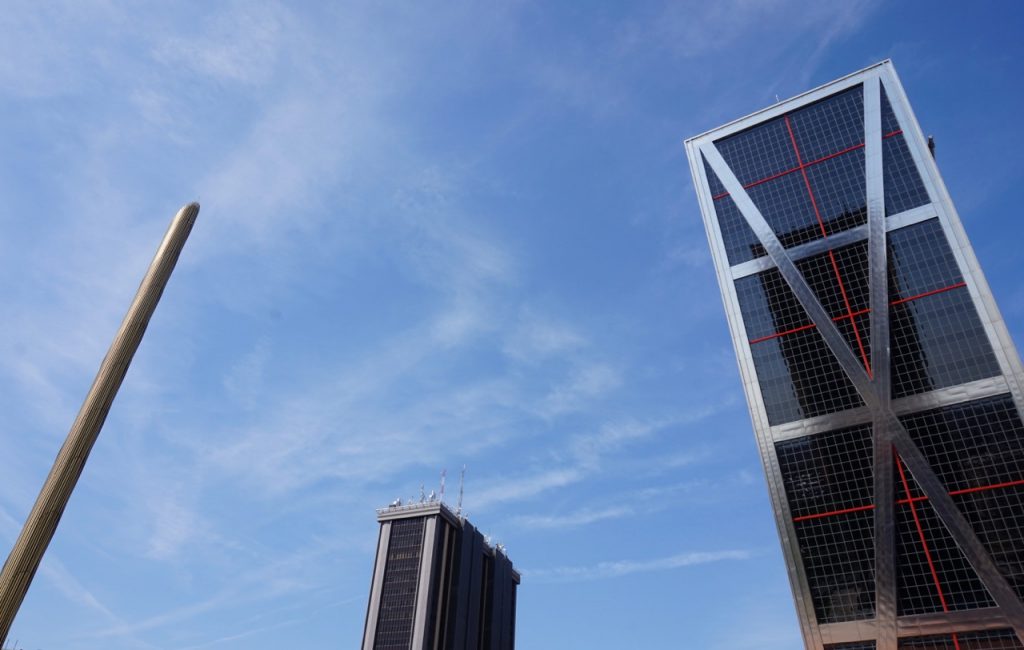 Plaza Castilla, here in my barrio in the north of Madrid.

After that, it was a long walk in the snow to the police forensics office. Like all police offices for foreigners, it’s located at the edge of civilization – and part of it’s an “immigrant internment center”. Walking past that kinda killed my mood.

Anyway, I was learning the process.

The police were nice. They spread ink on my hands and gave me the card to send off to the FBI. Eight weeks later, the FBI confirmed I wasn’t a criminal. But by then it was too late to put in the other papers.

On to the next one…

Lawyer #3 had a huge scar on her throat.

She was tall and blonde. Well dressed.

Big scar on her neck. She tried to cover it with a scarf.

But throat problems were the end of our professional relationship. She sent me to some office next to the Prado for an appointment, without giving me the printout or the confirmation number.

The security guard said, “No printout, you stay out”.

I called the lawyer up and it turned out she was in the hospital with some throat thing, barely able to croak. She didn’t have the confirmation number on her, of course. She sounded pretty bad.

So… nothing to do.

Without that stamp, I couldn’t present anything, and my new background check expired before I could get another appointment.

Another 6 months of my life wasted.

Well, maybe not wasted. I still got to stay in Spain, eat good food, drink Rioja.

Could have been worse…

Lawyer #4 had warts all over his hands.

Shaking was a bit uncomfortable.

But at least he answered the phone and showed up when he was supposed to.

That time my visa application process failed because the company I was working at was run by tax cheats.

In any case, it was the first time I managed to get all of my papers presented on time.

Since I’d left the US so young, I’d never had to deal with serious bureaucracy back home. And as a complete novice, I probably wasted a lot of time by being too slow and not asking the right questions.

Apparently, dealing with bureaucracy is your part-time job if you’re an immigrant or expat. Would you like fries with your apostille of the Hague? Why yes, of course!

Oh well. Another six months gone from my youth.

I didn’t want to pay the same lawyer to fail again, so I moved on.

Lawyer #5 was badly informed, but she had a really nice office.

Anyway, she knew what to google.

She had no idea about my situation (how did I find her, anyway?) but she checked out the government website and read the relevant parts to me.

When I got home, I did my own googling and figured I could have done it myself.

In any case, she turned out to be right.

Another few hundred bucks out the window, but this time it was well-spent. 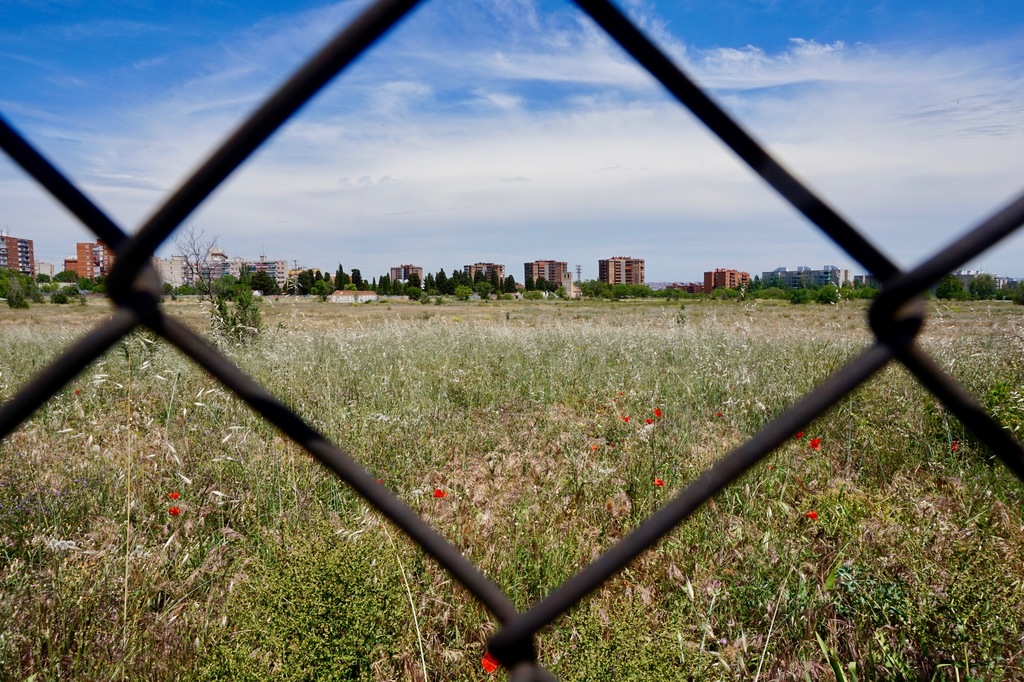 The view from the police station at Aluche.

It’s a long story, but eventually, I got my visa. I spent a lot of time having my Ellis Island experiences at Aluche. I renewed for 5 years, and thought I was done.

‘Cause the legal adventures weren’t over.

Not by a long shot.

Lawyer #6 called me “yankee” for some reason

She was rather disagreeable.

Her office was large and gloomy, with peeling paint and furniture that looked like it’d been found next to a dumpster. Mostly empty, lit with a single fluorescent bulb. I half expected to hear the clacking of a 1940s-model typewriter from the back room.

Anyway, if she hadn’t just given me a shit-ton of bad news, I might have let the “yankee” thing slide. But she had just sarcastically smiled through a recounting of the months of pain that awaited me and Morena.

Then and only then did she call me a yankee.

I said, “Yankees are the ones from the East Coast.”

“It’s a figure of speech”, she responded.

(Back on the ranch, we didn’t like yankees either. “Yankee” sounded like some group of Ivy League snobs who row boats for fun and wear sweaters tied around their necks. I was horrified when I found out that for foreigners it applies to anyone from the US.)

Lawyer #7 was a beautiful Dominican woman in a pencil skirt.

By this time, it appears we’re moving up in the world.

Another nice office, with the bronze statue of Lady Justice holding her scales. 11th floor. Great view of the city.

Morena was in love with Lawyer #7. And I can understand why.

The streets of the Chamberí neighborhood in Madrid.

Later, back at home, I googled her name. Looks like her career as a bikini model didn’t pan out, and that’s why she became a lawyer.

In any case, she was very reassuring.

Not a lot of good news, but she delivered the bad in such a friendly way it was hard to hold it against her.

Also, she didn’t call me yankee.

We’ll see how this goes.

Wish me luck on year 14 of my struggle with Spanish bureaucracy.

P.S. As I wrote this, I realized that only 5 of the 7 lawyers were actually Spanish. Two were from other countries. Anyway, Google is a harsh mistress, and I’m hoping to rank for the keyword “Spanish Lawyers”. Once again, I’m being ridiculously optimistic. But hey… I didn’t make it to the ripe old age of 35 by being a nihilist.

P.P.S. Any adventures with the Spanish legal system you’d like to share? Hit me up, right here in the comments… Thanks!