Looking for Spanish classes in Madrid?

Have I got the place for you…

The nice folks at Spaneasy language school recently invited me out to try some of their classes, and I have to say I was impressed.

All in all, it’s a lot better than some of the places I worked at back in the day.

On arriving at Spaneasy, I was whisked by a stylish secretary into a classroom with a big screen TV on one wall… everything was chilled out and modern and clean.

And as the students started arriving we discovered that two of them were avid readers of this blog… Online fame and fortune here I come!

The group was young, international and friendly, which always helps.

David was young and friendly too. And Spanish classes have become more modern since I last took one, apparently.

Within minutes, we were discussing what we have on our respective Tinder profiles, and whether or not Spanish men are too short to be dateworthy.

Answer: sometimes. (Like men of any nationality, I suppose.)

My Tinder profile, it must be said, is inactive these days. Who can compete with all those dudes taking shirtless selfies in front of the bathroom mirror?

I didn’t mention that fact to the class, though… the openness with which millennials talk about online dating is still a bit shocking for this old guy. 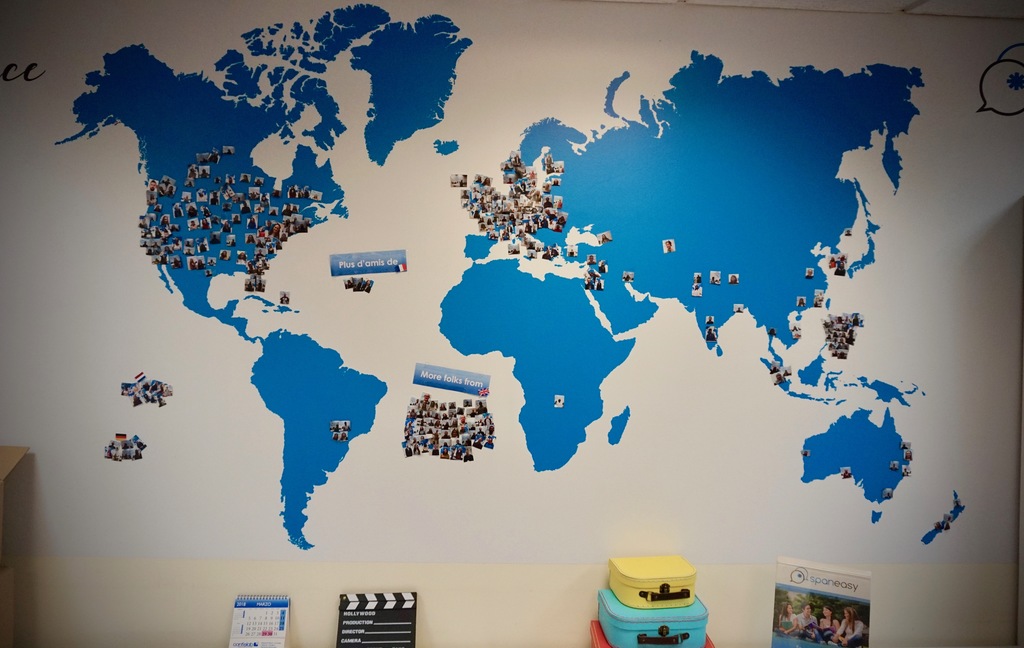 Spaneasy’s students are very international. Each tiny photo is one of their Spanish students pasted (approximately) where they’re from.

Anyway, the class was focused on conversation, which is good, because I don’t spend a lot of time speaking Spanish these days.

How is it possible to live in Madrid and not speak Spanish?

I think it’s because my friends are so international that we just end up using English most of the time.

I speak Spanish with my (admittedly few) Spanish friends, and when I’m out and about in the barrio.

But in my social life we seem to operate mostly in English.

More information about Spanish classes in Madrid at Spaneasy

You can get in touch and book classes directly through Spaneasy’s website or find them on Facebook here. 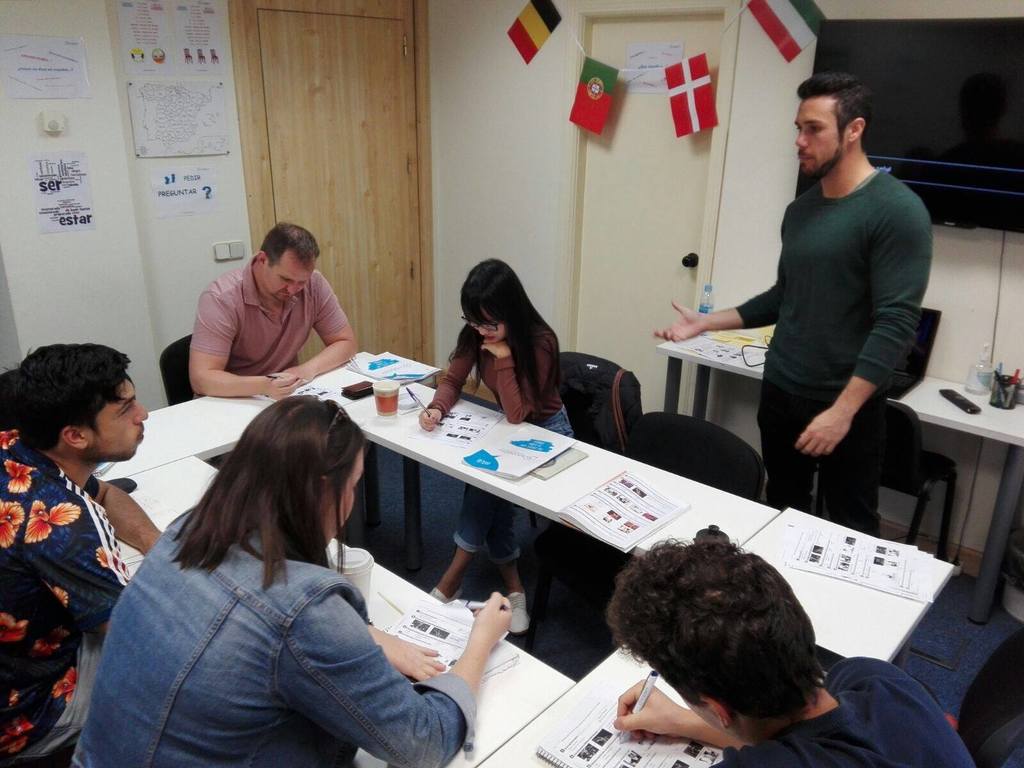 International students learning Spanish at Spaneasy in the center of Madrid.

And finally, there’s something else I should mention…

Why you should learn Spanish while you’re in Madrid

Learning Spanish is very important if you really want to feel integrated in Spain.

A lot of people here do speak some English, but they’re probably not the people you’ll be dealing with on a daily basis.

And while you technically can find an English-speaking doctor or dentist or hairstylist, they’re still sort of rare…

Why live with that sort of language barrier if you don’t have to?

Make the effort to learn the local language and you’ll be much better off.

I really think you should take Spanish classes while you’re in Madrid. And also go out of your way to meet people.

The Spanish language is huge in the US, and it’s only going to get bigger. Plus, Spanish is one of the top world languages, spoken by nearly half a billion people – which puts it right up there with English and Mandarin on the rankings.

So if you’re here for a few months, by all means take a Spanish course. Don’t waste your time abroad hanging out with people from back home.

And if you’re here longer, it’s even more necessary.

That’s all I’ve got for today.

P.S. Spanish classes in Madrid are only one of the things you’ll need if you’re going to be here. Moving to town? For more fun times, check out pros and cons of living in Madrid. And also, some of our most overrated tourist traps which you can safely avoid. And if you’re looking for something else to do, check out fitness in Retiro. Have fun!