As an American living abroad, I get asked a lot of questions about the US.

In fact, sometimes I feel like a sort of unpaid American Ambassador…

I spend so much time answering people’s questions about the “American way of life” that it’s practically my part-time job.

And I’m not the “typical” rah rah American patriot when I answer them.

Those people – the rah rah patriotic type – usually don’t travel far from home. And those Americans who do go abroad are usually on the liberal end of the political spectrum.

In any case, if the State Department knew what a lazy, half-assed job I’m doing as unofficial ambassador, they’d probably send someone more qualified.

(Waiting for the black helicopters to show up any day – hopefully with a cushy severance package for me.)

But while we’re here, lets’ talk about…

I guess I should mention that I live in Madrid, the lovely capital of Spain.

And that most of my travel is limited to Europe… with a couple of exceptions when I was younger.

So it’s possible that if you go to Vietnam, Zimbabwe or Argentina you’ll get a very different set of questions and reactions from people when you tell them you’re American.

This is, as usual, just my experience and my opinion.

So what are the big questions people ask Americans abroad?

Question 1: Why are Americans so ignorant of other cultures?

I’ve addressed the topic of American ignorance in another post.

And I suppose there’s something to be said for it. The USA is a big country, and most people never have the need (or perhaps the desire or money) to travel abroad.

Additionally, our school system puts a lot of emphasis on the importance of the USA and our history – and doesn’t spend much time on the existence of the 190-some other countries out there.

However, the answer I usually give to this question is: “Please tell me everything you know about my home state of Arizona before we continue.”

The response is generally something like, “well, it’s a city in Texas, and located somewhere in the center of the country.” If you give them a map with no state names, they’ll usually point to Kansas or Nebraska.

(I know, because I used to do it as an activity in class back when I was an English teacher.)

They’ll then be shocked to learn that Arizona is a state, and approximately 1500 miles from where they thought.

So ignorance goes both ways.

The difference is, people from other countries have probably spent much of their lives watching American TV and movies, so they think they know a lot about it.

Test them for specific facts and you might be surprised.

Question 2: What’s the deal with guns?

My answer: I don’t really know.

I guess the gun lobby is pretty powerful, for some reason. But the government manages to regulate other industries to keep dangerous objects and substances out of the hands of the wrong people.

Why can’t they do the same with guns?

I’d like to know… Because the second amendment is pretty vague.

It must be said that some other countries are much more dangerous than the US despite having fewer guns per capita.

But it also seems to be true that the US is about the most violent of the so-called “developed” countries. 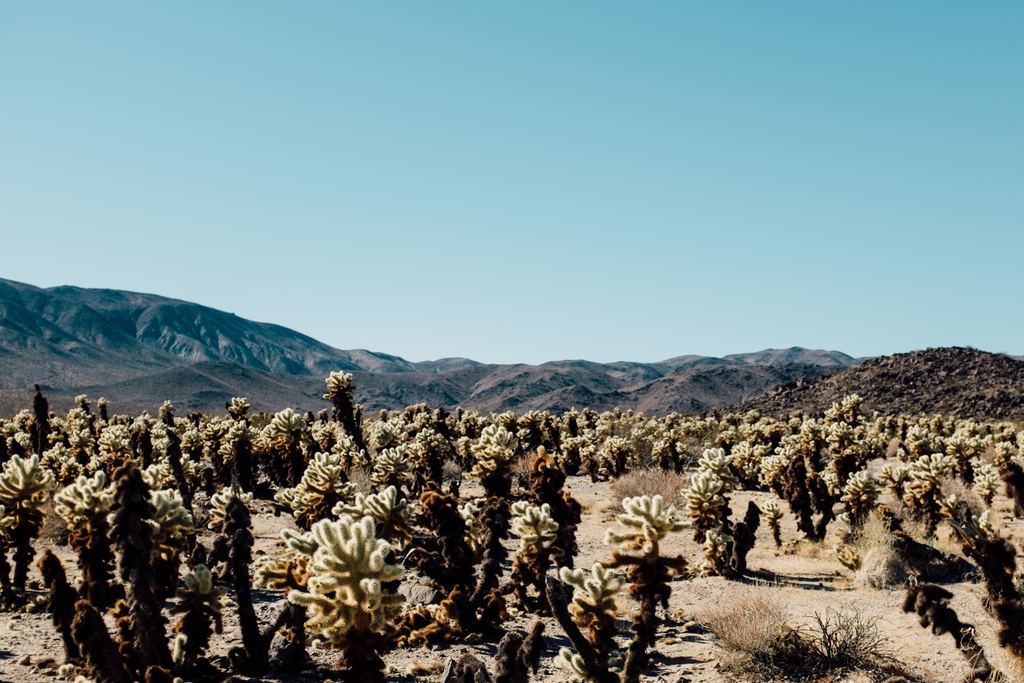 Pretty much the view outside my window while I was growing up. Aburrido no, lo siguiente.

In any case, I grew up with a couple of guns at home. And it’s fun to watch the look on European people’s faces when I describe how my dad would take me shooting when I was very young.

Yes, little Daniel, while still in elementary school, used to occasionally wake up very early in the morning to do target practice in faraway places in the desert.

It was a lot of fun.

(I was already reading at an adult level, despite being in elementary school, so maybe that’s why my dad had no problem putting a gun in my hand. Or maybe it’s just weird Arizona lifestyles.)

Question #3: So are you a Trump supporter?

This is the most common question people ask within 5 seconds of meeting me these days.

And the answer is no, I wouldn’t call myself a supporter. More like “resigned to the general futility of politics”. And trying to make an impact in other ways. (Refugees, anyone?)

In any case, I’ve been abroad for a long time.

I moved to Spain in 2004, and was here for the second term of old George W.

I was super pissed about the whole political situation in the US back then. 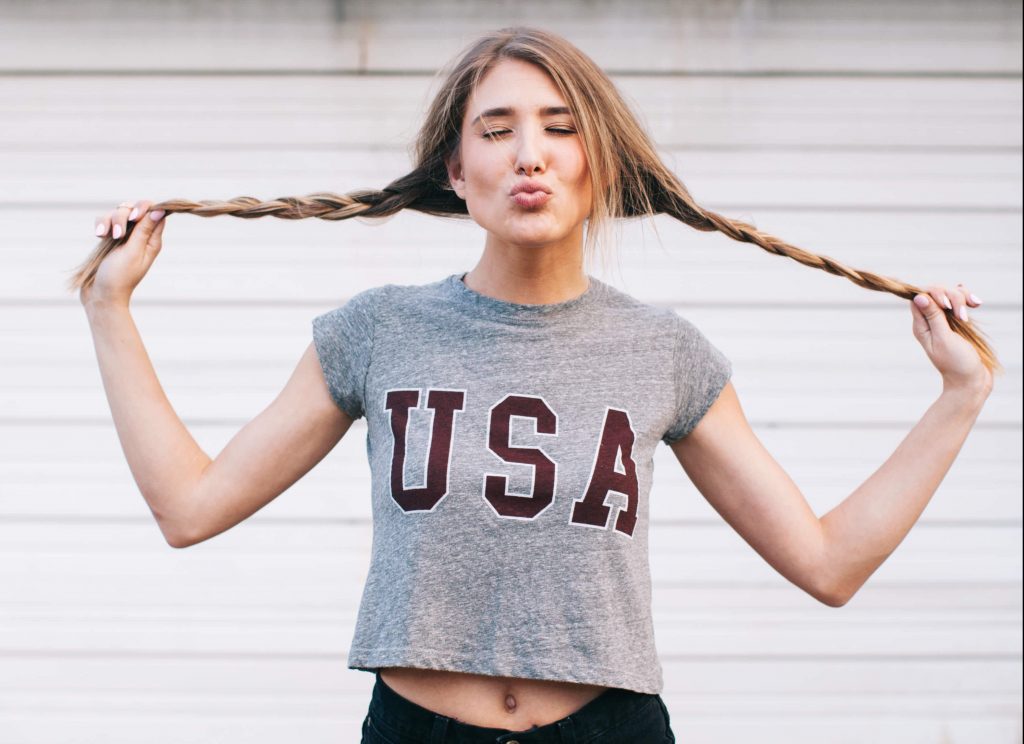 So these days, I try not to get worked up about politics. At least not in the standard sense of worrying about what a bunch of guys in suits are doing in faraway places.

(I’ve also yet to meet an actual Trump supporter. Probably because most of them don’t make it to Europe. Because point #1 we saw above. Anyway.)

Moving on to more fruitful conversations…

Question #4: Why are so many Americans overweight or obese?

This is a question I’ve thought about a lot too, because it’s a public health problem that’s actually quite worrying…

Why are there so many seriously overweight people in America?

I have a few guesses, although it’s sort of a complex issue.

For one thing, Americans spend most of their time driving or sitting. There’s just not much walking going on.

In fact, where I’m from, we didn’t even have sidewalks. And I had the police called on me more than once just for being a teenager who was out taking a walk.

(People must have been worried their neighborhood was being overrun by gingers with no souls. Fuckin’ suburban idiots.)

In any case, walking’s just not something people do in most places.

Here in my European capital, though, I walk about an hour a day just as a part of my lifestyle. Walk to get coffee, walk to get groceries, walk to catch the bus or the metro, walk to a nearby restaurant for dinner.

I also walk for fun, just to clear my mind.

People in the US tend to just graze all day long, and eat a candy bar or pop out for a frappuccino whenever they’re just a little bit hungry.

And at least a few people I know think that eating Pop Tarts or breakfast cereal for dinner is perfectly acceptable.

Generally, I think that people in the US are victims of marketing for the worst kinds of foods. And we’ve completely lost sight of the difference between real, natural food and completely artificial pseudo-food.

In paleo terms, they’re riding the wave of insulin straight to Diabetesville.

Hungry? Why wait… Have a Snickers!

(Said no trained health professional ever.) 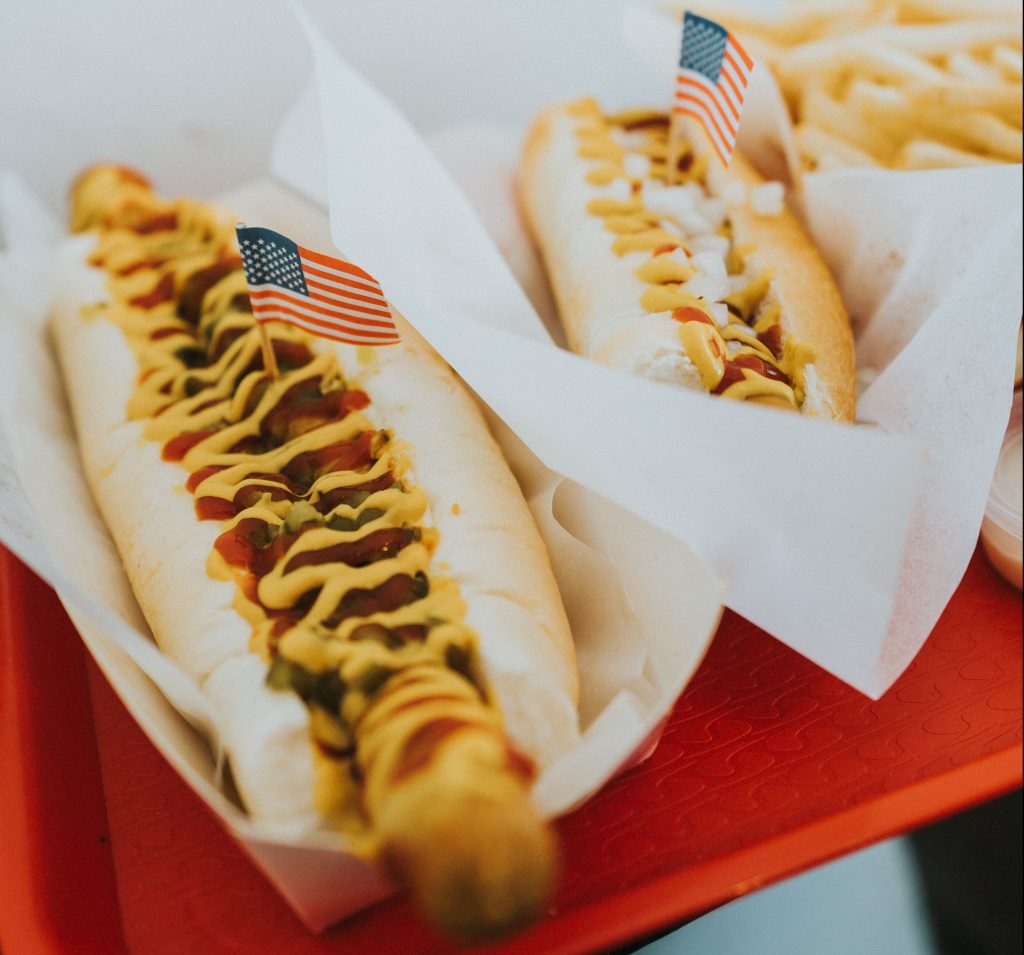 Are American hot dogs as big, fat and juicy as everyone says? Well, of course they are…

And finally, there’s the social aspect.

I always remember the day they started talking about Body Mass Index on the radio. The authorities said it was the new thing.

Dutifully, everyone in my family calculated it out.

I was running on the cross country team at school at the time, so I was “emaciated” by the standards of the noble Welsch family. When in fact my BMI was just normal.

Both obese, according to the BMI.

“But no”, they insisted. “Bob at the office… he’s obese! I’m a lot thinner than most people. Just take a look around.”

And it was true.

They both should have lost some weight, but it’s also clear that if you’re surrounded by 300-pound folks, you don’t feel nearly as bad about weighing 240.

(Or if most of your friends were clocking in at 140 kg, you wouldn’t be too worried about weighing 110 kg, for the more metric-system-inclined.)

Question 5: Is life in the US just like in the movies?

I guess it depends on which movies.

Most Hollywood movies are different than my life back in the US for two main reasons:

European cinema is a bit different, I must say… often, the directors out here will make intentionally boring films as a statement about the meaninglessness of existence.

But in the US we’re more into drama, car chases, alien abductions and the like – and the kids getting abducted by aliens are virtually always upper middle class.

When people ask me more specific questions about movies vs reality, it’s usually something like “Is there a captain of the football team, and a blonde cheerleader, and are they really the cool kids who lord it over all the dorks in high school?”

My foreign friends claim the cool kid / loser dichotomy doesn’t exist in Spanish schools. And what do I know?

Spanish people are also curious about such exotic elements of the American way of life as cul-de-sacs, paper bags at the supermarket, and little league practice.

All things which do exist, and which seem like important cultural traditions if you’re out there in suburbia.

I just realized I’d written 1500 words without mentioning the most common conversation I have as an American abroad.

Person: So where are you from?

Me: The US. Arizona, actually, in the middle of the desert.

Me: That’s cute. Because where I’m from is nothing like New York.

Person: But it’s close by, right? You can take a day trip to see the Empire State Building whenever you want, I’m sure.

Me: No, actually, it’s a really big country and most people live in places that are far more boring.

Person: Well, I’m hoping to go to New York soon. You should tell me about your favorite restaurants. And the best places to go shopping in Manhattan…

Me: Oh sweet Buddha, why me?

And that’s about all I’ve got for today.

Please forgive me if I’ve offended your sentiments in some way. I do my best to be a fair and balanced news source for everyone, American and otherwise.

Anyway, what do you think? What questions do you get asked as an American abroad?

P.S. One film I thought was very realistic about life in the US is Boyhood. I was bored to tears by the end, and mostly it was just pointless and embarrassing throughout, but hey… that’s life in America. Go spend 20 years in the bible belt and then come back and tell me otherwise. I’ll wait. (Or you can just leave a comment, right here… Thanks!)

P.P.P.S. You’ll notice that the Chorizo Chronicles doesn’t have a paywall. If you’d like to support the finest English-language blog in Madrid, please consider making a donation. I’d be much obliged to ya, sir (or ma’am). I’ll have some wine in your honor…