Free speech in Spain – the Spanish rapper in prison and more

I had to google around to find her name. But anyway, she was the comedian who made headlines last year for a photoshoot with Donald Trump’s decapitated (and fake) head.

She had a day or two in the spotlight, got a call from the Secret Service, and cried like a baby about how Trump’s tweets had “ruined her career”.

‘Cause obviously she was living in some sort of extreme liberal bubble where decapitating the president is “funny”.

(Full disclosure: I had never heard of Griffin before that, and only once since, so I’m not sure what kind of damage has legitimately been done…)

But anyway, my thought about the whole thing was – get ready for it…

Because in a lot of countries, a stunt like that would get you locked up in a secret prison.

You’d disappear in the middle of the night, and not even your family would be able to find you.

(A few days after it happened, in fact, I met a girl from Thailand who was visiting a friend who was a political exile for belonging to a group that criticized the Thai monarchy. 20 years and counting, she couldn’t go back to her country. For something she did way back at university. Take note, Ms Griffin.)

This week in Spain, free speech has also been an issue.

One of the top stories, in fact, is about a rapper named Voltonyc who’s going to prison for insulting the king – His Serene Majesty King Felipe VI.

And also, apparently, for glorifying terrorism and making threats (all in his songs) to a local politician out in Mallorca. 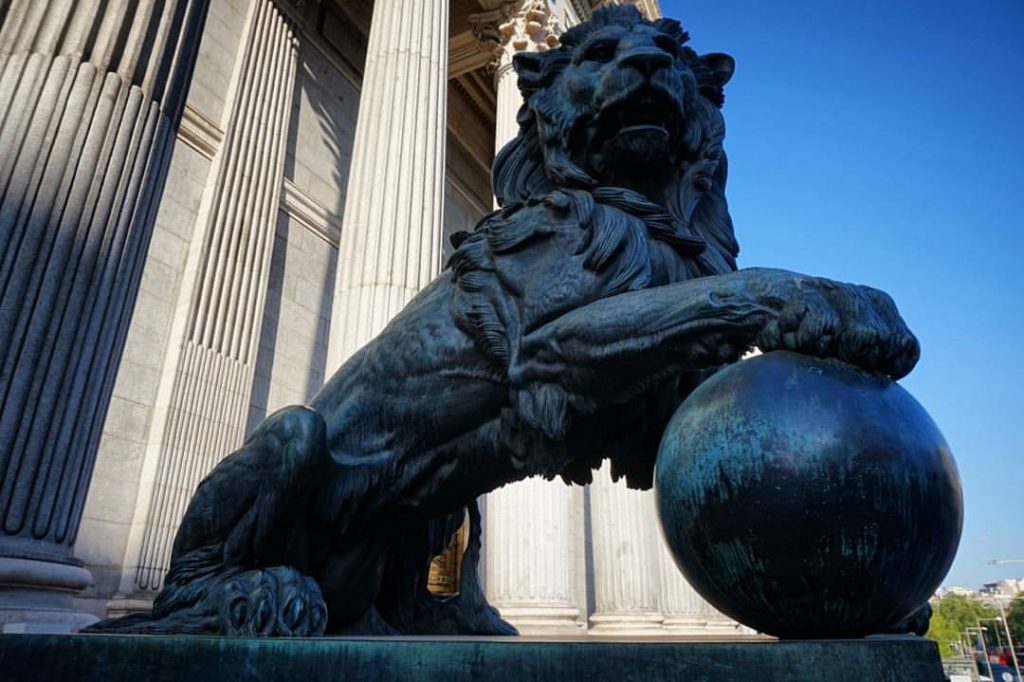 One of the lions outside the Spanish parliament in Madrid.

The Supreme Court upheld the sentence, so I guess Voltonyc is shit outta luck. Three and a half years in prison.

Sad but true – in Spain, musicians can be imprisoned for their lyrics.

In the US, free speech and freedom of the press are sacred.

The system to protect them is imperfect, but at least it exists. And we (those US-persons among us) should be thankful.

Freedom of speech in Spain is a bit more restrictive.

Some other cases from recent years…

Best not to mess around… Glorification of terrorism is illegal here in Spain, as is insulting its victims.

Insulting the monarchy is out.

Glorification of fascism, on the other hand, is perfectly legal. Funny how that works.

Another story this week is that a series of photos was taken down from Arco, the contemporary art fair here in Madrid, for portraying Catalonian politicians as “political prisoners”.

The organizers of the fair later apologized, and the work was bought for 80,000 euros by some sort of media baron.

So in the end, I guess the artist, Santiago Sierra, ended up with a sort of victory.

There was no “official” censorship, as far as I know.

But they King was scheduled to show up and open the fair to the public – and there had been reports about the work in the newspapers beforehand.

The Catalonia situation is still touchy, so the “offending” work of art was removed.

The line on free speech has to be drawn somewhere, and I’m no expert in Spanish constitutional law.

But I’d rather artists be free to express themselves, even at the expense of the government or monarchy.

In only slightly related news…

The YouTuber who “cured” her cancer with juice

Another interesting story I read this week is about the YouTuber Mari Lopez, who claimed that lemon juice – in addition to prayer and a raw vegan diet – was going to cure her cancer.

Well, she died. The cancer won.

She says the lemon juice was working just fine – it’s the chemo that killed her.

Thousands of people were following the “juice and prayer” cure that Lopez proposed. Comments on her videos include glowing reports on the effectiveness of coffee enemas as well.

I personally think the whole thing is sick and wrong. And if I was running YouTube I’d have serious doubts about keeping videos like that available to the public.

If we prohibit people from disseminating any sort of unscientific bullshit, we can say goodbye to astrology, homeopathy, religious fundamentalism, Flat Earth Theory, and most of what passes for diet advice.

Some of the most heretical, offensive and otherwise wrongheaded ideas of the past are now “common knowledge”. (Although it must also be said that a lot of people were persecuted for spreading that knowledge back in the day.)

So where’s the line?

I’d rather have rappers criticizing the monarchy than people in prison for exercising free speech.

What do you think?

Hit me up in the comments.

P.S. I read the lyrics of Voltonyc’s songs, and agree: they’re pretty offensive. If I was a victim of terrorism and met him walking around, I’d be happy to spit in his eye. But I don’t think he should be in prison. After all, some of the best-known rappers in the US have songs which are largely about cutting their enemies into pieces and dropping them into a lake. Lookin’ at you, DMX. Woof!