The street slopes down into the bright sun of a January morning.

I’m due for a casting, and I’m fashionably late as befits my new status in society.

Yes, as of yesterday, I’m an actor.

Or at least I’ve spoken to someone at a talent agency.

She wants me to try out for “man reacting to steering wheel”, a “character” in a car commercial that will be filming soon.

She said I have a unique look and would be great on TV – in very limited doses, I suspect. She also said my complete lack of experience didn’t matter.

So, itching for an excuse to get out of the house – as only a guy with an online business can – I said yes.

And here I am.

Filling out a form with my pants size, my height, my weight, and being assigned a number: 324.

Soon I’m directed downstairs, where I sit on a black couch that’s a bit worse for wear. There are other guys here, on chairs and sofas in a waiting room. Guys in tight shirts. Guys with well-groomed hair.

All waiting for their chance to be “man reacting to steering wheel”.

Hi-Diddle-Dee-Dee, an actor’s life for me

I look around and immediately decide one thing: If they’re looking for a bearded ginger, I’m in… ’cause I’m the only one. 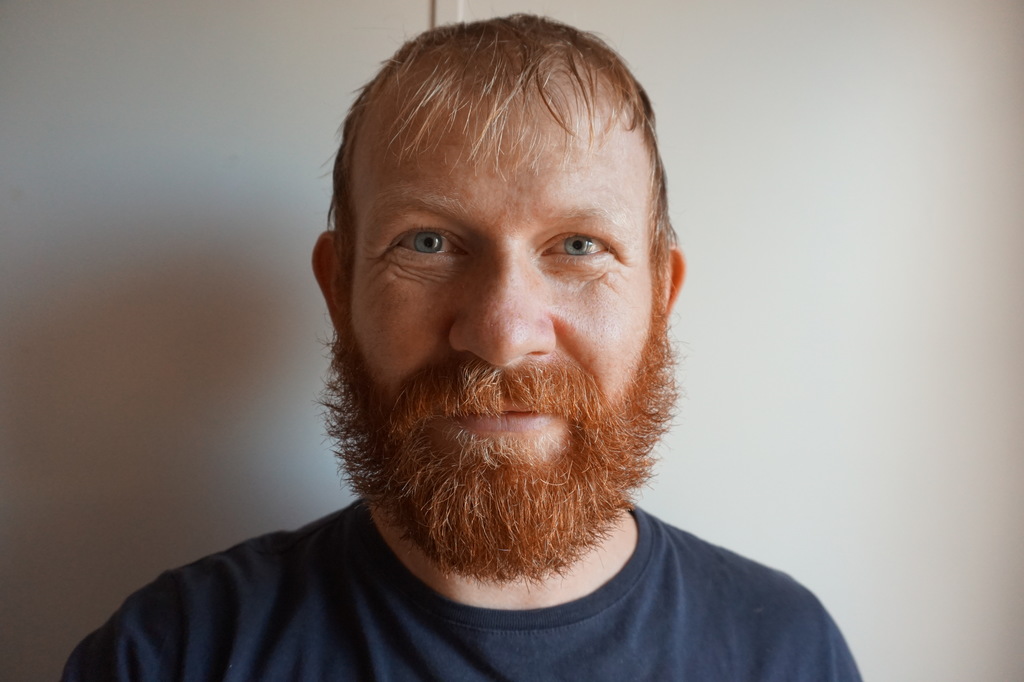 Who wouldn’t want this guy in their commercial?

If not, well, at least I’ll get a blog post out of it.

It’s going to be a while, so I pull out my copy of Scott Adams’ brilliant book How to fail at almost everything and still win big.

I’m rereading it, ’cause it’s awesome.

“If you want success, figure out the price, then pay it. It sounds trivial and obvious, but if you unpack the idea it has extraordinary power.”

“Reality is overrated and impossible to understand with any degree of certainty. What you do know for sure is that some ways of looking at the world work better than others. Pick the way that works, even if you don’t know why.”

After a minute another guy comes and sits next to me.

I look down at the black couch. Then at the guy with the moustache and the wave in his hair.

Maybe this is the “casting couch”, I think.

Maybe they get me here with promises of a few crisp 50s and as soon as I get in front of the camera in the little room, they’ll ask me to take my pants off.

Like I said, I’m new to the whole acting game.

And the guy with the moustache is kind of creepy.

In front of me, there’s a massive door that must have once belonged to a meat locker in a slaughterhouse. The kind with the big lever to open it.

You’d think it’s for soundproofing, but it can’t be, because as I sit there, someone behind the door starts busting out an earsplitting rendition of Mamma Mia, with the kind of godawful Spanish accent that should be prohibited by the Geneva Convention.

So there’ll be singing?

I sang before audiences in the high two figures back when I was a punk rocker. I’ve also sung on video – and hoped tens of thousands of people would see it. (They didn’t.)

I guess I can sing in front of an audience of several in the little room.

A few minutes later, he comes out – another scrawny, goateed “actor” in a pea coat. He heads up the stairs to leave. And soon after, inside the room, someone else starts singing one of those Spanish hits from the 80s.

I can safely say, I’m a better singer – despite being awful – than both of them. At least my voice doesn’t sound like someone abusing a small animal.

After a few minutes, a girl comes out and herds another several guys into the meat locker.

The guy with the moustache is apparently frustrated at the wait, and leaves.

What a prima donna.

Inside the meat locker, there’s more singing. Outside, more guys in tight shirts come down to wait with us.

With all the singing, I doubt anyone has time to take off their pants in there.

I start wondering about the character of “man reacting to steering wheel”. Does he have kids? What does he do for a living? Where, exactly, is he going when he has his on-camera reaction to the steering wheel in question?

Is his reaction as orgasmic as, say, the women in yogurt commercials?

When the herd of guys is done, the girl comes back out and brings me in, with several others.

My five minutes on the casting couch

Inside, it’s nothing like a meat locker. A grey wall, a guy on a computer, a cameraman, the girl and another sofa. A few chairs scattered around.

The girl explains a bit about the scene: first karaoke, then we sit and react to the steering wheel. Apparently there’s some sort of sci-fi element to the commercial, involving time travel. And the “reaction” is when we realize our car is driving itself.

(So modern… I’m practically on the vanguard of technology!)

Also, this is easily the stupidest thing I’ve done in the last few years.

But it doesn’t matter.

‘Cause I know “How to fail at almost everything and still win big”. When I read about the lives of the ultra-successful, one thing that strikes me is that they’ve failed at dozens of things bigger than anything I’ve ever tried.

I envy their failures: the failures that result from thinking big.

And in the end, this will be embarrassing and over in 5 minutes or less – much like my sexual encounters with Tinder girls.

After the explanation, one of the actors gets in front of the camera.

“When they say manos” a friend had explained earlier “put your hands up at about face level, and show the fronts and backs. And always remember to stand on the mark.”

I’d thought she was joking, but that’s exactly what they do to Santiago. Photos in profile, hands, back, and straight on.

They give him a Spanish classic to sing and he absolutely destroys it with the enthusiasm of a true actor who’s never taken singing lessons.

In any case, it’s obvious: I’m out of my league here.

His reaction to the steering wheel is pretty brilliant too. I can actually see him as some guy, driving home after a day’s work, and discovering – wow! – that his car can suddenly drive itself.

The other actors do similarly good jobs of looking absolutely silly in front of the camera without (apparently) caring.

Then it’s my turn.

I heard someone singing “(I Can’t Get No) Satisfaction” earlier, through the meat locker door, so I request that instead of some Spanish classic from the 80s.

However, the guy working the computer doesn’t understand my bizarre native pronunciation of the word “satisfaction”.

He tries to get me to sing ABBA.

“No can do, bro. Never listened to a whole song from ABBA, probably never going to.” This in Spanish.

I make an attempt to do a true Spanish accent to pronounce: Sat – ees – FAC – teeon. De Los Rrrroling.

He puts it on, karaoke version.

When I’m ridin’ round the world

And I’m doin’ this and I’m signin’ that

And I’m tryin’ to make some girl, who tells me

Can’t you see I’m on a losing streak

That was my favorite song when I was about eight.

It was the most rebellious-sounding thing on the local oldies station in Phoenix. If we had rock radio in the year 1990, I wasn’t aware of it. As far as I knew, FM radio consisted of nothing but oldies, country, and Garrison Keillor.

Incidentally, the DEVO version of Satisfaction is also pretty hilarious.

After that, I react to the steering wheel. The instructions were: Pretend to drive the invisible car for a bit, until “something” happens which surprises me. Soon, I realize that the car is driving itself, so I look – satisfied – out the window, then pick up a book to read, then look back out the window and marvel at technology.

As a guy whose emotional range mostly goes from hungry to sleepy to “needs coffee” and back again, I find the final “look of satisfaction as my self-driving car goes through the sci-fi landscape” to be rather difficult.

Just like I suspected: somewhat embarrassing and over in 5 minutes.

When I go back to get my coat, the remaining actor seems impressed.

Actually, I think he takes pity on me. I put on my hoodie and he raises a hand for a high five. “Muy bien, campeón!”

I have to say, everybody’s been really nice.

Anyway, my acting career is over.

Don’t quit your day job, as they say.

Well, I already did. Almost 3 years ago. So I guess in my case, the stern admonition should be to stick with what I’m good at: going places and blogging about it.

I head upstairs and back out into the light.

Not a bad day, so far: I faced embarrassment, I looked into the eye of the camera, and I sang.

I reacted to that steering wheel, I looked out the window.

I marvelled at technology, and my good luck.

Now time for some lunch.

P.S. Yeah, this all happened. And now, I’m waiting for their call. Like I said, If they’re looking for a bearded ginger, I’m pretty sure I’m there guy. If not, well… it was an interesting morning.