Yesterday I published an article about my neighborhood, Tetuán, in the north of Madrid.

When I later shared it on Facebook, the discussion quickly devolved into an all-out flame war.

Someone was quick to say that Tetuán is all Latin gangs and drug dealers.

And soon our little expat community was exploding with the debate about whose country sends more criminals to Spain – and where in Madrid those criminals live.

I mostly stayed out of the conversation, except to say that in 4 years living in Tetuán I’ve never seen a gangster or a drug dealer.

Someone produced a news article about the “Tetuán Hell” known as Barrio Latino – and I had to admit to myself that it’s a part of the neighborhood I haven’t spent much time in.

Close to Cuatro Caminos, on the west side of Bravo Murillo, the article (in ABC, it must be said) painted it as an area where drugs, violence and other types of lawlessness were the order of the day.

So this morning, I sprang out of bed with a grand idea…

In the tradition of the great gonzo journalists of yore, I’d go to the Barrio Latino to see what’s shakin’.

I’d try to blend in. I’d check out the drug scene.

I’d get, for lack of a better term, “all gangsta” up in this.

Adventures on the mean streets of Tetuán

I traced out a route on Google Maps with the help of the ABC article, through what were apparently the worst parts of the neighborhood.

Steeling myself with a cup of coffee, and getting in the mood by listening to Dynamite Hack’s version of Boyz in the Hood, I prepared to sally forth, gangsta style.

“Knowin nothin in life but to be legit, don’t quote me boy, cause I ain’t said shit.”

And sally forth I did…

With my black hood up, my baggiest jeans and military boots, my practiced gangsta strut, I hope to look a bit thuggish myself. It’s a cold morning, in January, and the mist is just lifting… People are going to work, buses hiss to a stop and then rumble off.

And so I strut down Bravo Murillo, ice-grillin each and every pensioner, deliveryman and streetsweeper who crosses my path.

Most other madrileños are either at work or still in bed, apparently.

Just a few minutes from home, I’m on the corner of Calle Jerónima Llorente, which the ABC article has promised is full of squatters.

The mafias, they say, occupy the buildings and then rent the flats to immigrants.

The first thing on the street, though, is a cute bakery and café full of old grannies.

I decide I need more coffee if I’m going to be adequately gangsta for the adventure that awaits. So I stop in and get a double espresso. 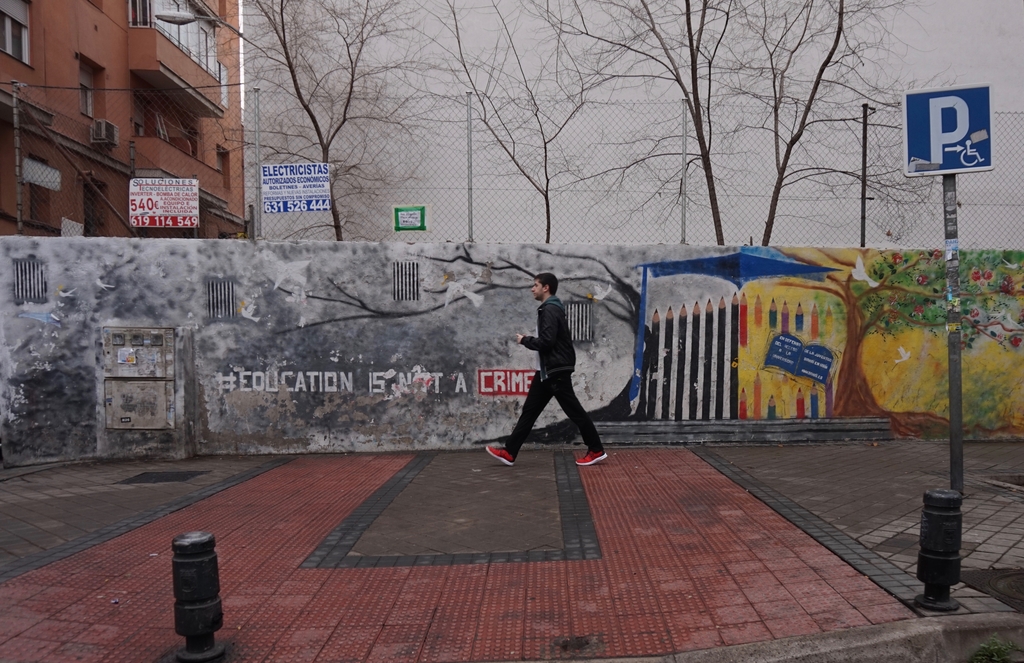 Close to the corner of Calle Jerónima Llorente, Tetuán, Madrid.

While I’m waiting, I chat up the granny behind me in line.

“What’s the neighborhood like?” I ask. “I’m thinking of moving here.”

“Expensive!” she spits. “Especially considering how old the houses are. Maybe down that way you’ll find something cheaper…”

She points in the direction of the supposed squatter’s paradise.

I thank her, drink my coffee, and sally forth again. “I should have asked her about drugs,” I think. “But then again, you never know who’s listening…”

Nothing more gangsta, I suppose, than light saber combat. Nothing spells danger like Star Wars nerds. (What’s my dawg R2D2 up to these days, anyway? Heard he got capped.)

The next thing I notice is a gourmet wine shop. “Specializing in the best wines from Eastern Europe.” They open at 12:30 – that’s hours from now.

Otherwise, the street has bars and restaurants, a few fruterías, and several abandoned buildings. 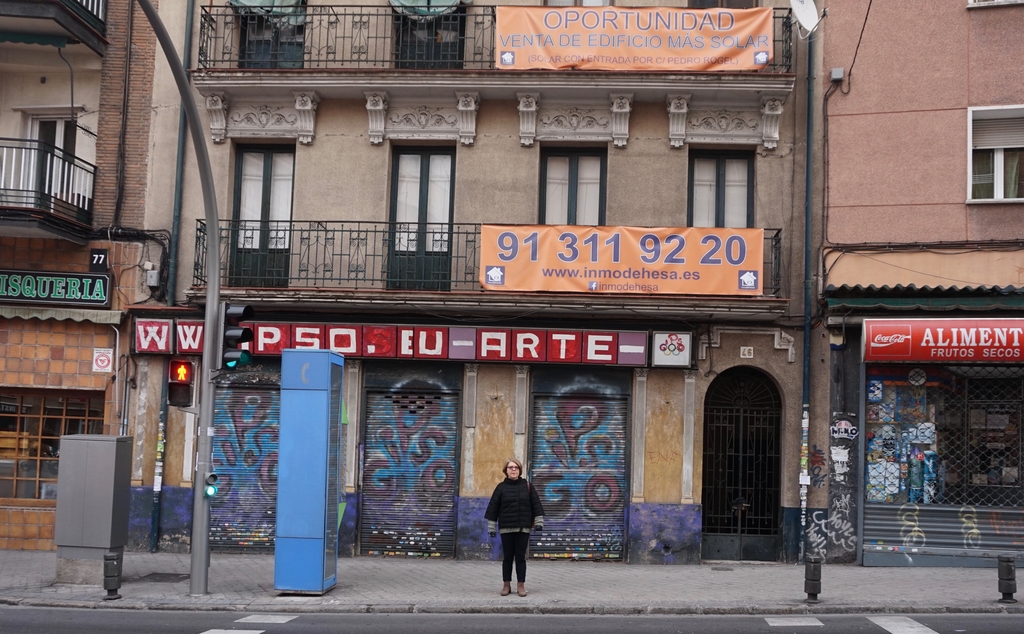 (Someone in the Facebook discussion yesterday said “I’ve lived in Brooklyn – before it was cool – as well as the Bronx and Queens, and Tetuán is much grimmer than all of them.”)

But not being one to shy away from some bricked up windows, I carry on.

If there are squatters here, they’re not the kind with banners out the window to announce their presence. Soon I’m at the end of the street, having seen nothing out of the ordinary… just a run-down area badly in need of some gentrification.

The ABC article has promised that one can buy crack on any corner of calle Almansa.

When I finally see a sign of life, it’s in the form of two more grannies with their grocery carts trailing behind them.

A couple corners later there’s a fat guy with a white moustache walking a dog. He eyes me and my camera suspiciously. 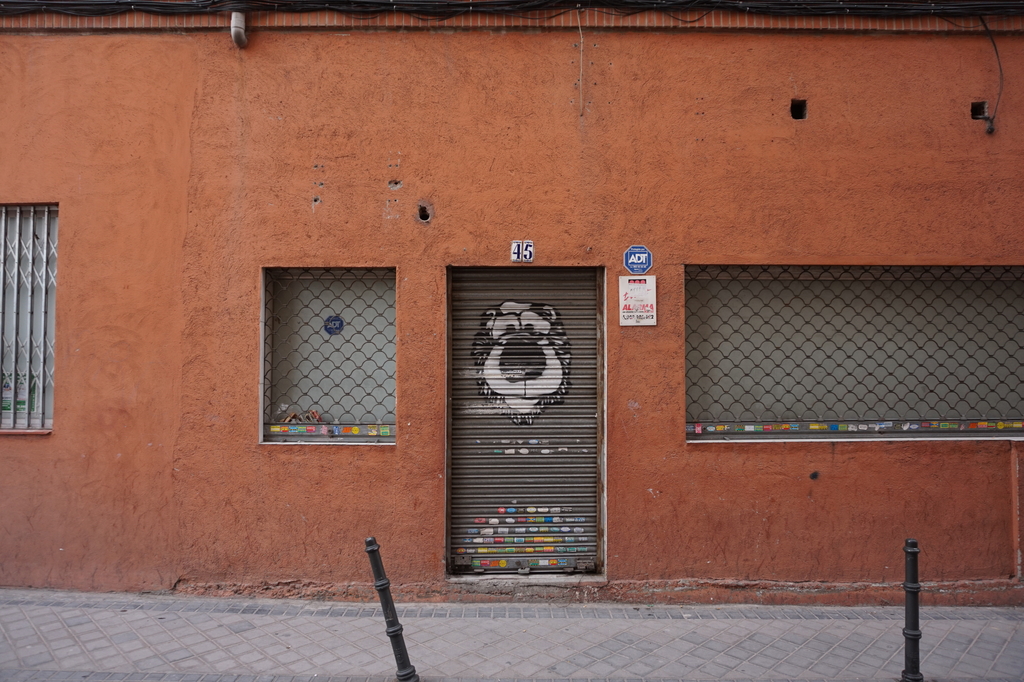 Street Art on Calle Almansa. This tiger’s all over Madrid.

A few corners after that, I finally find an open business… And it appears to be pretty gangsta. A whole wall of New York Yankees hats, Chicago Bulls jerseys in the window.

Bling, in other words.

Finally, something urban. Some streetwear.

(Spirit of Biggie Smalls, protect me!)

A bit of history…

When I was in middle school back home, the halfwits in the local government apparently decided that us kids in suburban Phoenix were in serious danger of joining gangs.

Our parents were terrified of the same thing… It was the heyday of N.W.A. and drive-by shootings were the plat du jour, apparently.

If it was happening in LA, well, Scottsdale was obviously next.

Teachers at school would lose their shit if they saw a backwards baseball cap, and we all knew that wearing such previously innocuous colors as red, blue or black could get us killed – although perhaps we’d have to travel a bit to find someone to shoot us, to our own urban hell which we only knew as “central Phoenix”.

In order to combat the spread of gang activity, the school mandated classes they called “Drug Abuse Resistance Education” – known by the acronym D.A.R.E.

This involved, if I recall, an hour-long class every Friday, given by our gym teacher – or occasionally a local police officer – in how to say no if we were offered drugs or incited to join a gang.

There were, we learned, 8 ways to say no.

To this day, I can only remember one of them: The Broken Record.

And I suppose that’s what I would have said if anyone had offered me a spot in their violence gang.

In any case, my invitation to join the Crips never arrived (perhaps it was lost in the mail?) and I was only offered drugs a couple of times in my whole high-school career.

I can’t recall exactly what I said, but I suspect it wasn’t a resounding “no”.

Back to my Tetuán Hell…

In a few more blocks I’m back at Bravo Murillo – I’ve walked all the way down Calle Almansa and nobody’s offered to sell me crack… not one measly rock.

There are plenty of Dominican bars, though, and some Afro-Carribean hairstylists. The usual money transfer offices you’d see in any immigrant neighborhood.

Still, except for the shop selling streetwear and bling, I’ve yet to see anything remotely gangsta.

Calle Topete – the best illegal after parties in all of gangland

Calle Topete, according to ABC, is a hotbed of illegal after parties, starting at 6AM and ending whenever.

But on this chilly Thursday morning it appears to be nothing more than a sleepy straight shot parallel to Bravo Murillo. 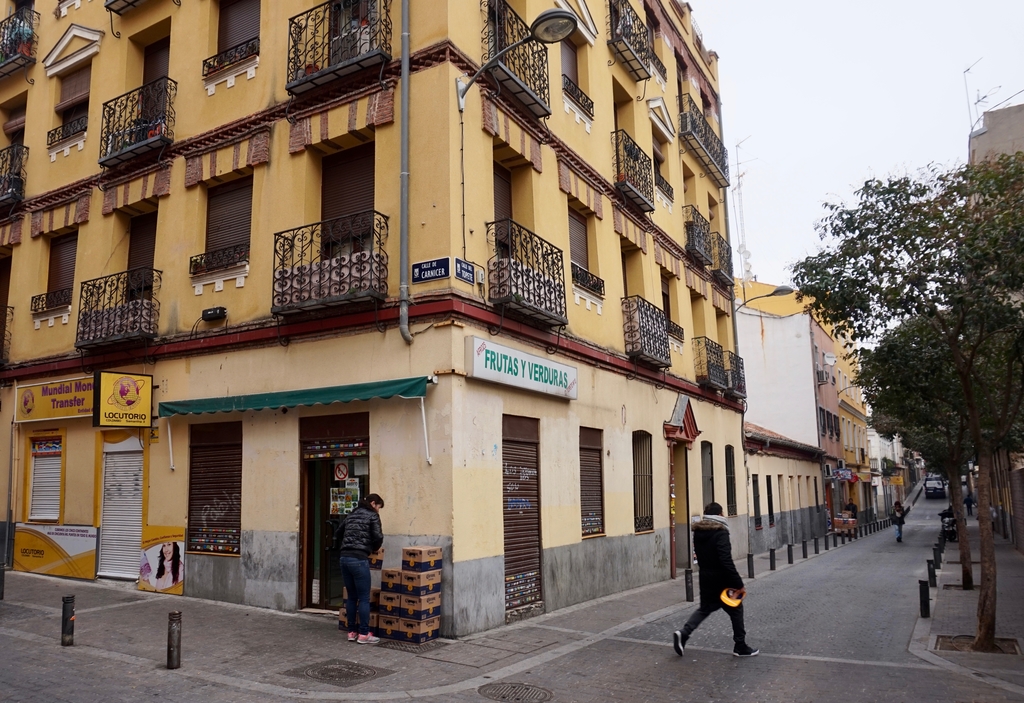 I guess the thugs are snuggled up on their sofas at this point, watching the daytime gossip shows and preparing themselves for another night of gangstadom.

You gotta get up pretty early in the morning to out-gangsta Mr Chorizo. And apparently, nobody in this area wants to get up before noon.

(When you’re Mr Chorizo’s age, you just sorta wake up at first light anyway. Guess the thugs are younger.)

And finally, back to Tetuán Heaven

In the Barrio Latino, once again according to the “Tetuán Hell” article, the gangs control the parks and plazas.

Which is also funny, because I haven’t seen a single park in an hour of walking. When I finally come across a plaza, it’s eerily silent except for a mailwoman dragging a cart full of letters.

She stops and smiles politely, patiently waiting outside the frame of the photos I’m snapping.

And that’s the end of the Barrio Latino.

All in all, I’m one disappointed little gangsta.

Also, it’s been more than an hour since my last coffee.

I wonder if Starbucks still has pumpkin spice lattes.

Also, where does a gangsta get some WiFi around here?

P.S. Ok, so the conclusion here: I have no idea if there’s actually anything going on down there in the Barrio Latino. Maybe later in the day. I suspect the journalist for ABC didn’t just make the whole thing up. But maybe… Just maybe… A certain type of person sees two dark-skinned people together and just assumes they’re in a gang. In a city with so little violence, I’m not sure what to make of this stuff. What do you think? Hit me up, right here in the comments!

P.P.S. More articles you might like: the hero goes out for coffee, expats vs immigrants and adventures without running water. And if you were thinking that La Latina was Madrid’s “barrio latino”, well, I’ve got an article about that too. It’s called La Latina: cañas, tapas and history.

Thanksgiving in Spain – How to Celebrate Turkey Day Abroad

The Unbearable Lightness of Expat Being – 17 years in Spain