Catalonia has declared independence from Spain.

I was ready to do any number of other things this afternoon, but – humble public servant that I am – I’m gonna crack open a cheap-ass beer from Mercadona and write a little news update.

The usual caveats: I’m not a “real” journalist, I’m not Spanish, I don’t really care one way or another, etc etc etc.

(BTW, if you see any blatant factual inaccuracies here, and can back them up with links to legitimate media in English or Spanish, let me know. I’m happy to correct myself.)

Today, the Catalan parliament voted to start the process of independence, writing their own constitution and leaving the Bourbon monarchy out of it.

The vote was held in secret (to avoid any one MP going to prison for sedition) and the opposition parties had walked out.

The President of the Catalan government, Carles Puigdemont, has been conspicuously absent the last few days too – after not really declaring independence when he had the chance, he’s maintained a kind of low profile…

Probably hoping to avoid prison himself.

Last week, Puigdemont refused to clear up whether or not he had declared independence in his big speech after the referendum, and this week refused to appear before the Senate to defend the Catalan cause.

Less than an hour later the Spanish Senate approved the activation of Article 155 of the constitution, which will strip the Catalan government of its functions and force new elections (apparently within the next 6 months).

Apparently article 155 is not actually in effect – yet.

The vote in the Senate only means that the government has permission to use it when they choose.

It could be a matter of hours, though.

(Reporting on news that could be obsolete by tomorrow morning – FML.) 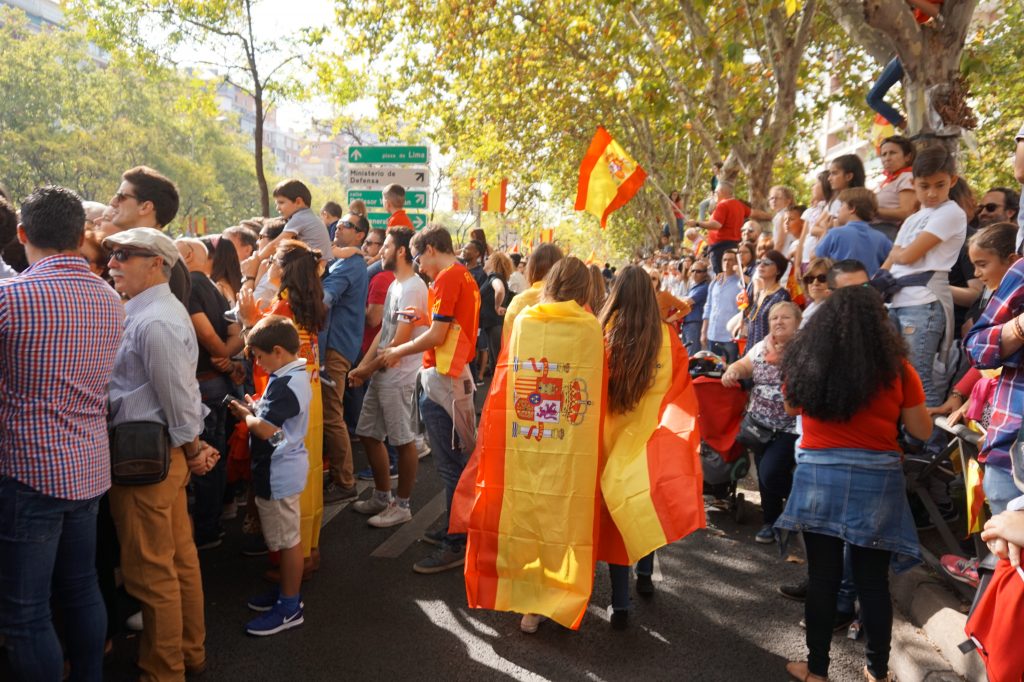 Spanish flags at the parade for the 12th of October in Madrid.

After that, it most likely comes down to a battle of fictional realities – or of lawyers and judges.

A couple of Catalan politicians are already in prison for sedition.

But this isn’t an episode of Hardcore History.

The Catalan elites know there’s virtually a zero percent chance they’ll be lined up and shot. And Spanish prison isn’t that bad anyway – a lot of people would love to be able to afford the lifestyle of the average prisoner.

In any case, the European Union seems to be completely behind our beloved Prime Minister Rajoy and the unity of Spain. So is the US State Department.

By any realistic estimate, the independence of Catalonia would be a disaster for everyone – at least for the first several years. See the more than 1500 companies who have moved out of Catalonia since October 1 for more about that.

The politicians know that if the shit hits the fan, it’s only really going to be a problem for the average guy on the street. They’ve got their bank accounts in Andorra and are most likely not worried in the slightest.

Rajoy is promising a return to normalcy and rule of law… and soon!

Will it really happen?

Article 155 means new elections up in Catalonia, and (among other things) that the central government takes control of the local Catalan police – los Mossos d’Esquadra.

Easier said than done, I imagine.

The head of the Mossos has already testified in court for sedition. They set him free. No prison, for now.

The fact is, both sides have heavily-armed and loyal police forces.

But it’s hard to imagine, in highly civilized modern Europe, any sort of real Guardia Civil vs Mossos d’Esquadra violence.

So what will actually be the result?

Well, I’m guessing we’ll have a bunch of drama between politicos for now, and eventually end up having a much more serious referendum for Catalan independence. The constitution will probably be changed – but it could take years.

A few Catalan politicians have hijacked the whole Spanish political system, and it looks (for now) like they aren’t going to take their toys and go home.

A battle of fictional realities

In the (absolutely mindblowing) book Sapiens, Yuval Noah Harari says that the mysterious glue that holds human societies together are…

Fictions, in other words.

Are people willing to fight harder for one or the other?

The ideas behind Catalan independence are mostly BS, as explained in El País. They’re not really oppressed by the authoritarian Spanish state, and in fact, they have more autonomy than Scotland or Quebec – two poster-children for independence referendums in the developed world.

But that doesn’t really matter.

The truth of the ideas doesn’t matter. What matters is that people believe them… and are willing to act to defend them.

P.S. If you like my reporting on this issue, send money. Unlike the New York Times, I’m not putting up a paywall – and I’m also not trying to bore you to tears in every article. I promise to spend most donations on cheap beer and steak. And hey… if you can’t send money now, at least share this article with some of your richer and more influential friends. Thanks!

P.P.S. Do you mind if I use the phrase “Catalonia declares independence” one more time? It’s for those damn search algorithms. SEO stuff. (For more about how to run a successful blog, check out my book The Zen of Blogging. It’ll leave you all warm and fuzzy inside… I promise.)