What a time to be alive!

The Catalan independence thing appears – for now – to be moving forward, but in the past week there have been some developments that are keeping things very interesting.

The promised declaration of independence didn’t happen “within 48 hours” like the Catalan government originally promised.

So here we are…

International news has picked up some fake and doctored photos of what happened during the referendum on October 1. Many viral photos of police brutality are actually completely unrelated protests years ago…

This isn’t exactly the first time the Spanish police have gotten out of hand with the use of force – it’s just not usually international news when they do.

In any case, many people (myself included) aren’t happy with the way this whole thing is being handled.

And I’m shocked and amazed by the comments I’ve received about how I’m one of the most objective “news sources” in this whole mess. About how people are waiting for my updates.

‘Cause I’m not objective at all… (and I can barely even bring myself to write in correct English, most of the time).

But I do think that politicos all over Spain are basically a bunch of d-bags. On that point I refuse to budge. Madrileño, Catalan, whatever… they suck.

And now that I’m autónomo and paying taxes out the hoo-ha, I’m gonna say it even louder.

I’m gonna enjoy telling it like it is down here.

Anyway, here’s my big update on the Catalan independence thing and Spain’s biggest national crisis since being eliminated from the last World Cup.

Or at least in one drove.

It started with Banco Sabadell.

Then La Caixa – the best or worst bank in Spain (depending on who you ask).

Most recently it’s Gas Natural. And there are some smaller companies joining in, too. 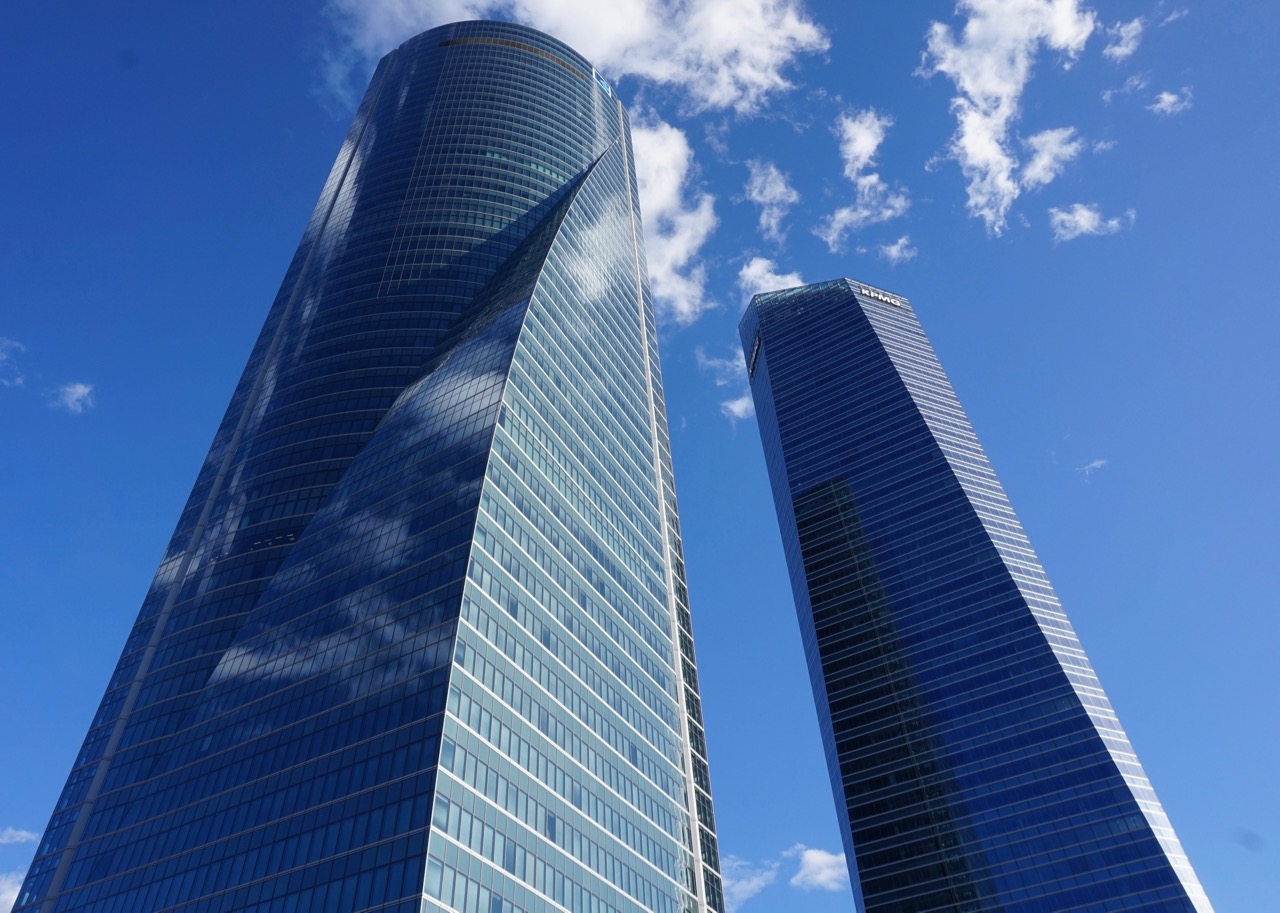 Two of the four towers of Cuatro Torres Business Area here in Madrid. Photo by the author.

Companies are leaving Catalonia as fast as they can – although I’m not sure if they’re actually “leaving”. They’re changing their “sede social” which as far as I can tell will have some tax repercussions – but doesn’t mean they’re actually sending thousands of employees elsewhere… yet.

(Maybe an actual economist will chime in and enlighten me.)

In any case, it seems like a vote against the whole independence thing, from people who actually have two nickels to rub together.

Banks need to leave Catalonia because they’re getting constant liquidity injections from the ECB – and if they suddenly end up outside the Eurozone, they’re outta luck.

On the other hand, non-financial companies benefit from the free flow of people and products within Europe – they don’t want to be in a newly independent state spending several years in legal limbo trying to get back into the EU.

One of the problems with democracy as we know it is that almost everyone votes based (at least partially) on their opinions about the economy, but few people understand basic arithmetic. Or human nature. Or psychology. Or politics. Or anything else.

As Churchill probably didn’t say, “The strongest argument against democracy is a five-minute conversation with the average voter.”

The last two Saturdays the whole area around Plaza de Colón has been shut down all morning.

And yesterday, October 8th, there was an even bigger protest going on in Barcelona – with Catalan flags flying right next to Spanish ones. The pro-unity people are out in force.

And here in Spain, the thing about flags is a bit different than in other places.

Showing a Spanish flag here means you could be called a fascist.

I myself am hesitant to do it.

And I don’t mind being called an ignorant asshole.

But fascist is where I draw the line. I’m actually a pretty liberal guy. The thing is, in Spain it doesn’t matter. You’re a facha if you show the flag for anything besides a football match.

When the Barcelona terrorist attacks happened, guess how many people put the Spanish flag filter over their profile pic on Facebook.

Instead, they came up with cute caricatures of the Barcelona skyline and Sagrada Familia cathedral.

I heart Barcelona, they all said.

Because if you heart Spain, you must be a closet Francoist.

Anyway, I heart Spain, and here’s the Spanish flag…

Pro-unity protesters in Madrid, 30 September 2017. Photo by the author.

Moving on to happier things…

What about the other protests?

I didn’t see it, but according to El País there was another big protest on October 7th, organized by a new movement called ¿Parlem? ¿Hablamos?

Let’s talk, in other words.

Protesters were encouraged to go in white t-shirts, and leave all flags out of it – to encourage understanding and dialogue between the sides without calling on nationalism.

A country better than its ruling class.

That’s something I can stand behind.

The whole Catalan independence thing seems to be led by a few private school kids (now in their 50s) with bad haircuts, playing revolutionary because they know there’s a 0% chance they’ll be lined up against the cemetery wall and shot.

On the other hand, the national government here in Madrid is made up of vapid grey-skinned zombies with patchy hair and blank expressions – nobody likes them either.

And let’s not even talk about the “third” parties.

Being better than those d-bags should be easy-peasy-lemon-squeezy, as the kids are saying these days.

From here, it looks like there are thousands (or millions) of people on all sides of the issue. We’ll see if enough of them want to be reasonable – and if the government listens to them in the end so we can move on, somehow.

Originally the Declaration of Catalan Independence was planned for early last week. Then it was pushed back to Monday…

The Catalan parliament is scheduled to meet then, and they might make a “symbolic declaration of independence” – whatever that means.

Meanwhile, the government here in Madrid is trying to figure out ways to stop them.

I hesitate to say more because it would require reading a lot of stuff I barely understand about Spanish Constitutional Law.

But in case you’re wondering, I think the eventual solution to all this is to amend the constitution and allow the Catalan people to vote in an organized, legal way.

The can of worms has been opened, and I think that’s the only way forward from here.

In any case, with all the chaos and incompetence at all levels of the Spanish government, changing the Constitution could take years…

And what happens in the meantime is anyone’s guess.

What do you think? Let me know, right here in the comments.

P.S. If you want more about this Catalan Independence topic as it develops, just let me know. I’m happy to do what I can. But I just gotta say: god help us all when Mr Chorizo is being called “reasonable” and a “news source”…

P.P.S. When I call members of the Spanish government incompetent d-bags, of course I’m not suggesting that other world governments are free from such things. Y’know. I could probably come up with a few notable examples from my own country. But that’s another story.