Is Usera neighborhood the next Lavapiés?

Have you ever been to the Usera neighborhood south of the river?

This one’s by Felicity Hughes of the blog The Making of Madrid.

If you want to write something for me, just let me know. All I ask is that it’s useful or entertaining and on a topic related to Madrid or Spain.

And so without any further ado…

Welcome to Usera, in the South of Madrid

Back in the ’90s, garrets overlooking Plaza Dos de Mayo went for a song, making central Madrid a totally affordable option for the starving artist.

Sadly, gentrification is now pretty much a lock in Malasaña and it looks like Lavapies is set to follow down that same dark path, forcing many to look further afield for accommodation.

After the Usera neighborhood ranked tenth on Airbnb’s global list of 2017’s Neighbourhoods to Watch, many eyes have been fixed on this burgeoning multicultural district.

Just south of the Manzanares River, the area has become a haven not only for large communities of Chinese and South Americans, but also for young Spanish creatives.

So, is the Usera neighborhood the next best thing to Lavapiés?

Well, yes and no…

Rents are significantly cheaper here, so if you’re finding yourself priced out by the recent rental hikes, Usera makes an affordable alternative.

Good transport links means that you can get to the centre in under 30 minutes, so as long as you have a travelcard you won’t miss out on anything Madrid has to offer.

However, it’s important to bear in mind that this isn’t the prettiest place to live, with the absence of the elegant late 19th century buildings that line the streets of central Madrid keenly felt.

That aside, there are many benefits to living out on the furthermost edge of Madrid proper. Let’s see…

A Chinese community of over 6,000 ensures that the very best Chinese restaurants (and supermarkets) in the city can be found here.

Not only that, but you’ll often find yourself paying half of what you might for a meal out in the centre.

Currently trending after a rave review in El Pais is Lao Tou. Try the cashew nuts and prawns or the spicy fish head soup. To amp up the spice quotient even further check out Sabor Sichuan.
Their twice cooked pancetta, peanut noodle soup, and mapo tofu will get your lips singing.

During Chinese New Year celebrations, you can go restaurant hopping by picking up a gastronomic passport and sampling a tapa from each of the many restaurants that take part.

Just make sure you arrive with an empty stomach! 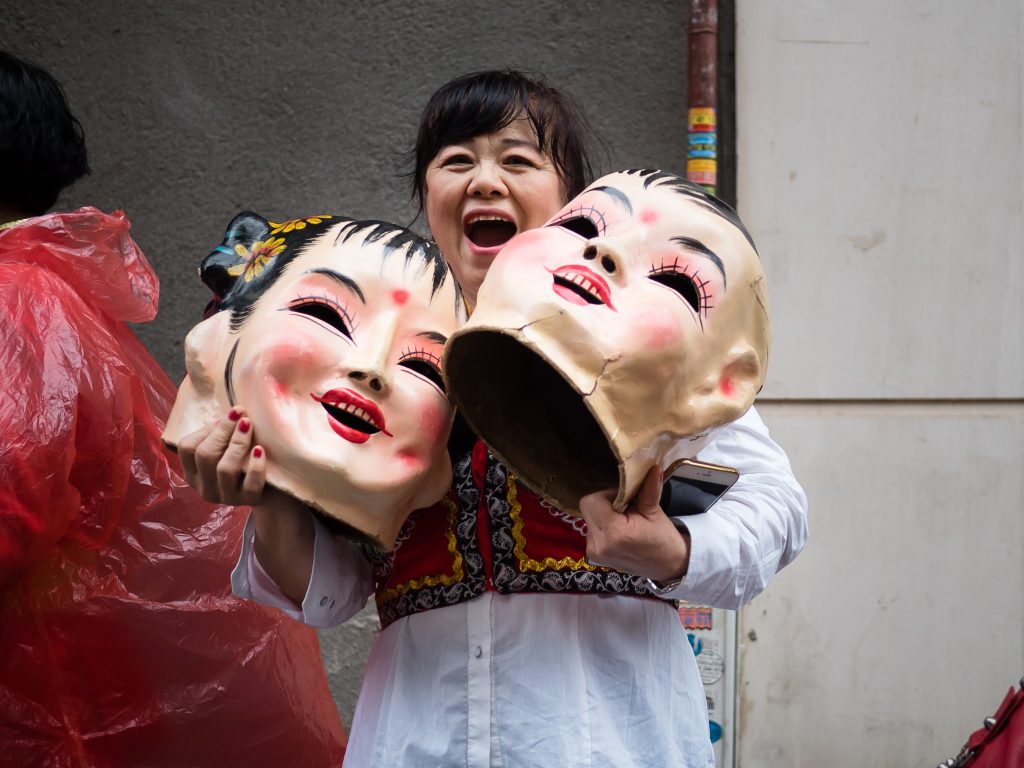 Chinese New Year celebrations in the Usera neighborhood of Madrid.

There are many South American options too, my favourite being El Norteño.

This Peruvian restaurant does a great menu del día for just eight euros, which often includes ceviche and causa among other dishes.

Located in a community centre, it has a lovely terrace that faces out onto Pradolongo Park. And that takes me to another great thing Usera has going for it…

Go down to Pradolongo Park on a weekend and you’re in for a big surprise, for it’s here where huge groups of South American residents gather to party. Expect loads of loud music and dancing. 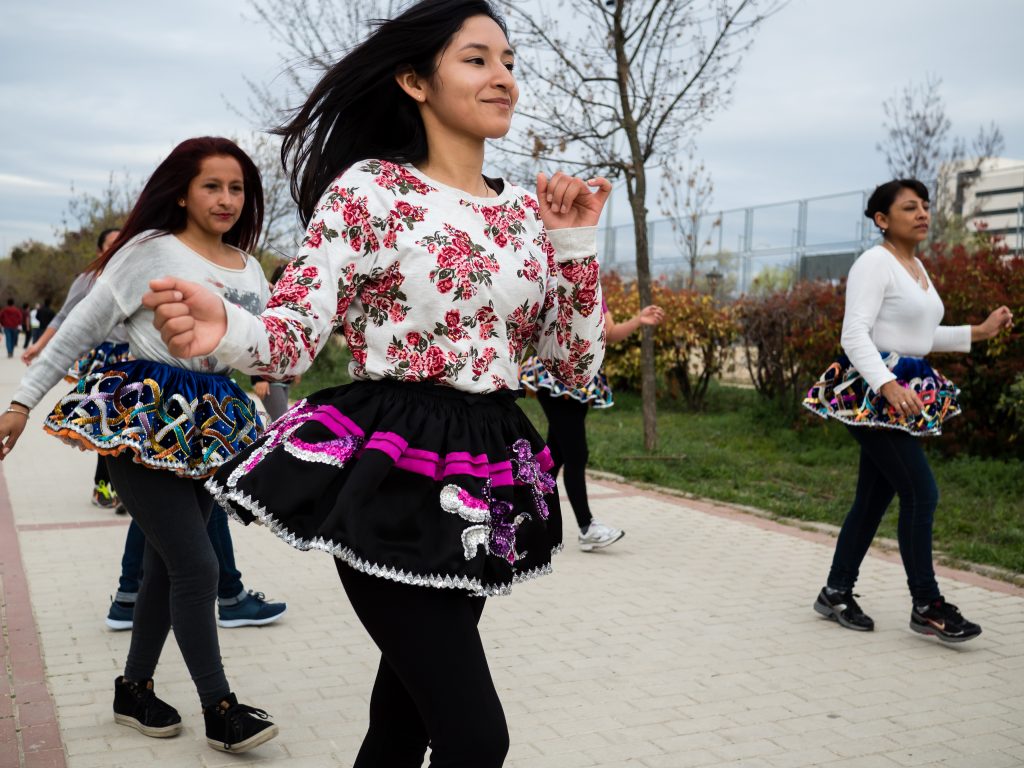 If you’re lucky you might pick up a home-cooked empanada for cheap (highly illegal but highly delicious).

The other major park is located in what some term “posh Usera”, that is the area closest to the Manzanares River that is now filling up with new build apartments that have their own pools or paddle courts.

Part of Madrid’s Anillo Verde (a circular route for cyclists), Parque Lineal del Manzanares is a well-groomed leafy spot. Don’t miss climbing up the hill to the giant metal head for a bird’s eye view of the city.

This very same sculpture is illuminated at night making it one of Usera’s most iconic sights.

Usera now boasts of not one but two artists’ coworking spaces.

Having just celebrated their third birthday, Espacio Oculto is more established, but it has to be said that the new kid on the block, Área3, seems to be killing it, mainly in terms of the insane parties they’ve recently held.

In April, Usera’s two markets get taken over by artists, utilizing empty spaces for temporary installations as part of the Luminaria festival.

Visitors to previous editions have witnessed interpretive dancing past the fishmongers and an entire store transformed into a pinhole camera. 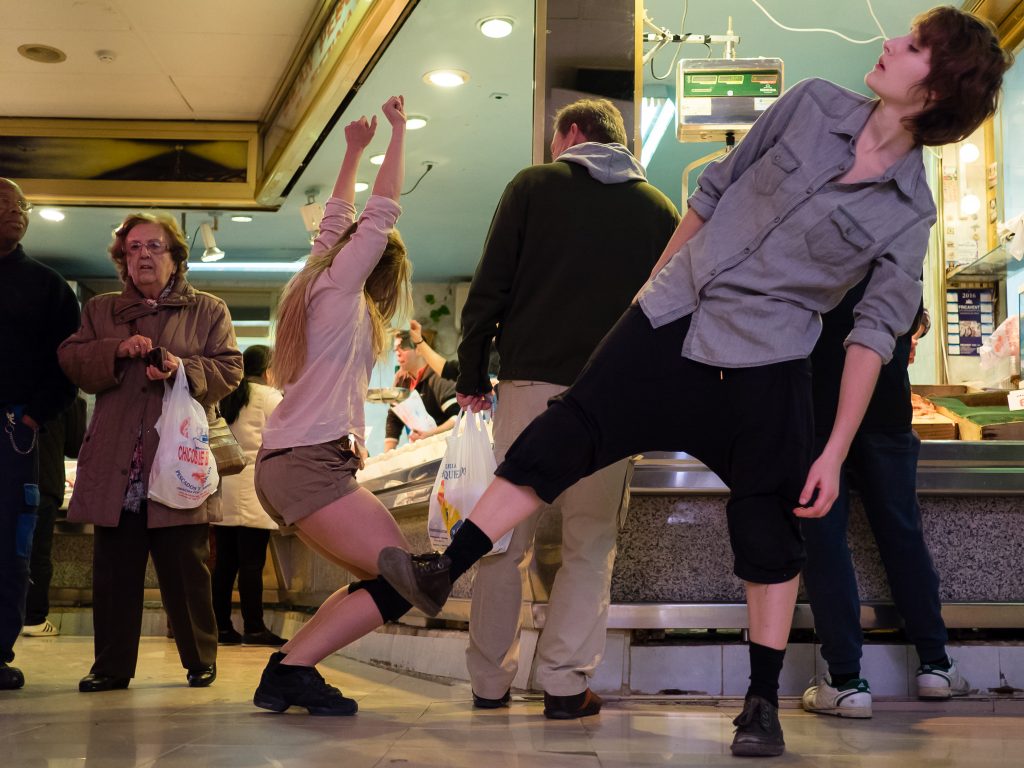 Seaven Dance Company – interpretive dancing past the fishmongers at the Luminaria festival.

And finally, the Usera neighborhood has…

Some cool places to hang out

If you enjoy a game of billiards, you’re in for a treat as there are several halls catering to a young mainly Chinese crowd. On summer nights the open air Cine Usera holds screenings of popular and classic movies that are free for all.

Finally, a note of caution; while Airbnb listed one of Usera’s benefits as being a “lively café scene”, this description stretches the truth more than a little. The reality is that most of the café / bars in the district jump more to the incessant jangling of slot machines than to the latest tunes.

However, hipsters searching for sanctuary can enjoy a matcha latte in an inoffensively beige environment at the recently opened iCafé or alternatively head just across the river for a fix of culture and caffeine at the Matadero arts centre.

Writer’s bio: Attracted by the low cost of housing and unlimited availability of cheap dumplings, Felicity Hughes has lived in Usera for five years. She originally hails from the UK and is the author of The Making of Madrid, a blog about the chequered history of her adoptive yet much-loved city. I especially like her article 5 things you many not know about Franco.

Final note from Mr Chorizo: I really like Felicity’s blog because of the research she does. There aren’t many bloggers who are so in-depth about the history of Madrid and Spain. Anyway, I’ll probably be doing more articles about Madrid’s barrios in the near future. For now, here’s one about La Latina. Also, what do you think? Is the Usera neighborhood on the rise? Is tourism killing Madrid? Hit me up right here in the comments… Thanks!