All the latest news from Spain – Dalí’s corpse, Catalonian independence, and terror in Barcelona

It’s been quite a summer.

And the news from Spain is looking grimmer than ever.

Everyone’s favorite surrealist Salvador Dalí quite literally got rolled over in his grave, Catalonia might become independent, and we’ve had our first major terrorist attack in years.

I don’t know about you…

But I can’t wait for autumn.

Recently, Salvador Dalí’s body was dug up as part of a paternity suit brought against his estate by fortune-teller and mystic Pilar Abel.

According to Abel’s version, it was known all over Figueres that Dalí was sleeping with her mom.

Dalí died without leaving heirs, so Abel would stand to inherit a quarter of Dalí’s massive fortune if DNA tests were positive…

But unfortunately (for her) they weren’t.

My favorite aspect of the story is that apparently, Dalí’s moustache is still in perfect shape, 3 decades after his death.

Of course, Dalí was also a fascist and an all-around d-bag. But it would seem that the plans to change the name of his plaza in Madrid (as well as the names of many other streets and squares named after old-time fachas) is going nowhere.

I mean, Google Maps changed a few of them.

But as far as I can tell, none of the signs have been changed as of today.

Looks like it’s in the courts until further notice.

In other news, it looks like there may or may not be a referendum on Catalonian independence on October 1.

And apparently the constitutional courts are going to decide whether it actually goes down or not in the next few days.

My personal opinion: it’s not quite clear who would really benefit from Catalonian independence. Maybe some of the local politicians would be able to more effectively line their pockets and fill their Swiss bank accounts.

But other than that, it looks to me like another Brexit-style clusterfuck that’s being rammed down the throats of the uninformed.

(Update, 3 October – shit just got worse up there.) 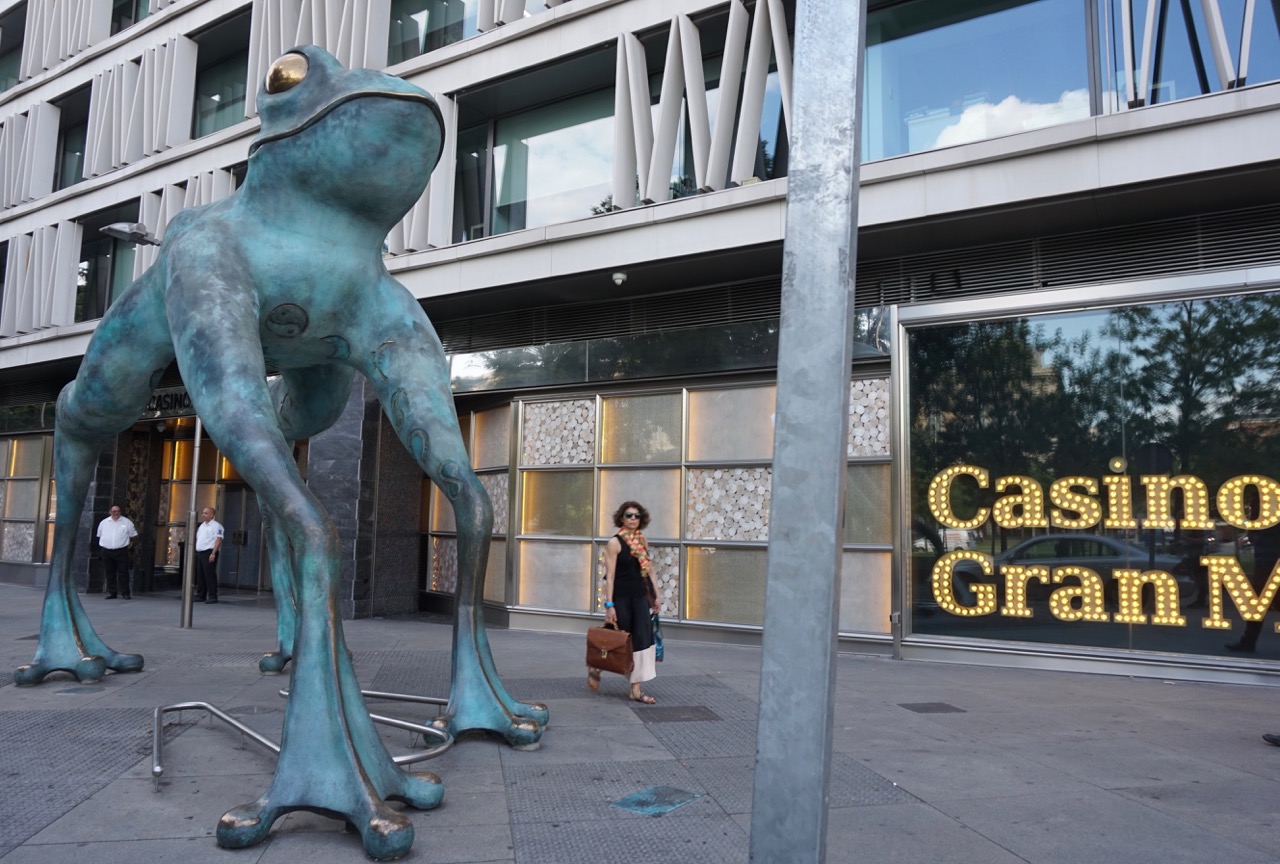 This frog doesn’t have anything to do with news from Spain, but he’s there outside the Casino in Colón – right here in Madrid.

I’m no expert on Spanish politics.

I’m just waiting for the big meeting between Rajoy and Trump at the white house. It’s hard to imagine two less-loved world leaders in a room together.

(Even Kim Jong Un’s got groupies, I bet.)

Is all the news this summer coming from Catalonia?

A couple weeks ago I wrote about whether or not tourism tourism is ruining Spain.

The article was very popular for about a day and a half – until some truly awful shit went down on Las Ramblas in Barcelona.

In about 2 minutes, the anti-tourism protests became yesterday’s news, as 13 people were killed (and more than 130 injured) by a van driven by some brainwashed 22-year-old loser.

While I slept that night, the Mossos shot 5 of them in a nearby town. Apparently, they had been planning to blow up the Sagrada Familia cathedral.

A few days later, the original driver of the van was shot as well.

So how was your summer?

I guess the weather will be cooling down soon.

So… no more beating the heat. Time for some buñuelos, prawns and Christmas lottery fever.

Soon, I’ll have an article I know you’ll just hate… Unless you’ve actually been around for a while.

In the meantime, I’m about to celebrate 13 years living in Madrid.

Seems like I’ve lived here half my life, but actually it’s only a bit over a third. What have I been doing all this time?

Well, sort of a lot, as it turns out.  Check out my new book The Zen of Blogging for more about that.

P.S. I hope you enjoyed this news from Spain. How was your summer? Let me know, right here in the comments… Thanks!