Adventures without running water in Madrid – Spain is different

I wake up in a pool of sweat.

“Disgusting” would be putting it nicely.

The sun’s first rays blasting in through the window next to my bed. Another sweltering summer morning.

Can’t rule it out, anyway.

Another day. Back to the grind. The pro blogger hustle.

I delay getting out of bed for about three minutes – time enough to check my Instagram likes and look at a few bikini photos by people who had the good sense to get out of town – before pulling on a pair of old shorts and heading to the kitchen.

I grab the little cafetera and turn on the tap…

But it just gurgles and spits a few warm drops.

Last year I spent a whole month without a steady supply of running water.

We had a leaky pipe in the restaurant on the bottom floor, and those of us who lived in the building were only able to use the water a few hours a day.

It was supremely annoying for a couple of days… until I got used to it.

After that it was just embarrassing. 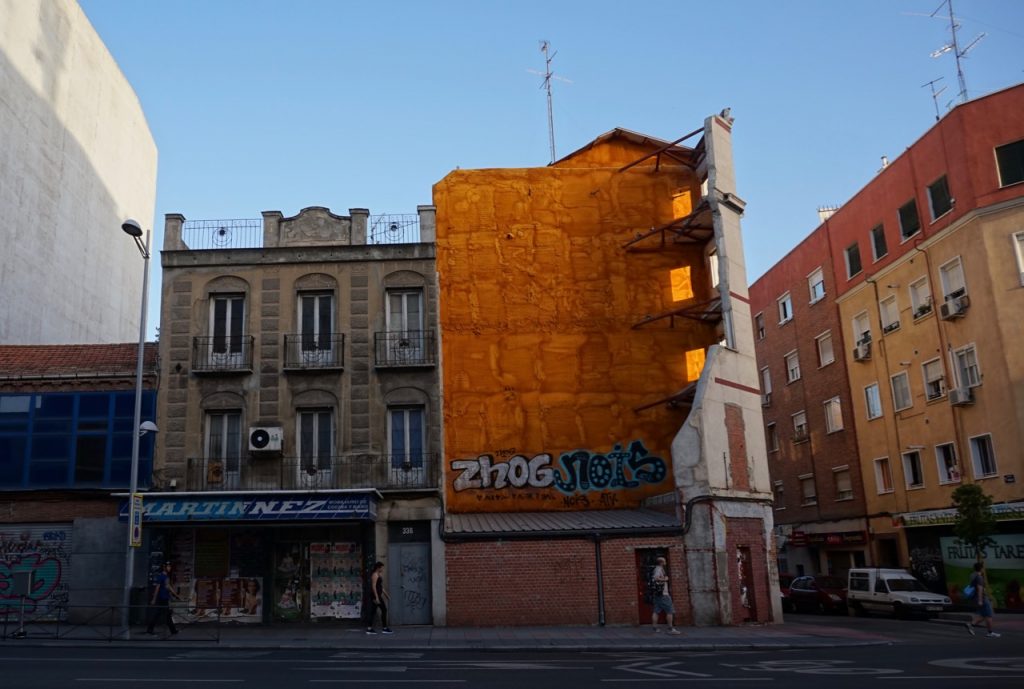 This building is right here in Tetuán, a couple blocks from my house… and guess what? It recently collapsed. Just a shell now.

Nothing to do but buy a few 5-liter bottles at Mercadona and get familiar with all the public bathrooms in the area.

I had houseguests from the north of Europe who dealt with it pretty well. I tried to assure them that no, Spain isn’t always like this.

Our infrastructure rivals that of other semi-civilized countries like Slovakia and Kazakhstan. It’s just my old building that has the problem.

Flashback over, we return to the present

I turn off the tap.

Coffee’s out of the question.

As it turns out, so is a drink of water. I have an empty bottle on the counter. A half glass of wine in a bottle. And some beers in the fridge.

I decide to cut my losses and just drink the wine.

(It’s only half a glass and the bottle’s been sitting open… but cracking open a beer at 8 AM is still too much drunkenness even for Mr Chorizo.)

Turns out 2 euro wine isn’t improved by sitting open for a day.

Ok, well, let me just go wash my face and go to a café for breakfast.

Well, at least let me do something about my hair. I look like an escaped mental patient, with half of it sticking up on the side.

You get the idea. Running water is something you never think about until it’s suddenly gone. Do I really turn on the tap 100 times a day, or does it just seem like there are a hundred things I can’t do the second the water supply’s cut off?

On the upside, I’ve discovered what smells like death – it’s all the inedible parts of yesterday’s chicken, that are rotting in the garbage can in the 95 degree heat.

Thank God for the little things. ‘Cause that I can just throw out.

Escaped mental patient hairdo and all.

What would Jocko do?

Recently I’ve been listening to the Jocko Podcast, where Jocko Willink – former Navy SEAL – and his Jiu Jitsu buddy Echo Charles sit and talk about war for three hours an episode.

War, leadership, squats, business and getting after it.

Listen to any one of the episodes where Jocko reads about combat, or prisoners of war, or the Holocaust.

(That last one I couldn’t even listen to, even though it’s about one of my all-time favorite books.)

Think The Exorcist is scary?

His delivery is amazing. And terrifying.

One of my favorite moments from a recent episode: I guess somebody asked the question about what to do if they “don’t have time to work out”.

And Jocko said something like, “What do you mean you don’t have time? How long does it take to do a couple hundred pullups? You can knock that out in 15 minutes!”

Maybe he can. For me, a couple hundred pullups would be 4 to 5 weeks’ work. But knowing that somewhere out there, there’s a guy who can do that in 15 minutes is pretty damn inspiring.

Gives me the feeling I’m doing nothing with my life.

Which quickly transforms into the urge to do much, much more.

I spend the morning getting after various writing projects in the lobby of the hotel down the street.

I make some progress on my SEO goals.

At some point, I find that my online arch-nemesis is outranking me on Google with some really bad articles in barely-comprehensible English

Google is a fickle mistress. Maybe it’s the algorithm.

But that’s just an excuse.

My online arch-nemesis must be crushed. 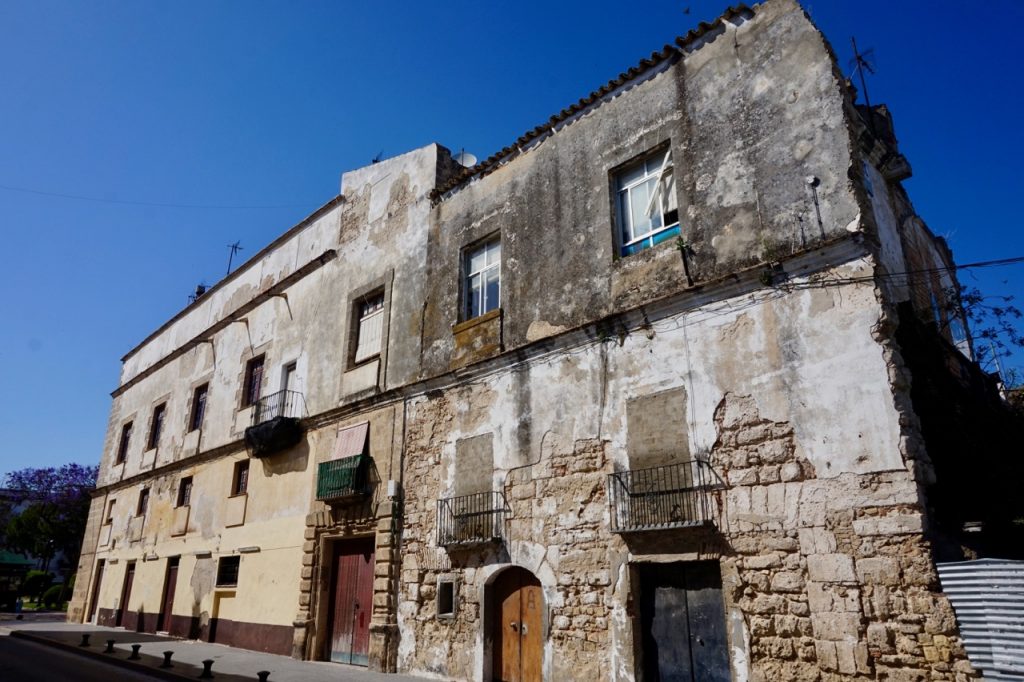 Dilapidated in Puerto de Santa María, Andalucía. (Actually, most of the town looked like this.)

As Jocko would say, the enemy is out there. He’s been up since 4 AM. He’s cleaning his machine gun. He’s doing pushups on the floor of his cave (or his shitty sublet). He’s sitting on his heels, rocking back and forth, picking out the best keywords for Google and contemplating how to destroy you.

In other words: he’s been getting ready for battle all morning.

Some day you’ll meet your enemy. And then, the only question is… will you be ready?

Not the most positive thoughts to have on a Wednesday morning.

Life is not a Huggies commercial

In fact, I’d say there’s more of the Darwinian struggle for survival still going on than most people are comfortable admitting.

And the struggle inspires me.

As Jocko would say, GOOD.

I get home and the plumber is there. He says we’ll have limited water today, and the whole thing could be solved in “a few days”.

Of course, on Spanish time that could be weeks.

(Don’t believe me, just ask any Spanish person. In these parts, mañana means whenever I feel like it – how ’bout next Friday? Or maybe September?)

In any case, I’ve had a good morning writing, and I realize that the low level of irritation – no water plus the urge to crush my online arch-nemesis – has made me feel like going to do a hard workout.

I’m still sweaty from last night, and probably won’t be able to shower after, but hey.

There’ll be water again at some point.

Keep in mind that I don’t really believe in “wanting” to work out.

I hardly ever “want” to work out. And listening to your body is bullshit. ‘Cause my body just wants to sit around and eat donuts.

And I go do it anyway

A few minutes later I’m in the park – just a sweaty guy in a dirty t-shirt who still looks like an escaped mental patient.

But this time in running shoes.

After a short warmup, I’m sprinting along one edge of the park like my life depends on it.

Actually, I always imagine it’s the Stone Age and there’s a sabertooth tiger after me. My tribe is at home hungry. And if the sabertooth catches me, it’s over for them too.

The image gets me running just a little bit faster, 100% of the time.

I sprint till I’m about to pass out in a puddle of my own vomit. Then I drop down on the grass for a few sets of pushups and some mobility work.

It’s pushing 100 degrees now, and I’m the only one exercising in the park. A few cute couples are having picnics in the shade, but most inhabitants of this ghost town are staying home till dark – or already on vacation.

By the time I get home again, I’m feeling the burn. And the plumber announces he’s turning on the water for half an hour.

Guess I’ll be getting that shower after all.

P.S. Did I really just write 1400 words about having no water today? Guess so. Are there going to be people who don’t like this article? Probably. Know what? GOOD. Hit me up in the comments and tell me what you think.