Adventures with Customer Service in Madrid

The other day I went to the doctor’s office.

Really, I just want to see if my private insurance will get me into the clinic.

And less than a minute later, I’m whisked into a little room where an emaciated 72-year-old man sits behind a desk.

Who just stares at me.

No buenas tardes, no nothing.

I tell him what I’m there for – just a blood test to make sure everything’s working well on the inside. I tell him I’m generally healthy, despite the inexorable march towards impotence and death that is the fate of any man in his 30s.

He silently reaches for a notepad and writes a long, indecipherable paragraph in tiny block caps.

No hasta luego, no nothing.

I guess I should say that I might have this effect on people because they see my blue eyes and red beard and immediately assume they’re going to have to speak English with me.

I’ve been speaking Spanish on the daily for more than a decade… but they don’t know that.

And maybe the terror of having to confront their life-long failure to learn more than 200 words of a foreign language makes them freeze up and go silent.

Or maybe they’re just not too friendly with strangers. 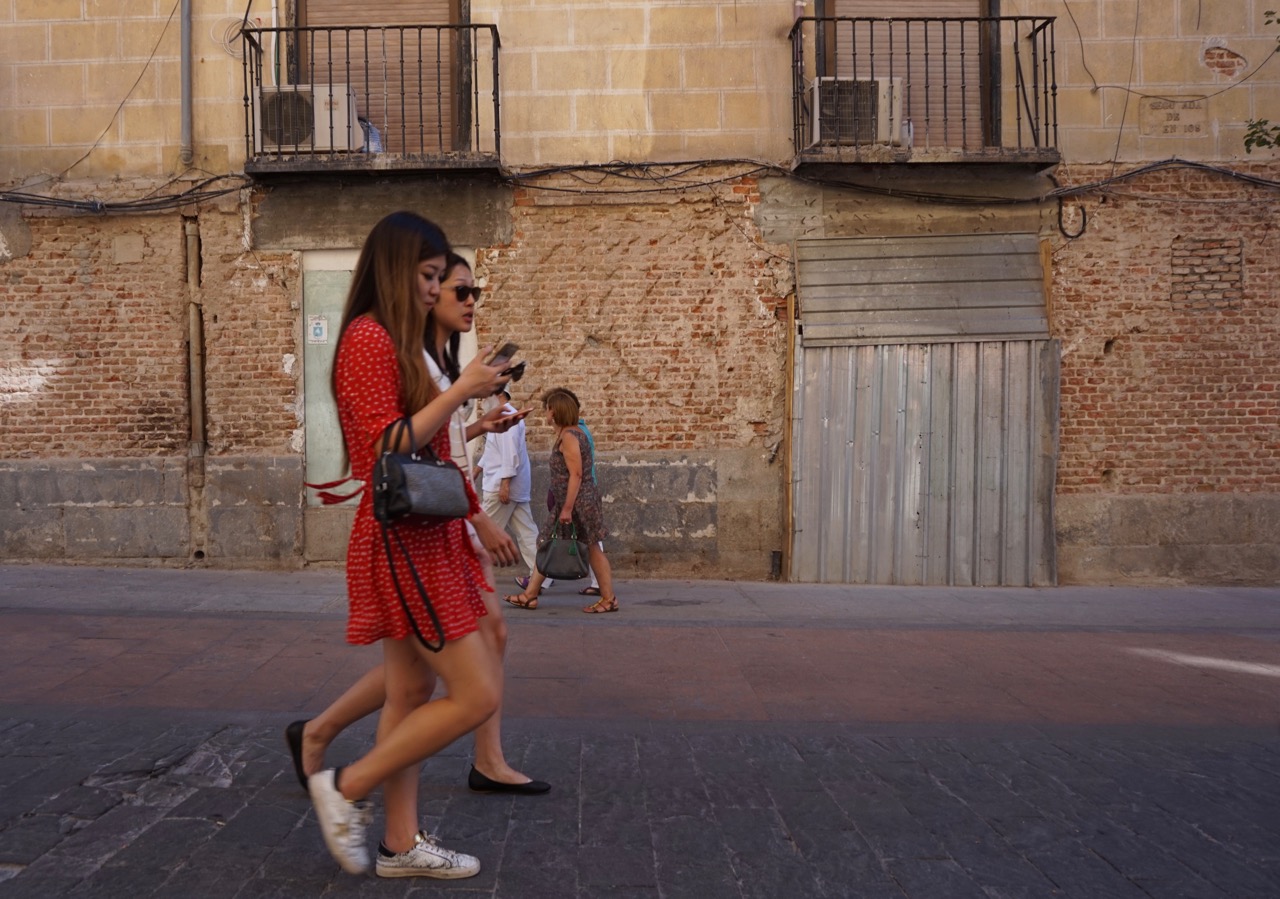 These girls aren’t Spanish and (probably) don’t work in customer service. But I had to use some sort of photo here. This is Calle de Santiago, Madrid.

More adventures with customer service in Madrid, this time inside a couple of our fine financial institutions…

Adventures with customer service in Madrid – at the bank…

Banco Santander spent half the spring remodelling its office down the street.

It was closed for a while, and I hadn’t really needed to go in anyway.

When I finally did, I found that the customer service area had been replaced by a waiting room with a coffee machine and those hard modern couches in geometric shapes… totally uncomfortable.

At the door, there’s an iPad where you have to enter your name, National ID and reason for visit in order to get a number.

And there’s an old woman who’s obviously never used an iPad before struggling to get through the whole thing.

I help her out. She gets her number and I get mine.

I sit on the hard geometrical couch for a few minutes until it becomes obvious there’s nobody actually working anywhere in the branch office.

They’ve just done a clever job of hiding tellers in cubicles, where they do nothing – and make the customers talk to the iPad about it.

So I get up and go to another bank.

And at the other bank…

But I just need to pay the fees for my visa renewal, so it’s no biggie.

The reason why I opened the account at La Caixa is that back in the day they were the only bank that’d work with my 9-digit passport number.

Other banks had refused.

Eight digits or no deal.

Still, the woman who opened my account had to call her manager to figure out what to do with my single last name. Spanish people have two. I have one.

Correct answer: just put a period or an asterisk or the letter x in the second last name field on the computer.

(This is a big enough problem that I’ve been interviewed by El País about it.)

Anyway, the reason I’d stopped using La Caixa is because I moved out of that neighborhood. But every time I tried to go to a branch office near my new house, they told me to go to “my office”.

La Caixa has been voted “best bank in Spain“. But apparently they’re working under the assumption that it’s still the 1940s and people spend their whole lives living on the same street. When they get married, they buy the flat next door to mom’s house, so they can go over for paella every Sunday.

So logically, they know the fishmonger’s grandchildren, they’ve been hanging out at the same corner bar every afternoon for 35 years… and they have no problem with a national bank refusing to serve them in any but one of their 5,251 offices.

Today at La Caixa, there’s a big guy in a suit at the door. He takes my ID an tells me I should go to my office on the other side of town.

I insist. I tell him that I haven’t been to that neighborhood in 7 years, and that if they’re truly the best bank in Spain they should be able to deal with the fact that Spain has more than one neighborhood.

So he passes me to a frail woman who fails for 20 minutes to do what could be done in one – if the computer were working.

Banco Sabadell always works. You just have to stand in line behind all the old people.

En fin… is customer service in Madrid all bad?

I should mention that Spanish people are usually thoroughly decent once they get to know you.

My butcher and baker know me by name. My fishmonger asks me about Trump’s latest crisis as he guts my sardines. The girl who makes my coffee in the mornings got ridiculously friendly after I’d come by about 5 days in a row.

My constantly-breaking flat has been visited by a long line of polite and highly competent repairmen, and I’ve even had friendly treatment at Aluche.

But still… Customer service can be kind of annoying sometimes. Just check out Klara’s article for more about that: You’ve been Spained.

P.S. What do you think? Am I wrong about customer service in Madrid? Am I an entitled asshole for thinking people should acknowledge my basic humanity if I’m giving them money? Are you a Vice President at a Spanish bank who wants to apologize for all the problems I’ve had? Either way, hit me up, right here in the comments…

P.P.S. Here are some more observations about Spanish culture, if you’re into that kind of thing. And here’s a bit about cultural differences between Spain and the US. Have fun!