The 5 best books about writing – advice from top authors

People have been asking…

And I live to please. So here you go: these are the 5 best books about writing that I’ve read up to now.

In the course of researching for this article, I came across one of those pretentious Brits who wrote an essay beginning with “Americans, who think that writing is a skill that can be improved…”

Pffff. I almost spit out my beer.

Of course it’s a skill that can be improved, numbnuts.

You weren’t born doing it, then you learned. And now, you’re getting better at it, or you’re not. You can become a better writer – mostly, by reading and by writing.

Anyway, two of these books probably don’t deserve to be included in the best books about writing.

But I’ve read them on the recommendations of some pretty intelligent people. And who am I to argue?

This one’s my personal favorite book about writing – and I haven’t read any of King’s fiction since I was a teenager. Initially, I was suspicious of the whole idea of someone so “popular” writing a style guide.

And I was wrong. It’s great.

The first part of the book is his life story, which is pretty interesting in its own right. And in the second, he gives some really good advice for writers.

It’s also very interesting to me what he says about plot. Because really, he doesn’t believe in it. He believes in characters, in putting those characters in a situation, and then just writing to figure out what happens to them. He doesn’t believe in structure, because life is basically unstructured and meaningless.

Also, you can’t argue with his success… He’s about as well-paid as anybody (except Rowling and probably a couple of others) and the story of how he escaped from his working class trailer-park life in Maine is amazing.

I gotta hand it to him.

Writing Down the Bones – Natalie Goldberg

Natalie Goldberg basically got me started as a writer way back when I was just a college dropout with a 69 cent notebook from Safeway.

This book is mostly about free writing – set a time, let it flow, don’t censor yourself. Let it come out… whatever “it” is.

For me, it was the permission I needed to break free of the writing I’d always done for school and hated: 5 paragraph essays with thesis statement, point, point, point, conclusion.

I filled notebooks and notebooks with free writing back in those days, and then made zines out of what I had written. Some of them (most of them?) were probably pretty awful… One reviewer said “This guy mostly writes in a stream of consciousness style that just won’t stop.”

Either way, I was free from the five paragraph essay, and I’ve never looked back.

Here’s the link: Writing Down the Bones. 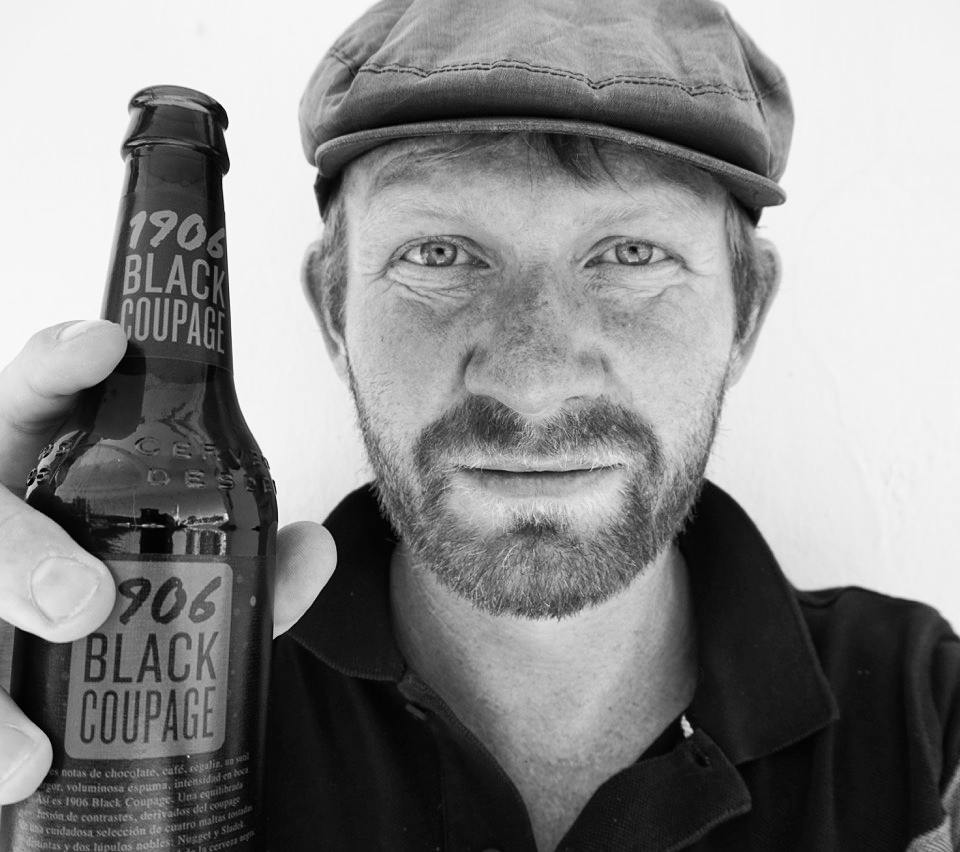 Hydrating with beer will NOT make you a better writer. But it is sometimes fun to do on a hot digital nomad day in Andalusia.

This is maybe not one of the best books about writing, per se.

But shit. This woman is miserable and angry and really suffers to see her friends succeed as writers.

My response: I don’t have a huge number of friends. There’s room in the world for all of us to be wildly successful writers.

And hey, all of my ex-girlfriends and most of the people who I’ve ever worked with or had lunch with could also become successful writers and I wouldn’t expect it to ruin my life.

If anything, they’ll get big fat publishing contract, and then I’ll be surrounded by successful writers… and how could that possibly be bad?

Anyway, the title is the only useful thing as far as I can tell: it means, basically, you should just take things one at a time. Create the larger whole out of the smaller details. Take it bird by bird.

If you wanna read it, I’m not gonna stop you: Bird by Bird.

Elements of Style – Strunk and White

I guess I’m almost the only one who doesn’t like this book much.

If you want to know, the only thing I ever got out of it was “Omit needless words”.

See what they did there?

Rather than saying “Don’t use any words you don’t absolutely need to express what you’re really trying to say” or some such, they distilled it down to only three: Omit needless words.

From there, it’s all downhill…

For example, they recommend using “persons” instead of people, for reasons that make no sense – we might as well say “childs” and “tooths” while we’re at it.

Either way, it’s a short book: Strunk and White will only take a couple of hours to read, so I guess that’s the main thing it has going for it.

And also, props to Steven Pinker for tearing these guys a new one in the introduction to his book A Sense of Style – I never would have done it on my own. But he’s Steven Pinker.

Here’s the link: the famous Strunk and White. 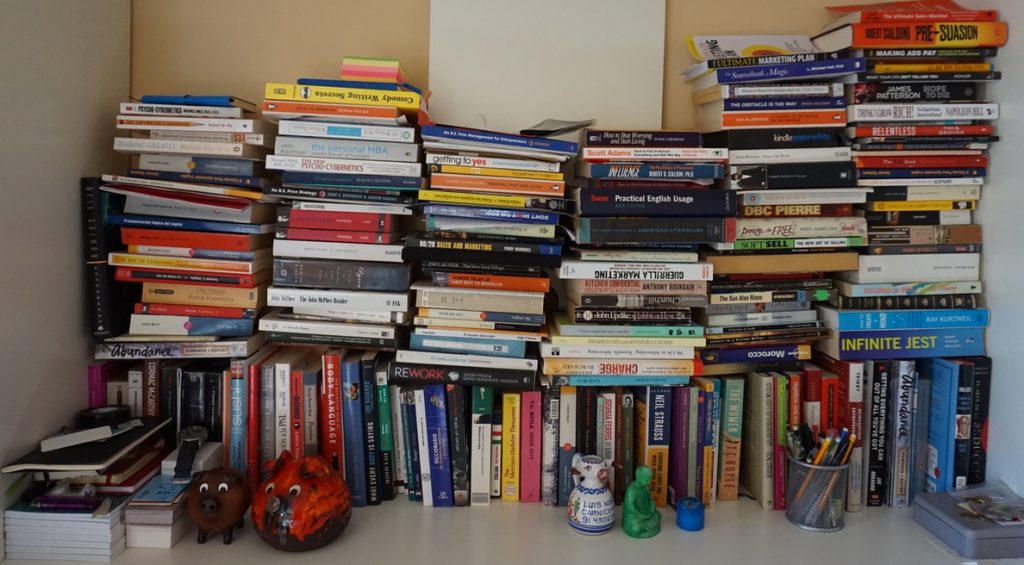 Some of my books at home. And also, my small collection of piggy banks. Two and counting!

I saved my second-favorite for last. (My favorite is Stephen King, and if you’re only going to read one of these books, I’d make it that one.)

Anyway, this book has a lot of good advice about writing in a wide variety of styles… humor, travel writing, memoir and more.

There are also examples of before and after the editing process (hint: good writers are good re-writers, and nobody’s a good writer on their first draft) and some insights into the thought that goes into any well-written piece.

Actually, some of the writing in Zinsser’s book makes me feel terrible, because I know it’s very unlikely I’ll ever reach that level.

But then he explains the process – working two days to get a single sentence perfect, or whatever – and I realize why: I’ve never spent as much as 10 minutes on a sentence. I guess I’m still just letting it flow (with, of course, some editing afterwards).

Here’s the link: On Writing Well.

Neil Strauss writes some really interesting stories – mostly ghostwritten autobiographies of rock stars and Jenna Jameson – and he tells a few of his secrets here: Secrets of Addictive Writing.

The best part of that, for me, is his philosophy of “nobody cares”.

Nobody cares about you or your thoughts or what you did yesterday. And from there, how can you make them care?

That’s a big one.

And as far as I remember, I’ve never read anything by Elmore Leonard. But I love his quote: “If it sounds like writing, rewrite it.”

(Well, maybe not always. But it works out pretty well a lot more than you’d think.)

So… what do you think? Got any favorite advice for writers?

Hit me up, right here in the comments.

P.S. Honorable mention among the best books about writing to Elizabeth Gilbert and her book Big Magic, which does a lot to bring down that annoying myth of the suffering artist, and has some pretty good things to say about creativity and the process. If you don’t like writing, at least part of the time, you should probably quit and get a “real job”. And please, don’t get into abusive relationships or start doing drugs because “you must suffer to create”. Life will throw suffering your way on its own, trust me.

P.P.S. Two other lines I like from Stephen King’s book: “I believe the road to hell is paved with adverbs, and I will shout it from the rooftops.” And this little gem: “If you expect to succeed as a writer, rudeness should be the second-to-least of your concerns. The least of all should be polite society and what it expects. If you intend to write as truthfully as you can, your days as a member of polite society are numbered, anyway.” Don’t I know it.

How to be a respectable travel writer – in 8 easy steps

The shocking secret about my 2017 plans – Revealed!