Spain’s Controversial Fiesta – how I learned to love bullfighting

Ladies and gentlemen, I have a confession to make: I like bullfighting.

I like the colors. The choreography. The ritual. The tradition. The whole wild spectacle.

Anyway, you should know I wasn’t always this way.

In fact, I still remember the first time I saw a bullfight.

I was at my student Manolo’s house giving a lesson one night. It must have been soon after I arrived in Spain.

When we finished class, we went out to the living room where his parents were watching one of the San Isidro bullfights on TV.

Manolo’s dad waved to me to sit down next to him on the sofa. I had just arrived in Spain and was somewhat amused to discover that bullfighting was still a real practice in the 21st century.

Of course, I didn’t know what to expect.

The Hollywood films I had seen made it look like a dance. They never showed more than a few seconds of a bullfight, really. And of course, in Hollywood, there was no blood.

“No animals have been harmed in the making of this film.” 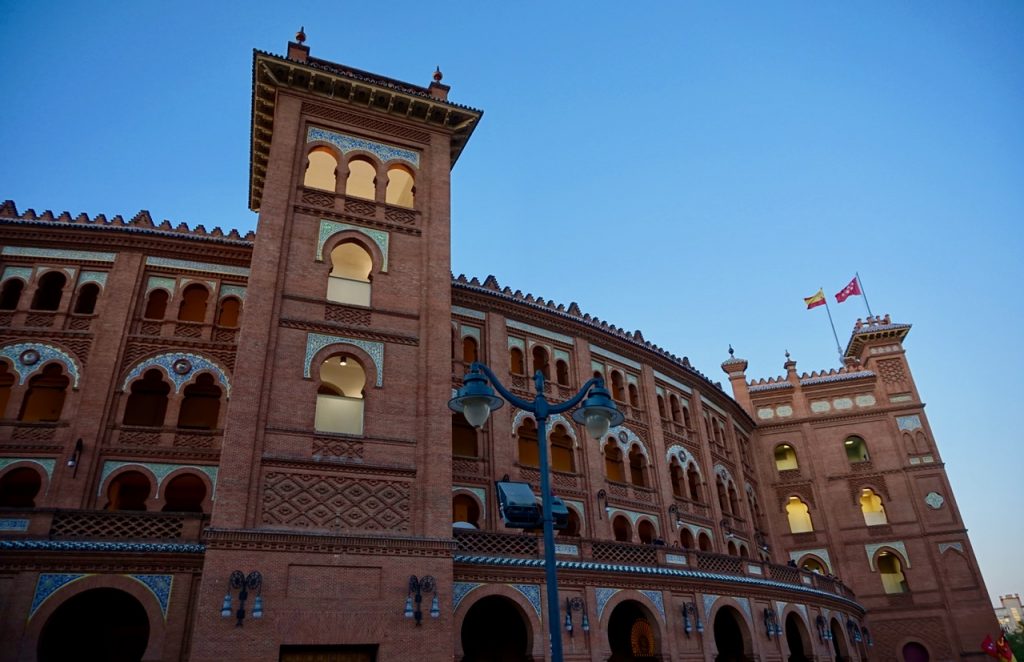 Las Ventas bull ring in Madrid is the center of the bullfighting universe.

That night on Manolo’s sofa, I got a lot more than I had bargained for.

And I was horrified.

The sickening thump of the bull ramming it’s head into the horses’ ribs. All that blood. The bull falling to its knees, coughing and dying.

I definitely wasn’t a fan that first time. But over the next couple of years, I slowly changed my mind.

Some friends took the time to explain the traditions that exist around bullfighting. I gave up on my youthful dalliance with vegetarianism and embraced animal products once again.

I finally went to a bullfight with a friend in Santander, and then a couple more here in Madrid.

So why would I, a fairly reasonable guy from Arizona, want to spend the afternoon in a bull ring, watching large mammals die?

Why watch men in gold suits and pink knee-socks slaughter a series of bulls when there are so many other things to do in the city?

I’m not even sure I know. But I’m certainly not the only one who enjoys the spectacle.

As an American in Spain, I can’t mention bullfighting (and a few other topics) without someone bringing up Hemingway.

When Spaniards find out about my afición, they think it’s something I enjoy because I read about it in a book.

It makes me feel like kind of a cliché. “Oh look, another guiri who thinks it’s cool to watch these barbaric traditions that most Spaniards don’t even enjoy.” 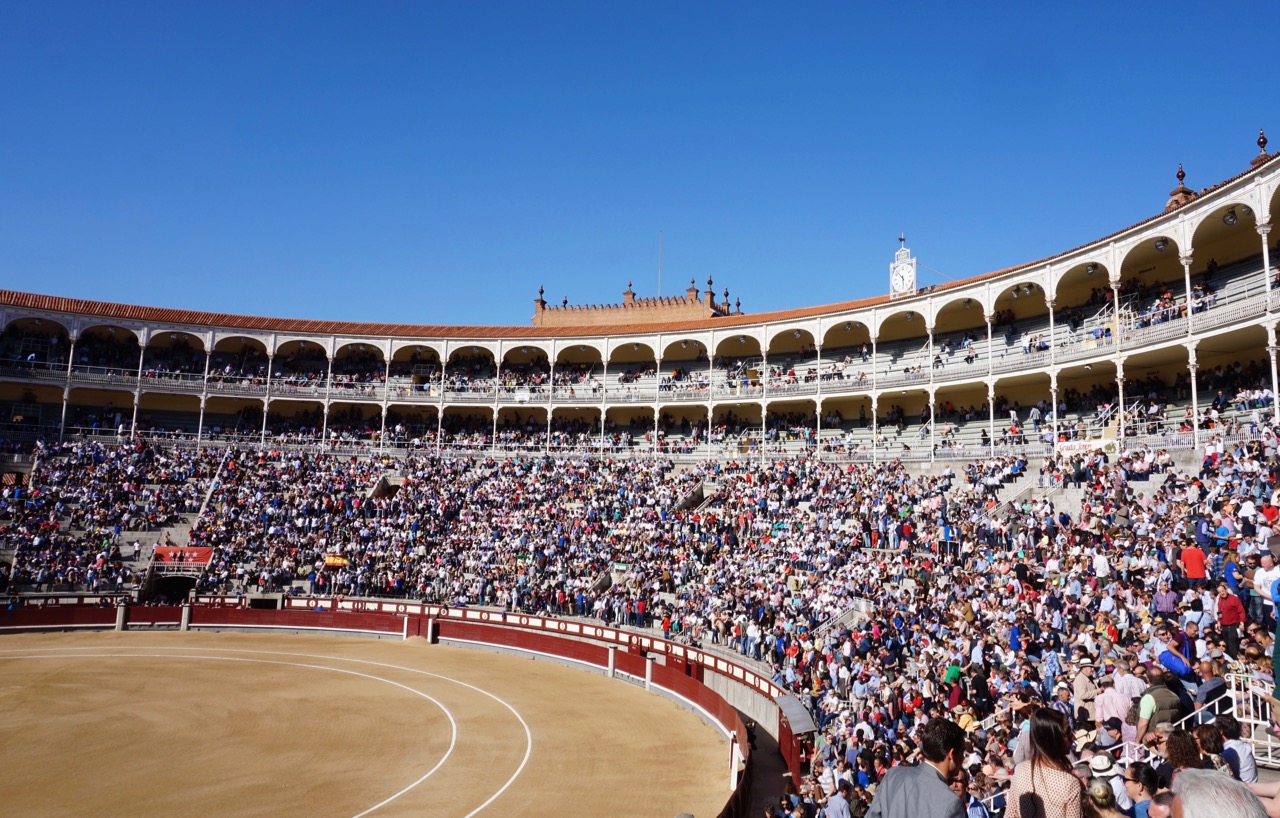 A crowd waits for the bullfight to begin inside Ventas.

What most people don’t know is that Hemingway wasn’t the first English-speaking author to be infatuated with bullfighting.

More than a century before him, Lord Byron went to Cádiz and got a taste of Spanishness — long before the slogan was penned by someone at the Ministry of Tourism, he decided that “Spain is different”.

While Englishmen take a walk in the park or drink tea with grandma on Sunday afternoons, the Spanish celebrate a bloody festival of man vs nature, where life is on the line and honor and bravery are king.

Byron wrote a poem about it, which for a time made Spain a fashionable destination for English aristocrats on their grand tour of Europe – long before the days of mass tourism and holidays in the Canaries or Barcelona.

It was only much later that Hemingway put the city of Pamplona on the map with his book, The Sun Also Rises. The novel explores the concepts of masculinity and honor during the week of San Fermín, the now famous “running of the bulls”.

(Botín is one of the tourist traps I don’t think is overrated.)

And the bullfighting debate rages on

And oh does it rage on…

In fact, Spaniards themselves are divided over the issue of bullfighting and animal cruelty. Catalonia has banned the practice and other regions are considering doing the same.

Meanwhile, bullfighting is becoming more popular in Asia—apparently, millions of people in China watch Spanish corridas on TV each year, and in 2004 a bullfight was organized in Shanghai.

I honestly couldn’t tell you. I still don’t like the blood, particularly. I refuse to clap when the bull falls down. And I can see the point that the animal-rights activists are making when they say it’s cruel.

On the other hand, I appreciate the battle of man vs nature. I like the bravery. The aesthetics of it. And the feeling of being involved in something that predates any of our American traditions by thousands of years.

You can say what you want about animal cruelty (with a hamburger in your hands, perhaps) but it’s true that toros de lidia have much better lives than factory farmed animals.

They spend years walking around in the sun and then fifteen minutes being killed in the ring.

And the fact is that the bull in the ring has the chance to fight back. A slaughterhouse offers animals no such dignity.

I’ve seen bullfighters nearly killed in the ring, and for me that’s the most impressive thing about it. They are willing, literally, to die for their art.

You can’t say that about many other professions.

Love it or hate it, bullfighting is still here and probably will be for at least few more decades.

If you’re interested, Las Ventas has a bullfight every Sunday (and selected other days) from early March till the end of October.

There’s also a running of the bulls just outside of town, in San Sebastián de los Reyes. Every August this suburb of Madrid organizes a series of encierros which you can watch (or participate in) if you’re willing to wake up early.

They’re locally known as Pamplona chica and are supposedly second only to the world-famous Sanfermines for bullrunning action.

What do you think about bullfighting? Leave us a comment below!

P.S. You don’t have to love bullfighting to be “more Spanish”. But you should learn the language. Here’s a place where you can do it: Spaneasy in Puerta del Sol.