Madrid in Love: Readers respond to “Dating a Spanish Girl”

I love the internet.

The other day I published my instant classic Dating a Spanish Girl: 7 things you should know.

And while I was expecting (and got) some negativity, I was also surprised at the number of positive comments it received.

In case y’all can’t tell, a lot of what I write is intended to get a reaction.

And the trolls, of course, play right into my game.

If I wanted to bore people – and myself – well, I could just make lists of my favorite tapas bars.

Here we’ll see some of the best comments from the Facebook thread, plus my responses.

Part 1: In which it is finally revealed why “she” dumped me…

To answer one of your questions, maybe she dumped you because she got tired of you stereotyping her culture. – Fran

She? You mean they!

Well, I guess anything is possible.

I’m sure every girl who’s dumped me has done so for very good reasons. One of my pet theories is that they were somewhat disappointed when I turn out not to be a jealous weirdo.

Because apparently being very passionately jealous is sexy to (some) Spanish girls. And if you don’t call them at 3 AM to ask what they’re doing, they think you just don’t care.

I have some other theories, too. But let’s keep those on the DL.

Are the stereotypes true?

Hahaha! My Spanish​ Novio and I loved reading this article (and the one about Spanish men by your friend). It’s funny cause he even said – this article is so true! – Stacey

Turns out some Spanish people have a sense of humor and are interested in knowing what people of other countries think about them.

Not all, but some.

“All” would be a generalization. And I don’t generalize. (Except when I do.)

The living with parents thing. I was out with some new Spanish friends and talking about how more people live with their parents here than the US. He goes, “Well not everyone here…” “Where do you live?” “With my parents…”  Okay bro…

Yeah, that’s the obvious problem with writing about Spain and Spanish people – I have to generalize, and someone can always come along with “I know at least a half dozen Spaniards who are nothing like what you describe”.

But I know also know a lot who fit the stereotypes, at least in some ways. 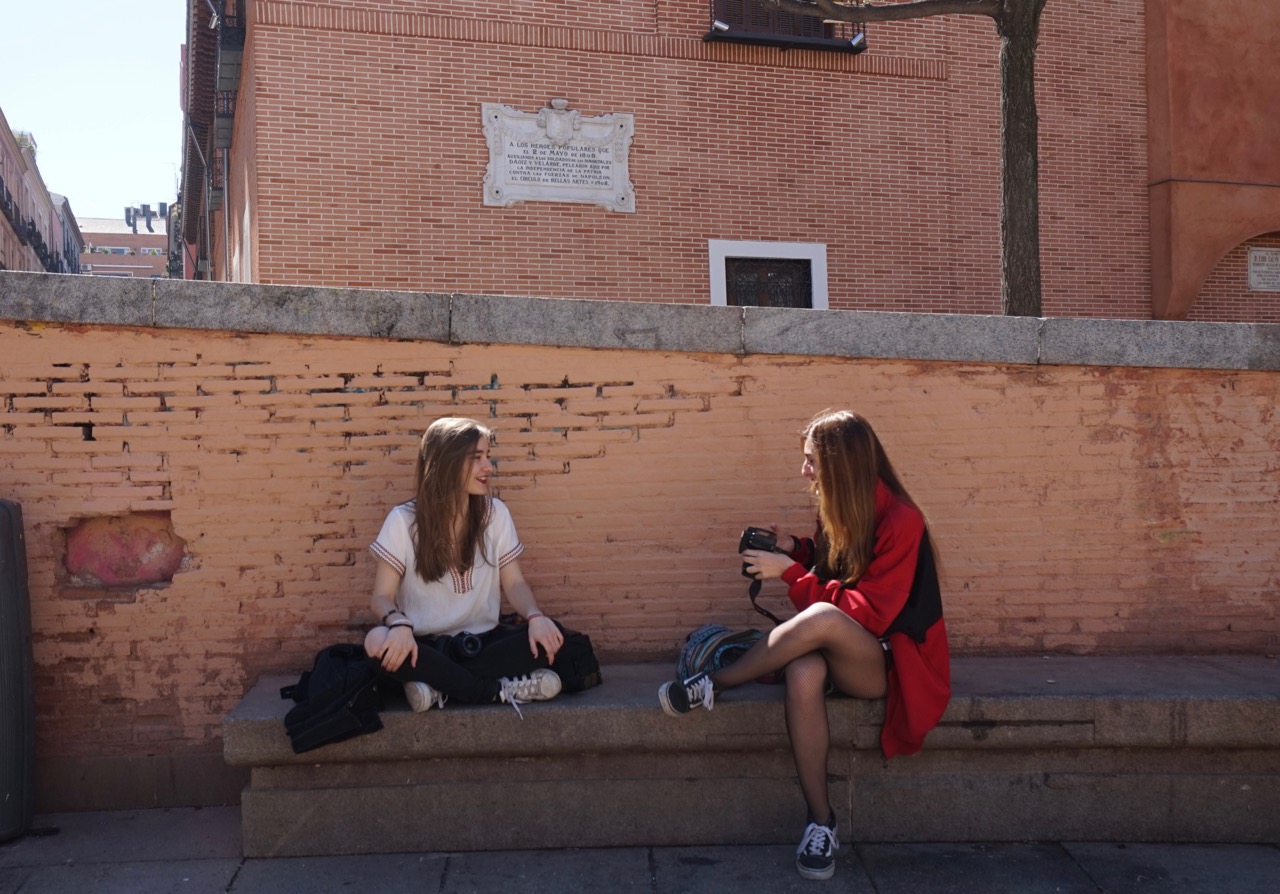 Looking for love at a language exchange

Can you really find love at a language exchange? Some do…

Hilarious post! It works both ways on many of them. The first three months I was with my husband I couldn’t tell if it was it an intercambio.

Yeah, I’m sure it works both ways. My friend Lauren married her intercambio.

He’s cool. (And so is she.) They’ve been happily together for years. But I imagine there was some awkwardness in there when they were working out the intercambio-to-dating transition.

Nina B chimes in again with:

Also I’ve had guys initially want an intercambio and afterwards it seems like they wanna date me. – Nina.

Yup. When I came to Madrid in 2004, that was my strategy too. Well, that and trying to date my students at the language school.

Being in a classroom full of girls who are taking notes about everything you say, laughing at your jokes and (perhaps) undressing you with their eyes is quite an ego-boost for a young guy.

(They were mostly older than me, because I came here pretty when I was 21… but hey! Love knows no limits.)

It could always be worse…

Dude dating a Latina is so much worse. – Diarmuid

And yeah… it could be.

Incidentally, even telling Latin people that we consider “South America” to be a continent has a way of pissing them off.

Because “America” is all one continent.

Spanish girls find us strange, too

This was actually going to be a point in my original article, but I cut it to save space…

Hi Daniel: nice and interesting. But as a Spanish girl married to an English native speaker for many years the opposite would be also very funny. Call it: cultural clash. It is part of life, nothing more. – María Isabel.

And in the interest of fair play, I’m willing to publish the opinion of a Spanish / Latin / European / other girl who’s dated American or British guys.

As long as it’s fun and intelligent, I’m down. Contact me here.

I laughed out loud several times. Was better than I was expecting. I have been warned about the plants before!! – Richard

We ended up talking further, until the point where I actually decided to find out if this one is true. Turns out that plants give might off a small – very small – amount of CO2 at night…

But that having another person sleeping (or doing whatever) in bed with you is much worse. ‘Cause people give off more CO2 than houseplants.

Incidentally, the sweet, delicious churri who told me to get the plant out of my room had no problem with me sleeping over at her place – as long as her parents were out of town.

Yes to the air con and heat myth! I hate it so much! Why must we be sweating in our home?  – Theresa

Yeah, it’s one of those things I still don’t really get.

Coming soon, I have an article about how to beat the heat like a local.

It’s gonna be sweet… but I’ll publish it when it’s actually hot out.

The rest of the comments were mostly positive – some very positive – except, of course, for the humor impaired. And a few people who didn’t like my exaggerations.

So now, let’s be honest: as far as I know, there’s no town called Villafranca de Ojetes.

And no girl has ever dumped me when her ex-boyfriend got back from the grape harvest. At least, not as far as i know.

The rest is all true.

P.D. In another thread, some people expressed the opinion that if we guiris can’t be 100% positive about Spain all the time, we should go home. Because of course, if you move somewhere, you renounce your right to have an opinion. I, however, disagree. I’d love to hear your opinion… how about right here, in the comments section?

P.P.D. If you want even more fun, check out my new article about sex in Spain. Enjoy!