Holy Week in Spain – images of religious processions in Madrid

Coming soon – or recently over, if you read this in a couple of weeks.

Last year, I caught not one but two Holy Week processions here in Madrid. I believe they were “Jesus el Pobre” and “La Macarena”.

Apparently, La Macarena in its original sense has nothing to do with that song from the 90s. Actually, it’s an image of the Virgin Mary.

I took a lot of photos, most of which aren’t great because it was nighttime – and because I’m still totally an amateur behind the camera.

If you want the schedules for processions in Madrid (in 2018) they’re right here.

Holy week in Spain wouldn’t be complete without capirotes.

Apparently, Trevor Noah of the Daily Show was in Sevilla this year, and he explains the story: the KKK’s hoods are just another example of cultural appropriation.

A centuries-old custom given bizarre new meaning in the US.

Oh well. Here are some hats… 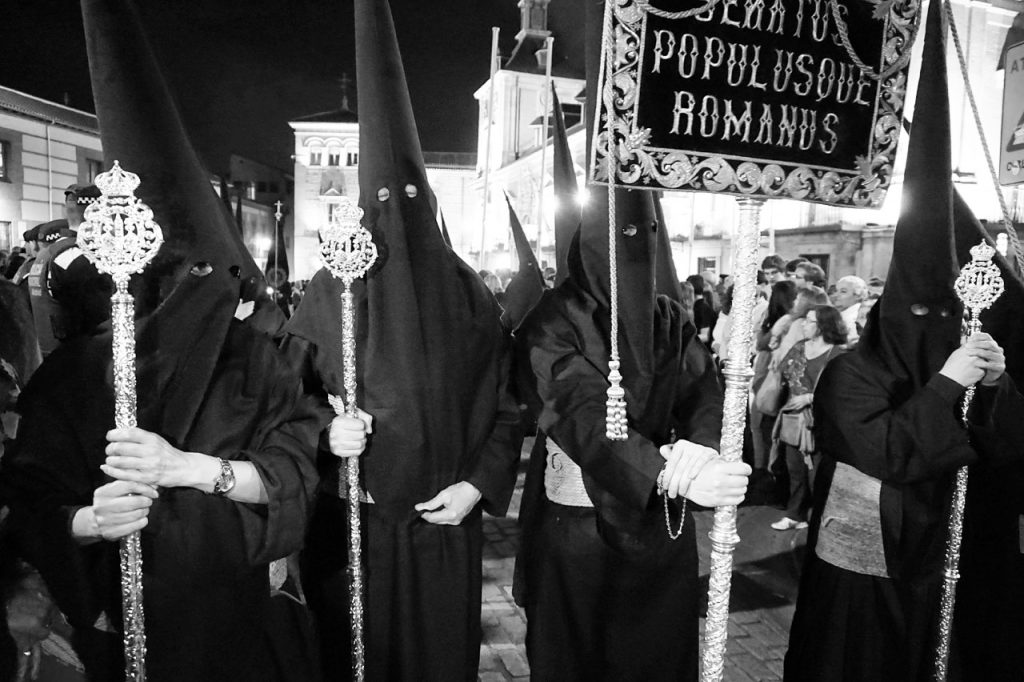 Got some real capirotes fo’ yo’ ass… Also, what does SPQR have to do with this?

These guys – and gals – are a bit creepy at times.

But the whole thing has absolutely nothing to do with racism. It’s just Spanish people being Spanish.

The hoods symbolize penitence. You can also see people doing the whole march barefoot. And in some places, apparently, even flagellating themselves Santa Teresa style as they walk along.

I was amused also to see a couple of kids wearing the capirote, and one guy in a wheelchair. It was pretty inclusive.

The best place to see processions in Madrid

According to people more in the know than myself, the best place to see processions in Madrid is Plaza de la Villa.

A lot of processions go through there, and it isn’t too crowded.

Before discovering this, I found myself jammed into a tiny side street with hundreds of sweaty, agitated Spaniards and a large image of the Virgin Mary. 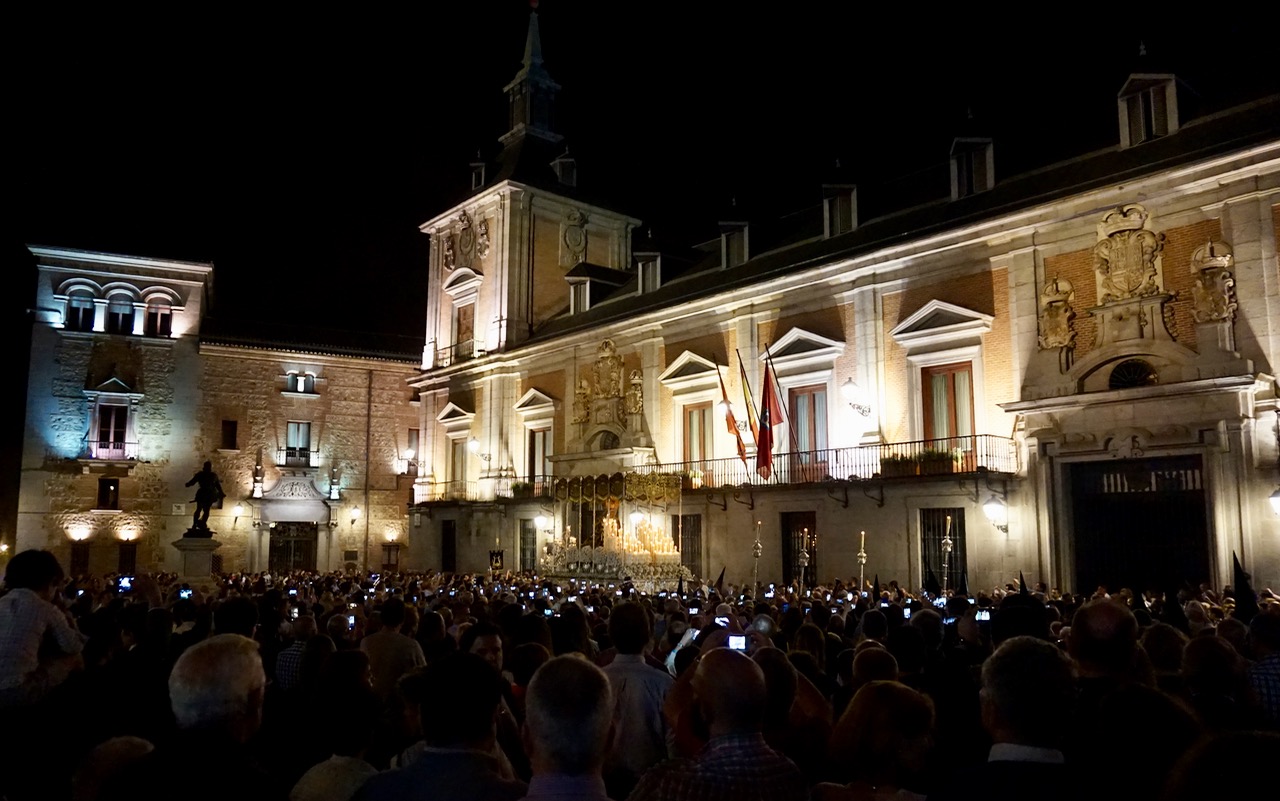 Plaza de la Villa, Madrid, during one of the Holy Week processions.

The image of the virgin is there under the flags. I really like all the mobile phones though. And Plaza de la Villa is one of Madrid’s great old squares.

It’s nice to take a walk around, at any time of day or night.

And finally, the Holy Week widows

I don’t think they’re really called that. But hey. Any excuse to watch a lot of women in black tights. I kinda have a fetish.

The widows can be of all ages, but the ones I saw in Madrid this year were a bit older. 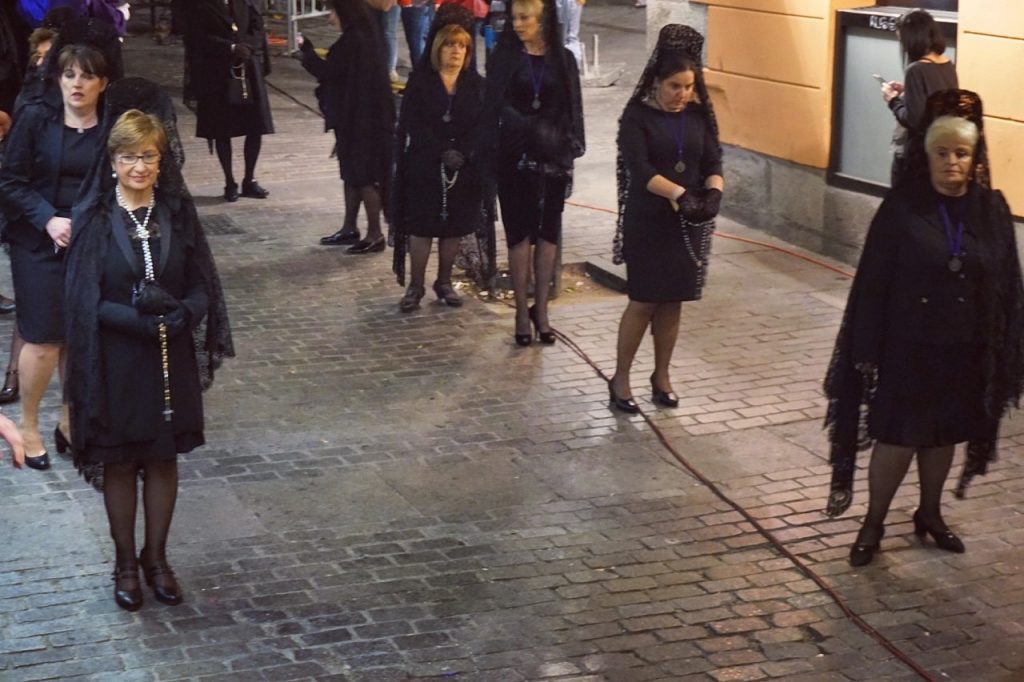 The Holy Week widows, just outside Plaza Mayor in Madrid.

I suppose they symbolize the suffering of the Virgin when Christ was crucified.

And as a sort of history / religion / strange traditions geek, I’ve just found myself googling around to figure out how long Jesus was supposedly in the tomb.

I had always thought it was 3 days, but I took it in a liberal way: on the third day, he was resurrected.

Friday: crucifixion. Saturday: sabbath and rest. Sunday: reincarnation or whatever.

If you count that way, the third day was Sunday.

However, apparently there’s a whole debate about the timing – this article says that apparently, Jesus was crucified on Passover, and that in AD 31, that fell on a Wednesday. Which fits better with the idea of three days and three nights.

Whatever, man. I’m not gonna argue with the theologists – at least not about this.

That girl with the incense almost killed me and my friends. She was just standing there for about half an hour (because sometimes there are long delays while the costaleros take a break) swinging the incense under my face.

And incense is way more toxic than cigarette smoke.

Gotta die of something.

What are your plans for Holy Week?

In the end I had quite a good time – my first real Madrid processions!

And it’s too bad Holy Week is only once a year. I ended the night (after about 6 hours of processions) getting tipsy and eating oxtail and torrijas in El Madroño, one of those famous places I had never before been to.

I guess it pays to have friends whose restaurant knowledge goes beyond Casa Toni.

For the best torrijas in Madrid, check out this article on El País. Once again, I’m no expert. I just like eating. Paleo can wait until after Holy Week is finished.

P.S. If you like Spanish culture, you’ll love my article about dating Spanish girls. As usual, there are people who completely agree, and people who think I’m a jerk. Oh well. Whatcha gonna do?

P.P.S. For more cultural fun, check out How to be Spanish. It’s a response to that article in the Times that was famous for about week – quite an accomplishment, actually, in the days of overnight virality and quick forgetting.