Bulletproof Coffee in Madrid – at Keyaan’s in Argüelles

It used to be impossible to find Bulletproof Coffee in Madrid.

Ladies and gentlemen, I present Keyaan’s at Calle Blasco de Garay, 10 – between San Bernardo and Argüelles.

Since I try to stay on top of the latest news from Silicon Valley, I’d been hearing about bulletproof coffee for a couple of years.

Of course, I’m still a practicing minimalist, and haven’t yet managed to talk myself into buying a stick blender. (I know, I know, they probably cost like 20 euros.)

So… no stick blender, no bulletproof coffee. 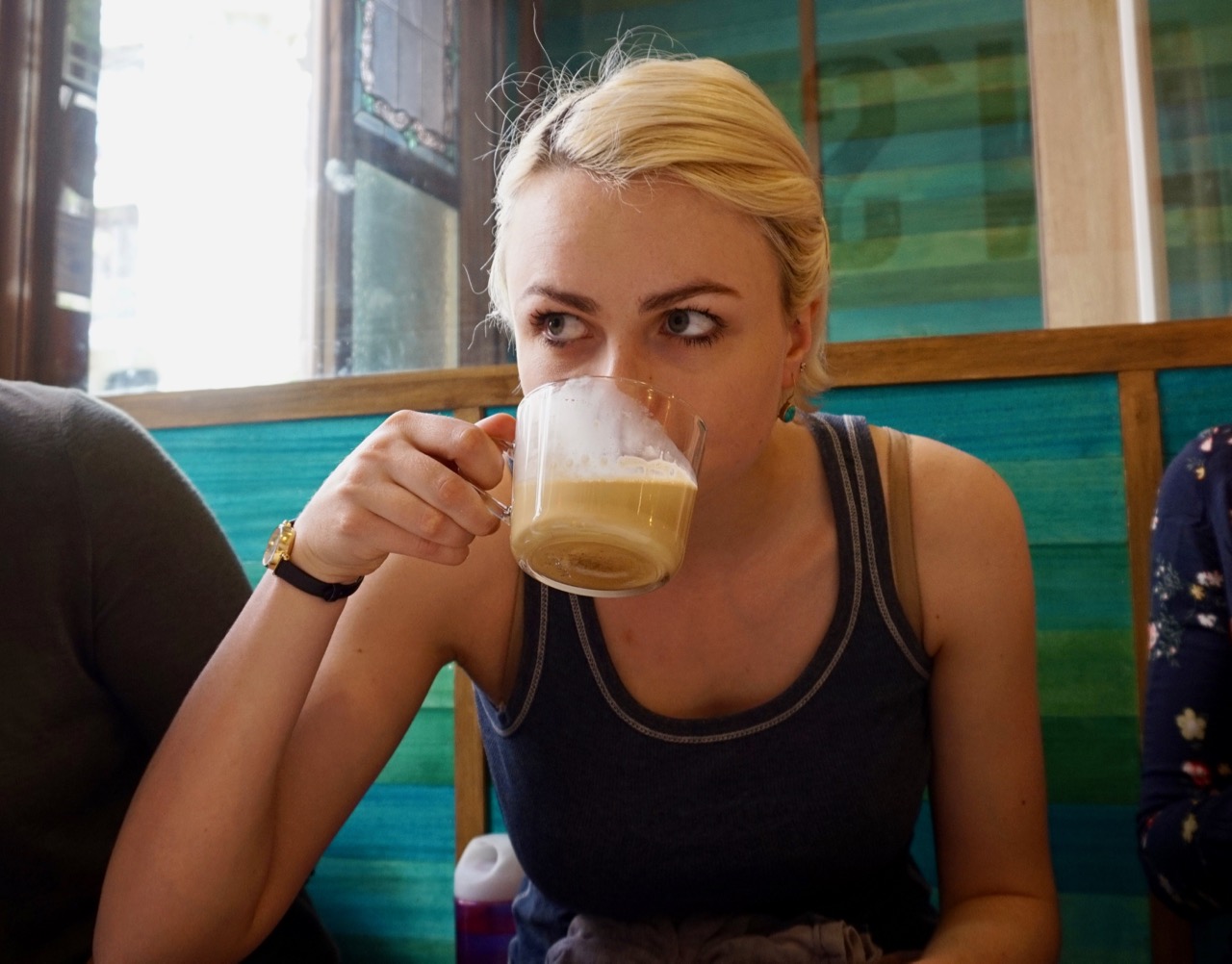 Olivia, a talented young poet from the south of England, tries bulletproof coffee for the first time, at Keyaan’s in Madrid.

All that changed when Natalia from Kusina Madrid invited me to Keyaan’s, a new café that specializes in Dominican empanadas.

The empanadas were great: hot, fresh and made to order.

What I was really interested in, though, was the coffee.

One of the owners (from the UK) says that she and her Dominican husband did a ketogenic diet using bulletproof coffee last summer, and that it worked great.

So yesterday I went back and tried it, and let me tell you – I got quite a buzz off the stuff.

I’ve been doing a paleo diet for years, of course. I even wrote about it in Esquire. I’ve also done quite a bit of intermittent fasting – but always short fasts, none of this 3 to 5 day fasting people talk about.

And recently I’ve been looking into ketogenic diets more heavily. I assume I’m getting a bit of ketosis when I fast for 16 to 24 hours.

Bulletproof coffee seemed like the next step – with butter and coconut oil, it promises to help boost fat burning. Though some artisan-donut-munching tech writers our there in the Valley are a bit skeptical.

Time to get some medium-chain triglycerides up in this

Coconut oil, of course, is the big thing in health in this new age. Or, as my boy JP Sears points out so well over here, the only thing.

Anyway, check out Keyaan’s – as far as I know they’re the only place serving bulletproof coffee in Madrid. Here’s their Facebook page if you want to get in touch. Tell ’em I sent you.

And that’s about all for today.

P.S. Recently, everywhere I go there’s someone who knows me as Mr Chorizo. The owner at Keyaan’s was one of them. It’s pretty hilarious, actually. But I feel like now that people are actually reading this, I should use the platform for good, rather than just self-amusement. Therefore: small business profiles like this one. And L’Artisan, which is also awesome.

P.P.S. Don’t worry, I’ll still be doing the sarcasm and nonsense you’ve come to expect. Next up: 7 things you should know before dating a Spanish girl. Keep your eyes peeled for that one… it’s gonna be epic!