It’s soon going to be Holy Week in Madrid…

Semana Santa in all its Spanish glory.

Are you ready to celebrate?

Today we’re going to talk about the 4 things you should know if you’re going to be celebrating Holy Week in Madrid – and a lot of them will apply to (almost) anywhere else in Spain.

Whatever your religion, you can surely find something to enjoy about the Holy Week celebrations.

Whether it’s the processions, the desserts, or a trip to the beach, there’s something for everyone.

The main attractions in most towns during Holy Week are the religious processions.

Different churches around town have figures of Christ or the Virgin Mary that spend most of the year indoors. But during Holy Week, parishioners take them out for a slow walk around the neighborhood.

When I say slow, I mean really slow. The processions take hours, and you might get bored.

Then again, you might not. I tend to stick around for half an hour or so, to enjoy the music, the ambiance, the cross-dragging and the girls (and women of all ages) dressed as widows. 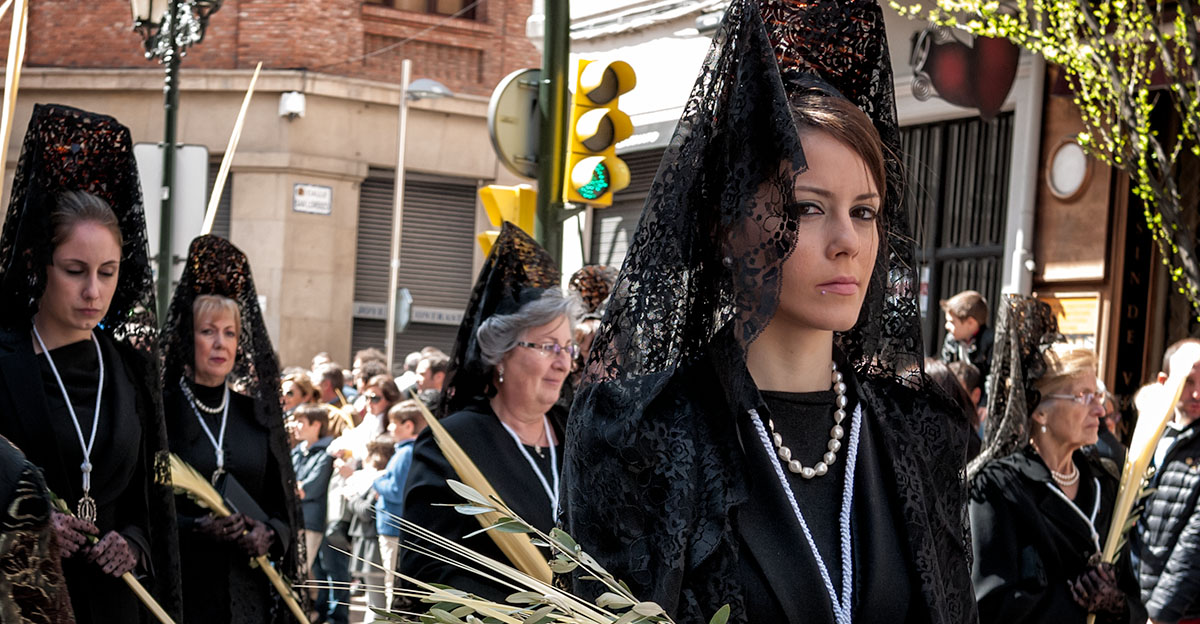 Holy Week in Zaragoza, widows and all. Photo by Gaudencio Garcinuño on Flickr.

This year (2019) Holy Week is in April, and it looks like the weather will be good.

But when Holy Week falls in March, there are often news reports full of people down in Andalucía who are sobbing – heartbroken because they spent all year preparing, and on the day of the big procession, it won’t stop raining!

(Can’t get those virgins wet, of course… that’s the thing with virgins. See my article about Sex in Spain for more – it has absolutely nothing relevant to Holy Week.)

And while we’re on the topic, how ’bout…

Ok, ok… so the pointy hats have some pretty unfortunate connotations in the US.

If you’re new to Holy Week processions, you might feel a bit offended when you see them for the first time.

The capirote is similar to the hats worn by the KKK – my understanding is that someone in the KKK was inspired by a film he saw about Holy Week in Spain, back in the early 20th century. According to Wikipedia, it’s unclear.

In any case, the hats over here have absolutely nothing to do with racism. 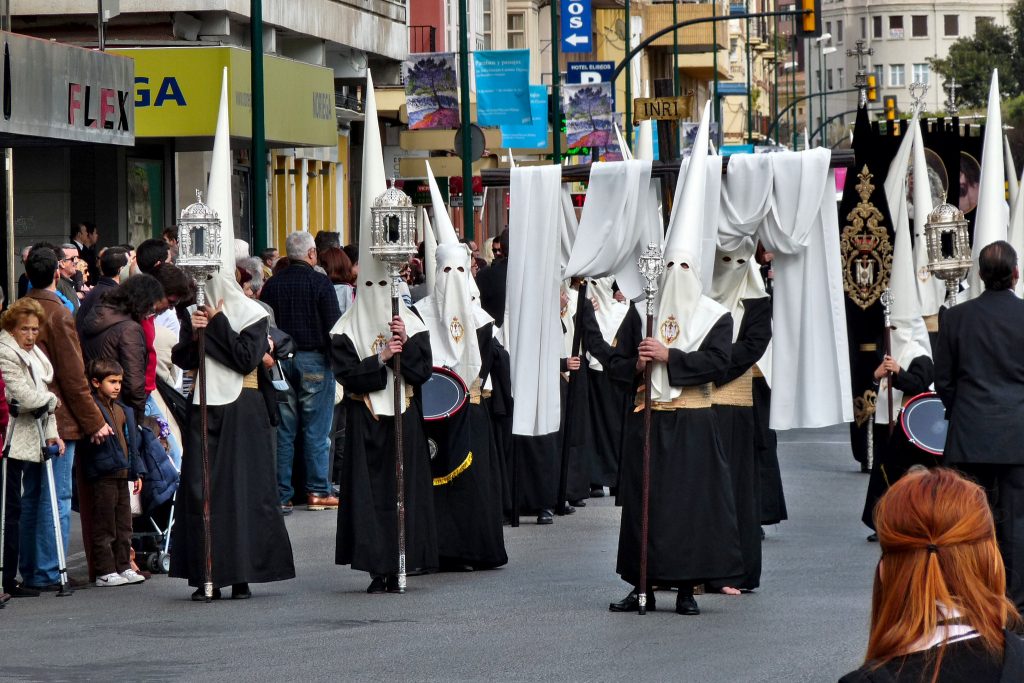 Capirotes during Holy Week in Málaga. Photo by sn6200 on Flickr.

They might make you uncomfortable – I was certainly uncomfortable at first when I saw them – but they’ve been worn since the Middle Ages, and represent shame and penitence: two major themes of Semana Santa.

(See also, the self flagellation in some processions. It’s a thing.)

Anyway, don’t worry about the hats.

Watching a religious procession won’t make you join the Klan.

Torrijas are like French toast – but don’t tell Spanish people that.

It’s special bread, and they’re served with a syrup made from white wine and sugar.

And French or not, they’re typical at this time of year – you’d better find a Spanish partner or grandma quick if you want somebody to make them just for you.

Otherwise, you can find them at a lot of cafés and bakeries around Holy Week. They’re great!

And just another example of Spain’s seasonal pastries. Delicious and unhealthy, just like Jeebus would have wanted.

Holidays at the beach, or in Madrid

Madrid gets a bit quiet during Holy Week.

It’s just like summer… those who can, get out.

Many go to the beach to cool off – or warm up, depending on the weather.

Others go back to their hometown to help carry the virgin around their neighborhood in their processions. It’s a serious thing for a lot of Spaniards – religious or not, they get caught up in the ceremony.

I had a student from a town in Extremadura years ago – she was ridiculously beautiful, fiercely intelligent, not even a practicing Catholic… and she loved dressing up in a black veil and crying her way all the way through the processions in her town.

Oh, that girl… whatever her name was. Laura? Maria?

But she was something special.

Either way, if you are in town, we have our own processions in the center, starting on Wednesday. Here’s the info – it’s in Spanish, but you’ve got maps and timetables: Processions in Madrid, 2019.

If you’re reading this another year, feel free to google around for the info.

En fin… Enjoy your Holy Week in Madrid (or elsewhere)

If you’re not into somber displays of faith, don’t worry.

Holy Week processions aren’t for everybody – but they can be an interesting cultural experience.

And you’ll see them basically anywhere in Spain you choose to spend the week. And if you want to go to the beach, well, have fun.

There’s lots to do, wherever you are.

What’s your favorite part of Holy Week in Madrid – or Spain?

Let me know, right here in the comments.