Wines from Madrid rival those from Ribera del Duero, Rueda and Rioja

I started getting into drinking wine shortly after my first daughter was born.

This kind of confession has never gone over well at job interviews, but sadly enough, it’s true. There is a logical explanation, though. Since going out was no longer an easy thing to do, more and more people would come by to have dinner over at our place, and with it came the bottles of wine and a new hobby.

So it was, as time passed, that I took to trying wines from different regions and soon discovered that there was a whole world of vinos from all over the country, not just Riojas. I also noticed that each appellation, called a denominación de origen (D.O.) in Spanish, specialized in its own kind, and I began to see wines themselves as an extension of Spain’s rich and varied cultural diversity.

Still, some choices seemed a surprise to me at first. The Comunidad de Madrid had its own D.O., aptly called Vinos de Madrid. I learned that many years ago when someone suggested I try one.

“Of wine from Madrid.”

I was trying to keep an open mind, but it seemed almost an oxymoron, and I didn’t really know what to think.

Who would make wines here? What’s more, why? And where were these vineyards anyway?  Behind the IKEAs and the Carrefours?

Amid the paddle-tennis courts in the urbanizaciones?  It all made me feel somewhat skeptical.

I wasn’t the only one. You see, for a large city which prides itself as being open to people from all over the world, up until about ten years ago, Madrid was fairly closed-minded when it came to wine.

And it still is in many ways, but it’s improving. 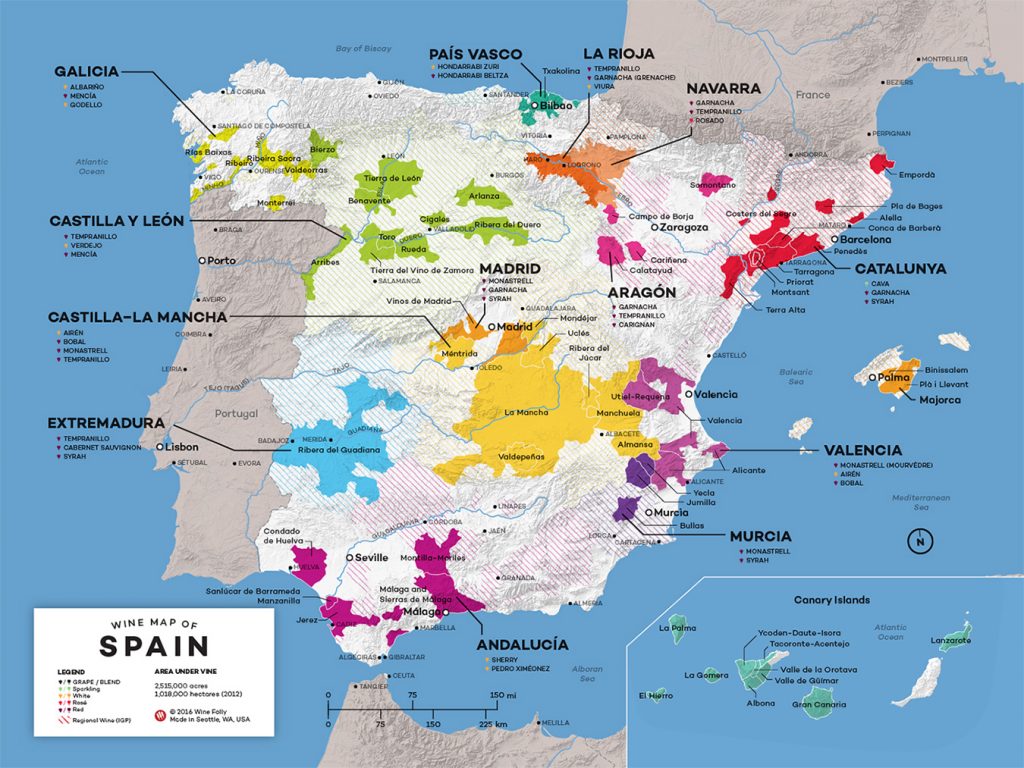 Despite there being scores of regions from around the country with an immense range of great wines to offer, a disproportionately large percentage of what you find in the capital is either Rioja or Ribera del Duero in the red department, or Rueda for whites.  They currently make up the Holy Trinity of wine in this city.

This is not to say that you can’t find vinos from the other D.O.s.  Toros, Albariños, La Mancha, Somontano are among the big names that are readily available, but their sales and presence pale in comparison.  In fact, many bodegas from those regions focus their efforts on the foreign market in part because it isn’t worth trying to crack Madrid’s.

But what happens if you happen to be a winemaker from Madrid?

Wouldn’t it make sense that the people who live there would want to take pride in the local produce? And, with 5 million potential clients in your range, wouldn’t success seem assured?

The evolution of winemaking in Madrid

Winemaking in Madrid is an old custom, and winemakers have been traditional suppliers to the city’s inhabitants for centuries, especially since Philip II made it the permanent capital in 1561.

But back then people drank just about anything that could be fermented, so that wasn’t saying much.

Plus, wine was more of a staple rather than a sensorial pleasure, and no real emphasis was put on quality because no one seemed to care that much.

There are three minor regions that make wines from Madrid – 3 small areas that make up D.O. Vinos de Madrid known as subzonas. These are Arganda, Navalcarnero and San Martín.  99.9% of Madrileños don’t even know that, but what the heck, it never hurts to be informed.

The heart and soul of these wines are red, made mostly from Tempranillo or Garnacha, but you can find some decent white wines from Madrid too. 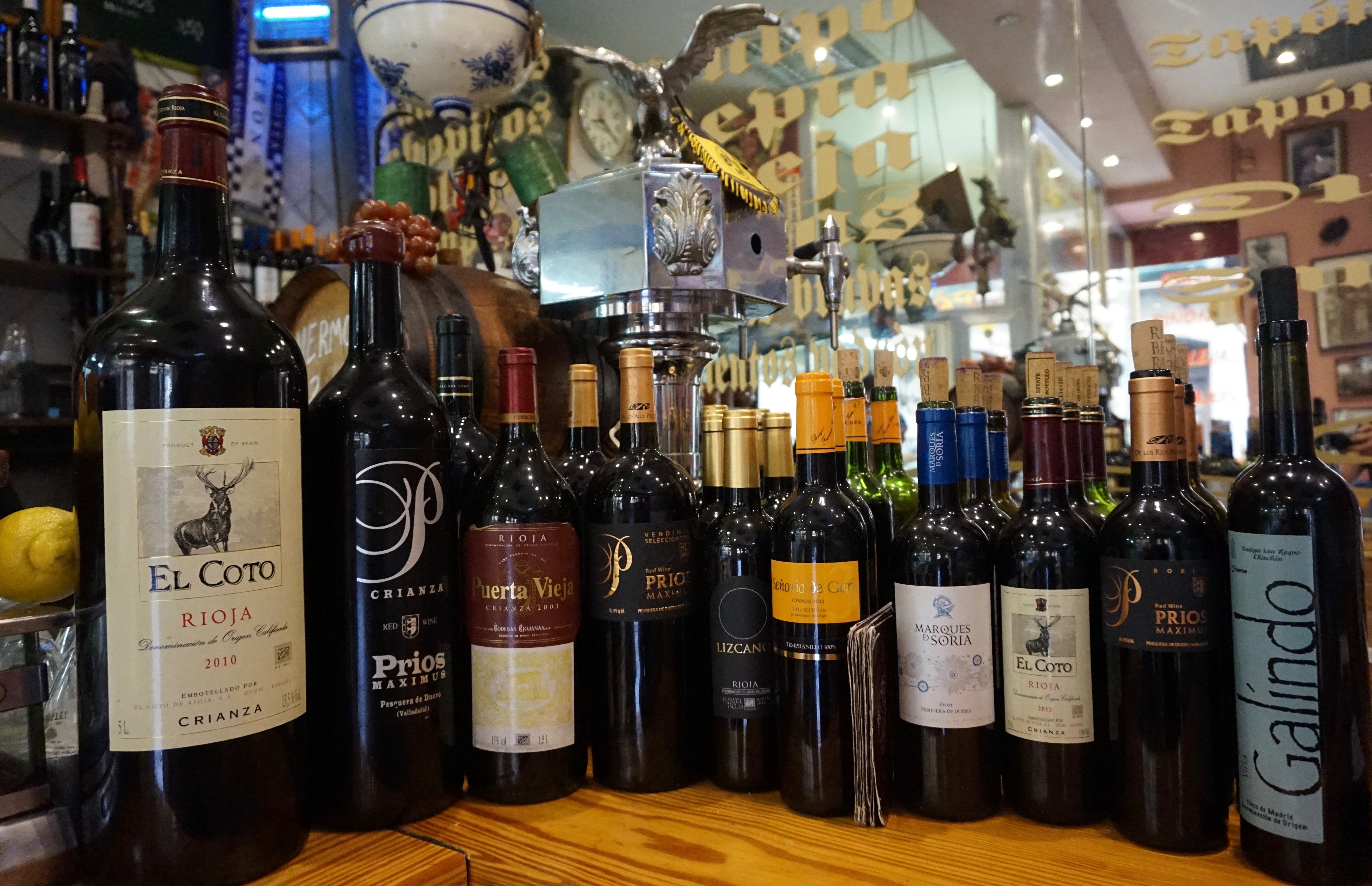 Casa Toni on Calle Cruz serves a couple of wines from Madrid, alongside the typical Riojas.

By the end of the 20th Century, though, many wines in Spain were taking a hit for being cheap, characterless and poorly crafted. That opinion was a result of two factors: changing wine-consumption habits and a stronger economy. In short, people drank less, but were willing to pay more for better quality.

To meet the newly-acquired tastes, D.O.s had to either get their act together or devote their land to something else. D.O. Vinos de Madrid was no exception.

For decades the bodegas produced everyday ordinary wine for the menús del día, but they soon had to respond to more demanding customers, and they seem to have managed to do so with impressive results.

Choosing between wines from Madrid

The good thing about wines from Madrid is that there really is something for everyone.  For those on a budget, which includes many of us these days, there are plenty of caldos which range from 1€ – 6€.  For the most part these are simple wines, but they are more than respectable.

I would recommend many of the wines by Vinos Jeromín because they are inexpensive, generally reliable, and available just about everywhere.  This winery’s biggest labels include Puerta de Alcalá, Puerta del Sol, Puerta Cerrada, and others.  They come in white, rosé and red form.  I particularly like the reds from Puerta de Alcalá.

Other easy-to-spot and solid choices in this category include Jesús Díaz and Viña Rey 70 Barricas, Laguna’s Valdeguerra, or Ricardo Benito’s tasty Tapón de Oro.  For organic wine lovers, keep an eye out for Viña Bosquera red, though it isn’t an easy one to find.

Moving on to the middle ground of wines from Madrid (6-12€), one that’s easy to come by is Grego, also by Jeromín.  There are several versions.  Other excellent picks include Retamas de Regajal by Bodegas Regajal, or Qubél Revelación by Gonsalbez-Orti.  This same winery also has a solid organic line (both red and white) called Mayrit, which is the original Arabic name for Madrid.

Like most regions in Spain, Madrid has moved up into the mid-to-high price range (12-20€) in a fairly short period of time.  The reasons are too complex to get into at this time, but if you are up for something a little more special, I would try Tagonius Crianza, Regajal Especial, Qubél, a Garnacha called Navaherreros or El Rincón by Bodegas Pagos de Familia.

Whites are less common, but almost every winery has something to offer.  They are mostly made from Malvar and Albillo and are often cost-friendly and simple but pleasant, though Bodegas Bernabeleva produces some fascinating wood-fermented whites called Cantocuerdas and Navaherreros, which are in the 15-20€ range.

Then there is still a higher level all together, but that is probably taking most of our budgets beyond what is reasonable.  Many of the aforementioned wineries have their elite showcase bottles in that price range.  Ricardo Benito’s Divo, for example, weighs in at something like 120€.

There is no doubt that they have been produced with a great deal of care, but once we hit the 20€+ mark, the price-quality ratio can begin to really hit some shaky territory, and the “are-they-worth-it” debate becomes a heated issue.

Instead, let’s praise Madrid’s wines without losing our heads or our savings.  That’s because Madrid makes wine.  It makes some very good wine at that.

I have named just a few wines from Madrid but there are many more.

Don’t be afraid to explore and discover some of the great products being produced just outside of this city.  You don’t have to father a child to do so; just walk into your local supermarket or wine shop and you’ll see.

More from Brian at brianmurdock.net.

Brian Murdock has lived in Madrid since 1991. He's written two books about Spain and Spanish wine.