A day in the life of a Digital Nomad – London Edition

I’m a digital nomad – at least a part-time one.

And this is a literal day in my life.

Yesterday, to be specific.

Suddenly I’m awake on the sofa-bed at Jane’s house.

Waking up at random hours of the night doesn’t happen to me much anymore… but it does tend to happen when I actually have to get up early.

And today is one of those days.

It’s my last day here. And Jane’s promised to wake me before leaving for work. In any case, I’m awake 2 hours before her.

After some useless rolling around trying to get back to sleep, I decide to flip on the light. I make some Nescafé and finish editing the video from yesterday.

I’ve got enough instant coffee in me that I’m starting to feel optimistic about the day. Also, I find that I’m reading 4 different articles on 4 different tabs, and just skipping back and forth.

Gotta stop that. In a world of multitaskers, single tasking is the new superpower.

And it’s a superpower I’m struggling to develop.

Jane’s up and in the shower.

On the computer, Ramit says I should raise my prices. Mark says it’s inevitable that one’s capacities diminish with age, but suggests living with an edge anyway.

Time to pack my suitcase.

I’m out the door, headed for the Tube.

On the way out, I meet some sort of typical English woman. Half witch, half deer in the headlights.

She says something incomprehensible – not the first time I find myself unable to understand my own language in London.

On the second try, I understand that she’s saying something along the lines of “You want me to get the door?”

I say yes, and head off.

Soon I’m on the Tube, changing at Victoria Station.

Off at Green Park and out into the hustle of London on Piccadilly. Such an active city. So diverse and so modern and so awesome.

I love Madrid, but London makes Madrid look like some backwater in the middle of nowhere. 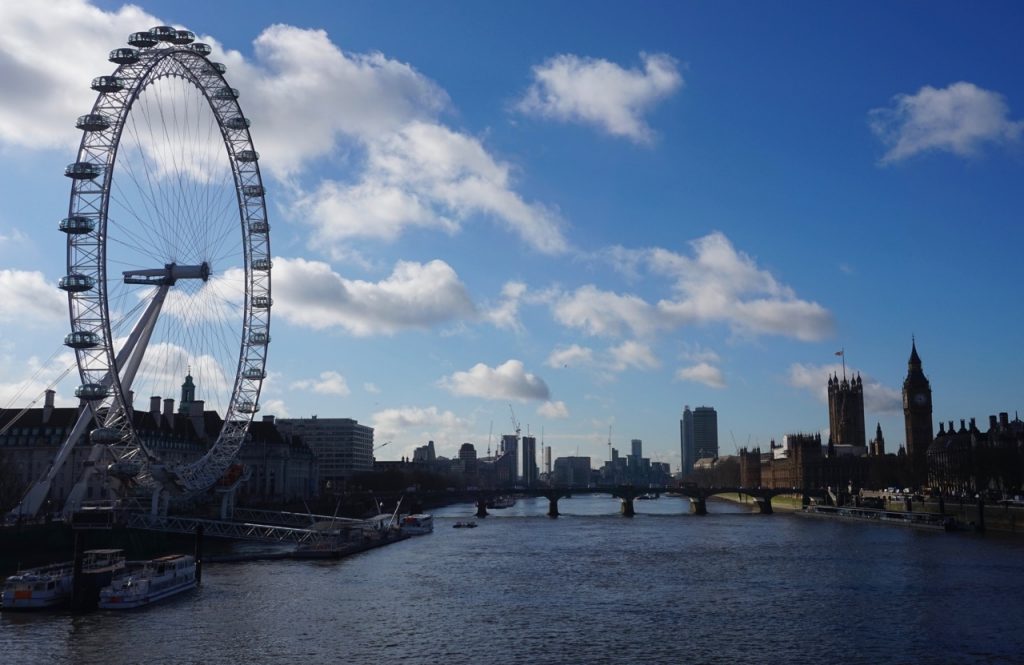 The London Eye, Westminster and Big Ben, as seen from one of the bridges over the Thames.

I’ve left my suitcase at Jane’s office. Time for some real coffee.

I find a place north of Picadilly Circus where the baristas all call me “buddy”.

Now that I’ve got some real caffeine in me, I’m feeling a bit anxious to get back to Madrid and back to work.

But why waste my last morning in London sitting in front of the computer?

I might never be back here. At least that’s what I usually try to think when I visit places.

If I die tomorrow, I won’t regret having so many unanswered emails.

I throw my hard-working side a bone and spend half an hour planning and setting objectives for the new month of March. It’s going to be an interesting year.

I wander towards the north till I hit Oxford Street. London is huge and this shopping street seems at least five times longer than anything we have in Madrid. Not to mention the side streets where there are more expensive brands, pubs, cafés, restaurants from every country in the world.

Selfridge’s department store is apparently modelled after the Parthenon. Harrods has an Egyptian Room and an Egyptian staircase, not to mention probably a dozen restaurants and a number of bars and cafés. Truffle bar. Prosecco bar. Oyster bar.

It’s too bad I’m only vaguely interested in shopping – and that only a few days a year.

I enjoy the ambiance in any case.

Eventually I’m walking past the US Embassy, the statues of Reagan and Roosevelt, and through the fantastically nice neighborhood surrounding.

I briefly think: if I could afford to live in one of these houses, would I?

Probably not. Hopefully I’d come up with something more interesting to do with 4000 pounds a month – or whatever godawful thing.

But you never know.

One last sandwich with Jane before the airport.

2 minutes walk, 2 minutes in line, 15 minutes sitting down in the café. I guess this is great for productivity, but I do enjoy a 2-hour Spanish lunch with wine.

Waiting for the Tube again – this time for Heathrow. London Underground has some pretty funny names for stops. 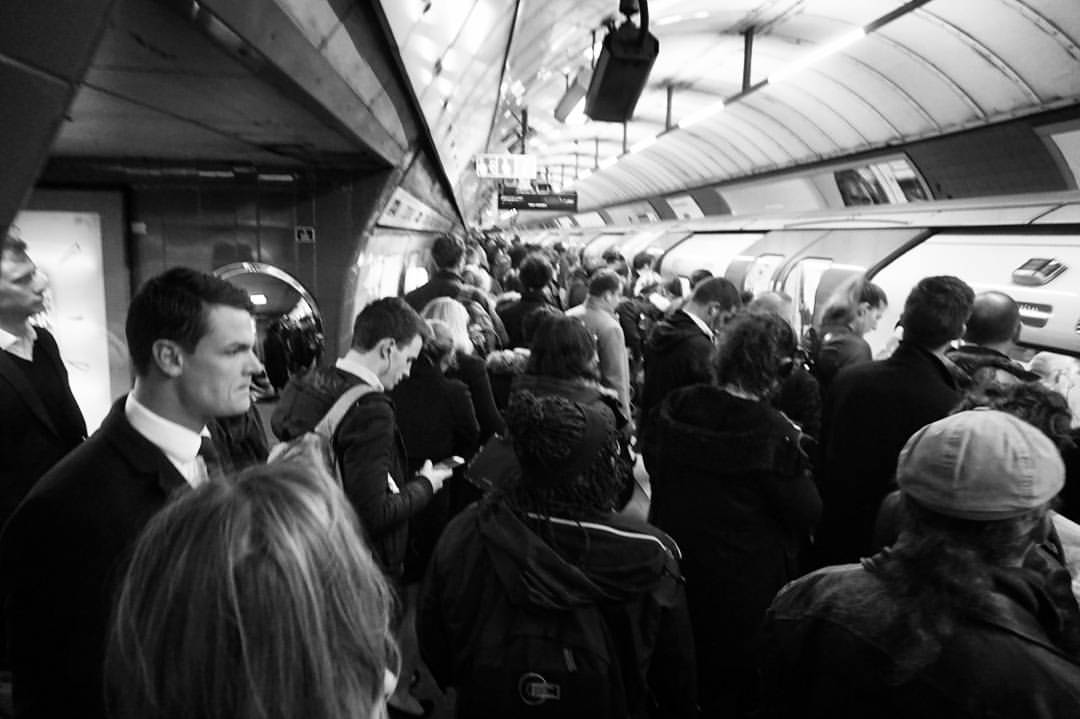 I think this photo’s pretty good. And it was all good luck on my part. Plus, black and white makes it look all dramatic.

My sense of humor hasn’t matured since I was 12, but whatever.

Coffee on the other side. I’m in a daze from waking up so early, and decide to work on formatting a new ebook I’m putting together.

In the middle of formatting, I get a message that my first article is up on Esquire.

The photo I took looks great…

And I get chills down my spine seeing my name on Esquire.

I get a bit teary-eyed contemplating it, then a bit giggly. 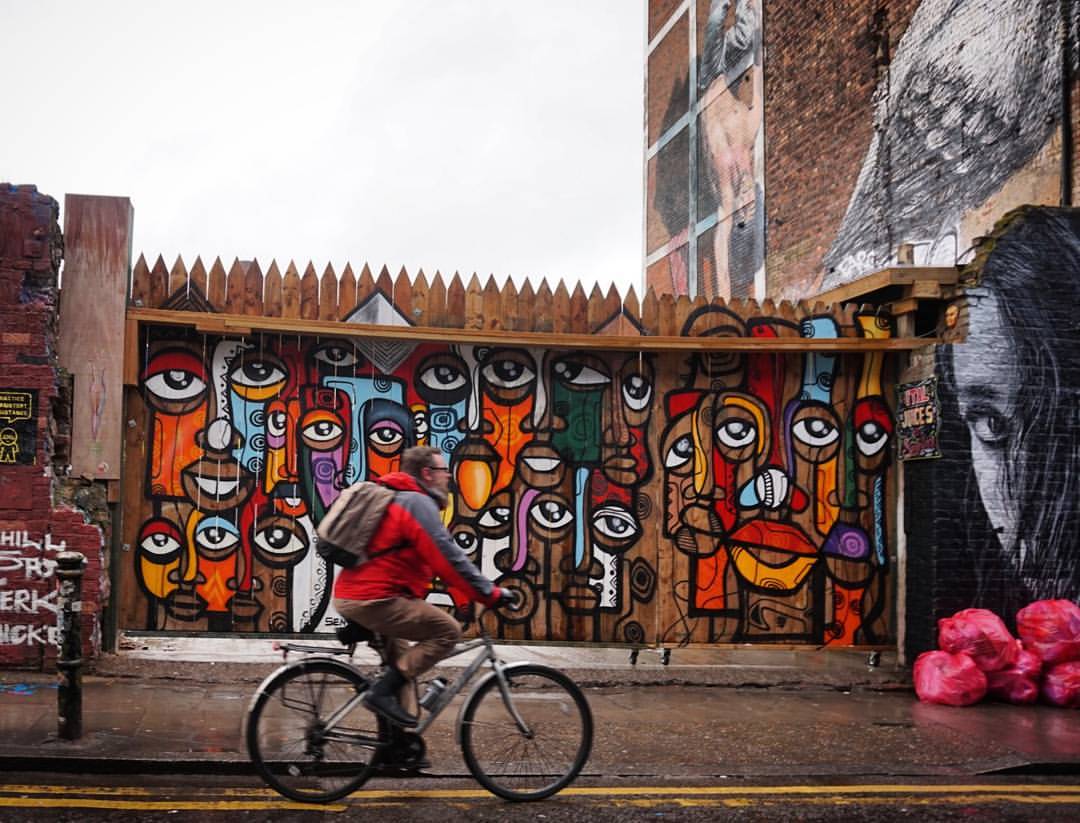 My life now is WAY beyond any “realistic” plan I would have been able to make 5 years ago. I would probably have been somewhat terrified at the thought of so much “success”.

In 5 years a lot can change.

I’ve been sitting around in my state of sleepy euphoria and now I realize I’d better find my gate.

Oops. Turns out it’s further than I thought.

I’ve got 15 minutes to get there. And there are several escalators plus one of those little intra-terminal trains between me and my flight.

My poor little anglosaxon heart is racing. I’m never late for anything.

That’ll teach me to feel euphoria in an airport.

I make it just in time, as the last people are boarding.

On the plane, and it’s delayed. Something about loading luggage into the holds.

The pilot is Spanish, and speaks a kind of informal un-pilotlike English over the PA that’s quite endearing.

“We should be taking off in, like, 5 minutes, so thanks for your patience, really.”

How do people become pilots? I understand it’s quite expensive and involves much study and training.

Those are people with a life plan. People who don’t mind spending 10 years on something that might never pay off.

I read another chapter of Cien años de soledad. Such a great book, and I’m happy to be able to read it in Spanish now.

I decide to do some writing.

But today I’ve done it: blog post in the morning, email to my subscribers, and now this day in the life.

Why a day in the life?

Because sleepy as I am, it’s easier than doing some serious travel writing. A better writer would pull some brilliant essay out of thin air.

Hurtling through the air towards an unknown future in a foreign country.

The pilot comes back on to announce we’re flying over Santander.

In a couple of hours I’ll be home. My sofa. My bed. My wall of books. My windows on Madrid’s skyline.

What am I doing with my life, anyway?

I’m still not sure. So I just try to focus on processes.

Sleep 8 hours when I can.

Did Hemingway have a life plan? Win the Nobel and then blow your brains out?

Note to self: don’t idolize Hemingway.

Went back and edited. Still have no idea where this article – or my life – is going. It seems like there must be a logical conclusion to all this somewhere.

In the meantime, I’m speeding through the air in a metal and glass tube, somewhere over Castile.

The pilot comes back on the PA.

“So hey guys, we’re just getting a bit of turbulence up here…”

Half an hour later I’m on the ground. And soon after, back at my foreign home.

P.S. This actually seems like a fairly interesting day, in hindsight. I just need to keep things in perspective, in order to realize how awesome things are on a more regular basis. Hence, this type of journaling. Because I know I’ll come back and read this in a few years and think – “Wow! My life in 2017… What was that about?”

Digital Nomadry and other awesomeness in Tenerife, Canary Islands