Thinking of making a paella with chorizo this weekend?

At least, that’s what a lot of Spanish people would say.

I personally, your humble host, am a huge fan of chorizo. Just check out the name of this blog.

Is there anything you can’t improve by adding some spicy red sausage?

Quite clearly, there is not.

But the Spanish disagree. Several months ago, Spain was united as never before by the outrage caused by Jamie Oliver’s recipe for chicken and chorizo paella.

It was practically a Gibraltar-scale diplomatic crisis between Spain and the UK.

(And in these times of Catalan Independence struggles, we’ve gotta take what we can get as far as Spanish unity goes.)

Paella with chorizo? How dare you!

Like so many gut reactions based on supposed cultural norms, the Spanish rejection of chorizo in paella is (dare I say it?) complete bullshit.

El Comidista, a newspaper columnist in El País with an almost cult-like following, called BS the week after the scandal broke: paella with chorizo has a long history. Your Spanish grandma probably ate it – and was happy to.

The fact is, like much of Spanish cuisine, paella started out as basic food for poor people. Get a big flat dish, throw in some rice, add whatever else you can find, and cook it slowly over a fire.

With all the poverty and hunger in even recent Spanish history, do you think anybody would turn their noses up at a paella with chorizo?

Your Spanish grandmother would have been happy to make paella out of the neighbor’s dog or cat, if she could catch it.

The post-Civil-War situation was that brutal.

While I agree that Buzzfeed sucks, let’s be real…

Anyone with 4 seconds to spend on Google can find dozens of Spanish chefs and food bloggers who are happy to share their personal recipes for tortilla española con chorizo.

But if a foreigner does it… 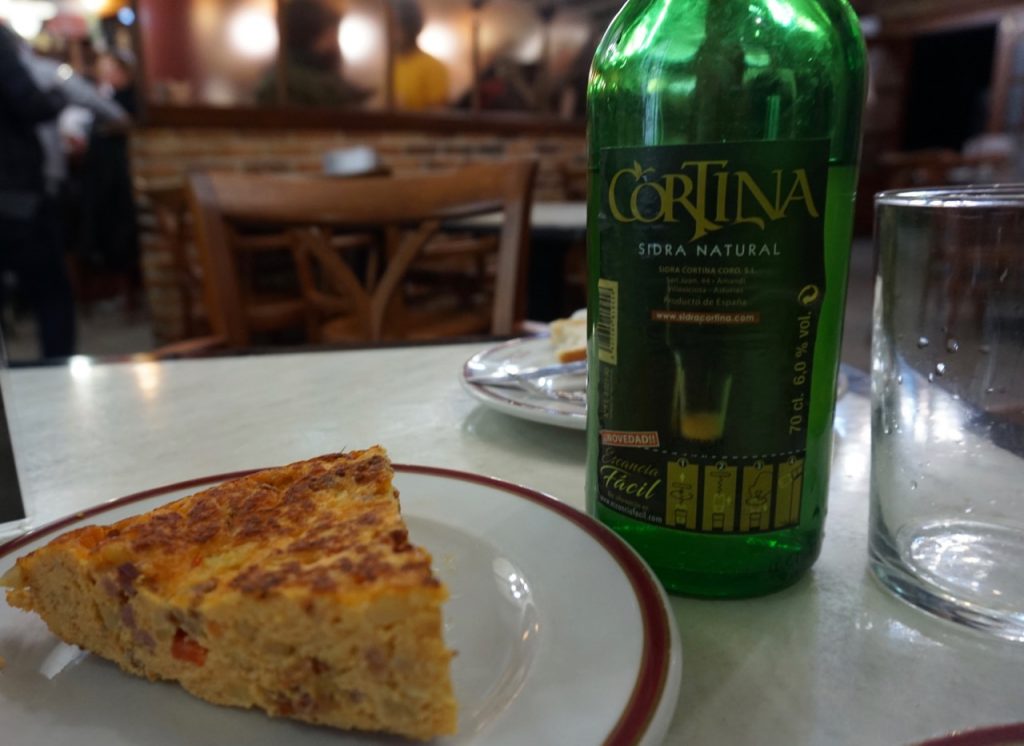 Literally 2 hours after finishing the first draft of this article, I was able to eat tortilla with chorizo at an authentic Asturian restaurant in the center of Madrid. Got a problem with that? Take it up with the chef at La Camocha on calle Fuencarral.

If a foreigner suggests a non-standard recipe, they end up facing a whole online inquisition. Who are you to add one typical Spanish ingredient to another Spanish classic?

But there’s a twist to this story, and you probably won’t see this mentioned anywhere else.

The next time you’re outraged about some Englishman adding chorizo to whatever, think about the trauma you’re causing people from other countries when you ruin popular international foods.

Let me just give you a few examples:

My flatmate, years ago, introduced me to a Spanish-style oven pizza: buy a 3 euro frozen pizza at Mercadona, spread some canned sweet corn on top, then crack an egg over the whole deal. Put it in the oven and enjoy.

Same with what used to pass as a burrito here in Madrid. I remember one I had in Lavapies, which had nothing in common with an actual burrito except the tortilla.

It was filled with shredded carrot, cucumber and cream cheese.

Quite a disappointment, for a guy who grew up on TexMex. (Now we have Tierra Burrito Bar, which is pretty good.)

And another thing… Listen, Spain: the name hamburger might suggest “ham” to the uninitiated, but it’s made of beef.

100% beef. This point admits no negotiation. 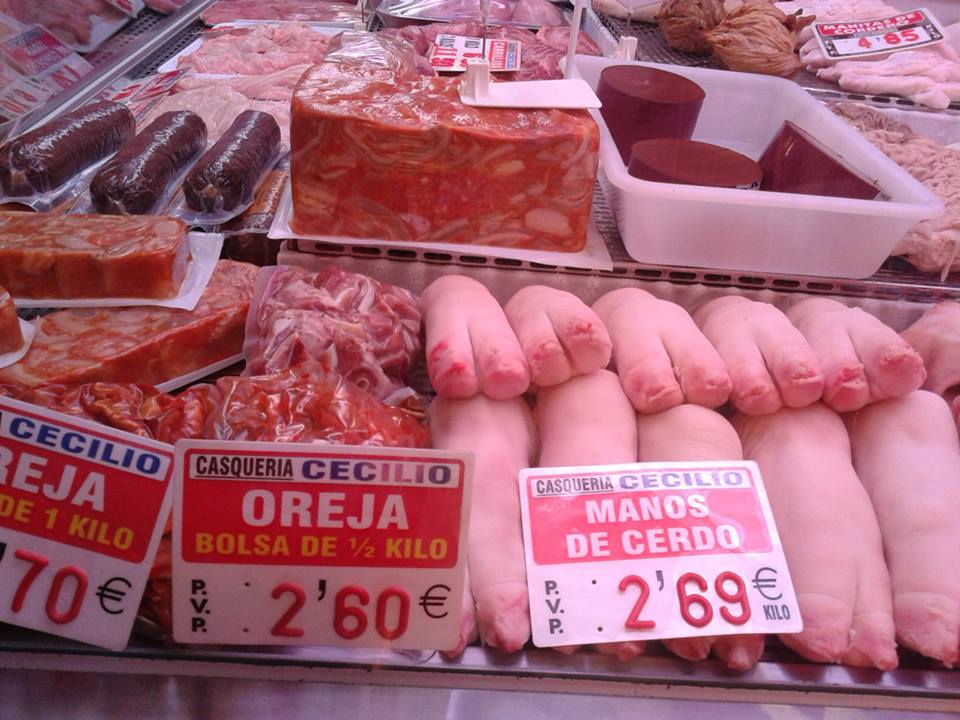 Pig’s blood? Tripe? Ear? Hoof? All legitimate Spanish foods… just don’t get them near a paella.

Every time I try to support a local bar and get a burger for some extra protein, something dies inside me… when it turns out that the burger is mostly pork.

Sorry, Spain. But I gotta tell it like it is.

You suck at international cuisine: so stop whining about foreigners ruining your cherished traditional recipes.

I remember a certain ex-girlfriend who absolutely lost her shit (as only Mediterranean women can do) when I used both onion and garlic in a sauté.

A real sauté, she informed me (veins bulging out on her neck, righteous indignation bubbling in her gut) includes either onion or garlic.

Later on, when we visited her hometown in Italy, her mom made a sauté with onion and garlic one evening. I pointed it out, and my ex (wonderful woman that she is) said…

“What? I never said you couldn’t do that! We literally never had that conversation. You and your imagination…”

Is there a reason for all this nonsense?

I think it’s just that Mediterraneans feel like their food culture is superior to anything we have in the English-speaking world.

So they feel justified in lecturing us barbarians about how to do things.

And by the way…

What’s up with these awful beer and wine cocktails?

Kalimotxo – red wine with coca cola – really isn’t. If you must drink it, make sure it’s bad wine. I’ll personally set up an inquisition and have you flayed alive if you mix a bottle of real Rioja with coke.

Or you could try una clara con limón: beer mixed with lemon Fanta.

Spike your blood sugar at the same time you’re getting tipsy. Have fun with diabetes, dawg.

Either way, it sucks.

Anyway, Madrid feels like it’s the capital of everything.

And as foreigners here, we have to occasionally swallow our pride and deal with the Spanish ruining our food – and at the same time feeling so superior about their own food culture they have to mansplain it to us.

Is there a solution to all this?

It’s just the inevitable result of the mixing of cultures – it’s probably happening all over the world.

Or a burrito in Australia?

These are the questions that keep me up at night. All night, actually, with the severe stomach pain that follows eating a cucumber and shredded carrot burrito.

P.S. I used to date a girl from Valencia. She insisted that paella isn’t really paella unless it has rabbit. I confirmed this when we later went to a restaurant, and the rice had rabbit legs, rabbit ribs – and even rabbit heart, lungs and kidneys. And she was from Valencia: birthplace of Spanish rice. So, take that, ye defenders of regional paella recipes! Enjoy your rabbit kidneys. Or admit that you suck at food (and probably life).

P.P.S. Whatever you think about this article, please leave me a comment. Do you put chorizo in your paella, or cream cheese in your burrito? Don’t worry. This is a safe space. I won’t judge you. As long as you don’t make me eat shitty food, that is.