Is going to a Real Madrid match a waste?

Nick is from Northern California, and these days he’s teaching here in Madrid. On his blog, Blue Green Rock, he talks meditation, dating, drugs, sex and more…

Today’s article is about why you probably wouldn’t enjoy going to a Real Madrid match very much. If you want my opinion about “football”, check out my instant-classic article Is the Spanish government hypnotizing you?

And if you want to write a guest post here on The Chorizo Chronicles, by all means, get in touch.

I love soccer and had been dying to go to a Real Madrid match for months. The tickets finally dropped down to a less than normal rate of extortion, so I bought one and prepared myself for some world-class soccer in a world-renowned stadium.

Unfortunately, what followed was a disappointingly-expensive 90 minutes, which is why I’m here to warn you about the negatives of going to a Real Madrid match.

As already alluded to three times in the first four sentences of this article, the tickets are pricey.

I went to a game against a relatively weak opponent and the tickets were still 90€. To go to a high-quality match, like the upcoming one against Dortmund, the cheapest tickets available are 325€… I know, my wallet just started trembling too. Shh, shh, it’s ok buddy, don’t worry, we won’t be going to another one.

That’s an average of roughly 200€ per ticket. 200 fucking Euros! To put that in terms we can all understand, it costs 5€ to buy 20 chicken nuggets from McDonalds.

For the price of 1 ticket, you could buy 800 chicken nuggets and feed Madrid’s homeless population in a downpour of golden, crunchy goodness.

In conjunction with point number 1, I purchased the cheapest seats available. As a result, I was located at the peak of the behemoth Santiago Bernabeu Stadium. 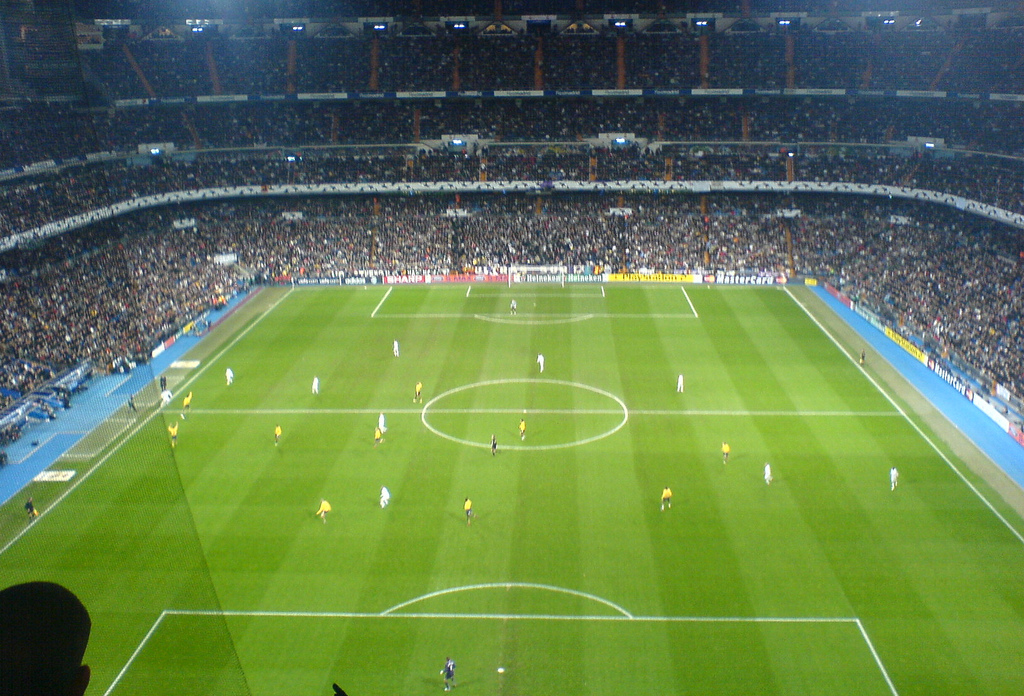 I was so high up that passing satellites were within arm’s reach. I’m pretty sure I saw that RedBull guy preparing to jump and re-enter the Earth’s atmosphere.

Point being, it was difficult to enjoy a match when I wasn’t sure which distant speck to root for.

Reason 3: They don’t sell alcohol in the stadium

Because I enjoy being drunk at sporting events, this meant that I had to do all of my drinking beforehand. This created a problem once the game began, because suddenly it was 35 minutes into the first half and all of my pregame beers had flooded my bladder at precisely the same moment.

I had no choice but to get up and shuffle in front of my neighbors, who became visibly upset that I was blocking their view of the game that they couldn’t see. My steps down the stairs were painfully slow and cautious, as I was slightly dizzy from altitude sickness.

I finally reached the toilet, but my joy from a relieved bladder was swiftly quelled as I both heard and felt explosive cheering, signifying that I missed the only goal of the first half.

I was sad that I missed the goal and needed a beer to numb the pain, but Coke was the only beverage available. I settled for a high-fructose corn syrup induced buzz, and climbed back to my seat beerless and defeated.

You can actually see the action, there’s instant replay for any missed goals, and you only spend 15€ on drinks – which means that you’ll have €5 leftover to splurge on chicken nuggets to celebrate a wonderful game.

A bar that I like for games is La Fontana de Oro on Calle de la Victoria, right next to Sol.

What do you think… Have you been to a Real Madrid match? Was it worth it?