A lot’s been happening recently.

And actually, I find myself lost for words.

What can I say?

It doesn’t need more people shouting “fascist” at anyone who disagrees with them.

And anyway, that’s not my style.

I’ve been angry about politics before. It didn’t help.

But I can’t stay silent. Because what the world does need are people willing to take positive action.

Anger is fine as an initial reaction to what happens. But only to the extent that it inspires you to make a plan, take action, and decide to…

Here in Madrid, I consider myself lucky to have met several refugees from various countries.

The stories they tell will make your hair stand on end.

Other than that, they’re completely normal people, just like you and me. They had lives back home, they love their mothers, they were in the middle of studying or working or falling in love…

When the shit hit the fan in their countries and they had to leave.

And here they are. Fighting with bureaucracy in order to stay in Spain, and trying to make ends meet on terrible Spanish salaries, just like the rest of us.

So here’s the thing…

I have no idea what the solution to some of the world’s larger problems might be. But some friends and I are helping out with Europe’s refugee crisis by helping real people – right here in Madrid.

You can whine about the big things or you can GET YOUR ASS TO WORK on solving some of the small things.

And we’d love you to join us.

Fitness and Boxing in Retiro

People from several countries get together to work out every Saturday morning at 11:30 in Parque Retiro. Our teacher, GB, is a refugee who left Gambia when the dictator declared he’d be in power for a billion years… and started killing off the opposition.

Since then, the dictator was voted out. But the situation isn’t much better.

In any case, GB’s a great guy, and we do some hard exercise.

But the best part?

You’ll probably meet me there!

Only kidding, of course. The best part is the workout, meeting people from all over the world, and supporting a good cause – all the money (it’s only 6€) goes to our teacher. 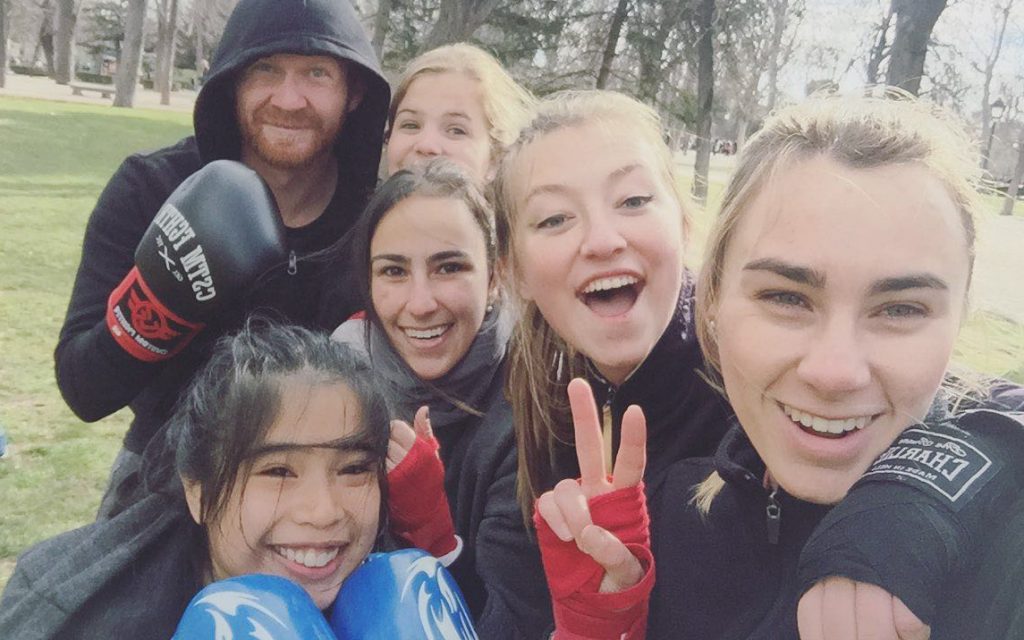 The classes are female friendly, and no previous boxing experience is necessary. All you need is a willingness to sweat and a towel to do abs on.

Get in touch for more details, right here.

Or check out some photos on Jab Cross Boxing’s Facebook page. There’s also a video of GB, me, and several others here.

Or, if you’re not the sweaty type…

Some friends, like Natalia from Kusina, have already organized several Chefugee dinners in houses and restaurants in Madrid, all serving food made by refugee chefs.

I went to the first one, where Khaled served food from his native Syria. It was amazing! 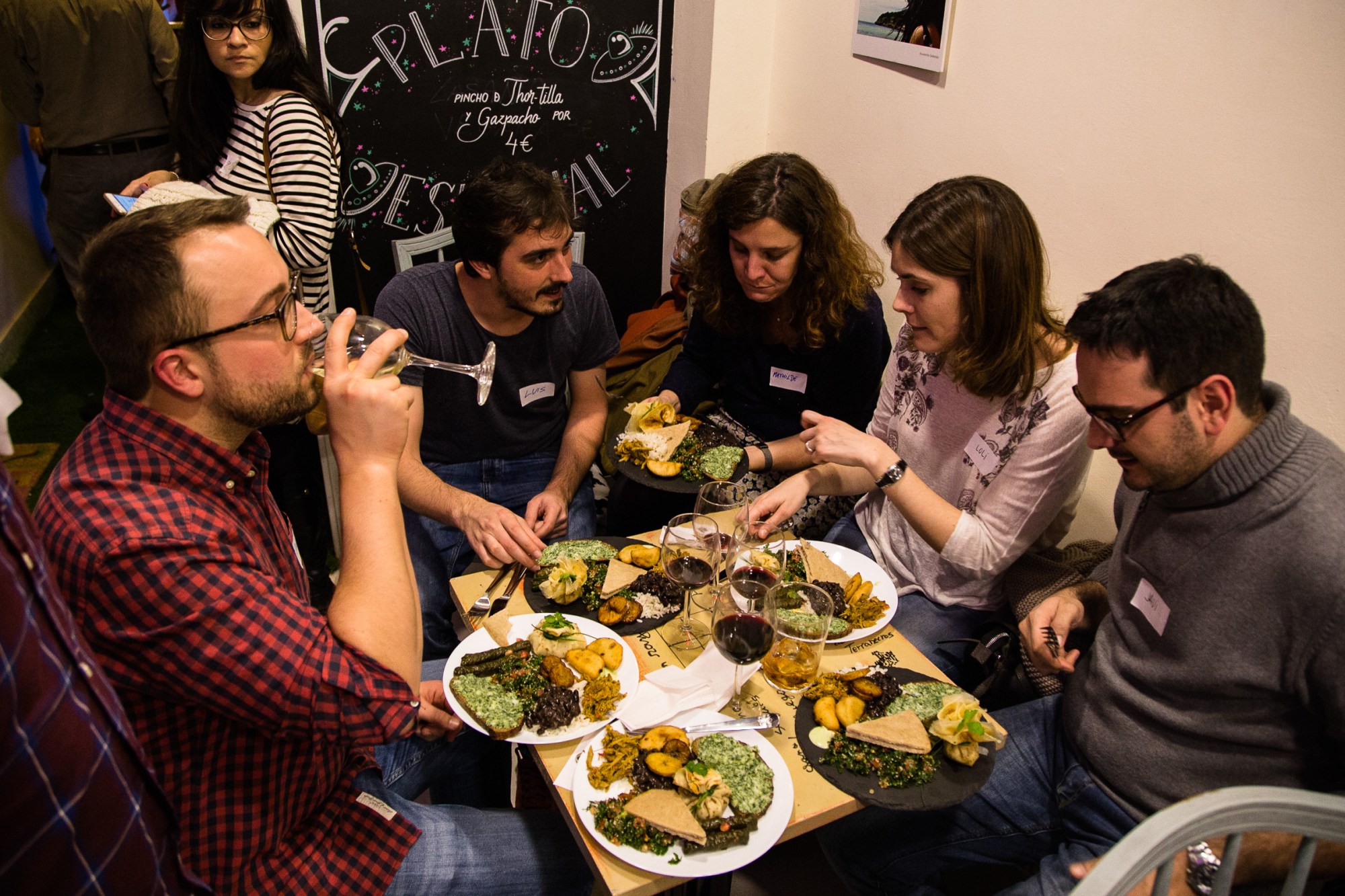 There’s an article in El Mundo about Khaled. Think you’re having a bad day? You probably aren’t. Read it and see.

Other events have highlighted Ukrainian cuisine, or had international refugee chefs.

The money goes to buy food and to pay the chefs – and there’s plenty of wine, vegetarian options, and nice people from around the world hanging out.

Get in touch through the Chefugees website for more details – they’re always looking for volunteers to help organize future dinners.

Or you can just go and eat. They’ll be organizing more events soon.

Donate clothes and more to Madrid for Refugees

Madrid for Refugees, as far as I know, is completely grass-roots. Just people wanting to help out. I know some of them – both in person and online.

I donated a couple big bags of stuff to them last year, and they’re often looking for more: clothes, blankets and furniture for people who are relocating or who have to leave the refugee centers.

Check out MadridforRefugees.org, get in touch, and see what you can do. Or hit up their Facebook page.

They organize events of all kinds: trivia nights, yoga, cooking classes, whatever – with proceeds benefiting the organization.

The point is to do something

In the end, Spain doesn’t have as many refugees as other European countries.

A lot of people are just passing through on their way to Germany or Scandinavia.

But there’s always something you can do in your community, or even in your neighborhood, to help out.

If you live here in the city, there’s somebody within a few blocks of you who’s in a situation you could barely imagine. Just look around. Really. Just look.

(I have a food bank at the end of my block. I almost die every time I walk by and see the people – my neighbors – lining up for groceries.)

Anyway, with a little effort, you can find people in need and help out.

Because as I’ve said elsewhere: the world doesn’t give two shits about your opinion.

What matters is what you do, day in and day out. Even the small things help…

Are you making the world a better place?

Or are you sitting around complaining about how life is unfair?

There is always something you can do…

It might start with being angry. But don’t let it end there.

Mr Chorizo. Or Daniel. Whatever.

P.S. This was really hard to write. And there are 2 million things I didn’t say… just because they’re unhelpful. And this is all about being helpful. So get out there, goddammit. And help!