You’ve read the first part of my article on the Zen of Blogging.

You’ve thought about a topic.

You’ve thought about your audience.

You’ve sat down and made a list of 10 posts you could write.

You even wrote one or two of them. But you felt like you needed more… A kick in the pants from a guy with a ridiculous pseudonym, maybe.

The lazy man’s way to riches. How to earn money on the beach and – occasionally – clean dried up piña colada out of a keyboard.

How to wake up alone and freezing cold in any major world city… all through the power of blogging!

(I’m still working on the tagline.)

Anyway, here’s some more advice. Tony Robbins I am not.

But of course, I’ve been around the block.

A blog is an imperfect thing.

And over time it will keep evolving.

Many people use perfectionism as an excuse to do nothing.

“No, I couldn’t possibly release anything into the world that’s less than perfect”, they say. “I prefer to do nothing at all!”

To them I say: you suck.

Yesterday, in fact, I heard of something called Sturgeon’s Law.

Sturgeon, a science fiction writer, is credited with saying (basically) that 90% of everything is crap. 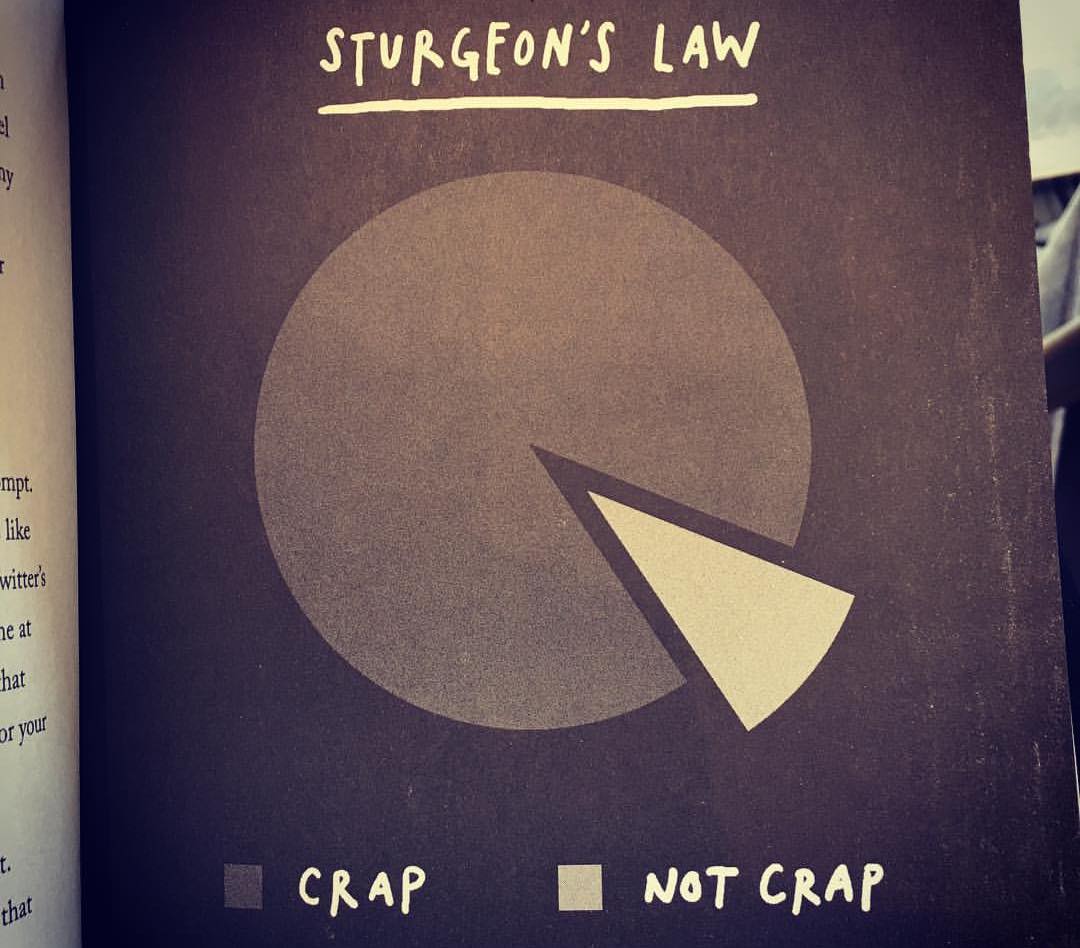 The thing about the creative life is that you have to accept sucking at first. You’re gonna suck, possibly for a long time, before you get good.

But if you let your inner perfectionist keep you from creating anything at all, well then, you just suck.

Kill your inner perfectionist. Or at the very least, immobilize him (her?) with duct tape and a ball gag and lock him / her up in your mental broom closet.

Let the perfectionist out when it’s time to scrub the floor or make a lasagna.

Because writing will always be imperfect.

A good writer is able to get over the fear, and just let something imperfect out into the world.

Which brings us to our next point…

Embrace the process of constant improvement

If you’re publishing a book, and your first print run is 200,000 copies, you’d better make sure you’ve done your editing.

On a blog, well, it’s not quite so important.

You can always go back and rework things later.

These days, in fact, I spend a couple of hours every week going through old posts and making them better.

I guess at the time I wrote them they seemed pretty good. Writing in a foreign language isn’t easy, and I was doing my best.

And here on the Chorizo Chronicles, well, I was used to nobody reading my articles anyway.

Now I have a much larger audience, and when I look at things I wrote 5 years ago, often they’re embarrassing.

The great thing about a blog, though, is that you can go back and edit old posts and pages. You’re not stuck with something you wrote years ago. Make it better!

Hi, I’m Mr Chorizo, and I suck at basically everything. The only difference is, I try harder. Photo by Sabrina Passos.

Here’s the thing: bloggers are expected to be real people, with imperfections. People who read blogs understand they’re dealing with somebody who’s working on their own – not a major corporation with a huge team behind every press release.

People will forgive you for being less than perfect.

And when you’re starting out, you can suck all you want.

Because (sorry to say this) nobody’s going to be reading your stuff anyway.

A couple of dozen people, tops. Hopefully you at least have friends you can spam about your new posts in the beginning.

These days, when I write things, I know that thousands or tens of thousands of people are going to read them. If I include a typo, I’m going to get dozens of emails about it.

I have to think a lot harder before I click “publish”, just because I’ve been in the game longer and I have a bigger audience.

But you – unless you’re already famous – don’t.

Sometimes, I’d kill to go back to the no-pressure days when I knew I could only possibly piss off a dozen people with a post. Now it could be hundreds… Or thousands!

So you, young blogger… I encourage you to enjoy it while you can.

Kill that perfectionist, and embrace the process.

Don’t imitate – just be yourself

“Just be yourself” is maybe the world’s worst advice.

Perhaps we should reword it to “be authentic, and don’t be afraid to be the best version of yourself”.

One of the problems with the advice “just be yourself” is that it’s impossible to really be anyone else.

If I wake up with a hangover and an overdue credit card payment on a Tuesday morning and feel like I’m totally sick of being Mr Chorizo, well…

‘Cause I can’t just drop everything and decide to be Ryan Gosling instead.

This goes for your life as a blogger, too.

I wouldn’t mind having Tim Ferriss’ muscles and millions of dollars. But at best, if I tried, I could be a really bad imitation of ol’ Timmy.

Because he’s got a monopoly on the Tim Ferriss brand that I’m just not going to beat. (Not to mention, he purposely invented “lifestyle design” in order to avoid competing in an existing market.)

Anyway, a blog is a unique opportunity to be authentic. To be you, warts and all.

Nobody’s perfect. Nobody else is ever going to be “you”.

And nobody else is going to be me, either.

I love going to other people’s blogs for inspiration, and to check out what they’re doing. Masterminding with other bloggers is a great way to figure out what’s going on in the industry.

You’ve still gotta do what you’re best at.

Your unique experiences and talents are different than everyone else’s. Your warts are what makes you interesting.

I like to think of my blogging persona – not Mr Chorizo, the one who’s actually earning money – as a kind of superhero.

The combination of all that is what makes a character like Superman one of the most popular and enduring in “literature”.

Your blogging persona will be a bit different than your real-life persona, because of course you can’t express your full personality in 1200 words.

That’s why you should curate a bit and decide what you’re going to express.

Like I said, it probably shouldn’t be some perfect, idealized version of you – if your blog is even about you, to begin with.

My money-making blogs are about English grammar.

I get questions from people who seem to think it’s of the utmost importance to learn the difference between nonetheless, nevertheless and notwithstanding, and I just want to cry.

But even with my boring topic, I’m able to let my personality shine through.

And that’s what allows me to make a living from it, despite the fact that I don’t have a degree from Oxford or any relevant “qualifications” that give me the “right” to be a grammar guru.

So yeah. Just be you.

And if “you” sucks, remember. You’re always changing anyway. Why not change for the better? And while you’re changing, blog about it.

In conclusion, or something…

So. What do we have so far?

You’ve gotta sit down and write. You’ve gotta think about your audience and whether they actually need or want what you’re writing about.

And after that, you’ve basically just gotta embrace Sturgeon’s law, overcome your fear of rejection, failure and sucking in public.

Kill that perfectionist and put something out there.

When you really think about it, all the creators you admire have probably already put in their 10000 hours before you ever hear of them.

After years of hard work and deliberate practice, suddenly…

I’ve asked people who seem to be overnight successes about this. Because I see them and I feel dumb. What’s their secret?

Actually, their secret is that they put in a lot of hard work. For years. While nobody was watching.

What’s next for the Zen of Blogging?

I guess I’ll be continuing this, at some point, with a discussion of different strategies for monetizing a blog.

And of course, one way would be to consult with other bloggers.

Problems getting your blog off the ground?

If you want to hire me, send me a message.

You’re also welcome to sponsor me (if I think you’re cool) or write a guest post.

Hit me up… I’ll be cold and alone, here on the couch, all winter long.

P.S. To be honest, I’m becoming a bit confused as to who’s writing this stuff. Is it Mr Chorizo or is it Mr Daniel? Should I just kill my alter-ego? Maybe there was never an alter ego to begin with… Maybe I’m just a jerk. What do you think? Let me know, right here in the comments.