Crazy for El Gordo: Spain’s Christmas Lottery has locals (and tourists) reaching for their wallets

The lottery is a tax on those who don’t understand mathematics.

Or at least so they say.

And there is no greater demonstration of this quote than the Spanish Christmas Lottery, which unites all Spaniards on December 22nd of each year to hope for the statistically improbable jackpot — “El Gordo.”

With a jackpot of €720 million, it’s the largest lottery in the world.

Over the preceding weeks, every Spaniard you know has been collecting lottery tickets. They may just have one or two, or they may have many more — and if they live in a big city like Madrid, they’ve probably also been sent to buy “lucky” numbers for their family back in the pueblo.

Every number from 00.000 to 99.999 is distributed on hundreds of tickets, which are divided up into participations of 20 euros each.

The people on your football team? Your chess club?

They’re all playing the same number.

The Christmas lottery, like so many other things in Spain, is social — which is why there’s such a lottery frenzy.

Everyone spends months beforehand imagining every Pedro, Pablo and Paco at the office winning a sweet 400,000 euros each, popping bottles of Cava, and jumping around like buffoons in celebration — and then spending their holidays on a beach in the Dominican Republic.

Then they imagine themselves standing back with crossed arms, glowering, having been the only jackass who had the chance to buy the number, but didn’t.

And so they break down and buy it, just in case.

I’ve almost done it myself, on multiple occasions. So far nobody I know has won one of the bigger prizes–in any case, you can win more with one of the other lotteries any other week of the year. 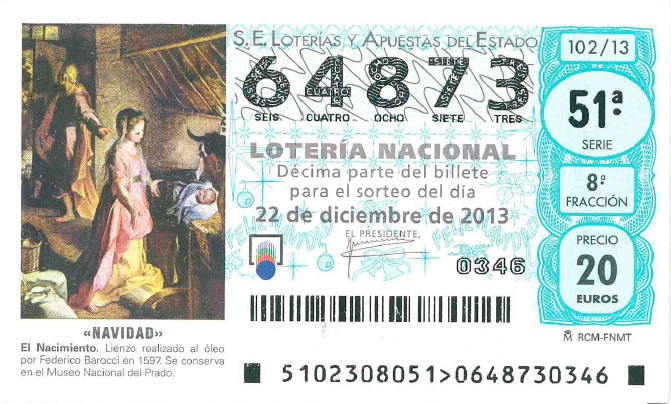 Finally, December 22nd arrives, and the whole country comes to a stop. People all over abandon their jobs and go to the bar, where they clutch tickets in sweaty palms and gaze hopefully at the TV until the jackpot is announced at some point during the hours-long event.

Balls are drawn one by one, first from the big hopper and then from the smaller one, and the numbers are sung out by children from Colegio del San Ildefonso — traditionally a school for the orphans of Madrid.

This is the moment that the 4 million euro prize is announced (which again, is divided into ten participations, each of which win 400,000 euros).

The overall odds of winning El Gordo are minimal, but there are, in fact, fairly good odds of winning something — more than 22 million tickets each year receive some prize, even if it’s just a break-even “reintegro.”

The whole thing moves more than 3 billion euros. I know we’re in crisis and everything, but that averages out to more than sixty euros for every man, woman and child in Spain.

The fuzzy math that makes the Spanish Christmas lottery work

In any case, fuzzy math abounds.

Some people think that people in Madrid win the jackpot more often because of some government conspiracy to favor Castile over the other regions.

Some think that Barcelona wins so often just to keep the Catalonians from seceding from the glorious unified nation which is modern Spain.

However, if you look at the list of cities that have had the most jackpots, you will notice that the top four correspond perfectly with the four largest cities by population. Madrid, Barcelona, Valencia and Sevilla are the luckiest places in all of Spain to play the Christmas lottery. And not coincidentally, they’re the places where more people live and more people buy tickets.

People lining up to buy the Christmas Lottery at Doña Manolita, close to Puerta del Sol.

Close to where I (used to) work in Calle Carmen is one of the most popular places to buy tickets: Doña Manolita. People come from all over Spain, or send their children or grandchildren to buy their favorite numbers.

It’s so popular that all through November and December they have half a dozen security guards on duty just to keep the long line of people under control.

Bad math at its finest: a lot of winning tickets have been sold there, so it must be that Doña Manolita is lucky!

When the final prizes have been awarded, the drawing is finally over, and the orphans stop singing, those who didn’t win get back to work for a few more hours before the never-ending Christmas holidays officially start.

But if you’ve spent half of December’s paycheck on losing tickets, don’t fret — Lotería Nacional has yet another psychological coup in store for you: another major jackpot for the Lotería del Niño, on January 6.

You can thus console yourself by buying more lottery tickets.

P.S. How many lottery tickets have you bought? Let me know in the comments!