6 steps to finding the perfect piso in Madrid

I was sitting in a salón with a woman who reeked of Shalimar and naphthalene balls.

She could have been the 80-year old middle sister of Norma Desmond and Cruella de Vil. The pelt of a very dead animal hung around her neck, complementing the tiger-print headband that stretched out her fiery red hair pulled back in a bun.

She spoke as if she’d just had five cups of café con leche. As she tore through various subjects non-sequitur – from her glory days as a theater actress to the changing landscape of Malasaña to the birth of her third daughter in Caracas – I just could not bring myself to concentrate, mainly because I was agonized by the ungodly paint shade of the walls surrounding us.

A cross between Pepto-Bismol pink, day-old salmon and vomit. I could have died from staring at that color. And my epitaph would read, “Consumed by Bad Taste”.

The only thing worse was the gold-framed painting that hung by the salon window, of ribby hunting dogs lost in an abstract forest of eternal sorrow.

My reverie was vaporized by the woman’s question. Do I like this… flat? Oh, you mean this lost chamber from the nether regions of Purgatory?

And then on cue – or perhaps my powers of telekinesis had improved – a light bulb had burst at that moment.

Welcome to the maddening activity engaged in by most expats who’ve decided to call Madrid their home: the hunt for the perfect piso. Which, according to many friends, does not exist in Madrid. It did feel like Goldilocks and the Search for the Holy Grail. A piso was either too small, or too big, or too weird or too reminiscent of a meth lab. Somewhere in the horizon, however, there was one that was just right (yes, this story does have a happy ending). 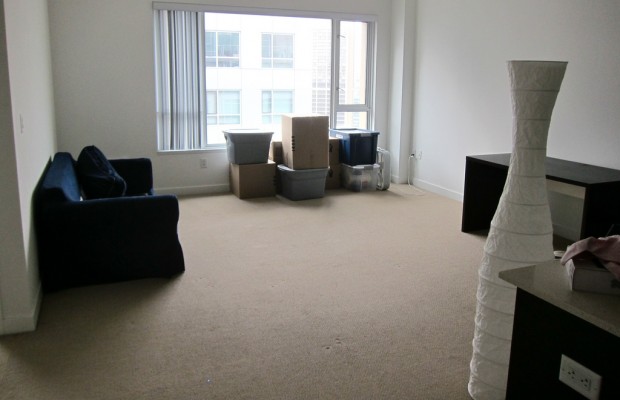 The perfect piso? Maybe… Read on for tips on finding a flat in Madrid.

For all future Madrid piso hunters, this is for you, some personal notes of advice on the mudanza as learned from my month-long search:

1. It begins with the web. Beware of misleading photos!

The search begins with the popular real estate site, idealista.com. As you narrow down your search by filtering the parameters of location, price and size, several attractive options turn up. This is easy! Said I, in those early days of ignorant bliss. No sooner had I discovered that many of those photos were incredibly misleading.

I was lured to the actual property by beautiful online photographs, thanks to the wonders of Photoshop and clever lighting, only to find out that the place was absolutely nothing like the pictures shown. That gorgeous eggshell shade on the walls? Faded to egg yolk. Comfy-looking queen sized bed? Somehow Photoshopped in.

Piece of advice – check out how long the ad has been up. Chances are if it’s been there for half a year or more, gathering cyberdust in the corners of the Internet, there’s a reason why this stunning-looking specimen of interior design is still on the market!

Piso A:
Pros – Affordable, nice neighborhood
Cons – It reminds me of that heroin overdose scene in “Trainspotting”

Piso B:
Pros – Spacious, newly renovated bathroom, lovely dining set
Cons – The sunlight does not quite go through the one-inch slit that passes for a window in this cave on the Semi-sotano floor.

So you’ve found a place, everything seems right and the rent is within your budget. You may soon realize though that you’ll be shafted by the comisiones de agencia – the fee equivalent to one month’s rent that you pay the real estate agency advertising the flat.

Take note, this is not the fianza or deposit that you can claim when your rental contract is over. This is basically the money you say adios to.

I know, it escapes logic – back where I’m from, it’s the lessor who pays the agency, which makes sense since they’re the ones earning from the transaction right? Well, Spain is different! The lessee, apart from shelling out rent and deposit, shoulders the agent’s fee.

So you’re basically paying the dude who turned the keys and pointed out where the bathroom is. (Readers, I am open to a plausible explanation for this counterintuitive business deal).

Piece of advice – try dealing directly with the owner, or “particular” in the listing. They’re few and far between, as most flats you see online are at the behest of the agency, but if you’re lucky you could go straight to the owner, cut out the middleman, avoid agency fees and even have some room for negotiation.

When flat-hunting online started becoming a tedious day-to-day process of appointment and disappointment, a friend suggested to do what she did – walk around the barrios that you like sometime during the day and look for the “Se Alquila” signs.

Sometimes, the owners are inside and let you in right after calling. Some porteros have the keys to these available flats and can show you inside (and he doesn’t charge an agent’s fee).

5. Store your stuff in a trastero.

When it was becoming clear that I wasn’t going to find a place in time to move my stuff to, which after five years of living in Madrid had morphed into a heap of crap, I’d decided to rent storage space for a month.

Bluespace was a lifesaver – for a minimal monthly fee, I had a locker to store my stuff which I could access 24 hours. They even offer a moving service for that fateful day when you finally move into your new home.

6. Take your time and trust your gut.

After almost a month of flat-hunting, I thought I’d found “the one” and almost signed on the dotted line, though my gut was telling me to hold out for something else. Thing is, to paraphrase Nick Hornby in “High Fidelity”, frankly speaking, my guts have shit for brains.

But something about my future landlady didn’t sit too well with me – so I declined at the last minute. She then sent me very nasty texts and I took that as a sign that my gut was finally being useful to me.

And it was a good thing I did, because a week later, the piso gods responded to my prayers and finally led me to the right flat. Patience is a virtue rewarded indeed.