I’m from one of those “red states”.

One of those places in the US where people go through life heavily armed, with a Bible in their front pocket and can of chaw in back, ready to go to war against whoever threatens their American Way of Life.

Gun-totin’, bible-thumpin’, patriots, as far as the eye can see.

And according to everybody around me back there, I was getting a pretty good deal, growing up in the desert outside Phoenix, Arizona.

Because most people in the rest of the world were living barefoot in mud huts and wishing they could someday come to America, where everything is awesome all the time.

When I was a kid, that attitude seemed ridiculous, but at least it was “normal”.

How could I argue?

It was all I knew.

If you spend your whole life living in one place, you tend to think that what’s happening around you is just human nature.

And moving to another country is an eye-opener, because you find people acting very differently –– yet also believing that what they’re doing is “normal”.

It teaches you a lot about your own culture, and perhaps a thing or two about human nature as well.

I didn’t know it when I was stepping off that airplane at Barajas airport at the tender age of 21, but I was going to learn a lot about American life by living in Spain.

Here are just a few things that have become clear to me in my years in Madrid:

On one of my first days in Madrid, a European friend took me to Parque Retiro.

Once we were there, she sat down on the grass, took off her shoes, and proceeded to do absolutely nothing for the next four hours.

Sitting and doing nothing was an activity I had managed to spend more than 20 years of life without attempting. It was surprisingly difficult. But the whole park seemed to be full of hundreds of people doing the same thing: just sitting. 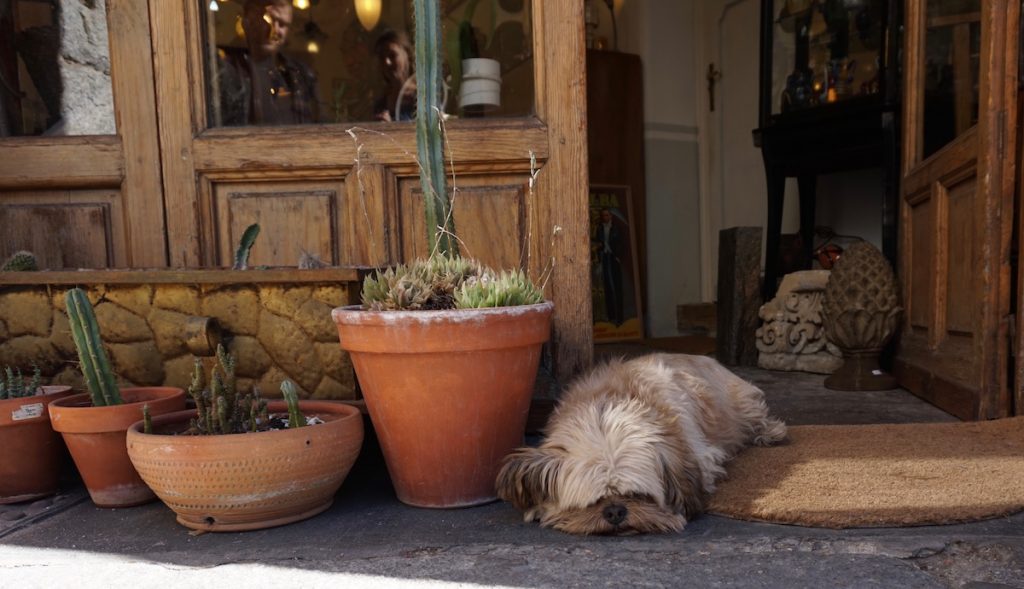 Not even the dogs work like a dog in Spain. In fact, they spend a lot of time lying around.

When I started working, the next thing I was shocked by was the number of holidays. A holiday on December 6th and another one on December 8th. The seemingly never-ending holiday period going from Christmas through New Year’s and on to Epiphany on January 6th.

All the saints and all the important events in the lives of Christ and the Virgin Mary have a public holiday.

Whatever that is (not even most Spanish people know), it’s a day off work.

And in Spain, even if you are working, there are plenty of excuses not to work too hard.

The main concern, apparently, is just to put in as many hours as possible. What you do there is largely irrelevant… Go ahead and update your Facebook page. Go outside for a smoke. Have a half-hour-long conversation on your mobile. Take another coffee break.

It’s all fair game, as long as you’re spending eleven or twelve hours a day in and around the office.

Known locally as “la cultura del presentismo“, it’s a stark contrast to the American idea of “Work yourself to death’s doorstep during the week and then shop till you drop in your free time”.

But Spanish people seem to believe that relaxing and enjoying life are important activities that are worth dedicating time to, when you’re finished clocking those long hours at the office.

(I guess I should add the disclaimer that this point applies mostly to people who work in offices. Service industry schedules are much different – and much worse.)

Because of American Culture, we’re all secretly puritans

We might not dress like the Pilgrims in an elementary school Thanksgiving re-enactment, but we Americans are puritans just the same.

Do you remember the Super Bowl in 2004, when a half-second of Janet Jackson’s nipple shield caused a national controversy that went all the way to the floor of the Senate?

What is a nipple shield anyway?

‘Cause that’s about when I decided I needed to leave the country.

Apparently, in middle America, it’s okay for children to spend their early years sucking on nipples. But after about age three, seeing a woman’s nipple will turn them into some sort of sex-addict degenerate.

Spanish TV, on the other hand, has its fair share of nipples, not to mention asses, and as far as I can tell, nobody’s childhood has been ruined.

The original puritans, it must be said, weren’t necessarily the dour, humorless fanatics we portray them as these days. They enjoyed alcohol in moderation, and considered sexual pleasure (within the bounds of marriage) to be a gift from God.

So I don’t know exactly what happened, but at some point in American history, the most boring elements of society managed to take over and convince everyone that they had to be bland and inoffensive –– that enjoying your life too much was somehow immoral.

Modern American puritanism shows itself in many other ways, besides the classic nipple-aversion: we’re also terrified of colloquial expression and alcohol, two things that any sane European recognizes to be part of what makes life enjoyable.

Spanish proverbs are full of references to healthy mammalian behavior that would shock and awe your parents, and strangely, nobody seems to mind.

Of course, in the States, you’d better be prepared to use some four-syllable latinate euphemism for any anatomical or sexual references; the children might hear you using four-letter words and somehow end up in prison, or worse, in hell for all eternity. 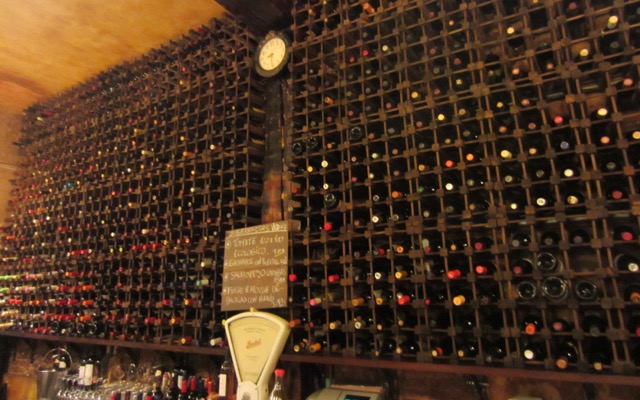 Drink wine and enjoy life… you’re in Spain! That impressive wall of wines is at El Tempranillo, Cava Baja 38 right here in Madrid.

Drinking is also much less stigmatized in Spain.

Do you want to have a glass of wine with lunch? Nobody’s going to think you’re an alcoholic for doing so!

Have two. Or three. And then stop.

Binge drinking is still frowned upon – in fact, it’s mostly an activity enjoyed by pathetic British and American tourists.

The point of alcohol is to enjoy yourself, not to get falling-down drunk and end up hung over, having no idea of where you were the night before.

Prostitution is also “more or less” legal (and more or less accepted as a social institution), and I believe you can grow some small amount marijuana at home in Spain.

Consult a lawyer before doing either. Don’t tell the judge you read it on this blog.

But if the lawyer says it’s cool, go have fun!

The American Dream is very different than the Spanish Dream

We all know about the American Dream –– it involves lots of extraordinarily hard work, accumulating wealth, and then moving to some sort of gated community in the suburbs to tend to your front lawn and buy expensive things that you don’t have time to use.

But what do they dream of?

For large segments of the Spanish population, in fact, the dream is to get a government job where they can work as little as possible and never be fired until the happy day when they retire and can continue living out their long lives receiving a pension. 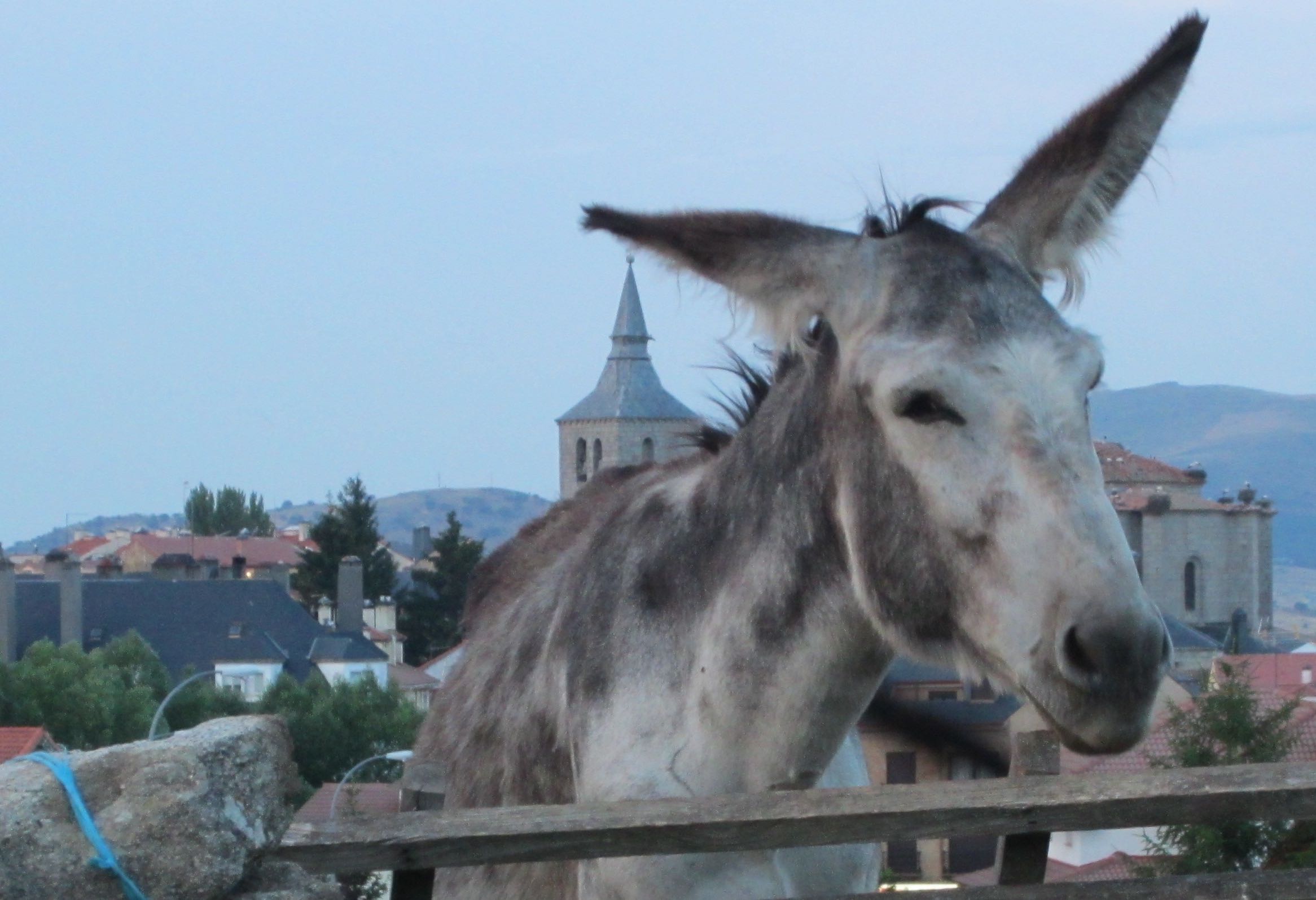 Donkey ownership: no longer a big part of the Spanish dream. (At least for most people I know.)

Accumulating personal wealth doesn’t factor into most people’s Spanish dream. Why save money if the government is always there to take care of you?

If you ever hear an American telling a story about hitting rock bottom, it usually goes something like this: “Well, after my divorce I ended up living in an 1100 square foot apartment by the side of the highway. It was hell, but I guess it was either that or live in my car.”

What they don’t know is that their version of rock bottom is someone else’s highest aspiration.

And being able to afford to live there alone? Sheeiiittt.

That’s almost too much to imagine. Not to mention that even at rock bottom in the good ol’ US of A, you still own a car!

You’d have nothing to complain about if that described your life in Spain – except, perhaps, that you’re “throwing your money away on rent” when you could just buy your 1100 square foot apartment and live there forever.

(Or just live with your parents at age 50. But that’s another story.)

Your idea of “fat” is relative

I’ll always remember the day that the conservative talk radio station in my home town started talking about the Body Mass Index.

The government had just decided on the BMI as the official measurement for obesity, and Paul Harvey told us all how to calculate it.

So we all sat down as a family and worked it out, dutifully squaring our height in centimeters or whatever. My parents both clocked in at obese.

“That’s impossible! I’m not obese, I’m the same size as everyone else at the office!”

And they went on living their obese lives as if nothing had happened, walking from the front door to their car, from their car to their desk, and maybe once a week getting winded going up and down the aisles at the supermarket. 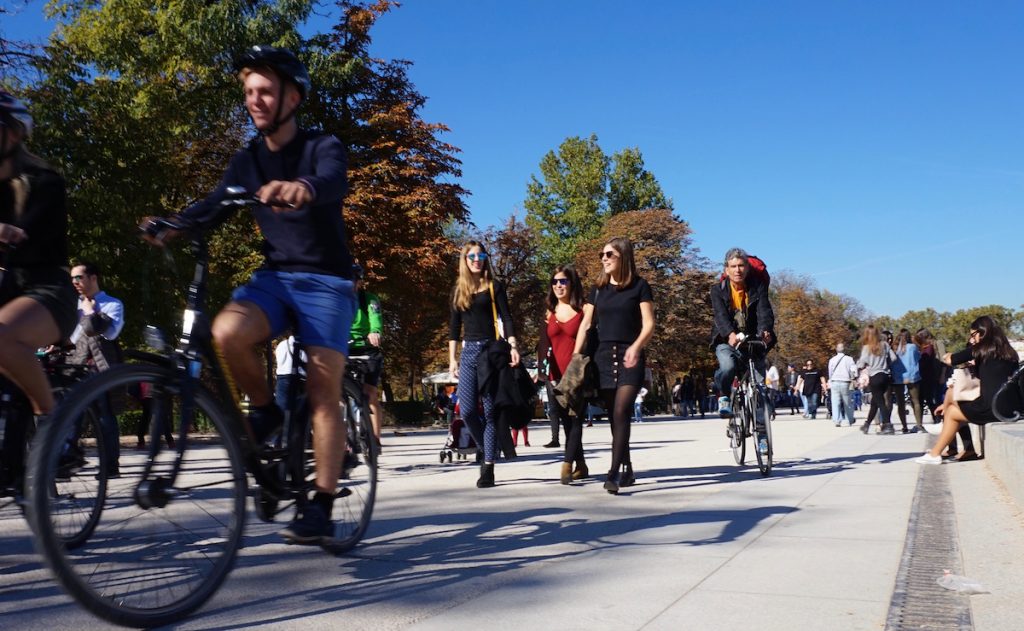 Just another day in Parque Retiro, without an obese person in sight.

What was going on?

Well, in the US, obesity is epidemic, and fat is the new normal.

In Europe, most people’s lifestyles involve at least a moderate amount of walking and natural healthy food.

So, while obesity is on the rise, it’s nowhere near US levels… yet.

And life goes on, on both sides of the Atlantic

I can hear what you’re saying already: “But Daniel, you’re generalizing. We’re not all like that! My cousin Nuria is a hard working obese Spanish puritan with an investment account!”

Or maybe you’re saying: “I’m American and I just got out of rehab for my sex and drug addiction ––caused by seeing a nipple once when I was a child! Now my highest aspiration is to share a 900 square foot flat with two other people and be able to afford a bus pass, just like people in Spain!”

Well, you’re right. I am generalizing. It’s impossible to talk about large groups of people without making some generalizations.

In any case, I have come to appreciate that most people aspire to be “normal” and that their definition is based on whatever the people around them are doing.

P.S. What have you learned about your culture while living abroad? Let me know in the comments… thanks! And if you want more, I’ve got part 2 of this article here: Cultural differences between Spain and the US… Part 2!

P.P.S. If you really want to integrate into the way of life, you should learn Spanish. And I’ve got a Spanish language school that will help you: Spaneasy here in Madrid.