Take a walk through Madrid’s history at Almudena Cemetery

October is here, Halloween is right around the corner, and the day after that comes All Saints’ Day – a celebration of the many lesser-known saints and martyrs of the Catholic church.

All Saints’ Day in Spain is not a huge celebration, but you will see a lot of older people taking bouquets of flowers to go visit their loved ones at the cemetery.

(And of course, if you’re reading this in some month that doesn’t happen to be October, I heartily apologize.)

In any case, there are several cemeteries in Madrid, but the main one is Cementerio de la Almudena, and here’s a fun fact you can use to impress your friends—there are more people buried in Almudena cemetery than current living residents of the city.

About 5 million dead have been buried at la Almudena, while the city proper now has just over 3.2 million living souls. 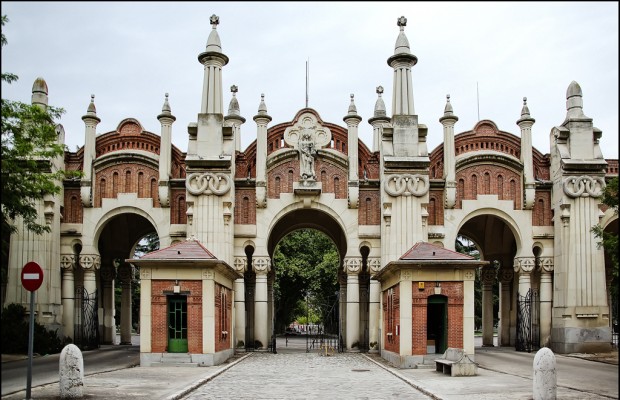 A lot of Madrid’s history has passed through the modernist gates of the cemetery since they started burying people there during a cholera outbreak in 1884. The cemetery was actually still under construction at the time, but the outbreak was taxing the capacity of the other local boneyards.

Its location in La Elipa district was part of a plan originally set into motion during the Napoleonic occupation to improve public health by building new graveyards outside the city. In the years since, the city has grown a lot, but even today, it’s still a bit of a hike to get there, out on the other side of the bull ring at Ventas.

All sorts of famous Spaniards are buried in La Almudena, and it’s a challenge finding them among all the other tombs. The most important monuments, in any case, are close to the entrance.

Some of the more recognisable names include:

However, one of the most impressive stories to have taken place within those crumbling brick walls is that of Las Trece Rosas.

The story of Las Trece Rosas

Las Trece Rosas were thirteen young girls, about half of whom were members of a socialist party at the end of the Civil War.

When the fascists took Madrid they were imprisoned in the nearby women’s prison at Ventas (long since demolished).

After being tortured and humiliated by their captors, they were taken out of the prison and shot by a firing squad against the wall of the cemetery.

Between 1939 and 1945, more than 2500 other political prisoners shared their fate—many are still buried in unmarked mass graves. 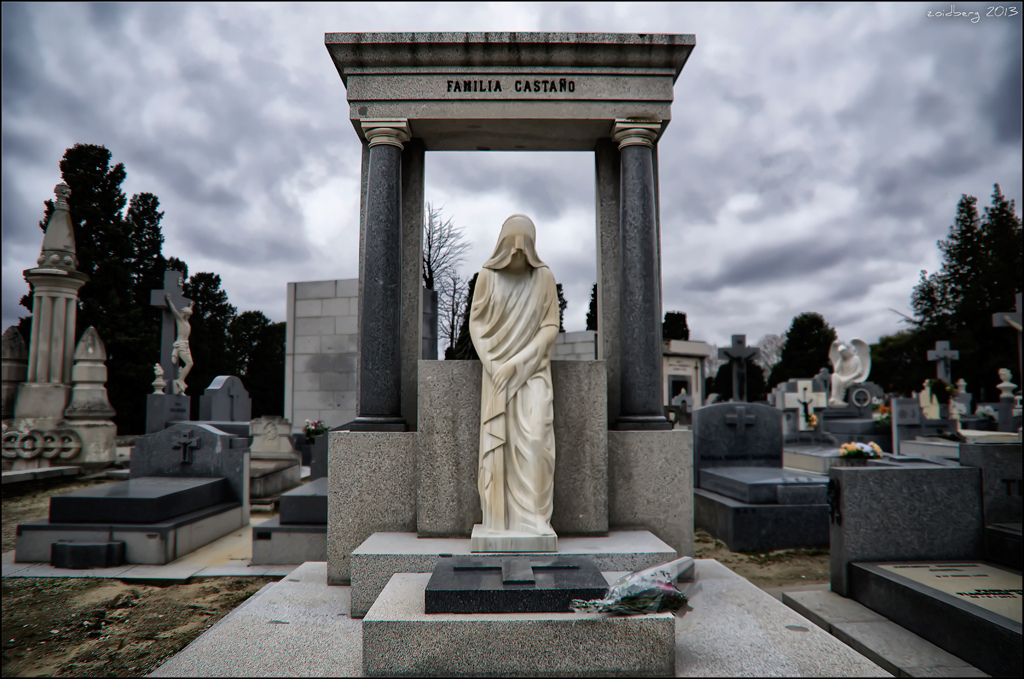 Photos for this article by Dr Zoidberg on Flickr.

If you’re interested, a novel entitled La Voz Dormida gives a vivid description of the lives of women in Madrid in those years—inside and outside the prison at Ventas.

It’s truly a great book that gives you a glimpse of what everyday madrileños were going through a couple of generations ago. The author is Dulce Chacón and you can also find it in English under the title The Sleeping Voice.

Today there’s a monument to those girls, and the street going by the west side of the cemetery was recently renamed Avenida de las Trece Rosas in their honor.

More of my favorite books about Spain here.

Memories of Spain’s fascist past

Of course, there are also members of the other camp, who were laid to rest nearby during the same period.

On the other end of the political spectrum, many members of the Condor Legion (a group of Nazi soldiers sent by Hitler to help Franco during the Civil War) are still buried in Almudena cemetery.

Up until 2012 they were even celebrated with a plaque using fascist imagery until it was finally removed by the German government at the request of Madrid’s socialist party.

Nearby, you can find a monument to the División Azul, a group of Spanish volunteers who fought with Germany on the Eastern Front during the Second World War. The monument is still the scene of controversial right wing demonstrations and counter-demonstrations from the left.

It’s all a fascinating part of Spain’s troubled recent history and current struggle to make sense of what happened.

If you want to visit the cemetery, the nearest metro is La Elipa on line 2.

While you’re at it, check out the Ventas bull ring on the other side of the highway—it’s an impressive example of Neomudejar architecture (a sort of imitation of Arabic styles that came into vogue in the early 20th century).

Have a happy Halloween and a solemn Día de Todos los Santos—and while you’re at it, don’t forget to try the typical sweets available for the occasion—huesos del santo and buñuelos. You can find them in your local bakery.

Have you been to Almudena Cemetery? What did you think?

Let me know in the comments!

P.S. For much much more, take a look at Pros and Cons of Living in Madrid, or Madrid vs Barcelona. Or maybe, after walking around the cemetery, you’d like to know about the meaning of life. In any case, have fun!