The familiar flavors of ginger and garlic, cilantro and chili mangoes took me right back to Southeast Asia – back to the crowded alleys of Bangkok, still heady with the wonderful sting of spicy tom yum goong. Back to the thatched roof restaurants of Bali, wolfing down platefuls of pork satay. And back to the sunset bars of my favorite island in the Philippines, my home country, sipping mango rum shakes with tipsy friends as the sun melted over the sea.

Indeed, Tuk Tuk is a little slice of Asia in Madrid, an honest-to-goodness culinary corner serving just really good Asian street food with an affordable price tag. And it’s about time too – Tuk Tuk is an oasis in a landscape of cookie-cutter Chinese restaurants and trendy gastro-bars mushrooming all over the city.

And it’s all thanks to Ricardo Alexander, British entrepreneur and Asian food enthusiast. Take a moment to savour that tidbit – a British restaurateur rocking the Asian food scene in the capital of Spain. ¡Viva la globalización!

Rick developed a passion for Oriental cuisine while living in Asia for much of his life. His life story is fodder for a novel – at 15, he moved to Hong Kong to fulfill a teenage dream to meet Jean-Claude Van Damme. The risk paid off, for not only did he meet his idol, he ended up working as a movie stuntman for ten years.

He then played in a rock band that allowed him to tour extensively around South East Asia, and he eventually spent the next decade of his life living in Thailand, the Philippines and India. It was during this adventurous time in the Far East that he explored the real crucible of Asia’s kaleidoscopic cuisine – the crowded backstreets of his adopted Asian cities. He soon learned to recreate the bold flavors for himself, and these wonderful culinary creations – what he calls “Asian comfort food” – are what grace the menu of Tuk Tuk today.

“Our menu is completely designed around what I would eat in everyday life. It’s fun food!” Rick shares, “It’s the one thing I’ve never seen on an Asian menu in Madrid. I’ve never been to a Thai restaurant here and had a fried egg on my meal. In Thailand, almost every meal you have has a fried egg on top of it.” He then points to a Tuk Tuk favorite, the  gai pad grapao kai dao, a Thai street food staple of stir fried chicken with basil and chillies, topped off beautifully with a fried egg.

Another Tuk Tuk standout that is arguably a rare phenomenon in Madrid — good service.

“We wanted to give people good value for money and the American style of customer service – people are willing to spend a little more money to feel they are taken care of,” he says. 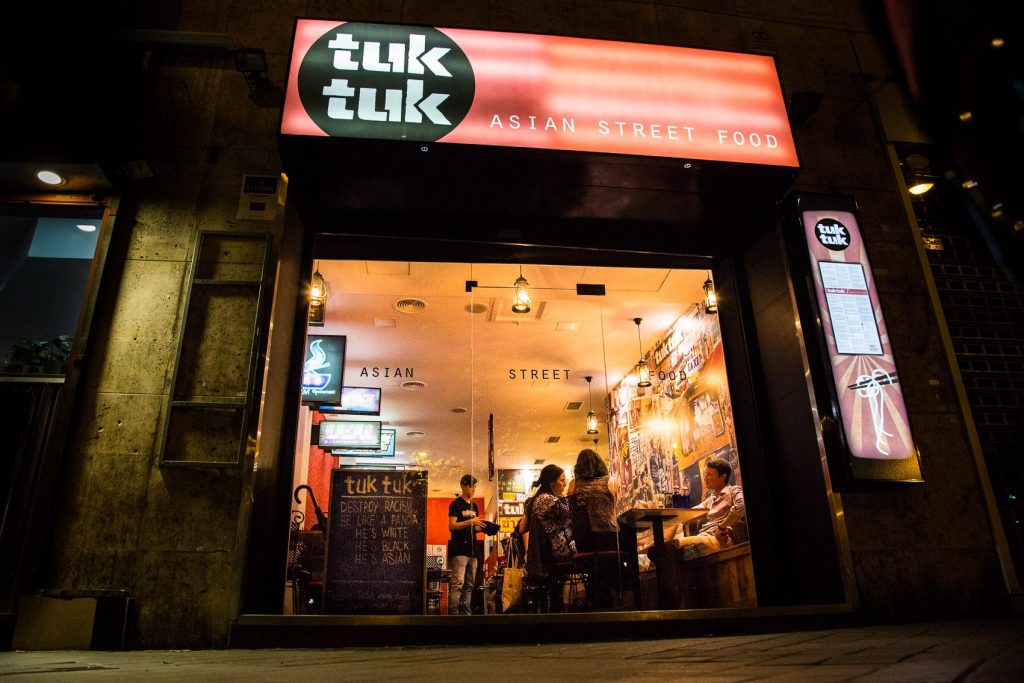 ‘Not the sexiest place’

Ironically, Tuk Tuk was envisioned to be a simple Asian food takeaway. But as good reviews spread by word-of-mouth, more customers came in and wanted to sit down and stay after ordering their meals.

“I think a lot of Spanish people still don’t understand the concept of a takeaway, like in the UK or in the States,” Rick says.

It was reason enough to add more tables to the little cantina. Soon, more customers called in advance to reserve tables. It wasn’t long before Tuk Tuk became fully booked every night, and then fully booked two weeks in advance.

“It was all very strange! That is why when some people would get a bit shocked when they went to the Bilbao branch — ‘I had to book to come eat here?‘ Because it doesn’t look like a restaurant, it was supposed to be a takeaway, which is why the original branch is not exactly the sexiest place to look at.”

Growing customer demand led Rick and his business partner, Alan Butler, to open a second Tuk Tuk branch on Calle Barquillo – this time with more tables distributed around three floors and an exquisite central bar – and all in just less than a year of operations.

The spice is right

Success did not come free of challenges, especially in a competitive industry that sees two thirds of all restaurants close before their first birthday (at least according to Gordon Ramsay).

“A lot of people don’t realize that opening a restaurant means 16 hour days, 7 days a week for the first year,” Ric says. “It’s hard work, but I’d rather do 16 hours a day for myself than 8 hours a day in an office with a boss hovering over me. You feel more empowered when you do it yourself.”

So what about catering to the spice-phobic Spanish palate – you know, the one that screams “¡Ay, que pica!” when it gets within ten meters to a jalapeño.

“Believe it or not, toning down the spice hasn’t been a problem. What we found out is that a lot of Spanish do want to eat spicy food, a lot of times they just haven’t been given the chance,” Rick shares. “A lot of restaurants try to adapt too much to the Spanish market, when they should just go in and make fun food.”

Again, there’s that “fun” factor – but not without reason. Rick believes that Tuk Tuk is part of a global, youthful revolution taking shape in Madrid. “There has been a cultural movement in Madrid over the past 3 or 4 years. Right now, I think Spain is having what London had twenty years ago. There’s just an abundance of fun, hip, themed restaurants with wonderful motifs, and great different food, and we’re doing something that no one else is doing.”

And then of course, there are the critics. Take the blogger-slash-self-proclaimed restaurant critic who ordered a six euro meal and wrote a whole essay on whether it was good or bad. Or the ones who compare Tuk Tuk with StreetXo with such astute observations as “the food is good but the decoration in StreetXo is better”.

“We just kill them with kindness,” Rick laughs. “We weren’t supposed to be anything fancy – more sassy maybe, we are just about having a completely enjoyable time with friends and good comfort food.”

And judging from Tuk Tuk regulars – ranging from the kitchen staff of a certain Michelin-starred, Asian-Spanish fusion restaurant, to Asian embassy diplomats, to the cosmopolitan expat crowd in Madrid, you just know they’ve found their niche.

“We get a lot of expat Asian customers – it’s really good that they come, it makes us know that we’re doing something right.”

Got you cravin’ for Asian? Visit Tuk Tuk’s website: tuktukstreetfood.es

Photos for this article by Jane Mitchell.

P.S. Want some more fun? Check out L’Artisan or the decline of typical Spanish bars. And also – cocktails in Madrid.