Today I celebrate 12 years of life as an expat in Madrid!

I still don’t know why. But it’s fun.

To celebrate, I wrote this for my students on my serious website. But it turned out rather well, so I’m sharing it here, too.

Mr Chorizo added a few notes… you know, things Mr Daniel didn’t want to share with 100 thousand people on his other website for whatever reason.

Those are in brackets. The rest is Mr Daniel, keeping it real.

It’s been 12 years since I moved to Spain.

I first came here on vacation with my dad, in August 2004. We were in France for a week, and Spain for a week.

[Typical American thing to do… let’s see Europe in two weeks! A different city every day. I have very few memories of any of it.]

At the end of August, we were in Granada, and I met a girl. She wasn’t Spanish, but she lived in Madrid.

She was an Erasmus student. And I was very young. 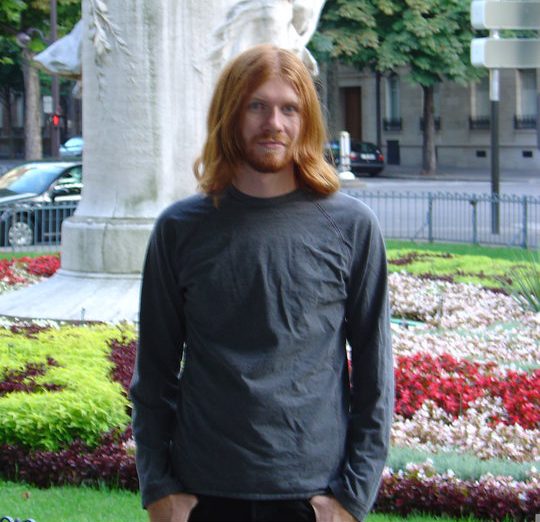 I went back to Arizona, but suddenly my life wasn’t working out. Soon I found myself with no job, no house and no girlfriend…

And all I could think about was that girl back in Madrid.

So I called her. And offered to come and visit.

She said it sounded like a good idea, so I came.

[Actually, she said something more like “Listen, I’m not in love with you or anything, but if you want to come to Europe, go ahead.” Also, take a look at that haircut. “They should have shot me crossing the border”, says much older and more conservative Mr Daniel. The truth is, though, girls were all over me back then.]

Anyway, I arrived in Madrid on an overnight flight from Philadelphia, on October 21st, 2004, and called her from the airport.

She told me to meet her in a plaza in Alto de Extremadura (not the most exciting part of Madrid).

It was a cold and rainy morning in October, just like this one, when I got off the metro and started my new life. I sat in the plaza waiting, in the rain, with the distinct feeling I was making a huge mistake.

What happened after that?

Well, I found a room to rent in Lucero (near Alto de Extremadura, and even less glamorous).

[We had people in the neighborhood who would shoot pigeons with pellet guns in the park, and cars would be set on fire at night. I didn’t realize it was such a dump at the time, because for me it was all just Europe… Look, ma, real buildings!]

I studied to be a teacher. I got a job. I learned a lot of Spanish. The girl went back to her country. I made some other friends.

And for some reason I stayed…

And I had always liked writing. During my first year in Madrid, I wrote a novel.

It was never published.

[When I say it was never published, I mean I decided the world would be a better place without my novel. It’s still sitting around at home somewhere. But I’m not gonna do anything with it.]

I moved to a house in Embajadores. And then another house in Puente de Vallecas.

[Note to self: don’t date Basque girls. If I had learned that one back in 2006 or whatever, I could have saved myself a LOT of pain later on.]

With my heart broken, I started writing even more to keep myself busy.

I also started boxing. If you think having your heart broken hurts, you should try being punched in the face. That hurts more.

Everything looked good, and except for the occasionally broken heart, I was happy with my life in Madrid.

It was sure more exciting than Arizona.

Life as an expat in Madrid goes on…

Eventually, I got a new girlfriend, this time from Italy.

And then, a few years ago, my grandmother came to Spain. She loves to talk, and we talked about travelling. She’s travelled around the world several times. And I listened to her, and thought “I want to travel around the world too!”

I decided to start writing about English because I wanted to have the time to travel (and a bit more money too). And I had decided long ago that writing novels wasn’t a good life strategy.

So I started writing a blog about English. And getting followers. And writing books. And making videos.

[My first idea was to use “I have a website” as an excuse to charge more for private lessons. Then the economy collapsed. So I changed it to “hey, let’s get rich by selling $3 ebooks”. Both terrible ideas, in retrospect.]

About three years ago I moved to the north of Madrid, to the romántico barrio de Tetuán. I broke up with my Italian girlfriend. (This time it was actually my idea, so it wasn’t all that heartbreaking.)

And soon after that I decided to quit my job and be a writer and blogger full time. I was tired of getting up at 6 AM to go to my first class, and tired of getting home at 8 PM after my last class, after a long bus ride outside the city.

[Actually I was tired of being treated like a nobody when in fact I was a best-selling author, and I was finally earning enough money to make quitting my job seem reasonable.]

So I quit, and here we are.

I’ve learned a lot in these years.

But mostly, what I’ve learned is that your life is what you make of it. Everybody has difficult times. The economy collapses (like Spain’s did several years ago), or your girlfriend leaves you for someone else, or your landlord threatens to kick you out of the house.

The important thing is what you do next.

Do you complain? Or do you take action to make tomorrow even better?

This is kind of like learning a language. You can complain. You can say “This is hard!” and use that as an excuse to give up.

You can feel bad about where you are now, and focus on your obstacles.

Or you can dedicate some time every day to improving where you are now, and focus on overcoming your obstacles.

It’s a choice we all make. And we make it every day.

[Fear doesn’t go away. The warrior and the artist live by the same code of necessity, which dictates that the battle must be fought anew every day. — Steven Pressfield.]

And now, 12 years of life as an expat in Madrid

I’ve had some good times here in Spain, and I’ve finally had the opportunity to travel, too. I’ve been all over Europe, at least. And soon I hope to start travelling “around the world” in a serious way.

Recently, I’ve been to Portugal, Hungary, Croatia, The Netherlands, Ireland, the UK and more. I celebrated my 11th Spainiversary last year in Sevilla.

I wrote more books and made a lot more videos. I got my heart broken a couple more times. 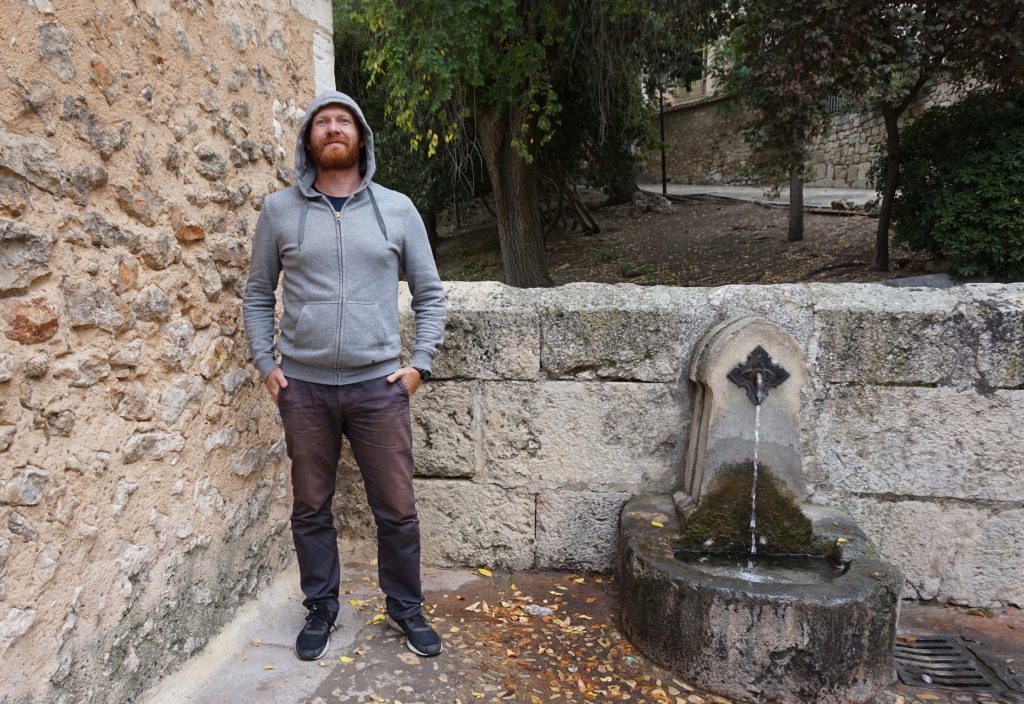 I never really expected to be in Spain so long. Actually, I had some strange idea that I was going to die young, so I didn’t really have any sort of plan for my life for a long time.

All those poets and rock stars died young, after all. And I couldn’t really imagine my life at age 27 or 30 or 35. So I just figured I wouldn’t live very long.

[I was really annoying when I was younger. But honestly, it seems like Arizona was full of people being annoying in different ways. Anyway, I’d be happy to slap some sense into 20-year-old Mr Daniel, as soon as the prices for time travel start to go down.]

That’s another thing my grandmother (and grandfather) made me realize later. People in my family live a really long time. And whatever happens, life goes on.

Who knows what’s next? I should be able to continue writing about one thing or another for a few more decades. And travelling. When I was 21 and just arriving here in Madrid, that was all I really wanted to do. And now I’m doing it.

[Actually, I’ve basically achieved every life goal I had when I was younger. They weren’t such big goals, as it turned out. Time to get some bigger ones. Like dominating the internet, and becoming famous on Youtube. And having a really cool life as an expat in Madrid. ]

It’s all turned out much differently than I expected. Being a writer, these days, is different than it was a decade or so ago. And so is everything else.

But all in all, it’s going pretty well.

Life, my friends, is good.

And thanks, as always, for reading.

P.D. Spainiversary is what we guiris call our anniversary of living in Spain. We consider it to be a real word, just like selfie or LMFAO.

P.P.D. For SEO reasons, I keep using the phrase “life as an expat in Madrid”. Because it’s all about pleasing the Google bots in the end, isn’t it? See 5 big questions I’ve been asking myself since becoming a professional blogger for more about that.

P.P.P.P.D. I’m rereading this on my 14th Spainiversary, and not much has changed, except the fact that I moved to Barcelona in the meantime. Otherwise, I’m the same guy. A couple years older and a bit less optimistic. Oh well.

Thanksgiving in Spain – How to Celebrate Turkey Day Abroad