The long, hard road out of Vielha

To the south of Vielha the path heads up the mountain.

The river is on my right, and the last houses of the village are behind me. It’s only farms now. Horses, goats. An occasional old guy driving a tractor.

My objective is Pòrt de Vielha, a mountain pass about 8 km from the center of town. Town, in this case, being a little ski village of a few thousand people in Val d’Aran, Catalonia.

According to the signs, the ascent takes about four hours. Which from here seems ridiculous.

4 hours for 8 km! They’re clearly underestimating the stamina and fortitude of Mr Chorizo!

That’s what I think.

And so I walk on, through the forest, with the sound of the river caressing the rocks my constant companion. The path is marked with the red and white flags of the GR footpaths. Perhaps this route was the only way out of town and into the next valley at some point before the tunnel.

But now, apparently the tunnel is a sort of national landmark. At over 5km long, it was once the longest road tunnel in the world, and it separates this valley from the rest of Spain. Follow the river in the other direction and you can be in France in a few hours’s walk.

I’ll be going over what the tunnel’s going under – a little piece of the Pyrenees.

Eventually the pavement ends and I’m in deeper forest. There are a couple of turnoffs (one for the entrance to the famous tunnel) and things are starting to get difficult.

Steep, hot, humid. And the flies are out in force. 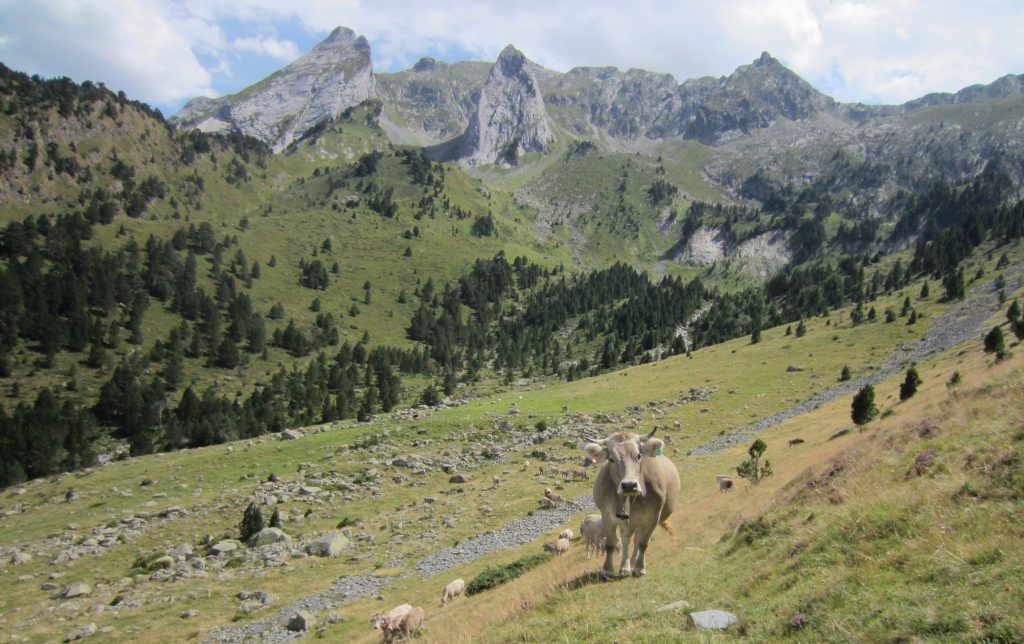 Pyrenees cow on the way up.

A bit more than an hour into the walk, I get to a little cabin on the edge of an adorable alpine meadow. A couple coming down ask me if I’ve seen any mushrooms, and point me in the direction of the pass. The man, tattoos, gold chain, native Spanish with some sort of accent, tells me it’s an hour to the top.

I tell them I haven’t seen any mushrooms, and continue on my way.

The path continues up the hill, across the adorable alpine meadow (which turns out to be much steeper and more difficult than I thought).

Craggy grey mountains lift their heads in the background, and on both sides, perfectly symmetrical spruce trees ring the scene, climbing up towards the treeline.

I cross a little creek and there’s a metal cross stuck in the ground on the other side, painted red. Just after that, a dead cow lies to the side of the path. Belly withered and collapsed, back leg sticking up at an unusual angle, eyes little black slits dried shut.

The stench of death.

Another cow stands about 50 meters off, watching me and mooing. (Threateningly? Maybe it’s a warning. A sign that I’d be better off turning back now.)

A bit further along, things start to get really difficult. The trees are behind me, and up here it’s just grass, rocks and wind.

Sticks planted in the ground or wedged between rocks point the way.

But my legs are feeling heavy and I’m beginning to question the meaning of the whole experience.

What am I doing? And why?

Who am I, really?

If I died up here, would anybody send out a search party? Does the US Embassy take care of American cadavers, or would my mom have to fly out?

A search party probably wouldn’t be necessary, though, because there are two girls coming down. Another hour to the top, they tell me.

I think they must be exaggerating. But their hour to the top is the same thing the tattooed guy told me, way back there below the treeline.

But at the same time I find I’m barely making progress. I walk for 30 seconds or a minute before my legs are ready to give out, and I drop my pack, have some water and a rest, and wonder (again) why I’m doing this.

Then I pick up my pack, focus my eyes on a point in the near distance, and start walking again. A minute or two later, I’m there, dropping my pack and grasping for my water bottle.

It felt like half a kilometer, but what was it, really?

It occurs to me that in the last century, a lot of Spaniards would have done climbs like this barefoot, in winter, with fascists on their trail. Escaping to Toulouse.

The Spaniards in exile would have been like the refugees in today’s crisis. Tens or hundreds of thousands of them, escaping their impoverished and war-torn hellhole of a country, in search of a better life somewhere else.

This valley was actually invaded by exiled communist guerrillas in the 1940s, in their attempt to overthrow fascism and reconquer Spain for the left.

But the thought of the maquis and their chorizo-fuelled fortitude keeps me going for a bit.

Who am I to give up now?

The silence up here is thick and deathlike. But it’s not really silent, I soon realise. There’s the buzz of cicadas. The crunch of my shoes on the rocks.

In the distance, I hear the rumble of an avalanche. Only about 10 seconds of crashing rocks. Then silence.

Is somebody trapped up there? Will there be a search party?

I’m too tired to think about it.

If somebody’s gnawing their own leg off in an attempt to escape from under the rocks, best of luck to them.

A couple of crows fly over, squawking. Between squawks, it’s so quiet you can hear the swish of their wings moving through the air.

I question whether I really want to reach the top.

What will I really have accomplished?

Is it worth it?

I’ve had a lot of accomplishment in the last couple of years, and I’ve discovered that basically, it changes nothing.

Every day I wake up. Yesterday’s accomplishments are gone. The battle must be fought anew. Every day. Forever.

Or until I die.

30 seconds more effort, then a rest. Another pole with an arrow marks the way. 30 seconds more. In the far distance I see a little moving dot outlined on the horizon. Some other brave mountaineer. 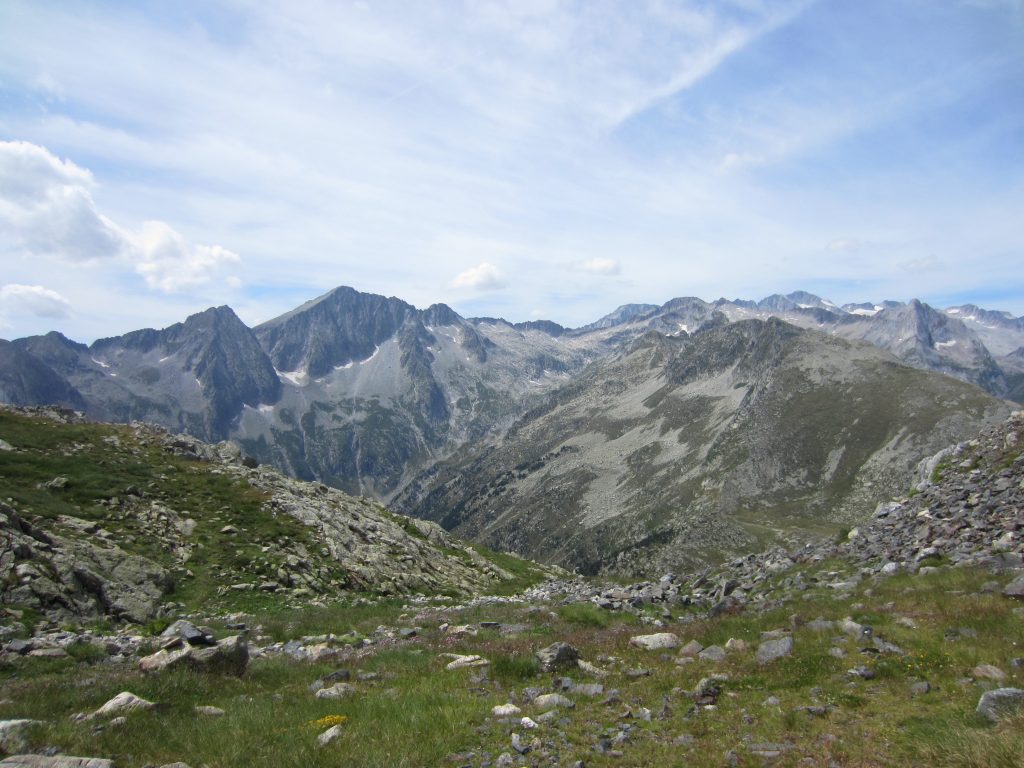 The top. Just more of the same.

Coming around a corner, I finally see what must be the pass.

It’s hard to judge the distance up here, so I can’t tell if it’s 200 meters or a kilometer.

I might still collapse before I make it, I think.

At the top there’s absolutely nothing. A little grassy area on the hump of the mountain. A new line of craggy grey mountains off in the distance.

Nothing but wind and rocks and sun.

Nothing but the memory of the experience of getting up here, and the view of the way back down.

P.S. The title for this article is a reference to Marilyn Manson’s “autobiography” written by Neil Strauss. It’s what I was reading up there in Vielha. I’m not a big fan of Manson, but Strauss is one of the best in the business. Synopsis of the book: Fucked-up kid becomes fucked up adult. Wanted to get famous as payback to the girl who dumped him (a sentiment I fully understand). Did obscene performance art on stage, took lots of drugs, pissed off a lot of Christians. The end.