Digital Nomad Chronicles: Celebrating my first year without a boss

It’s been a year since I gave my last company classes and declared victory over the Spanish labor market.

A full year, but I remember it like yesterday…

It was a warm summer morning, just like this one, as I walked to my last 8 AM class.

The light reflected off the sidewalks along Calle Alcalá, still wet from the passing street cleaners. As I walked into Banco de España, the trumpet played the wakeup call at the military building across the street.

My student would be waiting for me, and a few students more after that.

But in just a few short hours, I’d be done.

How did we get here?

I had started the countdown many weeks before.

I remember texting a friend from the bus at 7:20 one morning. “I just realized there are 11 weeks left in the term. I’m gonna die.”

Back then it was still freezing cold at that time of the morning, and I was catching the bus in the dark.

But somehow the time passed, and I continued to go through the motions at my day job while hatching my escape plans.

And technically, I had started on this journey nearly five years before that.

It all began when I decided that being broke was fun at a certain age, but there was a lot more I wanted to do in life. And most of it cost money.

Most of it, in fact, was going to be impossible if I was still scraping together chump change and just trying to make it through another (unpaid) summer vacation.

Of course I had no idea what I was getting into… And in that sense, very little has changed.

That’s me at Círculo de Bellas Artes. Photo by Gloria at The Blog Abroad.

Anyway, back to the day I declared victory over the Spanish labor market. I was calling it VE Day.

I was soon to find out…

Success is not final, failure is not fatal.

Recently I read something that hit me like a punch in the face.

“Guys quit their day jobs to work on their business thinking it’s going to be smooth sailing… but in fact that first year or two after you go full-time is probably going to be the most difficult period of your life.”

I wish I had known that before all the shit I went through recently.

But on the other hand, it’s a comforting thought. Maybe I don’t suck at business (or life). Maybe it’s supposed to be hard.

And if this is the worst year of my life, I guess I’ll be fine. It’s been intense, and there have been a lot of obstacles to overcome.

But at the same time, I’ve done some cool stuff. I’ve travelled to several new places. I’ve published a couple of books. And most recently, I’ve started a new type of online classes by subscription.

And even when it was sucking the hardest, a lot of that sucking was going on at a local café, or at home on the sofa.

No boss, no schedule, no students.

How bad could it really be?

Time for some hugging and learning.

I love Seinfeld, and I love their guiding principle in making the show: no hugging, no learning.

That’s what makes Seinfeld different than the rest of sitcoms: rather than ending episodes with a big group cuddle where everybody’s happy to be a family, it’s nihilistic and basically pointless.

And that’s what I usually try to do here at the Chorizo Chronicles. (Nobody wants to hug Mr Chorizo anyway, and he’s fine with that.)

But that’s usually, and this is today.

I’d like to give everybody who’s tolerated me the past year a big hug right now to say thank you.

And here are, in no particular order, the main things I’ve learned from this whole adventure so far:

A lot of very intelligent people say you should have 3 to 6 months cash cushion in the bank, just in case everything goes wrong.

That’s whether or not you’re an entrepreneur, I think. It’s just a generally good idea.

Why didn’t I listen?

It turns out, a lot of problems are rather easy to solve if you just throw some money at them. But if you don’t have that money (or if that money is also your next month’s rent payment) they can become much bigger than they need to be.

So listen, kids: before you do anything else, start building that cash cushion. It could save you from lots of unnecessary suffering down the line.

Professional blogging and online info-marketing are small worlds. I think entrepreneurship in general is a pretty small world, actually.

That’s what makes it even more important that you go out of your way to meet people who are in the same boat.

As entrepreneurs, our problems – and our successes – are much different than those of our friends in “normal” society. And just being around people who understand is really important for your (my) sanity.

Also, it’s good to have others around who will push you and inspire you to bigger things and to keep you from being trapped in the mundane.

I can’t tell you how inspiring it is to meet up with other entrepreneurs – they’ve all got ideas I can use, and most are more than happy to share.

Then the execution is up to me.

Until, of course, I manage to hire a team.

I’ve been working out religiously, three times a week, for three years now.

I barely ever miss workouts.

I do pushups and squats on Christmas morning… if Christmas happens to fall on a workout day.

There are a lot of reasons to exercise. The most important one for me is that it makes you re-evaluate your definition of “hard”.

No matter what I’m going through that day, I can walk out to the park and do some pullups or some hill sprints.

And by my second pullup, I’ve forgotten all about the “problem” and I’m totally focused on this new kind of pain.

My recommendation for everyone: eat natural food, and work out hard.

Specifically, get a copy of Convict Conditioning (by my possibly-fictional guru Coach Wade) or Street Workout (by my real, met-’em-in-person gurus Al and Danny Kavadlo) and start on the damn progressions.

Then, hop over to Mark’s Daily Apple for some nutrition advice.

After a good workout and a good meal, you’ll feel much better about your problems. Whatever they are.

If you don’t have health, what do you have?

My Viking ancestors had to build boats to get out of their miserable, cold hometowns. They had to sail across frozen seas and pillage their way across Europe for a living. 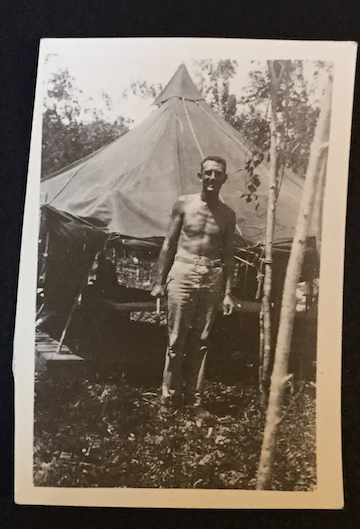 My paternal grandfather spent most of his life in the military. That’s him in the picture, underfed and building bridges in New Guinea. The last generation of men in my family with visible abs.

My maternal grandfather spent his formative years in the Pacific. He was preparing for certain death in the invasion of mainland Japan when the war ended.

Most of our obstacles today aren’t nearly that big. Mine mostly involve online apps and whether people I’ll never meet are going to pull out their credit cards and send me money.

Obstacles, but not that bad.

Of course, there would be no progress if everyone just threw their hands up and went home when things get tough.

But it’s much more productive to take it with some philosophy and love whatever happens to you.

We can’t choose what happens, but we can always choose how we feel about it. And why would we ever choose to feel anything but fantastic?

The stoics would say that you can reframe anything. If this happened it’s because it was meant to happen. It’s exactly what I need right now, to inspire me to raise the bar.

I should do this more. I have a notebook for it and everything. All I have to say is that it works. In the morning (or whenever) write down three things you’re thankful for.

It focuses your mind on the positive. And focus is reality. You get what you focus on.

As Buddha said: “All that we are is the result of what we have thought.”

I have a similar practice that’s just as powerful in which I write down my recent wins. Big wins or small, I add them to a list.

At the time they’re happening, you think you’ll remember those great moments.

But a few weeks later, when the shit’s hitting the fan, the last thing on your mind will be how far you’ve come toward your goals recently or how great you felt about your success last Thursday.

Having the list to look over and reflect is great for bringing you back to reality when you need it.

Well, like your favorite Seinfeld episode, I suppose the conclusion is absolutely nothing.

And life is pretty sweet. I’ve visited 6 different countries in the last year (and a couple of places in Spain I didn’t know about either).

I wake up with the sun, and have no schedule in my day except what I’ve made for myself.

It’s way too late to go back to normal society.

So I’m going to make the best of the bad and enjoy the good. Because life is too short to spend it as part of a company that treats you like just another number on a spreadsheet.

P.S. For more about the bright side of digital nomadry, see Mr Chorizo goes to London, Adventures in Gran Canaria and Serbs and Croats: an eye-opening journey to the Balkans,