I haven’t been very active on here of late, for a series of reasons:

Anyway, I wanted to write today with a few new updates and a few older articles you might like to know about.

In it, I talk about the demise of Café Comercial, and how really, I don’t care. Some of these old Madrid institutions are dying off, and others remain.

Some that die are replaced by something better, with friendlier service and better design.

Were some people offended?

Of course some people were offended!

“Some people”, as it turns out, are almost professionally offended. They must have little else to do.

Anyway, the march of progress continues. And tomorrow, Madrid will be different than it is today. Why worry?

Attentive readers, however, might notice that the sentiment in “Madrid Overrated” blatantly contradicts the sentiment in another article I wrote a year or two ago: Gastro-this and Hipster-that: Lost in the New Madrid.

Oh well… Occasionally I contradict myself. I’m a contradictory person. 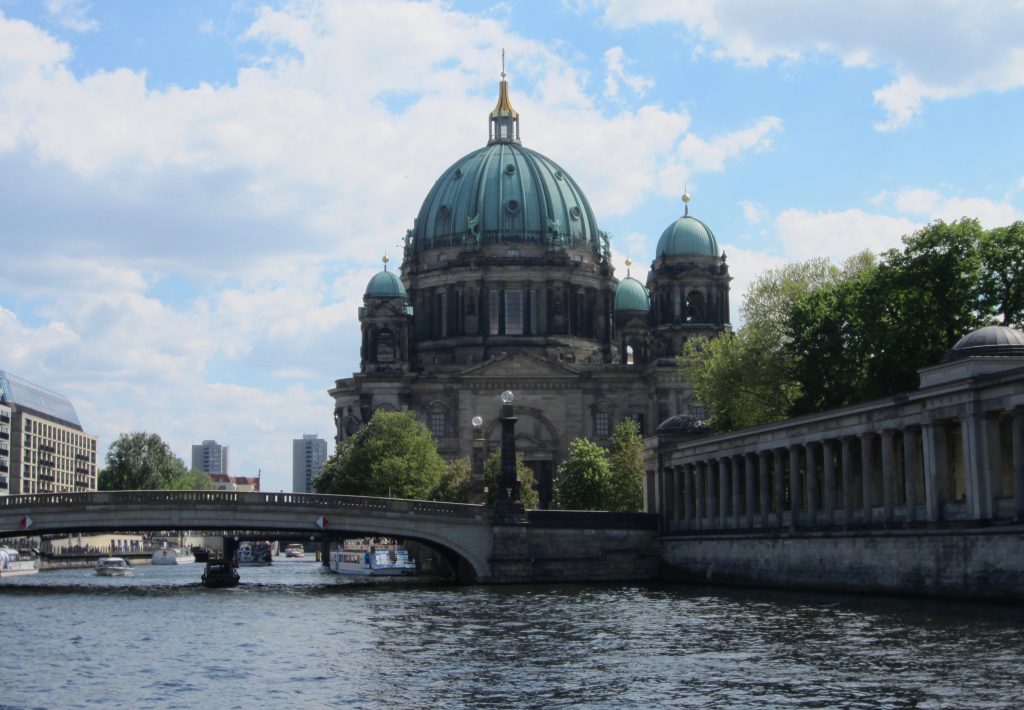 I didn’t take many pictures in Berlin, but here’s one of the cathedral.

Elections were last December and since then nobody’s been able or willing to form a coalition government.

So I guess we’ll be having new elections next Sunday. And this time, Podemos and Izquierda Unida have joined forces: Unidos Podemos!

We’ll see how that goes.

In the meantime, Rita Maestre (the allegedly topless activist and politician) was found guilty of “offending religious sentiment” and fined just over 4000 euros. She’s appealing the sentence, and still in office.

And other than that, the new leftist government in Madrid hasn’t done much that I can see.

However, the truly heartbreaking news is that they’re closing line 1 of the Metro for 4 months. You know, the metro line that connects The Chorizo Chronicles’ international headquarters with the rest of civilization.

Adiós, civilization! I’ll see you on October. (Or I’ll just catch the bus.)

It’s gonna be tough, but I guess I’ll survive.

Older articles about summer in Madrid

As long as we’re here, how ’bout a couple of older summer-themed articles?

Here you have one of my first-ever list posts: Summer in Madrid: 6 Things I’m Excited About. The professionally-offended might not like some of the points I make in there. But hey… my blog, my rules!

If you’re feeling hot and want to cool off, you might try one of my 9 ways to beat the heat like a local.

And summer, of course, is bullfighting season.

I haven’t really lost any friends over coming out of the closet as a bullfighting aficionado… but then again, I didn’t have that many friends to begin with.

That’ll get you started. I’ll probably write something else as summer goes on.

Where do we go from here?

In the beginning of this article, I mentioned that running an online business is more difficult than I had originally imagined.

Last year, on June 30, I gave my last in-company classes, and then went out to get drunk and celebrate my victory over the Spanish labor market.

I was planning for it for months beforehand.

When I would say “Suck it, Europe!” and lie back in my hammock, clicking refresh on my royalty statements and watching the money roll in.

Since then, it’s been almost a year, and quite an adventure. I was expecting a 4 hour work week, and instead I’m working more than ever.

People who have been around the block a few times assure me that this is completely normal. And that yes, having a business is more difficult than one initially imagines.

So, wish me luck!

And I’m going to spend it right here, on my laptop.

P.S. Several friends have been trying to convince me to write a novel. If Mr Chorizo were a literary character, I could probably put him in a variety of strange situations and see what happens. My preliminary title is Sex, Booze and Phrasal Verbs: the Spanish Adventures of a Large Hairy Mammal. And the only problem is I probably won’t have time to write a novel anytime soon. But here’s the question. If I did, would you read it? Let me know in the comments…

P.P.S. Updated: now it’s been 2 years since I quit my job. And things have gotten better. Here’s some more of what I’ve learned.

P.P.P.S. Okay, I wrote the Sex, Booze and Phrasal Verbs article. It’s part two of my life story. Part one is called Days and Nights of Love, Wine and Cholesterol. Have fun!