Is taking your top off in a church a form of protest that should be protected by the constitution?

We’ll find out soon, due to the case of Rita Maestre, the activist who is now spokesperson for Madrid’s city hall, and also on trial for “offending religious sentiments”.

From 21-year-old activist to City Hall in less than 5 years is a pretty good step up the career ladder in any case. Well, folks…

Welcome to the hip new Spain

Here in Madrid, most of the water-cooler talk these days is about our new no-government. Some of the talk is about City Hall’s plans to change some of the street names around Madrid.

But today, another big story is Rita Maestre. 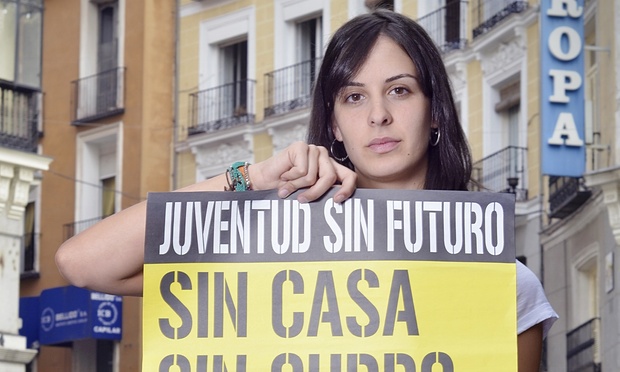 It would appear that a few years ago, Maestre and a group of other activists held a topless protest in a church on one of the university campuses. Exactly how topless is debated, and in any case the church was nearly empty. Apparently there were only two worshippers present, as well as the priest, who had to come out of his office for the occasion.

This was back in 2011, when she was 21 and a student at the university. And things have changed since then.

(If I had to answer for every stupid-ass thing I said or did when I was 21… Well, let’s just say, god help me!)

She has since apologized, to the Archbishop of Madrid no less. And apparently, he’s accepted the apology.

Maestre claims that her intention wasn’t to offend any particular religion, and that it was just a peaceful protest.

The activists reportedly chanted slogans like “arderéis como en el ’36” (“you will burn like in 1936”, a reference to church burnings during the Civil War) and “sacad vuestros rosarios de nuestros ovarios” (“keep your rosaries out of our ovaries”) before leaving.

Topless in church… A crime or not?

The Spanish aren’t exactly terrified of nipples like we are in the US. And it’s not clear whether there were actually any nipples visible to the audience of three during the protest.

But in any case, Maestre (who is still under 30) is on trial and faces a year in prison. She’s the first member of Madrid’s new leftist government to go on trial and the second most notable scandal, after the guy who was demoted after the scandal about his wildly offensive holocaust jokes on Twitter (also several years before he ended up in office).

The big question, though, is about secularism and the role of the government in defending the Catholic Church. Why are there churches on the campus of a public university like Complutense?

And the other question: is this all a big distraction from more important issues? Is a topless protest as important as any of the big corruption cases going on right now?

Probably not. But it’ll be interesting to see how this all turns out.

Want a bit more info? Try this article in English on the Local.

Changing the names of Madrid’s most fascist streets

This has been on the table for a while, and I guess the new government is going to do something about it. Turns out there are an important number of streets here in Madrid named after important fascists and fascist sympathizers.

Most prominent is Calle General Yagüe, named after the “butcher of Badajoz” who ordered the execution of a few thousand civilians during the Civil War.

This week, though, the focus shifted (momentarily) to Plaza Salvador Dalí. Turns out our favorite surrealist painter was a fascist, a fan of Hitler, and also a jerk.

(Reminds me of this article about John Lennon. He was also a jerk, incidentally.)

It looks like they’re not going to go so far as to change Plaza Dalí. But I actually do hope they change General Yagüe and some other streets.

In fact, the local government already changed a bunch of street names back in 1980, getting rid of José Antonio and Generalísimo Franco.

Their names now? You might have heard of them. They’re Gran Vía and Paseo de la Castellana, respectively.

Why not change a few more?

P.S. In other other news, 2 out of 10 Spanish men have admitted hiring the “services” of a prostitute at some point. And imagine the ones who don’t admit it. See also: Local wives turned prostitutes.

P.P.S. I’m not a journalist and I don’t play one on TV. If I’ve missed something big here, please let me know in the comments. Thanks!