Here are four books I’ve read recently, and a few thoughts about each.

I enjoy reading books of basically any kind. As long as it’s interesting reading, who cares?

In any case, we’re well past 6 months into this thing, which means I’ve read quite a few books by now. Some longer, some shorter, and some more interesting than others. Here’s part 1, in case you’re interested: Recent adventures and the book-a-week challenge

Part 2 of the book-a-week challenge

What are your favorite books these days?

Derek Sivers — Anything You Want

This book is brilliant, short, and goes right to the point. As an entrepreneur, it really struck me. In case you don’t know, Sivers is the guy who started CD Baby, which made it easy for independent artists to sell their music online. It seems simple now, but he was really the first on the scene, back before PayPal even existed.

The main point of Anything You Want is this: Working hard on something useful is great. But so is enjoying your life. And Sivers’ biggest idea, at least for me, is that your business is your little utopia, where you get to make the rules.

And I agree. My whole goal with starting my online business (way back in 2010) was, incidentally, to have a more interesting life while working less, not more.

Got a multimillion dollar idea that’ll require lots of hard work, 16-hour days for the next 10 years, no vacation ever, an office in Silicon Valley, venture capital, all that?

I’ll be here with my feet up, my four-hour work week, my monthly vacation, no investors, no boss, no employees.

It’s really a revolutionary idea for most. Keep your business small, because the whole point of earning money and doing anything else is just to be happy. And for a lot of people – I include myself – having some massive Groupon-level startup probably isn’t the best path to happiness.

(You also have to imagine that for every 22-year-old who makes a billion with something like Facebook or Groupon, there are probably a lot more who lose their shirts. But they don’t get profiles in Forbes. So when you think “Oh, oh, I wanna have a startup!” that’s the availability heuristic in action.)

One of my favorite quotes from the book is actually not from Sivers, but from a guy named Steve Blank: No business plan survives first contact with customers. 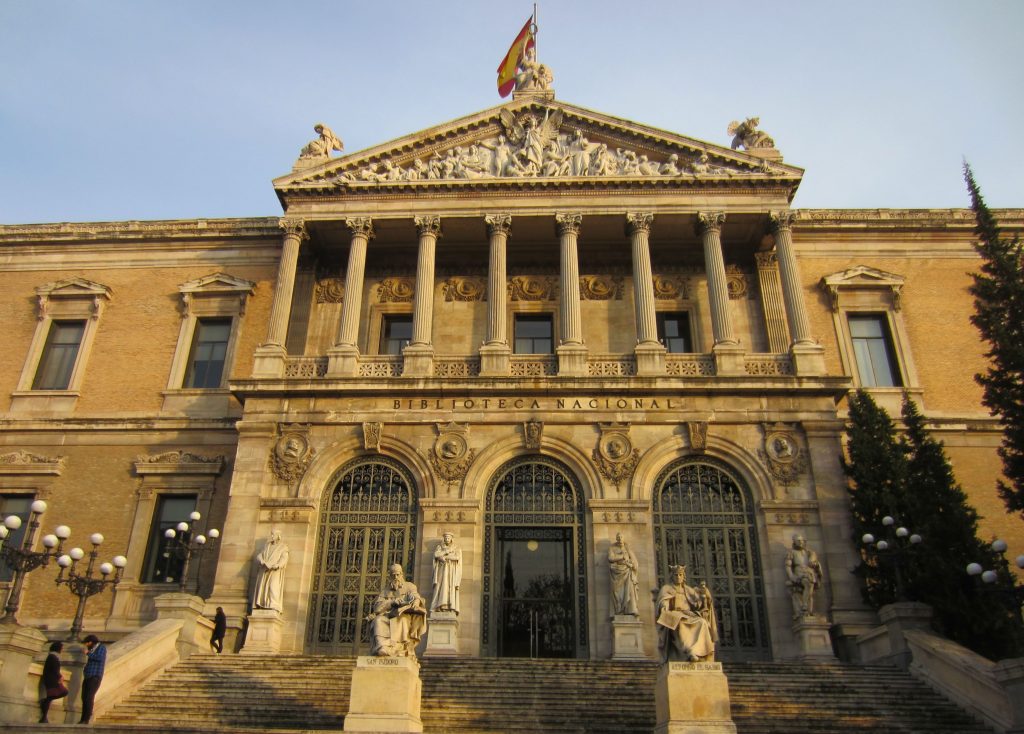 Biblioteca Nacional, just south of Plaza de Colón. I spent a lot of time there back in the day, writing fiction. With pen. On paper. What was I thinking?

The Art of the Deal — Donald Trump

I’m not following the elections directly (because honestly, having more than a year of election campaigns is absolutely insane) but I have been following Scott Adams’ comments about Trump on his blog.

Scott Adams is a pretty interesting guy himself, and while I don’t agree with everything he says, I agree with enough and respect his opinions. And he thinks that Trump could win.

Adams thinks (and I agree) that people are run much more by emotion than by reason, and that Trump is doing a good job of appealing to the emotions of the average American.

In any case, The Art of the Deal is pretty interesting. I was expecting something more step-by-step, like Roger Dawson’s book Secrets of Power Negotiating. But this is more the story of how Trump became Trump. It’s a fun look at the business of real estate (something I knew nothing about) and an interesting counterpoint to the other New York autobiographies I’ve read – Jay Z’s Decoded and Display of Power by Daymond John.

Will Trump win this thing? Who knows! At this point, he seems to be a more serious contender than I once thought.

And the book makes him seem like a much more intelligent and decent guy than the usual media portrayals do. Of course, it was probably written by Tony Schwartz more than by Trump himself, and I’m sure the understanding was that Schwartz would make Trump look good. Nobody publishes an autobiography in order to make themselves look like an asshole.

In any case, it was certainly interesting to get Trump’s perspective on things. And we’ll see where this whole election business takes us.

My favorite quote from the book: I like thinking big. I always have. To me it’s very simple: if you’re going to be thinking anyway, you might as well think big. Most people think small, because most people are afraid of success, afraid of making decisions, afraid of winning. And that gives people like me a great advantage.

(Updated: Yeah, Trump won. I was as surprised as anyone else.)

And on to the next one:

I didn’t know anything about this guy either, but it turns out he’s a Vietnamese Buddhist who worked with others to organize the peace movement during the war.

In Being Peace, he has some really interesting things to say about the need to feel compassion for both sides in an argument, or even in a war. Understanding rather than judging is the key, according to what he says in the book.

He also talks a lot about interconnectedness, and about how in his type of Buddhism, the individual is an illusion. I love the metaphor he gives about a piece of paper. The paper contains the cloud, because without the rain there would be no trees, and without the trees, no paper. The piece of paper also contains the logger who cut the tree, the man who made his saw, and the logger’s father and mother.

It’s quite an interesting point, that none of us would be able to do anything at all without the rest of humanity, without nature, without the sun and the rain and everything else.

I avoided reading Free Will for a while, because honestly, I kind of like the idea of having a free will.

But Harris is pretty convincing. (And so is my friend Anthony, who finally talked me into reading the book.)

The main argument is that there are a multitude of factors that affect our decisions – from brain chemistry to the relationship we had with our parents to our gut flora – and that we can’t really say that our decisions are “ours”.

Harris claims that our thoughts and ideas form in our heads, seemingly out of nowhere.

We can’t really control or predict them. And in that sense they’re not truly created by us.

And I more or less agree. A lot of my best ideas seemed to just pop into my head at some point, for no discernible reason. And perhaps my brain chemistry, socialization, and other factors I had little to do with make me the kind of guy who actually acts on his good ideas, rather than sitting around.

In any case, Harris believes in determinism, which in some cases can be the stupidest goddamn idea in the universe.

His definition, though, makes it clear that determinism doesn’t mean you should sit around waiting for things to happen. You should still do your best. Because in the end, sitting around and waiting is a choice in itself, with its own consequences.

Determinism is not the same as fatalism.

So in the end, does it really matter if he’s right?

I don’t think so. It seems like the whole thing is another faith-based argument that’s impossible to prove one way or another.

But it certainly has been interesting to go through the mental exercise of replaying some of the ugliest moments of my life, while imagining that nobody involved had any sort of free will. If it’s all just brain chemistry and randomly firing synapses, maybe some misbehaving gut flora, is there any point in thinking somebody is a jerk?

One of my favorite quotes: There are scientific, ethical, and practical truths appropriate to every occasion – and an injunction like “Just gouge the bastard’s eyes” surely has its place. There is no contradiction here. Our interests in life are not always served by viewing people and things as collections of atoms – but this doesn’t negate the truth or utility of physics.

So yeah. Free will is a useful concept. And whether it’s “true” or not is usually not important.

Any recommendations for new books I should read? Hit me up in the comments!

P.S. Due to a debate I was involved in online, I’ve ordered a copy of Dan Kennedy’s book No BS Price Strategy. And soon, I plan to write an article about what an English class is actually worth. So stay tuned for that. In the meantime, here’s another popular article this week: The English Chronicles: How to teach beach and bitch.

P.P.S. All those are Amazon.es affiliate links, which means I might get several cents if you buy one of those books. Who said blogging wasn’t a highly-lucrative career choice?

P.P.P.S. See also the best books about writing if you’re into that sort of thing.