Good to see you again!

In case you were wondering what I’ve been up to, I’ve got a two-parter today. Part one, a podcast. And in part two, I triumphantly come out of the closet.

It’s time I admitted it to everyone.

So here’s part one…

The handsome and exotically-accented Sven from the expat blog Adventure Gran Canaria has recently interviewed me (or more accurately my hard-working alter ego Mr Daniel) about coming to Spain, integration, the Spanish language, my favorite books, etc.

If you have 37 minutes, give it a listen!

I think it’s a pretty good interview. And, unusually, I express several honest opinions about Spanish life. I normally try to avoid certain questions, because Spanish people get really touchy if a guiri says anything negative about their country.

So, here you go… our very own Mr Daniel, on the Adventure Gran Canaria podcast:

Ok. We’re back. I hope you enjoyed that.

Now that Mr Daniel is a professional blogger, you’ll probably be seeing more interviews around here. He was already on a couple of other podcasts way back in 2015: Real Fast Spanish with Andrew Barr and Magnetic Memory Method with Dr Anthony Metivier… twice!

If you think I’m totally wrong about everything, drop me a line! I’ll probably agree with you, at least on some level. I make no claims to having any sort of monopoly on “reality”.

And on to part two…

Finally, I’m out of the closet as a lumbersexual

In other news, a friend has recently pointed out to me that I am, in fact, a Lumbersexual. Another friend backed her up.

Since I never hear about anything over here until (long after) it stops being cool, I had no idea that such a thing even existed.

But after doing my due diligence, I can say, “Hell, why not?”

I’m not nearly as beefy as the guy at the top of the Gawker article aptly entitled Are you a lumbersexual?(This might be the first time I’ve actually read an article on Gawker, incidentally.) 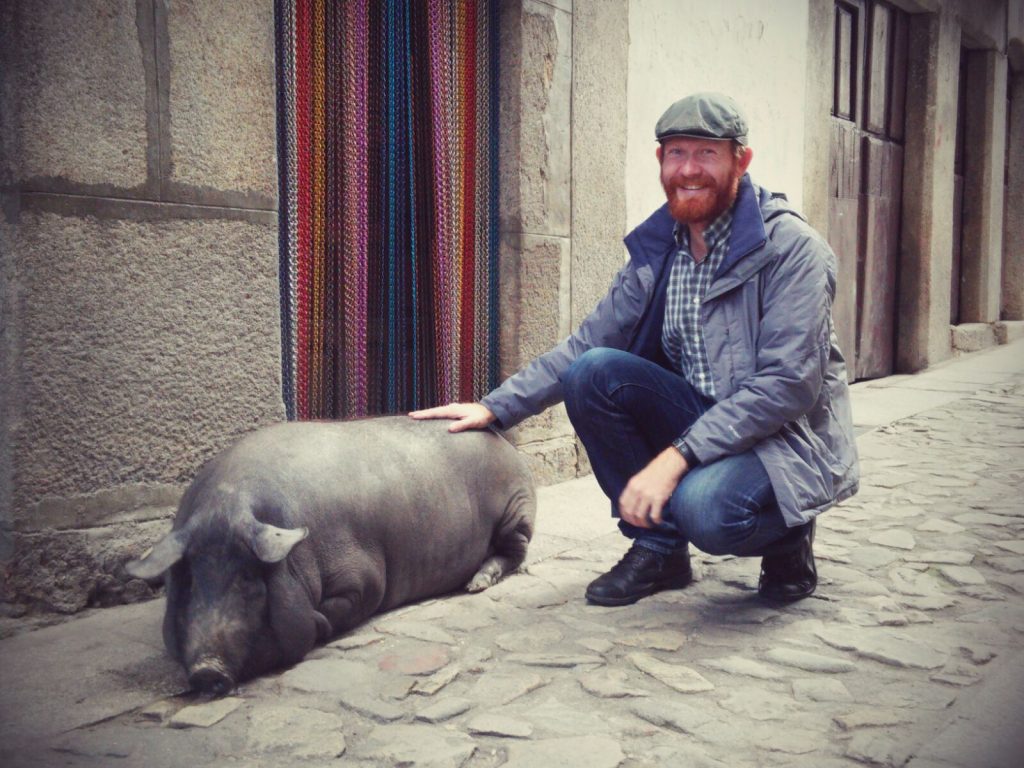 Getting outdoorsy with el cerdo de San Antón in Mogarraz, a very beautiful, very small town in the Salamanca province.

But I do wear a lot of rugged outdoorsy-type clothes. I drink straight whisky. I own one checkered shirt. I don’t mind getting dirty or wet. (Depends on the company, of course.) And I agree that spending too much time in front of the mirror is… well, best left to the ladies.

Finally, I just about bust my scrotum laughing at the phrase he of the the calculated look of “ruggedness” and hetero-normative “manliness”.

(I should mention that some guy at Time said in his article about lumbersexuality that scrotum jokes aren’t funny. Unless you’re some sort of rugged, manly heteronormative holdout from the 20th century.)

All of this sort of begs the question: what world are people actually living in back in the US?

I find it hard to care about almost any pop culture or fashion trend… and I guess we can add this one to the list.

Time to move on with my life, secure in this new knowledge.

Know thyself, as the Greeks said.  And don’t bother locking up your wives and daughters. With my massive lumberjack axe, I can break down the door and drag them away to my man cave either way.

P.S. Coming “soon” – an article about the writing process and the questions that being a professional writer and blogger brings up. In the mean time, read Gloria’s. She’s brilliant: 6 discoveries after 6 months as a full-time travel blogger.

P.P.S. OK, remember that article I said was coming soon? Here it is: the 5 big questions I’ve been asking myself singe becoming a professional blogger.

P.P.P.S. You can also check out my adventures in Tenerife, if you’re into the Canary Islands in general. Or hey, why not my new article about sex in Spain?