I haven’t been around much lately. You know. Mr Chorizo’s been doing stuff, and so has Mr Daniel. And anyway, how am I going to top my last post, 32 Reasons Why I Love Spain?

That one really took the Chorizo Chronicles to a new level–now, this little part of the internet’s backwater has been seen by tens of thousands. And it’s all because I sat down and wrote my best attempt at a viral list post.

I was surprised at the response it got. Actually, the best feedback was from multiple Spaniards living abroad who said they started crying from the homesickness and nostalgia they felt while reading it. Wow.

Anyway, a lot of other stuff has happened since then. I went to Holland to do a certification in Progressive Calisthenics, and I celebrated my 11th anniversary here in Spain down in Sevilla. In a couple of days I’m off to new adventures in Ireland. 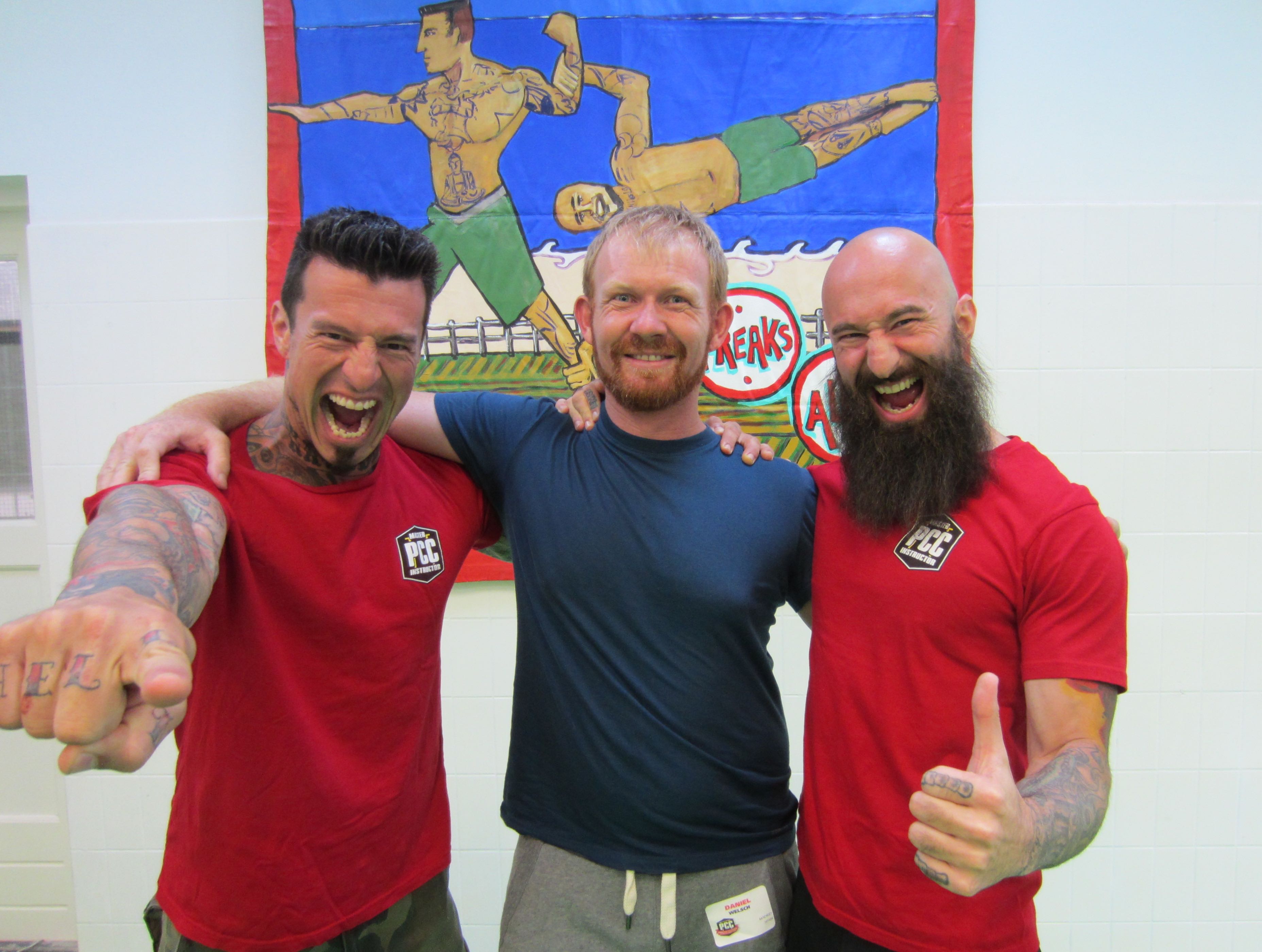 These two photogenic fellows are the Kavadlo brothers, Danny on the left and Al on the right. The guy in the center got his ass kicked by some real calisthenics ninjas for three whole days–it was great!

All in all, this year has been really amazing. Beyond all expectations. Wonderful. Heartbreaking. And a little weird, too.

So now what? Well, today I’m going to tell you about…

One thing I’ve been trying to do recently is read more books. As many people have pointed out, reading more is mostly a matter of making time to read more.

A lot of what I read is kind of nerdy or embarrassing. Some of it is less so. Here are a few of the more interesting things I’ve been reading recently:

Captive in the Dark — CJ Roberts

This is part of an effort to become a better writer by reading what people actually do read, not what they probably should read. As a recovering literature snob, it’s a bit entertaining to see what exactly goes on in these “popular” books.

This one, specifically, is free on Kindle, and has more than a thousand reviews! And many many more than that on Goodreads. Take that, Marcel Proust!

So here’s the thing. I thought I knew what I was getting into with “dark romance” and to an extent I did. But damn, this one was shocking in a couple of ways, too.

Here’s the plot: An innocent beautiful young girl is captured by an evil, heatless (yet incredibly handsome) mafioso. His job, apparently is to train her as a “pleasure slave” for later sale to a Russian billionaire. He locks her in a dark room and beats her, forces her to call him Master. Etc.

But the girl, with her feisty Californian attitude and beautiful tits, starts to get into his head. Soon he’s not sure what’s what–he loves her, but his duty is to the mafia boss and he can’t fall in love with a pleasure slave. At the same time, she’s developing some complicated feelings for him, and, um… Well, the book ends at a moment of tension that would hypothetically make some want to buy the rest of the trilogy.

Yeah, it’s a trilogy. Isn’t everything these days?

I could have basically predicted the beautiful innocent girl + tortured bad boy = complicated feelings formula before reading it. The interesting thing for me is how much whipping can go on in something like this. I guess it’s erotica, but honestly it was about 90% whipping and psychology, and 10% sex. I was surprised. Also, sensory descriptions of absolutely everything.

I’m obviously not the target market for these things, but I can see why people get into it. It pushes the right buttons.

Now, on to something a bit different…

I actually read 6 or 7 of the novels in this Travis McGee series during the summer. I had heard they’re addictive, and basically, yeah, they are.

Travis McGee is large, handsome, tanned and lazy. He lives on a houseboat in Florida, and occasionally goes off and retrieves money or other valuables that have been stolen. He keeps half, which allows him to live for extended periods without working. He’s not exactly a detective, just a guy who finds things and gets them back.

There’s a sort of formula these books follow, too, but with significant variation from one to the other. For one, it’s usually a beautiful woman who’s lost something valuable, and Trav reluctantly agrees to go get it back. Often he doesn’t realize how beautiful the damsel-in-distress is until later. If Trav starts having actual feelings for her, she’s certain to be killed at the end of the book. Which leaves him back at square one, brokenhearted on his boat, with a gin in his hand, waiting to run out of money. (I can identify with everything except the boat.)

Prepare yourself for a lot of boating vocabulary, long descriptions of women’s thighs straining to escape from their pants or dresses, and sex scenes that don’t apparently describe actual sex, but some sort of union of souls, or the rising and falling of waves of pleasure.

I can’t help but liking Trav, but one of the things that bothers me about him is that he’s such a sentimental monogamist. He’s always saying no to girls because the feeling isn’t there, or saying yes but then torturing himself about it afterwards. Clearly he’s a lost soul searching for love in all the wrong places.

Also, get ready for a lot of drinking. I guess it was the 70s and anywhere you went, people would offer you a drink from their fully-stocked bar. Or something. It’s made me want to stock up on bottles of liquor one way or another.

Each book contains at least a couple of jaw-droppingly good descriptions and some entertaining social commentary as well.

For example: I sat for nearly fifteen minutes. Odd-looking people came and went, tenants and clients and customers. Underside people. The ones that somehow seem to be clinging to the damp underside of reality. The ones that look as if they could truly astonish a psychiatrist or a bacteriologist.

Or this one: I awoke into suffocating heat, to barbed needles of light which went through my eyes and into my brain, to a mouth dry as sand, clotted teeth, and a headache that seemed to expand and contract my forehead with each heartbeat as though it were a red balloon a child was trying to inflate. Tequila hangover, in a gagging density of perfume, under a tin roof, on the sweat-damp sheets of a village whore.

Or this one: Astrology, health food, flag waving, bible thumping, Zen, nudism, nihilism—all of these are grotesque simplifications which small dreary people adopt in the hope of thereby finding The Answer, because the very concept that maybe there is no answer, never has been, never will be, terrifies them. All that remains for the McGee is an ironic Knighthood, a spavined steed, second class armor, a dubious lance, a bent broadsword, and the chance, now and again, to lift into a galumphing charge against capital E Evil, his brave battle oaths marred by an occasional hysterical giggle…

Etc. He compares himself to Don Quixote quite a bit, and it’s fun.

My favorite in the series was (I think) the second one, in which McGee is the victim of some evil doctor’s experiments in psychedelic drugs. It’s absolutely insane.

I’m definitely going to read the rest of these books. There are another dozen or so in the series, so I’m going to wait till I have some time and then go for it.

Recommended to me (somewhere) as being a book that both Bill Gates and Warren Buffett like a lot. It was actually pretty good. Who knew a guy could write 80 pages about a crisis in the value of the pound sterling and still make it fascinating?

The book is a series of essays from the New Yorker: one is about the initial success (decades ago) of Xerox copiers, one is about a one-day panic on the stock market, one is about the Ford Motor Company’s dismal failure with the Edsel. All surprisingly interesting, as it turns out, when they’re told in detail.

I especially enjoy knowing about technology that was, at the time, state of the art–but that now seems quaintly antique. Stock tickers, for example, play a large part in a few of the essays, and it’s interesting to know that high-level executives were already getting instant information from Wall Street, decades before the internet brought it to everyone.

Why is this book called The Carpetbaggers? No idea!

The main character is a fictionalized version of Howard Hughes (at least the young Howard Hughes) and it’s a fast-paced adventure novel that has everything you could want. Wild West adventures, beautiful women, the early days of Hollywood, businessmen struggling to be top dog in boardrooms and hotel bathrooms, and of course, lots of drinking.

This book is very long but I could barely put it down. All the main characters have an extended back-story, which is very interesting, and they’re mostly likeable despite some of their obvious flaws.

There’s one scene I thought was way too long in which the main character, Jonas, brings in an aircraft engineer to design a new type of bra specifically for his voluptuous Hollywood starlet’s impressive attributes. Ten-page descriptions of heaving bosoms are a bit much, sometimes.

But fortunately, most of the rest is sex, violence and adventure–it’s actually a lot of fun!

Apparently the author was very popular in his day (as well as being quite the playboy himself). I had heard this book was really bad yet highly entertaining, but I didn’t even find it to be bad. Just different than what I usually read.

So that’s it for today!

Have fun out there,

P.S. Got any book recommendations for me? Hit me up in the comments…