From roscón to turrón: a year in Spanish pastries

Holy Week is just around the corner, and for many, that means torrijas.

Spanish pastries might not be internationally famous, but they do offer a lot of options to those with a sweet tooth.

From roscón the first week of January to turrón and mantecados at the end of December, Spaniards have a pastry for every occasion. Each holiday seems to have its own seasonal cake or sweet, and they’re all available at your local pastelería.

In the first few days of the new year, you’ll notice the Roscón de Reyes suddenly appearing everywhere. A ring cake, often filled with whipped cream and topped with candied fruit, roscón is an essential part of the typical family’s Epiphany celebration.

There are a couple of traditions that go along with the roscón–if you’re planning on spending your holidays with a Spanish family, you might want to start taking notes now.

For one, the batter has a little plastic figurine (often of a newborn Jesus) baked into it, which is said to bring good luck to whoever finds it in their slice of cake. Another slice will contain a dry fava bean—if you find the bean in your piece, tradition says you have to buy next year’s roscón.

Spring brings Holy Week, which for a lot of people means somber processions and really creepy Klan-style hats. But if you’re more interested in getting a sugar rush than participating in religious fervor, get yourself some torrijas. 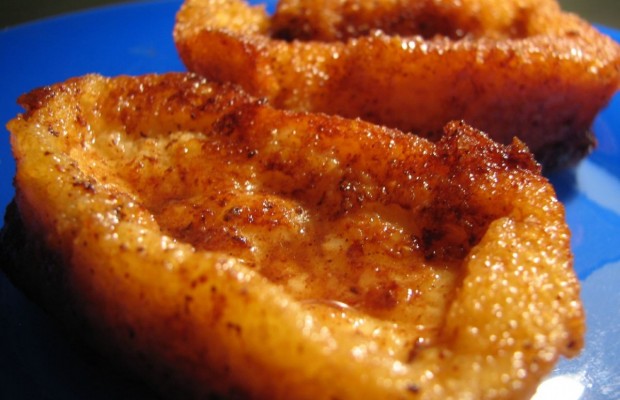 Torrijas are a classic during Holy Week. Photo by Tnarik Innael.

Whatever you do, don’t suggest to the Spaniards in your life that torrijas are just like the French Toast your mom used to make. They won’t take it too well.

And actually, torrijas are a bit different. They’re made using a special kind of bread, which you can get at your local bakery at this time of year.

The bread is cut in slices and soaked in milk for several hours, before it’s dipped in egg and fried. You can serve them with cinnamon or with a syrup made by boiling some white whine, sugar and a cinnamon stick for a few minutes.

Here’s a recipe on Spanish Sabores if you want to make your own.

San Isidro and his rosquillas

On May 15th, when Holy Week is already a distant memory, madrileños celebrate San Isidro.

Madrid’s patron Saint was a farmer who lived just across the Manzanares in the 11th and 12th centuries. Known for his piety, Isidro was happily married to a woman named María.

Legend has it that when their son fell down a well, Isidro and María prayed and prayed for God to save him. The boy was (somehow) saved, and to give thanks the two of them vowed abstinence and moved into separate houses.

Isidro eventually became a saint, and so his wife, although not officially canonized, is treated as if—you might know her today as Santa María de la Cabeza.

Back to the topic of sweets: the rosquillas you can eat around May 15th are like a very light crispy donut, and they come in three varieties: tontas, listas y Santa Claras (depending on the type of frosting they are covered in).

Over the summer months, there aren’t so many typical pastries—your neighborhood baker is probably on vacation for a month or so, and he’s certainly not getting up at 4 AM to make cakes.

You can satisfy your sweet tooth in the hottest part of the year with melón or watermelon. Some types even have a denominación de origen like good wines do.

Later in the year, we’ve got…

All Saints’ Day and Christmas and seasonal sweets

After summer ends and the weather has cooled off comes Día de Todos los Santos on November 1. Now it’s time for some buñuelos and huesitos del santo.

As the name implies, huesitos are shaped like little bones, and they’re made of marzipan and egg yolk, and come in many different flavors. Sweet potato is a traditional choice. Buñuelos are soft balls of fried dough filled with whipped cream.

And finally, at Christmas there’s the endless variety of pralines. Originally, turrón was either hard or soft. Now, you can get it in any flavor imaginable.

In the basic hard form, it’s a mix of egg whites and sugar which is cooked very slowly until it’s nearly hard. Almonds or pistachios are then added and it’s left to cool and harden fully. Give it a try! (But be sure not to break a tooth).

Honorable mention also for mantecados, which are crumbly, not so sweet, and heavy on lard.

Provincial pastries from around Spain

There’s no need to stop at seasonal snacks. If you want to dig deep into Spanish sweets, you can get all kinds of things in some other regions of the country—Tarta de Santiago in Galicia, a traditional Pastel Vasco in the Basque Country, marzipan in Toledo, and many more.

Your neighborhood bakery is probably a good place to start your journey into the world of Spanish pastries, but if you want some more suggestions check out the 7 best pastry shops in Madrid.

And if you find yourself hooked on torrijas after this Holy Week is over, you can get them all year long at la Casa de las Torrijas in Calle de la Paz, just off Puerta del Sol.

P.S: Do you have any favorite Spanish pastries or bakeries here in Madrid? Share them with us in the comments!