Hey, well, it looks like The Chorizo Chronicles has been nominated for a Liebster award by Amanda from Manders Abroad. Thanks Amanda!

I’m honored that anybody reads this stuff at all – a lot of times it’s just a sort of mental exercise for me.

A way to get things out of my head so I don’t go crazy thinking about them, and a way to practice writing in English.

Mostly I write in Spanish, which is a whole different game.

Here are the rules involved with the award:

1. Where is your favourite place?

I have a lot of favo(u)rite places, and most of them are in the mountains north of Madrid.

Some little meadows at 2000 meters, after a long walk up the sierra, where you can rest, have some water, and contemplate the panorama.

They have names on the maps, but who ever remembers them?

If I had to have a favorite place in the city, I’d choose–mmm… I don’t know. That formal garden in Parque Retiro, right next to el Casón del Buen Retiro.

Or maybe the terraza at Covent Garden, across la Castellana and sort of near my house.

I’m not a huge fan of the beach.

I love living in the city, with most of what I need within walking distance. But I also love to be able to get out of the city and go to the mountains from time to time.

3. Which TV show would you like to play a part in?

I don’t watch much TV.

I really love The Wire, though. I wrote an article about how it was invading my dreams nearly every night last summer.

Maybe I could be Jimmy McNulty’s dopey sidekick if they decided to make another season.

Or I could be one of the dopey guys who gets whacked on the Sopranos because he owes money to Tony. RIP Gandolfini!

When I was younger, I used to listen to depressing music, and then I’d lie around and be depressed.

Now I listen to a lot of rap. Mostly Jay-Z.

He raps about overcoming your obstacles, and I find him to be pretty relatable.

Of course, I’ve never had to sell drugs to get by, but I am hustling in one way or another every day to make my online business work, as well as my life abroad.

If I had to choose one, I’d say Public Service Announcement but really it could be the whole Black Album.

Che Guevara with bling on, though.

5. Where would you like to live, if you had to stay there for the rest of your life? Why?

I feel like it’s a big city without being too big, and it has access to all sorts of other beautiful places in Spain and Europe.

Only time will tell, but I’m pretty sure I’m here to stay.

I have a sort of dorky answer for this – I’d invest it semi-conservatively in a variety of dividend-paying stocks (plus maybe some Berkshire Hathaway because Warren Buffett is brilliant) and live off the money that came in every quarter from that.

Then, I’d figure out what to do with my new life without any immediate obligation to work for a living.

I have a few “great men of history” who I admire in some way, but the roles played by people even a few decades ago are so different than the roles available today that I don’t have someone I really want to emulate.

Some people I greatly admire for their chutzpah or talent include Alexander the Great, Winston Churchill, Gandhi, Steve Jobs, Joe and Dean at I Love Marketing, Tim Ferriss, the aforementioned Jay-Z, T.C. Boyle, Bill Bryson, Ernest Hemingway, and more.

But if I had to actually be one of them I think I’d be miserable. I prefer being me.

Madrid isn’t really good for either! It seems like there’s always some block of flats in the way.

But if I had to choose, I’d say sunrise. The beginning of new day, with all sorts of new possibilities.

Sunset makes me a little sad (especially in winter) with the feeling that another day is finished. I try to maximize my use of the time I’m given, so when a day is finished, well, it’s gone.

9. Do you have a favourite photo that you have taken?

Good question. I really like this one. It’s a guy unloading a truck full of grapes in El Molar. They make wine in those buildings. Go to las cuevas sometime if you have a chance. 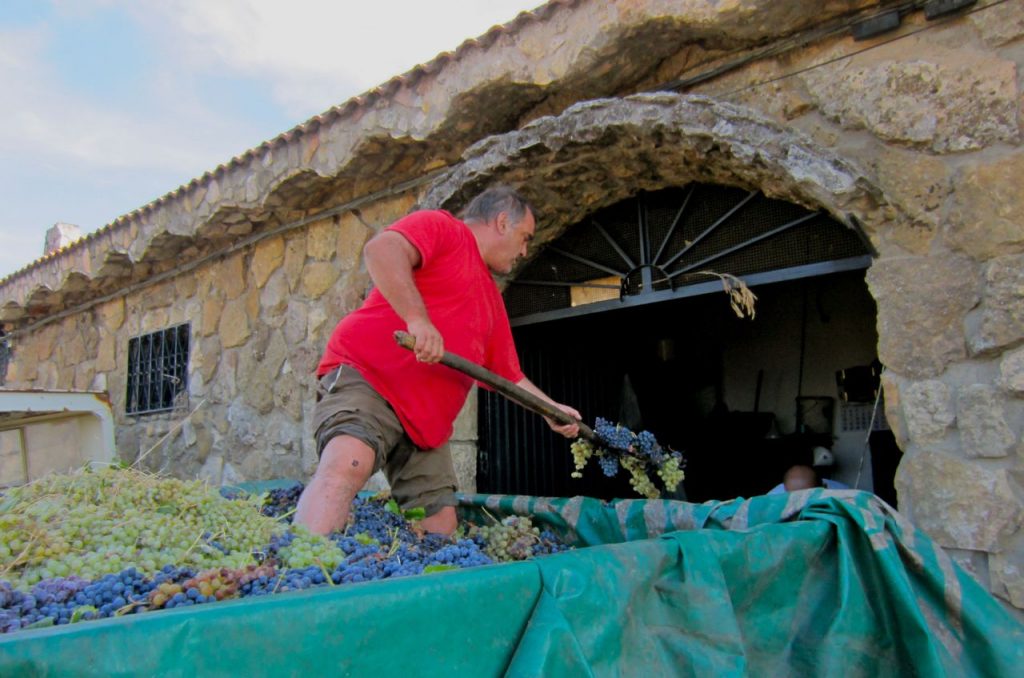 I also have several animal photos I really like.

Technically, she’s wearing a thong and something over her head. So only one of them is nude.

I’ve always been a writer and I’ve always felt I have something I need to say. Back in the day I wrote zines…

Thank god technology has progressed and I don’t have to do that anymore. Cutting and pasting and exacto-knifing and stapling. Not to mention putting them in envelopes and going to the post office… That was bullshiiiiit.

(And hopefully nobody has a copy of one of those godawful zines lying around anymore.)

Anyway, like I said at the beginning, I write this blog mostly to get things out of my head, and to practice writing in English.

Also, I take the opportunity to be a bit less serious than I am in my other writing. I also have a couple of for-profit blogs here and here where I use a more serious tone.

OK, so I nominate Gee Cassandra, Mapping the Peace, and Stacey from La Guiri Habla. I don’t exactly know how many followers they have, or if they’ve already done this, but anyway…

My ten questions are, in no logical order whatsoever, the following:

1. What are a few of your favorite Spanish foods?

2. What’s your writing / blogging process like? Do you have a schedule or routine?

4. What do you find shocking or strange about living in Madrid?

5. What’s your favorite thing about living in Madrid?

6. Where do you see yourself in a couple of years? If your plans don’t reach that far, what about this time next year?

7. If you had to stop blogging, what would you do instead as a creative outlet?

8. What’s your favorite place that you’ve been to?

9. If you were leaving Spain forever tomorrow, how would you like to spend today?

Thanks for your time, I’m looking forward to hearing your responses!