Well, I’m back from Amsterdam!

Didn’t even notice I was gone?

That’s what happens when you’re at the bottom of the blogosphere.

You can go on vacation and nobody worries. “Where’s Mr Chorizo?” thought my two or three fans. The rest didn’t even know anything was missing.

In any case, here I am. Back from Brussels, Brugge and Amsterdam.

Adventures in the north of Europe

Brussels was nice, and Brugge was literally the most beautiful city I’ve ever been to. Up till this week, the title was held by Assisi, home of Saint Francis. Now, it’s Brugge. (Don’t even ask me about Venice. Totally overrated, in my opinion.)

Anyway, today I’m going to talk about Amsterdam. It’s a very cute city, in a flat little country in the north of Europe. It’s full of canals and the Amstel river goes through it to meet the sea. Yeah, Amstel, like the beer. Who knew?

Talking about beer, my first 20 minutes in Amsterdam I couldn’t help but being kind of a dick. I went to a steakhouse to have lunch, and when I asked the waiter about the selection of beers, he recommended Heineken.

“Psh!” I said. “Do you have any better beers?” I had never really thought about it, but it turns out that the boring (but exceptionally well-marketed) Heineken is from the Netherlands.

Darkness and the red light district

Of course, it was the middle of winter, and I was in the north of Europe, where it gets dark at about 4 PM. Luckily, walking around in the cold is so exhausting that you’re ready to collapse in bed by 7. Then you can wake up several hours before sunrise and do the same thing again the next day.

At one point, wandering around the center without a map, I passed through the red light district–it was about two in the afternoon, and there was some big Chinese fireworks-and-drumming thing going on a couple streets over. I really don’t know, it was noisy, and I wanted to check it out. Following the noise, I came across the meat market.

It was just as people had described to me–girls sitting in little boxes in the shop windows. Wearing lingerie and platform stilettos, smoking cigarettes and smiling at passers-by. Kind of weird. I had contemplated wandering through at night, but after what I saw during the day I decided I wasn’t that interested.

Anyway, I can hear what you’re thinking. You’re thinking, “But Mr Chorizo, no trip to Amsterdam would be complete without stopping at a food stall for some raw herring and peppered mackerel! Did you partake? What was the experience like?”

Well, yes, thank you for asking. I partook. The herring was okay. Actually, I was expecting pickled herring… Biting into a hot-dog bun full of raw fish on a cold day in January is, well, an experience you’ll probably only have in Amsterdam. The mackerel was better. Peppery. 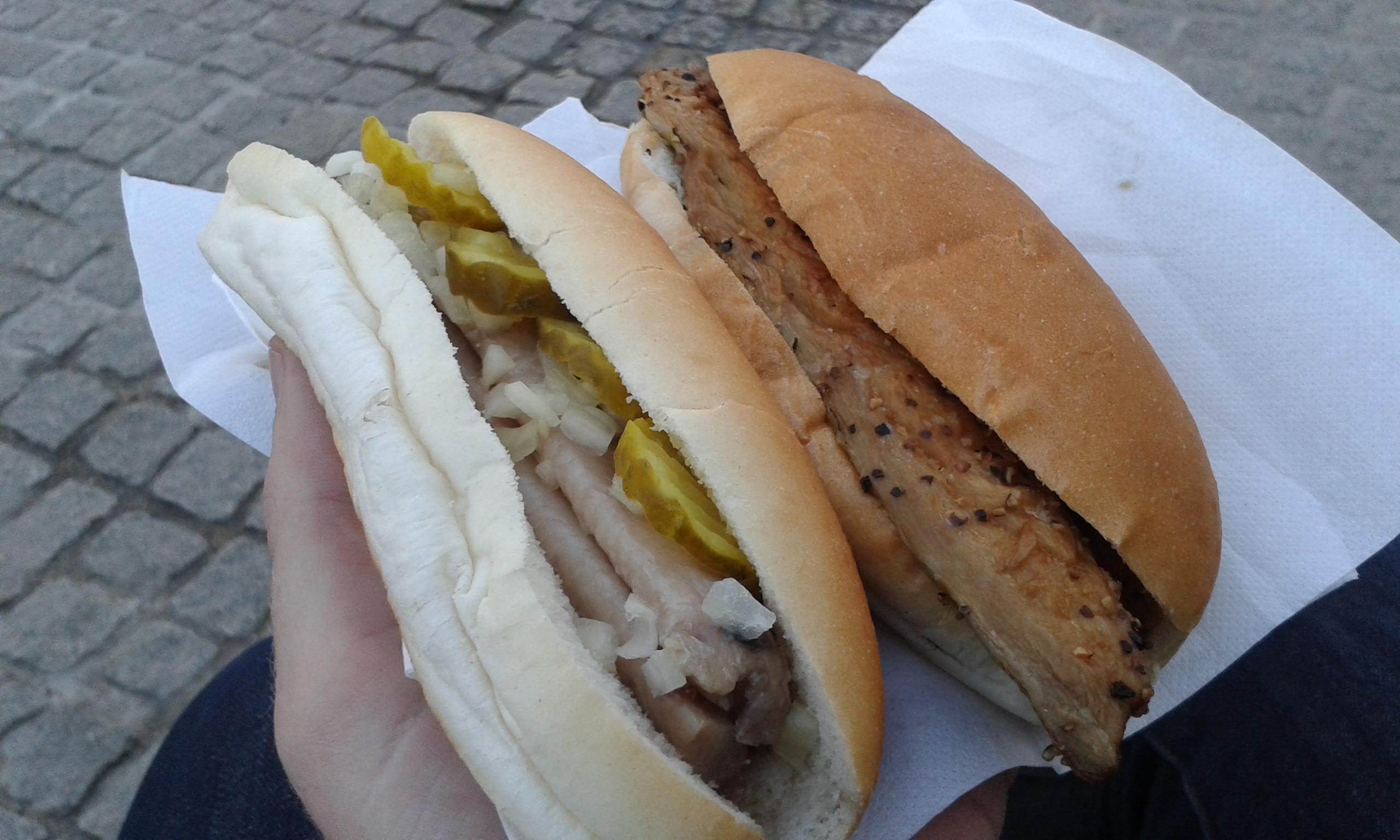 I also went to a typical Dutch restaurant for a hot, steamy plate of stamppot.

Strangely, it was exactly like something my dad used to eat when I was a kid. Smoked sausage, mashed potatoes and sauerkraut.

It took about twenty-five years for this sort of thing to grow on me, but this stamppot was really fantastic. Strangely, there aren’t too many typical Dutch restaurants in Amsterdam. People explained to me that you can make your typical Dutch food at home, so for the most part, people go out to eat more complicated foreign things.

The city center was really busy with tourists of all nationalities, and I can’t say I liked it too much. But a friend recommended a neighborhood called Jordaan, which was fantastic. All the little canals with the houseboats moored along the edges, bicycles whizzing by, and cute shops and cafés. There I found a street market, where they were selling tulip bulbs, among other things. 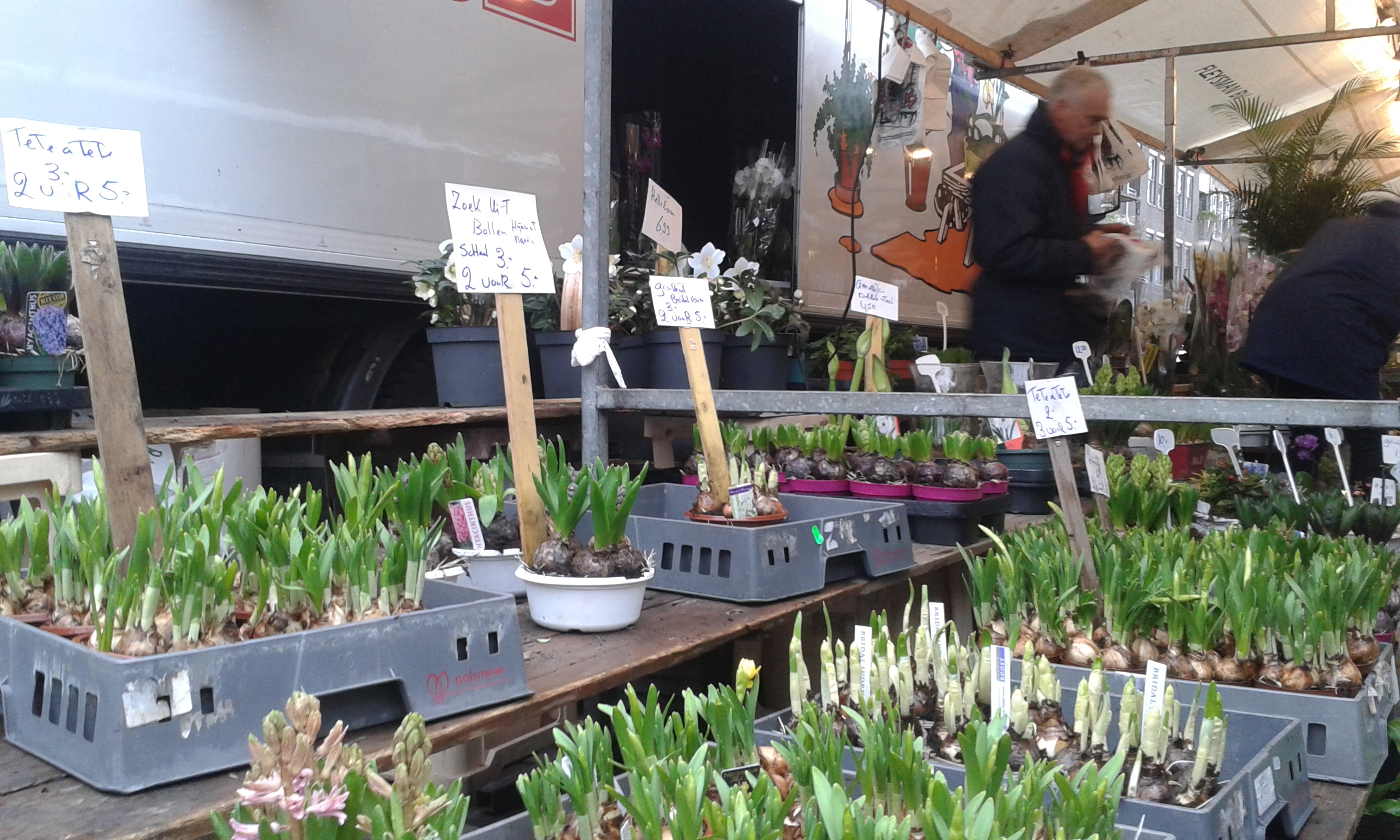 Tulip bulbs in a street market.

Of course, Amsterdam is also famous for it’s liberal attitude towards recreational drugs (a topic about which I have no further comment). For an indication, check out this announcement from the Public Health Service, which was all over the city: 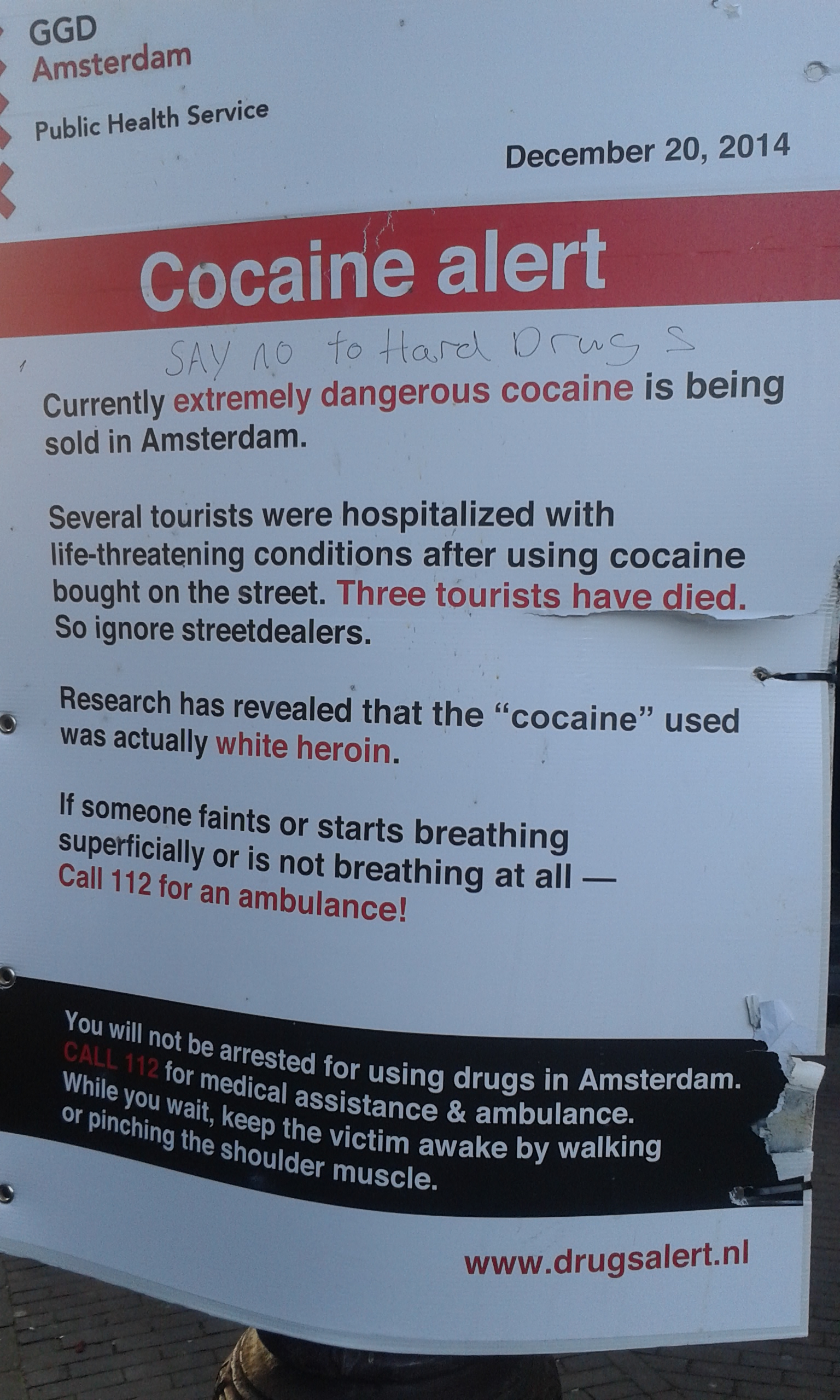 Cocaine alert: it’s cool to use drugs in Amsterdam, just be careful about where you get them.

There were also big LED billboards all over, explaining the same: “White heroin being sold as cocaine. Tourists in hospital. Three have died. Ignore street dealers.”

One surprising thing for me was the feeling of nervousness I had after almost being run over by a few bicycles, motorcycles and trams.

It took me a while to get used to the way the streets worked, and the fact that you could have a bicycle barrelling down on you at any time from any direction. Eventually I just started looking over my shoulder at all times, and it was fine. 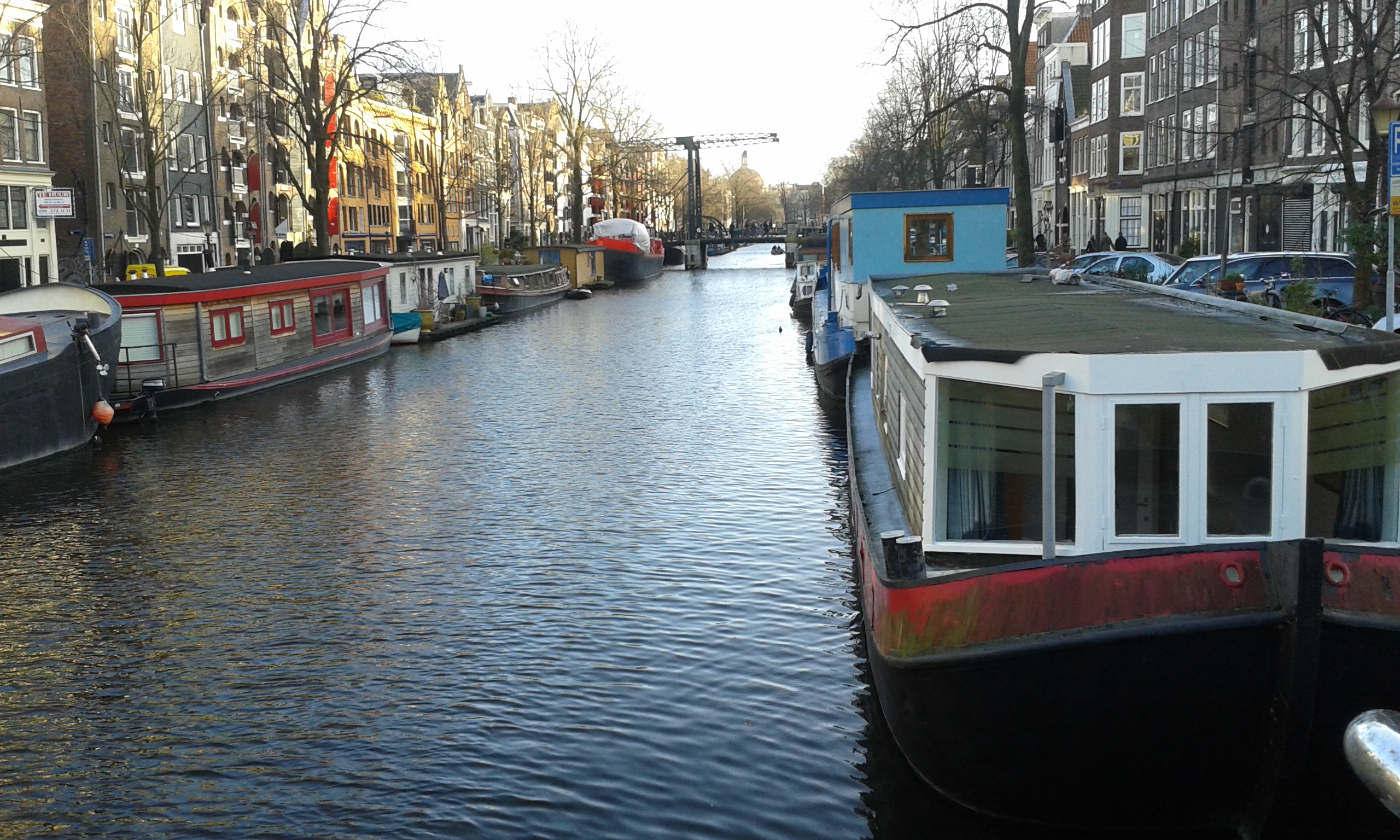 Houseboats on some random canal in Amsterdam.

Another cute thing were the canals with all the houseboats. Some of the houseboats even had little floating gardens–I assume people don’t have to pay much rent for such a thing, maybe just a tax for boat parking. In any case, it’s pretty original.

But for me, as a language geek, the most amazing thing was the level of English. Everybody and I mean everybody who I spoke to knew English. Cashiers, waiters, girls working in bakeries, taxi drivers, everybody.

At one point, I caught the tram on a busy square and the driver (of Asian ancestry) told us, “Come on, squeeze in! Squeeze in!” That extremely high level of phrasal verb usage is only achieved in Spain by the few people who have read my books about the subject.

The other thing was the politeness–it’s something you just learn not to expect here in Madrid. I’ve become kind of an asshole myself, with time.

That’s just what Madrid does to people.

But spending a few days with cute girls (who had even cuter Dutch accents) saying, Thank you very much sir. Here’s your coffee, sir. How can I help you, sir? and such things has been quite good for my ego in ways I could never have expected… Did I mention how cute things sound with a Dutch accent? Yeah, totally. Wow.

So now that I’m back, my expectations for Europe have gone up. The north, for me, was far better than I had expected. I had heard a lot of good things, so I thought it would be difficult, but it was even better than the hype. All in all, a great experience.

Now, back to reality. Here in Madrid, life goes on.

I’m out. Till next time,