Tomorrow is San Martin. The 11th of November. The traditional day for the slaughter of pigs all around the Mediterranean. There’s an expression about it in Spanish: a cada cerdo le llega su San Martín.

“A cada cerdo le llega su San Martín” means that assholes will get what’s coming to them. Once again, Spanish proverbs are better. And so are Spanish obscenities.

What’s up with pigs and San Martín?

The traditional thing for San Martín (which they still do in the small towns) is to slaughter a pig and spend the day drinking wine and making all the different pork products: bacon, cured ham, sausage (fresh and cured) and black pudding–otherwise known as blood sausage.

You can eat literally any part of the pig. The ear (it’s awesome), the hooves, the snout. A couple of weeks ago I made lentils with a pig’s tail for extra flavor. 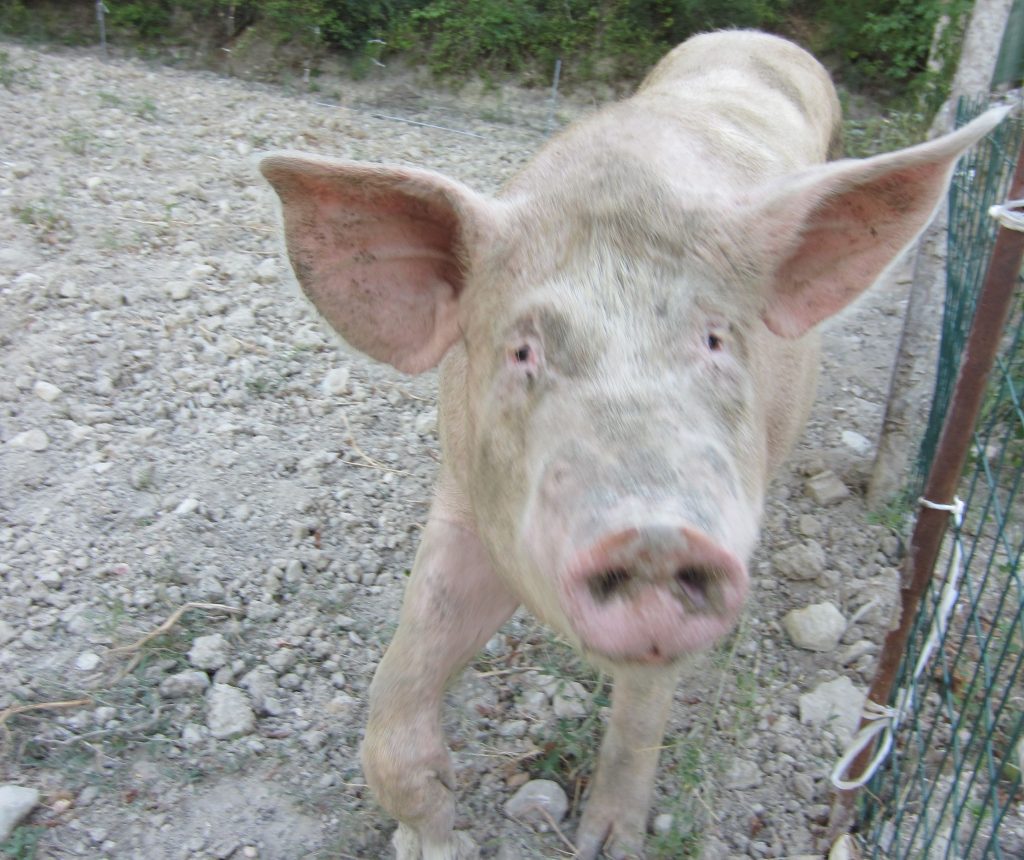 I’m pretty sure I know this guy. The beady little eyes and ruddy complexion. Photo by me.

I’m hoping to go to one of these someday, because it seems like a great way to be in touch with what you’re eating.

Food doesn’t grow on supermarket shelves. Check out this eviscerated rabbit, for example. Or these sandwiches, which have tentacles. Or the view of my local casquería, where you can get all the organs you want, super cheap.

In any case, I have nothing against pigs. I named my blog in honor of my favorite pork product. And I actually like animals. Take a look, this website is just full of photos of animals from everywhere I go.

I like animals, in fact, more than I like some people. Especially some people, pigs in disguise, who are occasional parts of my life.

The Dalai Lama would tell us that our enemies are a gift, because they teach us patience. Well, I’m not the Dala Lama.

Have fun, everybody… Or, you know, “Eat, drink, play, for tomorrow we may die.”

P.S, It’s not just San Martín tomorrow, it’s also Armistice Day. The end of World War I. As soon as I have time, I’ll be listening to the Hardcore History series about WWI, but we’re talking 3 to 4 hours per episode here. Great podcast, in any case.

P.P.S.  Totally off-topic here, but I kind of owe an apology to the Spanish about Ebola – they actually cured the infected nurse. She’s fine, and out of the hospital! Well, maybe cured isn’t the word. But in any case, she’s over it. And we haven’t had any other cases. So I guess my preparations for the zombie apocalypse were a bit premature. Congratulations to Spanish medicine, and especially to Ms Romero. I imagine that getting over Ebola gives you a whole new outlook. Lemme think about that, next time I’m considering making blood sausage out of certain people in my life.