As Ebola Virus Spreads, Madrid Prepares for the Zombie Apocalypse

The ebola virus has spread to Spain.

We all remember back in August when Miguel Pajares, a Spanish missionary, was brought from Africa to die in a hospital in Madrid.

I saw the reports on TV and it was quite obvious that the Spaniards were putting on a show. The whole caravan of ambulances, the 27 police cars, 54 motorbikes and the helicopters escorting this guy to the hospital, the whole quarantine and the glass box they had him in just screamed “Look, we’re a real serious country, we’re totally competent and this is never going to be a problem for anyone.”

In other words, “We’re the authorities. Just trust us.”

Well, due a long series of errors, the Ebola Virus is now here in Madrid. It was passed, somehow, to a nurse who worked with Pajares and later with Manuel García Viejo (another missionary who also died in Hospital Carlos III a few weeks later).

After Garcia Viejo died, they sent her on vacation, telling her to keep track of her temperature. She did, but the funny thing is that even when she got sick, nobody was worried. They gave her paracetamol and sent her home. 10 days later, she was diagnosed with ebola. You can see the whole cute infographic here–Spanish Incompetence: the Saga Continues.

So now we’re dealing with the first native case of Ebola in Europe. Humble public servant that I am, I feel the need to make a list of guidelines for how to avoid infection and survive the upcoming zombie apocalypse. So with no further ado:

How to Avoid Being Infected with Ebola

1. Avoid the semen of ebola survivors.

Yes, that’s right. If you’re going on a first date, to a swingers party, to a “sauna bar” on La Castellana or to another social event where you feel you might come into contact with large quantities of semen, be sure to ask the gentleman (gentlemen?) in question if they have recently survived the ebola virus. The virus can still be found in the ejaculate of male survivors for a couple of months after recovery.

Now is not the time to be having sex with other non-human primates. If that’s your thing, whatevs, it’s cool. I’m not judging you. But not this month. Actually, maybe it’s better to wait till after Christmas. Also, if you find some half-chewed fruit on the ground, do not I repeat DO NOT pick it up and eat it. It may have been dropped by an ebola-carrying bat.

3. Do not handle cadavers or eat bushmeat.

If someone invites you to go down by the river to poke a dead body with a stick, politely refuse. It’s also recommendable to avoid eating wild African animals AKA bushmeat. Brush-tailed porcupine? No thanks! Smoked lemur? Maybe another time! I don’t care how cool it is to “get down” with other cultures and cuisines… We’re talking about ebola here! (I’m looking at you, bohemians in Lavapiés.)

4. If someone is currently dying of ebola, now is not the time to start a romantic relationship with them.

I know it might sound poetic, sitting in the hospital and wiping the brow of your beloved, but that path will only lead to heartbreak and a possible infection of your own. But fear not! With modern medical technology (read: no treatment exists) chances of survival are between 10 and 50 per cent! Just be careful about semen for a couple months afterwards. (Maybe you’d better go back and re-read point 1.) 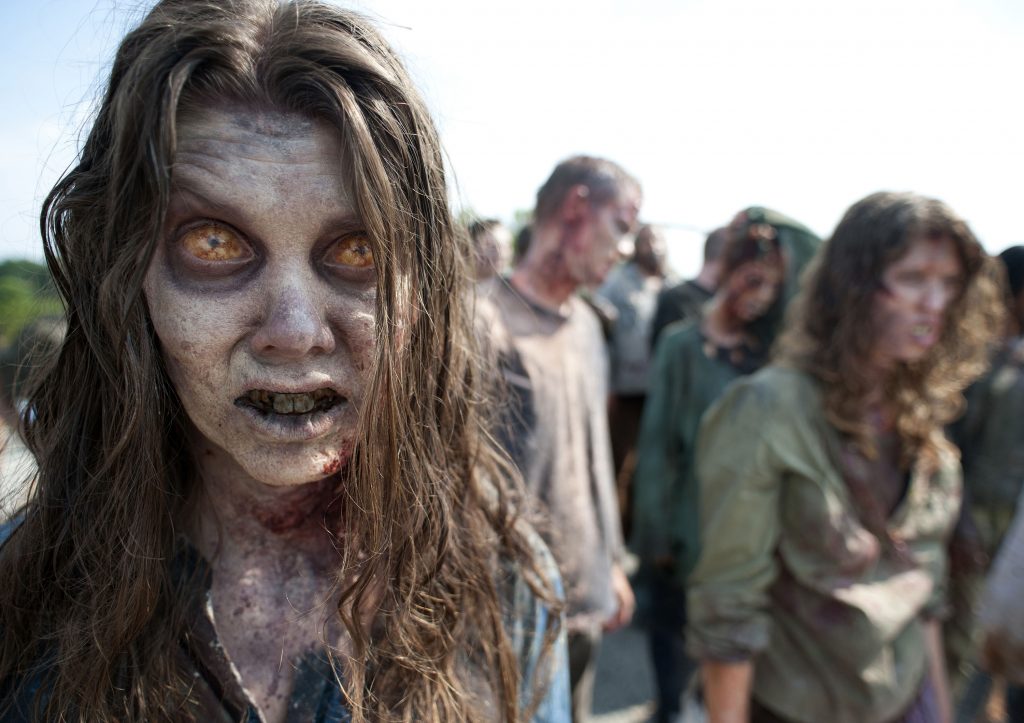 The zombies are coming. I’m pretty sure that’s Ana Botella there on the left.

Of course, this new story raises more questions than it answers:

1. How many people swapped bodily fluids with the infected nurse before she went to the hospital?

What if she and her husband are swingers, and spent their summer vacation swapping fluids with half the population of Benidorm? Is nothing sacred?

Why did this have to happen, in Spain of all places? It really is a great country, where things work pretty well most of the time… Why did they have to fuck up with the motherfucking EBOLA VIRUS??? OH GOD WHY???

3. Will the new breed of Ebola Zombies make peace with the old-school Opus Dei Zombies?

For those who don’t know, Opus Dei Zombies have secretly been running the whole country for decades, wearing their Pedro de Hierro shirts and staring off into the middle distance with dead eyes, lamenting their lack of braaaaaiinnnnssss.

The question now is whether there will be a zombie détente or whether we will be caught in the crossfire of a war between opposing factions of the walking undead.

4. How is one supposed to defend himself from a zombie apocalypse in a country where virtually nobody owns a gun?

Shall I just stand at the door, kitchen knife in hand, and hurl insults at them? Strict gun control is all well and good most of the time… But what about zombies?

Perhaps, now that the containment protocol has failed, it’s finally time to activate the shotgun-distribution protocol.

So I guess that’s it.

Here we are, hoping for the best, preparing for the worst, and waiting for Ana Botella to start handing out shotguns.

Or turn into a zombie.

It’s been nice knowing you all.

If you turn zombie and I have to kill you, just remember…

P.S. Please, dear reader, don’t get offended by my use of the expression “Spanish incompetence.” Some of my best (Spanish) students have told me that they feel the same way about this whole debacle. And anyway, as a proud member of the guirisphere, it’s not my job to kiss everyone’s ass about how great flamenco music is or to limit myself to making lists of cool rooftop bars.

P.P.S. I could have also called it la gran chapuza nacional. Anyway, hopefully in a few weeks we can forget about this whole thing, and go back to life as usual–massive unemployment, political corruption, and getting fucked by the EU. It would be a shame to spend all autumn without semen.

P.P.P.S. I promise I haven’t had ebola recently. Want to come over for dinner? Let me know in the comments!