GR Footpaths in Spain: Walking Tours of the Iberian Peninsula

Here’s some info about the GR footpaths in Spain.

I’m a big walker, so any time I’m out and about and I see the characteristic yellow arrow for the Camino de Santiago, I’m suddenly as excited as a schoolgirl on a pony ride.

There are a lot of different ways to do the pilgrimage to Santiago: the typical one is from Roncesvalles on the French border, but there’s another one that closely follows the north coast, one that goes up from Lisbon, and even one that starts here in Madrid, at the Iglesia de Santiago, just next to the Royal palace.

From there it goes through El Pardo, Tres Cantos, Colmenar Viejo, Manzanares el Real, Cercedilla and finally on to Segovia. Eventually it joins the Camino Francés in Sahagún and from there follows the more widely-travelled route.

I think that even if you wanted to start the Way of Saint James (not a big fan of that translation, incidentally) in Rome or Jerusalem you could. Set aside a couple of months for something like that. In the Middle Ages, you could start anywhere in Europe. I’m not sure what the state of all those routes is today, but check the map here. 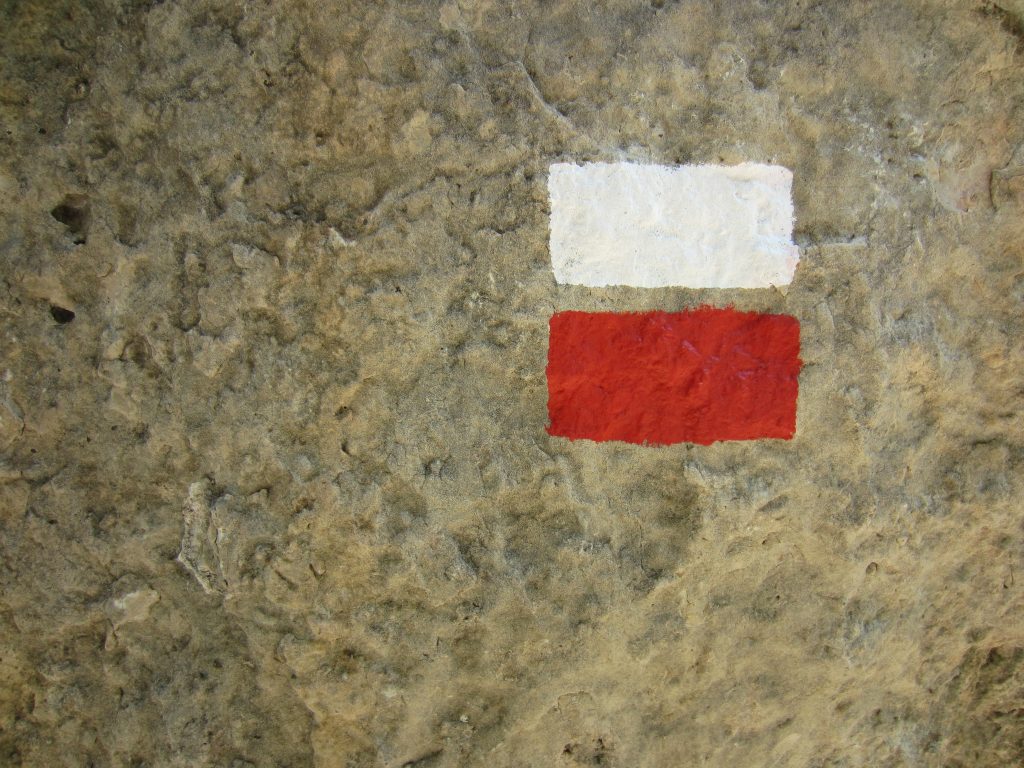 The marking that indicates you’re on the right path.

However, here’s something a lot of people don’t know. In addition to the Camino, there’s a whole network of Gran Recorrido footpaths that allow you to walk all across France, Spain, and other European countries. Marked with a series of red and white symbols to indicate which path to take and which not to take, you can follow them basically anywhere.

The GR footpaths are generally more than a couple days’ walk. Some of them would probably take a month or more. And there are a lot of Pequeño Recorrido (PR) footpaths also, which are only a day or two. The markings on those are white and yellow.

This summer I had the opportunity to do a few parts of the GR-10 (which connects Valencia with Lisbon, passing through Madrid) and the GR-66 which crosses the province of Cuenca.

The routes aren’t always very obvious. Sometimes the markings are old, faded or non-existent, or sometimes I probably miss them. That’s where a good map comes in.

For maps, you can try the Tienda Verde, or (my personal favorite) the official map store of the Instituto de Geografía Nacional. It’s only open in the mornings, but they have the official Spanish 1:25,000 map of anything on the Iberian Peninsula – including all the GR footpaths in Spain, and they only cost about 4 euros each.

Their website absolutely sucks – in true Spanish fashion – so in order to save you the hassle, the address is General Ibañez de Íbero, 3. It’s close to Ríos Rosas or Cuatro Caminos.

If you’re going to do one of the GR Footpaths, of course, the usual precautions apply. Bring lots of water. However much water you think you’ll need, bring twice that much. Take a map, know where you’re going, and don’t be stupid.

There are a lot of places out there where you’re not going to be very close to civilization, and nature is totally indifferent to whether you live or die.

Most of all, have fun.

P.S. If donkeys aren’t your thing, then check out Venus O’Hara – she surely is. Plus, I bet she smells a lot nicer. Also, has anybody done one of these routes? How was it? Hit me up in the comments, right here.