As Baby Boomers Near Death, Inane Blathering about Millennials Increases

On a recent morning in Minneapolis, Tom Dickington was approached by one of his young employees. Dickington, 63, who manages a local Foot Locker, says, “The kid said he was tired of standing by the door and greeting people for 8 dollars an hour, and he wanted to know if there was something else he could do.”

“The nerve of these kids!” continued Dickington. “Why, when I was his age, we worked 11-hour days for a nickel, and we were happy just to have the job!”

Tom Dickington died of heart disease soon after the interview, but his worries about Millennials are as relevant as ever.

Millennials ruin everything around me…

Millennials, as young people aged about 20 to 32 are known, are clearly ruining America. In a growing trend, they are rejecting mindless minimum-wage work and searching for “fulfilment” and “something they actually enjoy”.

“I don’t see why they can’t just swallow their misery and resign themselves to a life of quiet desperation,” said Ohio financial advisor Hank Gullywhacker. “That’s just what people do. Work hard and secretly hate their lives, until they can retire and wait for death.”

Gullywhacker, who grew up in the 60s, says that back then everything was different.

“We all sat obediently in class, hair parted neatly on one side, respecting our teachers and never questioning our parents’ authority,” he says. “I mean, it was the 60s! Okay, okay, maybe I took one toke on one joint back in 1969. But that was it.”

Breaking news from the dying media

Even the slowly-dying old media has noticed that Millennials don’t necessarily share the values of their parents and grandparents.

In this aricle in  Forbes, Susan Adams writes about Millennials’ difficulties in finding jobs due to their incompetence, sense of entitlement, and “lack of generational deference”.

Adams, who, from her staff photo, looks like she enjoys taking time off from journalism to push a shopping cart full of cats around under a highway bridge, is clearly right to be fed up with anyone a couple decades younger than her. 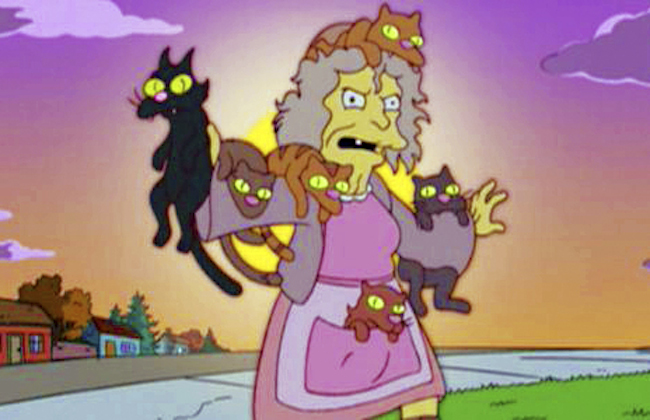 Have no fear, America. Crazy Cat Lady is here to save us from these damned Millennials! (Screen cap from the Simpsons.)

But not everyone agrees.

One member of Generation Y, D.W.,  [who wished not to give his full name for this interview] commented, “I’m 31 years old, goddammit. I figured I’d reach an age where I wouldn’t have to listen to this sort of garbage from my elders, but shit! It just keeps on happening…”

The Millennial, who claims to “work [his] ass off” and “have [his] IRA maxed the fuck out” doesn’t understand what old people are blathering on about.

“It’s just that when I was a kid I read a lot of Abbie Hoffman and Henry David Thoreau and they talked about people over 30 sort of being the establishment. And I never expected to hit 30 and still have to listen to this crap about my generation’s failings.”

The aforementioned Hoffman, whose philosophy “Don’t trust anyone over 30” perhaps seemed reasonable decades ago, has since been discredited as just another dreamer who needed a haircut.

And Thoreau, who once wrote, “Practically, the old have no very important advice to give the young, their own experience has been so partial, and their lives have been such miserable failures… I have lived some thirty years on this planet, and I have yet to hear the first syllable of valuable or even earnest advice from my seniors,” is thought of by many as being too idealistic.

“All in all, the 60s would have been much better if Abbie Hoffman had just kept his job as a pharmaceutical salesman,” says Will Cunningham, a member of the Baby Boomer generation. “Thankfully, most of the people old enough to point out the failings of my generation are dying off. And hopefully, there won’t be any more Abbie Hoffmans.”

But can we hear what Socrates thinks?

The tendency for young people to ruin everything is nothing new, of course.

Even Socrates, who could not be reached for comment, had this to say about the failings of the class of 450 BC:

“Our youth now love luxury. They have bad manners, contempt for authority; they show disrespect for their elders and love chatter in place of exercise; they no longer rise when elders enter the room; they contradict their parents, chatter before company; gobble up their food and tyrannize their teachers.”

Elderly folk in their great wisdom, it would seem, have always been exceptionally talented at finding fault with those a bit younger than them.

Of course, some in the dying old media are quick to mention that it’s not all bad. CBS reports, on 60 Minutes, that some Millennials are pretty hard working. Others, however, are “narcissistic praise-hounds.”

“When talking about a group of 80 million people, you can’t generalize too broadly,” said S.P., another Millennial who wished not to be named. “It’s just exhausting, they [Baby Boomers] think everyone 10 years younger than them is some sort of degenerate or waster.”

The same CBS report hypothesizes that all our problems can all be blamed on Mr Rogers, who – when Millennials were growing up – told them they were special.

Indeed, those born after 1980 grew up in a culture which never taught them the value of hard work, so they think that just showing up is  enough.

“That doesn’t sound anything like my childhood,” says D.W. “And I think these old farts are just pulling a bunch of crap out of their shrivelled old asses.”

In another interview, Jeremiah McGee had this to say:

“Well, of course everything’s going downhill now that you can’t beat your children!” McGee, 68, added, “Really, the problems started when women stopped being a man’s personal property. How are young people supposed to have any values if they grow up with no structure in their lives?”

Another old fart interviewed for this piece said, “You know what really chaps my hide? Now you buy something and two years later it’s useless, you gotta buy a new one.” Spitting a mouthful of tabaccy off the porch of his tin-roofed shack, he added “Why, the first TV I bought lasted me 25 years! Now everything comes from China blather blather blather…”

The phenomenon, known as planned obsolescence, was in fact invented by God Almighty. And perhaps it will someday end the Boomers vs Millennials debate for good.

In fact, according to reports, God Almighty, in his wisdom, has also designed human beings to have a limited period of functionality.

Soon, according to some predictions, cat ladies who write for Forbes and coots who chew tabaccy will die, and they will be spared from having to see how the world ends up with Millennials in charge.

And life, for Millennials, will go on.

[Several voice mail messages left for God Almighty asking for comment were unanswered as of press time. This article originally written for the Style and Society section of The New York Times by Christopher Wallace. However, The Times objected to Wallace’s use of anglo-saxon monosyllables and the article had to be published here. Long live the new media!]