Big publishing is on the way out.

I see it in English language teaching all the time.

It’s one of the mighty, sphinx-like paradoxes of the modern expat’s existence – if all my students are complaining about how learning English is so expensive, why are all my co-workers complaining about being broke? Where does all the money go?

I’d like to propose a hypothesis as to why this is the case – almost everybody is broke because 99% of people suck at business.

In any case, this week I learned that sucking at business isn’t limited to us teachers down here in the trenches.

The same thing, apparently, happens with the authors of textbooks and teaching materials.

It’s easy, from here in my unglamourous language-school life in Madrid, to imagine Raymond Murphy as a larger-than-life character like Sosa in Scarface.

Lording it over a huge estate in the tropics, with his minions (in this case Cambridge grad students) writing hundreds of examples of the present perfect every hour for distribution to all the European capitals.

Sitting poolside with a cigar in his mouth and his feet propped up on fat stacks of cash: that’s the Raymond Murphy I imagine.

And roughly three quarters of my students for the last few years have found PDFs of New Headway online, which they print out (supposedly at the office when the boss is looking the other way) and bring to class.

Sorry, Oxford University Press (and RIP to Johnny Soars, who’s like the Al Capone in this racket –where would we be without him?).

Anyway, I’ve also sold a ton of copies of English Grammar in Use through recommending it to my students. So I guess he might forgive me, if he should one day find himself slumming it with real teachers in Madrid.

Think before you Xerox that textbook

Perhaps we should think before we Xerox. Because it turns out that some textbook authors are just as broke as a backpacker at International House.

See, for example, this article from ELT Jam, which I found on twitter.

(I follow all sorts of apparently high-level EFL teachers on twitter. They use a lot of acronyms, go to “conferences,” have ELT chats, and are apparently adopting some sort of “professionally boring” persona, at least online. Could anybody really be as boring as these people appear? I doubt it!)

In the article, a textbook writer talks about a colleague’s experience confronting a “pirate” whose blog linked to pdfs of his books.

Interestingly, the author says that the book was selling pretty well, but that he only earned 100 pounds last year in royalties.

Sounds like piracy is the least of his problems. He claims to have worked on the book for three years, but then, apparently, he signed away his copyright for almost nothing.

Assuming that it’s true, I find it shocking to think that the big British universities are only paying the authors of their course materials a few cents per copy. For a textbook that costs 40 euros (which a lot of them do) where does the rest of the money go?

Dawg, where’s my cash at?

I suppose in the case of Oxbridge, it goes to polishing the marble floors in some Harry-Potteresque library. It’s hard to imagine the Dean of Oxford spending all that New Headway money on binge-drinking, hookers and blow like some Spanish language school owners apparently do.

In any case what exactly does “it sells pretty well” mean?

Writing EFL materials is not exactly the most glamourous or profitable job in the world, but please. That’s ridiculous.

As I explained in part 1 of this article, if you’re an author these days and you’re slaving away for some giant soulless corporation in exchange for a 0.45% royalty, it’s because you want to. Not because you have to.

The author of the ELT Jam article eventually says the following: “Many authors aren’t earning enough from their work, especially given the amount of time, blood, sweat and tears that went into producing it. As an industry, publishers can’t seriously expect to survive long-term on authors performing labours of love.”

What is his personal labor of love? Cambridge English for Marketing, available for just a bit more than 28 euros on Amazon.es.

You spent years on what?

I guess there are a lot of things I don’t understand about these serious, preachy, constantly outraged teachers. Because to me, slaving for years to write a textbook sounds pretty damn boring. I would have hoped that at least these authors were well-paid.

Anyway, after reading the article, I went to class, where my unemployed and underemployed students were talking about how all the summer courses they’ve been looking at are so expensive. More than a thousand euros a week for an intensive in Brighton or god knows what.

When people talk about how expensive learning languages is, I’m a bit puzzled. Because from the other side of the battlefield I see how English teachers live.

Short version of the story: mostly, we’re broke. A lot of my friends spend the summer eating beans with rice and bumming cigarettes.

So if there’s all this money in English teaching, where does it go? I guess it’s gobbled up by the sucking-at-business tax, or more likely, consumed as gin and tonics by drunken directors of studies. 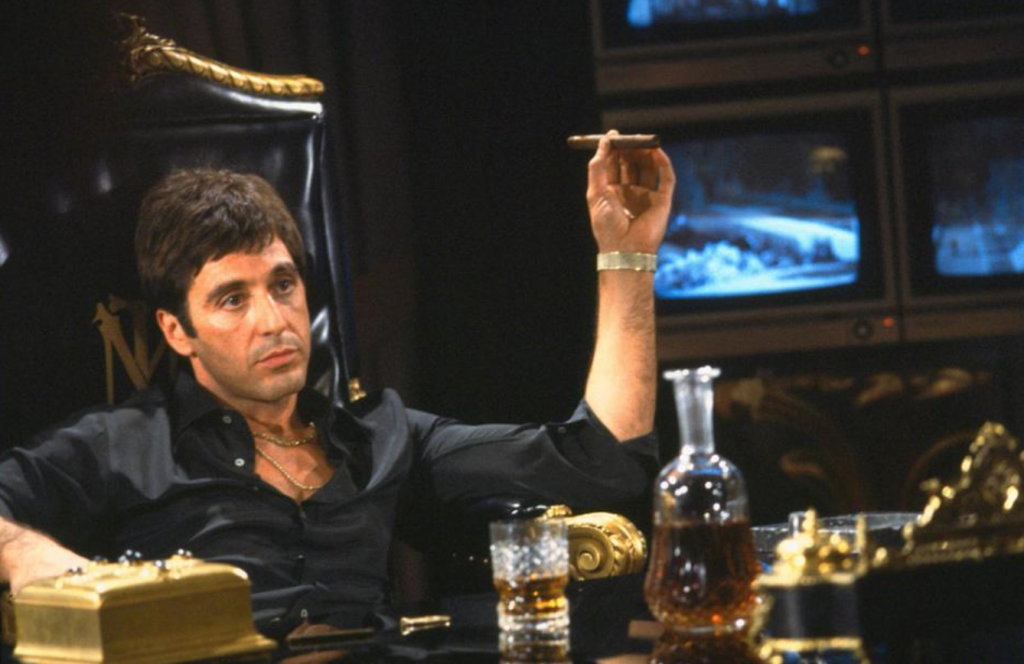 From the movie Scarface. I recommend it if you’ve never seen it.

Anyway, if Raymond Murphy is Sosa, I’ll be Tony Montana. The new guy in town with the “fuck everything” attitude. I’m cutting out the middleman, and you can buy my books for less than 10 bucks.

Self-publishing is the way of the future – if you are semi-competent at marketing, that is.

Marketing Rules Everything Around Me

Because marketing is the key to everything. These other guys sign away 98% of the profits on their book, I guess, to avoid doing the dirty work of actually selling the damn thing.

Now let’s see if big publishing – in the form of the Oxbridge textbook mafia sends their goon squad to come shoot me full of holes.

P.S. For more, check out my article about making a living as an English teacher in Madrid. Short version: It’s tough. But doable. Also, here’s how to publish a book on Amazon.