Clases de lo Social: The webseries about the awkwardness of Spanish life

Do you want a real idea of how modern Spanish life works? Check out the web series Clases de lo Social.

The story is about a high school where, instead of teaching math or history, the teachers give examples of appropriate and inappropriate social conduct, and teach their young students how to deal with awkward and uncomfortable situations with friends, strangers, significant others and in-laws.

All about Clases de lo Social

The series follows two young people – Carlos (played by Santi Romay) and Marta (played by Sabela Arán) – as they go through their day to day lives, facing a series of common social dilemmas.

Director Pablo Cacheda explains in an interview that the message is that there is no message–the situations are familiar to everyone, but in real life nobody ever taught us what to do. 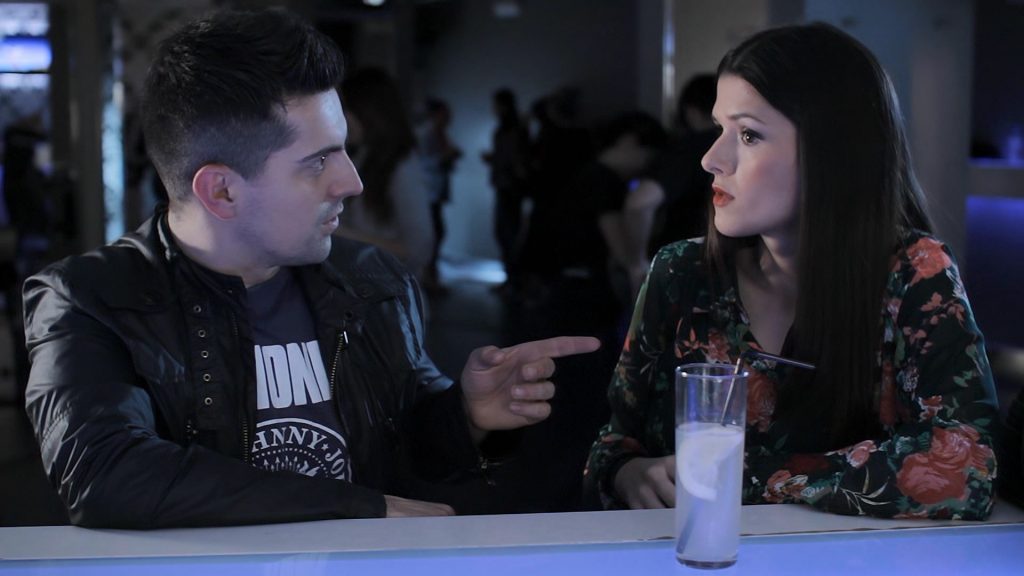 There’s a bit of comic exaggeration, but if you’ve been around a while you know that these sorts of situations can also be completely serious. And you’ve probably experienced similar awkwardness more than once if you’ve been in Spain for more than a month or two.

What do you do when you run into someone whose name you don’t remember? How do you deal with being in a tiny Spanish elevator with a neighbour you barely know? You’re in the pharmacy, about to buy a box of condoms, and the same neighbour walks in. What do you do?

All those questions are answered in the first episode: Situaciones con desconocidos.

The second episode is called Situaciones al ligar and deals with Carlos’ difficulties trying to pick up girls in bars. He’s kind of a geek, apparently, but finally he manages to get a date with Marta–just your typical Spanish girl who likes La Oreja de Van Gogh and talks constantly about whatever crosses her mind. We all know that girl.

And that leads us to my favourite episode: Situaciones en pareja. You can watch it right here:

The questions posed by this episode are extremely important: If you’re on a first date, should you invite yourself up for a romp in the hay, or wait for an invitation? How do you know if you’re “together” or not? Should you buy your girlfriend a “designer” handbag from a Senegalese guy on the streetcorner?

And most importantly, what should you do if your lovemaking is described as flojo or sutil y un poco rápido? (That’s one situation that I’ve absolutely never been in… Ahem.)

Also quite entertaining is the fourth episode, which deals with meeting the in-laws. Marta’s father, of course, is your typical old-school facha who wears watermelon-colored chinos. Because that’s how old Spanish guys roll.

And maybe you wouldn’t believe it, but yes! In the Old World your in-laws will probably insist on separate sleeping arrangements for unmarried couples. (Ask me how I know.)

It doesn’t matter that you and your significant other are 30 plus and have been living away from home for more than a decade–you still have to sneak around in the middle of the night and attempt to have sex silently while listening for daddy’s footsteps in the hallway.

Of course, you have to understand the parents’ point of view. They wouldn’t want the Pope to find out that there’s fornication going on in their house. And what would grandma think?

The fifth and final episode of the first season talks about dinners organised among friends–the inevitable dividing up of the costs, sitting at the nerdy end of the table, and some extremely awkward situations that can occur living in a small city where everybody has slept with everybody.

On being non-Spanish in Spain

In any case, do you know the best part of being foreign in Spain? Most people don’t have high expectations about your ability to fit into Spanish society, so they’ll grant you a bit of leeway in social situations.

Whereas a Spaniard couldn’t possibly leave a house party before 3 AM without pissing off his whole social network, I can leave at midnight, be on the metro and in bed by 1 AM. Because people understand. 12 o’clock rolls around, and I grab my coat. “Okay, the guiris are leaving” people say. “Cause that’s just how guiris are.”

Lucky me! My main conclusion while watching the series is, “Wow, I’m glad I’m not Spanish!”

The second season is in post-production and should be up and online in a couple of months. So keep your eyes peeled!

For more awkward situations in Spanish life, check out my article The most ambiguous sentence in the Spanish language.

Of course, it’s not all awkwardness and pink trousers. Intercultural romance can be fun, as I explained in my article 5 Reasons Why You Should Date a Foreigner.

And if you’re interested in picking up girls, you should read my classic guides (in Spanish) Frases para ligar en inglés and Como ligar con guiris.

P.S. Do you have an awkward Spanish story to tell? Well, that’s what the comments are for! Hit me up…