The King of Spain Abdicates–What Now?

Well this is newsworthy… The King of Spain, Juan Carlos I, has abdicated the throne. His son, Prince Felipe, will become King in a few weeks.

This whole situation is quite surprising–up till yesterday I would have laughed at anyone who suggested the King would step down. Even when I saw the massive headline on El País yesterday morning, my first thought was: Is this a joke? Do Spaniards celebrate April Fools’ Day on June 2?

The King’s announcement opens up a series of questions. I don’t have a good answer for any of them yet. And for most of them, only time will tell.

The first question is simply, why?

There are certainly a lot of Spaniards who should resign from public office. In recent years, corruption scandals have hit many politicians and some of the royal family. But as far as I know the Spanish mindset says that it’s better to hide behind a wall of lies, deny any wrongdoing, and hope to stay in office until the whole thing blows over. Spaniards aren’t quitters, at least when they have a cushy government paycheck and benefits.

Of course, the King isn’t officially involved in any sort of scandal. And he has been having a lot of health problems. Maybe he just wants to rest.

The second question: will there be a referendum about the future of the monarchy?

I seriously doubt it. But then again, I seriously doubted that ol’ Juan Carlos would ever step down. So maybe I’m wrong. The Constitution has a provision that allows the government to call a referendum about important national issues. I’m not sure if it’s ever happened, but there’s certainly a first time for everything.

Some people would certainly be happy to see the monarchy go the way of the dodo. About 20 thousand of them were in Sol last night. But will it really happen? 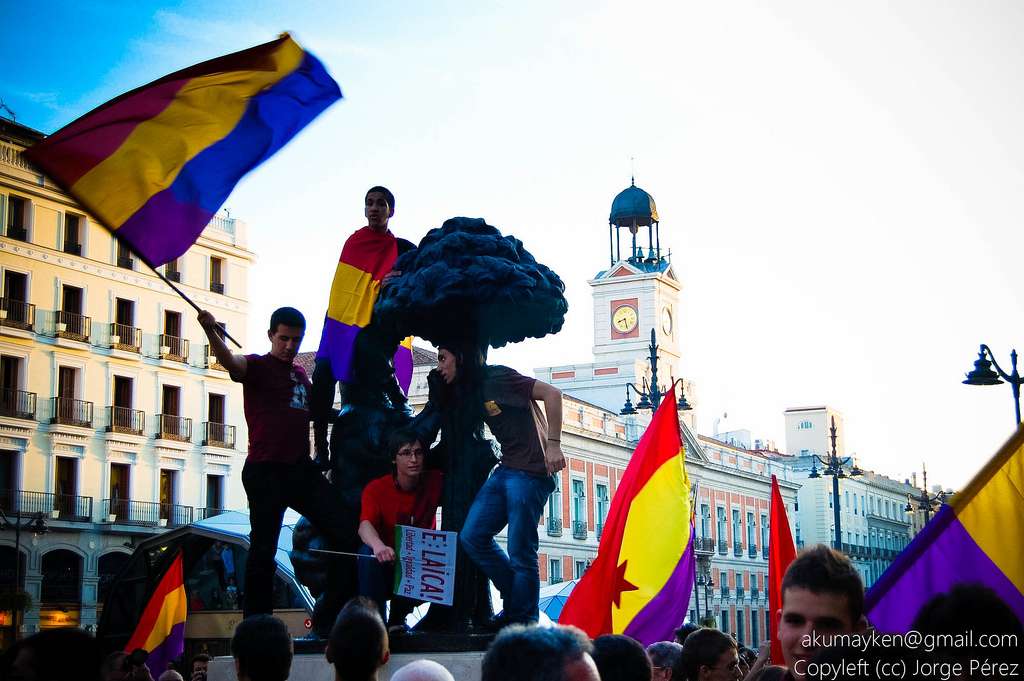 For more photos, check out Jorge Perez on Flickr.

The third question: is this, like Cristiano Ronaldo’s six pack abs, simply another trick the government is playing to hypnotise us all and keep our minds off the really important issues?

I personally don’t think the government is hypnotising anybody, but some people on twitter seem to think this is just another ploy. I personally won’t be wasting any time watching a coronation ceremony or tearing up about how Princess Letizia has been able to go from journalist to Queen and how cute Spain’s new power couple is going to be cutting the ribbons on public swimming pools or what have you.

Of course, there are many other questions posed by this whole situation–

What will happen to all the 1 and 2 euro coins that currently have Juan Carlos I on them? Will they be recalled in favor of a new Felipe VI edition?

Will the former King and Queen keep their current salaries, or will Queen Sofia end up washing dishes and sweeping stairwells to make ends meet?

How far are they going to take the “modernisation of the Monarchy” thing? I can just picture one of the Infantas deciding to become a pop star–like the next Paris Hilton.

Finally (and perhaps most importantly) will English teachers get a day off for the coronation ceremony? I guess they declare public holidays for royal weddings and such. So, the transcendentally important issue of the day is: will I get an extra day to drink beer and watch South Park out of this?

Only time will tell, but they’d better work fast, because soon I’ll be on vacation anyway. And declaring a public holiday while I’m on vacation would be totally lame and redundant.

Well, this has been your bi-weekly dose of social commentary from the guiriverse. Be safe out there, kids!

Reporting live from my sofa,

P.S. It took me quite a bit of restraint to avoid using a title like Holy Fucking Shitballs: the King Has Abdicated! for this post. But I’m going to put it here at the end anyway, because that’s how I roll.

P.P.S. What do you think about the whole thing? Leave me a comment!